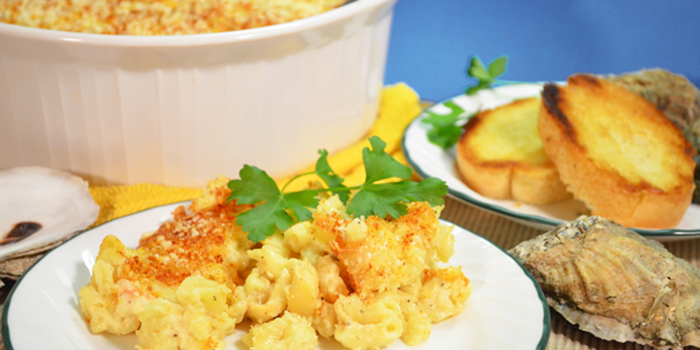 Nothing calms my soul more than walking barefoot along the coast of North Carolina. Even though I don’t spend much time at the beach, I still enjoy each and every visit. I could just sit, watch, and listen to the waves rolling in for hours.

Of course, every visit to the coast requires a few trips to enjoy the delicious bounty that the ocean provides. I have a couple of favorite seafood restaurants and really enjoy the Calabash-style of lightly battered and lightly fried shrimp, fish, oysters, and deviled crab. Even after spending a few years working in the kitchen of a seafood restaurant, I still love a good plate of seafood with coleslaw and baked potatoes.

Seafood mac and cheese may not have been something that Mama prepared as I was growing up. On the other hand, macaroni and cheese was the first dish that I learned how to cook. Yes, it came out of one of those blue boxes with the little powdery pack of cheese flavoring, but to me, I was cooking.

Mama taught me how to prepare the macaroni in the boiling water, and then stir in the butter, milk, and the little packet of artificial cheese, because it was one of her favorites — at least she said it was. She worked just about a block from our house and often walked back home for lunch. During the summer months, she would let me cook up the blue boxed macaroni and cheese a couple of times a week for her. She ate it, whether it was really her favorite or not.

The really great thing about this recipe for seafood mac and cheese is that you can use your favorite seafood and/or seafood combinations to make it your own. I’m using crab meat and shrimp, but scallops, even oysters, would make it just as tasty.

Of course, seafood costs quite a bit more these days than it did when I was in the restaurant business. I thought shrimp was expensive back then, but I just paid $12.50 for one pound of frozen shrimp this week to make this recipe. I only used half a pound, but you could easily add more if desired. Even imitation crabmeat would work if you like that. There are lots of possibilities with this one.

Ready to bring back some seaside memories? Alright then … let’s get cooking!

If you’re using shrimp, you’ll want to peel and de-vein the shrimp first. Rinse them well, place them in a bowl, and refrigerate them until called for in the recipe. These larger shrimp were the only fresh shrimp I could find locally at this time of year. The smaller popcorn shrimp would be better suited for the recipe, but I’m going to chop this up into smaller pieces a little bit later.

Prepare the macaroni according to the directions on the package, then drain them in a colander.

Once drained, I just placed them back in the pot that I cooked them in. A large bowl would work just as well, but why mess up another dish? The noodles are still hot, and no, I didn’t rinse them. Just in case you were wondering.

Add the sour cream. Stir it well, making sure all the pasta is coated.

Add the crab meat. I’m using clump crab meat in a can, but use fresh if you have it. Experiment around and find what you like best.

Stir it all up again to fully combine everything, then set it aside for the moment while we prepare the other ingredients.

Chop up the spring onion into some very small pieces. I’m just using one, but you can certainly add a little more if you wish.

Grate the block of white Cheddar cheese. I prefer using the block cheese and grating it myself. It seems to melt a little easier, and you don’t get all that powdery stuff that comes on the pre-shredded cheese. Set this aside for later.

Grate the mozzarella cheese while you’re at it. Set this aside.

Place a skillet over medium heat on your stove top. Add the butter and let it melt.

Toss the shrimp into the skillet. Stir and flip the shrimp for about two minutes, until they start showing good color. Then, remove them from the pan and let them cool. We’ll chop them up once they cool down a bit. Resist the urge to eat them just like they are, though; it’ll be hard, but you can do it.

Add the chopped onion to the butter remaining in the skillet. Stir it around for a minute, letting it cook until tender.

Sprinkle the flour around the skillet. Start stirring immediately so it doesn’t burn. I dropped the heat down a notch below medium. Stir the flour and onions together and let it cook for about one minute. The flour needs to cook a bit to remove the flour taste. We’re making a bit of a roux.

Gradually add the milk, and keep stirring constantly. As long as you keep stirring, you shouldn’t have any lumps forming. Continue to stir the milk until it starts to thicken a bit.

Start gradually adding the white Cheddar cheese to the milk in the pan. Keep stirring, scraping the bottom to prevent the cheese from sticking and burning. Continue adding the cheese until you’ve got it all mixed in. When it’s fully melted, add the cheese mixture to the macaroni in the pot.

Chop up the cooked shrimp. Don’t chop it too fine — leave it in about half-inch-size pieces.

Stir the melted cheese into the macaroni, then add the shrimp and stir well.

Taste the mixture to see if it needs any salt or black pepper. Season to taste.

Generously butter up a 2½-quart casserole dish, or something similar. Spread the macaroni and cheese mixture evenly in the casserole dish.

Place the dish in your oven and let it bake for about 20 to 25 minutes at 350°, or until lightly browned on top.

Everything in the dish is already cooked; we’re just letting the mozzarella cheese melt on top and slightly browning the bread crumbs. Remove from the oven when done, set on a wire rack or pot holder to let cool a little.