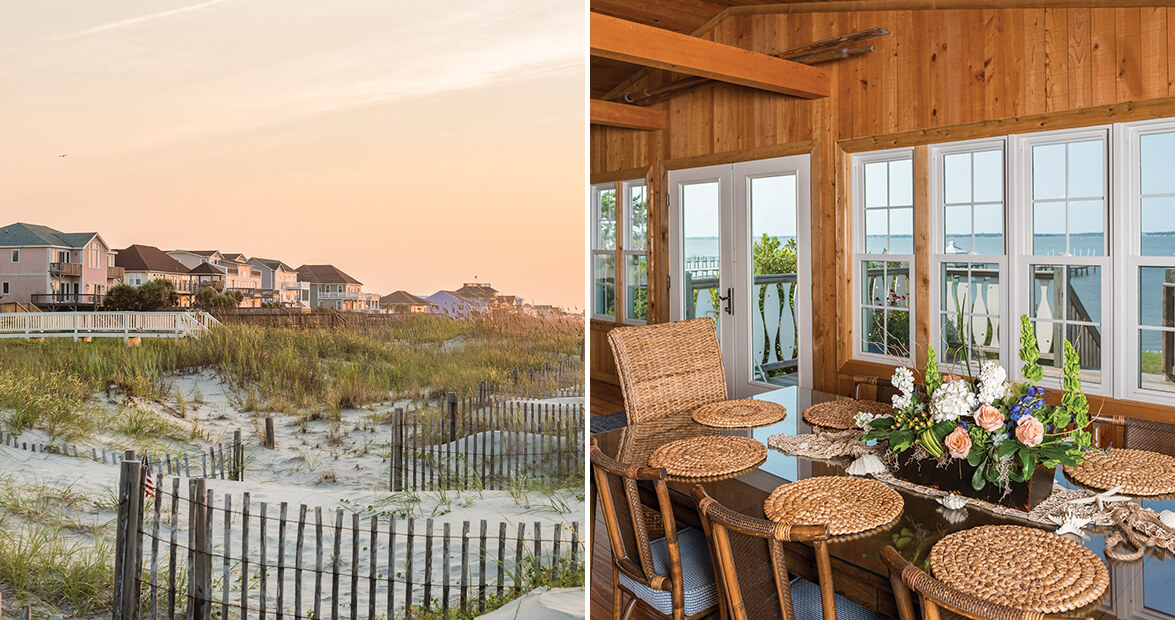 It was the late 1950s, and Clarence and Mildred Simmons just wanted to do a little fishing.

They lived in Winston-Salem, but they’d fished up and down the North Carolina coast. They were looking for the perfect location to spend a retirement that they anticipated would be filled with fishing and relaxation when they accepted an invitation from a friend, Oma Russell, to visit an undeveloped area on Bogue Sound.

Just a few years earlier, in 1953, a group of investors, including William Britton McLean and George F. Spell, had pooled $350,000 to buy what was essentially a maritime forest. There were no T-shirt shops, no grocery stores, and no roads that extended past Salter Path. This, at the time, was Emerald Isle, unnamed and untamed.

There was something about the unspoiled beach area that the Simmonses loved. They stayed for the weekend, walking over the dunes to cast for bluefish and flounder. At the end of their visit, Mildred paused at the screen door.

“We’ll be back,” she told her friend.

By 1960, the Simmonses had bought a cottage in Emerald Isle. Unbeknownst to them, McLean and his co-investors were creating the quintessential North Carolina beach town. They weren’t engineers, but they were of an era when people didn’t stop doing a thing merely because they didn’t have any expertise. “Dad never had an architect,” says Paxon Holz, McLean’s daughter and one of the pillars of the Emerald Isle community. “They drew up their plans for the Islander Hotel on a paper bag.” 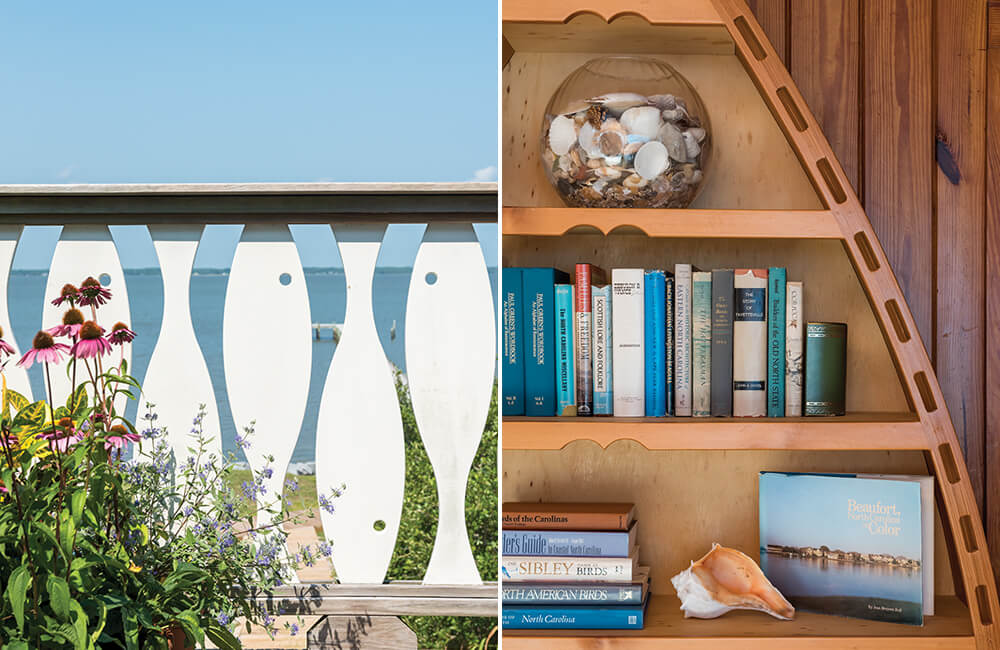 The seven-person group divided their purchase into 54 blocks of oceanfront land, 1,100 feet wide apiece. They drew numbers to determine which blocks were assigned to each investor.

Certain blocks were reserved for limited commercial development. Most were residential space. “That planning at the very beginning,” says Julia Batten Wax, the niece of Clarence and Mildred Simmons, “is what prevented Emerald Isle from becoming a hodgepodge like many other beach towns.”

But first the area needed a name. Emerald Isle was almost called Gulf Stream Beach, until a consultant flew over the undeveloped land. The green forest and the blue water looked like a gem, and it’s been Emerald Isle ever since.

Before Batten the Breeze was added to Emerald Isle Realty’s stable of some 600 cottages, it was simply the Simmonses’ home.

The name fit perfectly, but the timing was not always impeccable. Hurricane Hazel hit the coast in October of 1954, slicing the island at two different locations. “They sold oceanfront lots for $1,500 after Hazel,” Holz says, “and they were lucky to get that much for them.” Those same oceanfront lots today would approach seven figures.

But not everyone wanted to be on the ocean. Tourists appreciate the convenience and view afforded by oceanfront properties, while generations of Emerald Isle locals have preferred the privacy of and sunsets over the sound.

That’s where the Simmonses bought the cottage that is now known as Batten the Breeze, either the first- or second-oldest cottage on Emerald Isle, depending on who’s telling the story. They hosted friends, just as Russell had done for them. And those friends often ended up buying cottages nearby. 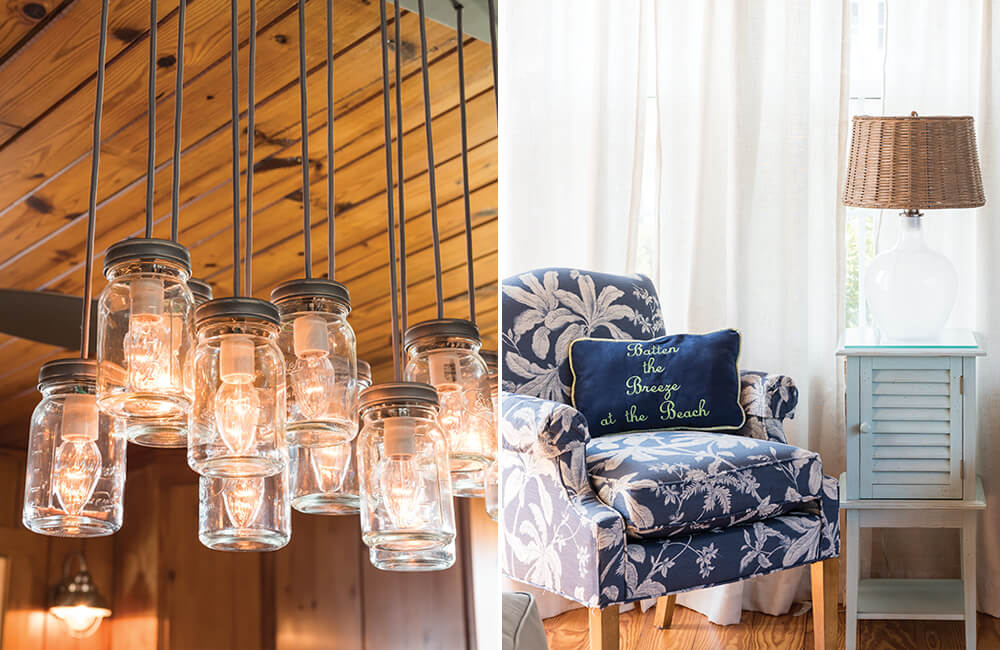 Left: Mason jar lights that look like they could’ve once held a batch of 14-day pickles. Right: A sunny spot to read or relax. photograph by Emily Chaplin

Then those friends would ask Clarence and Mildred to handle the logistics when their friends visited. And by 1962, Emerald Isle Realty was born in the Simmonses’ converted garage at the corner of Second Street and Emerald Drive.

The Cameron Langston Bridge was completed in 1971, making Crystal Coast beach vacations significantly easier. And although families have been crossing that bridge for more than 45 years, Emerald Isle still retains much of the character that was first sketched on that paper bag after World War II. Roads were named after people whom the developers knew — Joel Lane, Edna Street, and Bryan Street. Across the water in Cape Carteret, Taylor Notion Road — right off W.B. McLean Street — is so named because it was Mr. Taylor’s notion to build a road there. There was once even a Paxon Street.

Wax grew up spending summers on the island while it grew up around her. Some of her best memories are of running in from the sound at Batten the Breeze, tracking the sand onto the cottage’s pine floors. Those floors still remain, as does the doghouse that now marks the final resting place of Sophie, the family’s beloved dachshund that died in 2003.

Every week during the summer, Wax — now the owner of the family business, which has since moved out of the converted garage and into a larger office space on Emerald Drive — watches as the town’s population swells from a year-round total of 3,800 to a summer peak of 40,000. Her family isn’t all that different from the other families that populate the Bogue Inlet Pier or walk down to the point to watch yet another breathtaking sunset.

The current mayor, Eddie Barber, is a longtime Methodist minister who moved to Emerald Isle from the Siler City area 24 years ago. In the days leading up to Memorial Day, Barber knows his town is about to gain tens of thousands of temporary residents who’ll move in and out every Saturday through Labor Day.

“What I love to see is how many families are coming back year after year,” he says. “They come the same week every year. We’ve always wanted to have that small-town beach flavor. It’s a vibrant beach, but we’ve tried to have that good, quality growth. It’s still very much the same beautiful place that it’s always been.”

Wax spends her summer Saturdays arriving at the office early, in time to help with checkout for the families leaving the island, and check-in for the next wave of beach vacationers. Emerald Island Realty remains a family business. Among the multiple members of the family involved on a regular basis, you might find 17-year-old grandson Mark in the tiki hut, assisting with check-in, or the even younger grandchildren stuffing key packets.

By the time the process is finished on a Saturday afternoon, and the island is filled with families back in their familiar beach rhythms for their favorite week of the year, the Wax family has begun their own Saturday tradition. As many as a dozen family members gather at the family home on the sound, cooking and telling stories and enjoying that same coastal breeze that hooked Clarence and Mildred more than 50 years ago.
“The particular joy I have in this being our family business is that every week we get to see people who have that genuine excitement in their eyes to be back on Emerald Isle,” Wax says. “We get to hear their great stories about why this week of the year is so special to them. And our family understands that, because it’s special to us, too.”