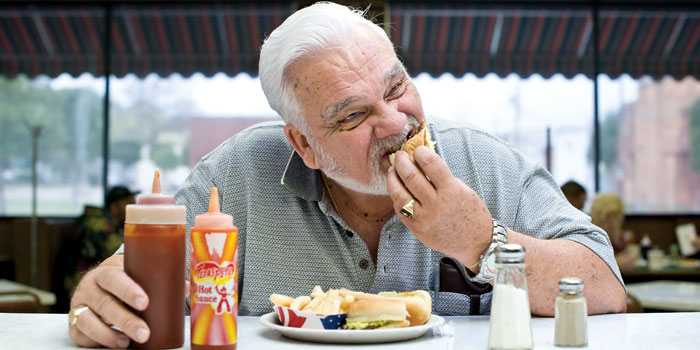 Editor’s Note: This story was first published in June 2011.

Last year, when Roanoke Rapids residents voted for the Scrooge of the Year, Danny Haislip won hands down. It wasn’t even a contest, really. If they do it again next year, he says, they need to get some competition.

But every day, people flock to Danny’s place — Second Street Lunch — the brick building on the corner of Hamilton and East Second streets, with the tinted windows and striped awnings. They understand the gruff 71-year-old seaman with a scratchy beard and gray hair. They know the rules.

Best in the valley

Second Street hasn’t changed since 1965, when Danny took over for his father, Bill, who started the restaurant in 1949. Danny buys fresh hamburger, anywhere from 30 to 50 pounds, every day from Elias’ Butcher Shoppe on 10th Street. He purchases 35 to 50 pounds of cabbage that he turns into six or seven gallons of sweet slaw. The thin, mild chili is made fresh every day. Last year, the local paper pronounced Second Street’s hot dogs and burgers the best in Roanoke Valley.

Brenda Williams knows the routine well. She’s been a waitress at Second Street for 34 years, since she was 17. She’s a waitress, but she also cooks, busses tables, and collects the money. All the waitresses do. They always have. That’s the way Danny likes it.
Brenda walks over to a table of regulars, notepad in hand, her blue apron already stained with chili and the lunch rush hasn’t even started. Along with their order, she discusses local Girl Scouts cookie sales and lets them know she helped a troop sell 32 boxes.

“I like it,” she says, beaming. “I like dealing with the public. I have the same customers that wait on me to take their orders. That makes you feel good.”

Brenda scurries behind the counter to prepare their food. She throws thin patties on the flattop grill. She beats them with the edge of the spatula — a rhythmic sound that echoes steadily throughout the building.

Some patrons insist certain waitresses make the food different ways. One brave man even told Danny that his father made better burgers than he does. But you won’t convince Danny. “It’s just your taste buds,” he says.

Danny’s father ran the business, and he could cook, but Danny got his culinary skills from his mom. “I would help mother cook Sunday lunch in order for me to hurry up and be able to get out of the house,” Danny says, “’cause I always wanted to be out and doing something else. But I enjoy cooking, especially when people eat it and act like they like what they’re eating.”

Yes, the Scrooge likes it when his customers are pleased. That’s one reason Second Street Lunch serves both Coke and Pepsi. Customers can order a fountain Pepsi in a plastic-foam cup or an 8-ounce Coke in a glass bottle. Whichever they think goes best with their burgers.

Danny has a ready answer every time the soft drink companies ask him to sign a contract. “I don’t let people dictate to me what I sell,” he says.

When the credit card company told him they could make his business more efficient, he had a quick response for them, too. They told him they’d have the money in his bank account within two days. “I’ll have my money in my hand before they leave,” he said.

Danny doesn’t like things to change, and neither does his son, Greg. That’s why Greg and his wife, Vickie, come down to Roanoke Rapids several times a week from their home in Richmond, Virginia. They’re learning the business, so they can take over for Danny when he retires.

“I’m just trying to get back home,” Greg says. “It started in 1949, and Granddaddy did it. Daddy did it. It’s just part of the family. No one else needs to be taking it over.”

“When people come in here, and they’re talking about it, it’s like they’re coming home,” Vickie says. “It looks the same. It tastes the same.”

Three ladies sit around a table sharing pictures and swapping stories. They remember Danny’s parents running the business. They talk about their days at Roanoke Rapids High School, just down the street, in the mid-1960s when the Key Club ordered food from Second Street as a treat for its members. They chat with Brenda, who knows their orders by heart — burgers, full-dressed.

“You really haven’t arrived anywhere if you haven’t been insulted by Danny,” Joan Perkinson says. “Everybody knows you just take it. It’s OK. His bark is worse than his bite, I guess.”

When the ladies know of someone who can’t make it to Second Street, they bring them hot dogs and hamburgers. Danny insists Second Street is an international business because he’s sent care packages to Italy and Germany.

Before Greg began making frequent trips, he encouraged anyone heading toward Roanoke Rapids to bring him back a care package.

It’s that familiar taste, that combination of chili and slaw, that just tastes like home.

“That’s what makes a lot of people around here prejudiced,” Danny says. “They grew up on it. And I understand that; I do.”

Although Danny displays a “Bah Humbug” plaque on his wall, he has a soft spot.

When he coached Greg’s baseball and football teams, he often picked up kids who had no ride to the ball field. In 1988, he took up shagging because it was something he and his wife, Ann, enjoyed doing together.

He insists he was nice in 1965, when he started. Years of opening a restaurant at 5:30 in the morning and going home every night exhausted and smelling like grease harden a man. So Danny has a shell; that’s how he gets through the days doing the same thing six days a week at Second Street Lunch.

But if you get to know Danny — like the locals who come in every day to order a burger full-dressed, the Roanoke Rapids alumni who hold their class reunions at the restaurant they remember, and the college students who stop by Second Street Lunch even before going home to see their parents — you understand that he only picks on the ones he likes.