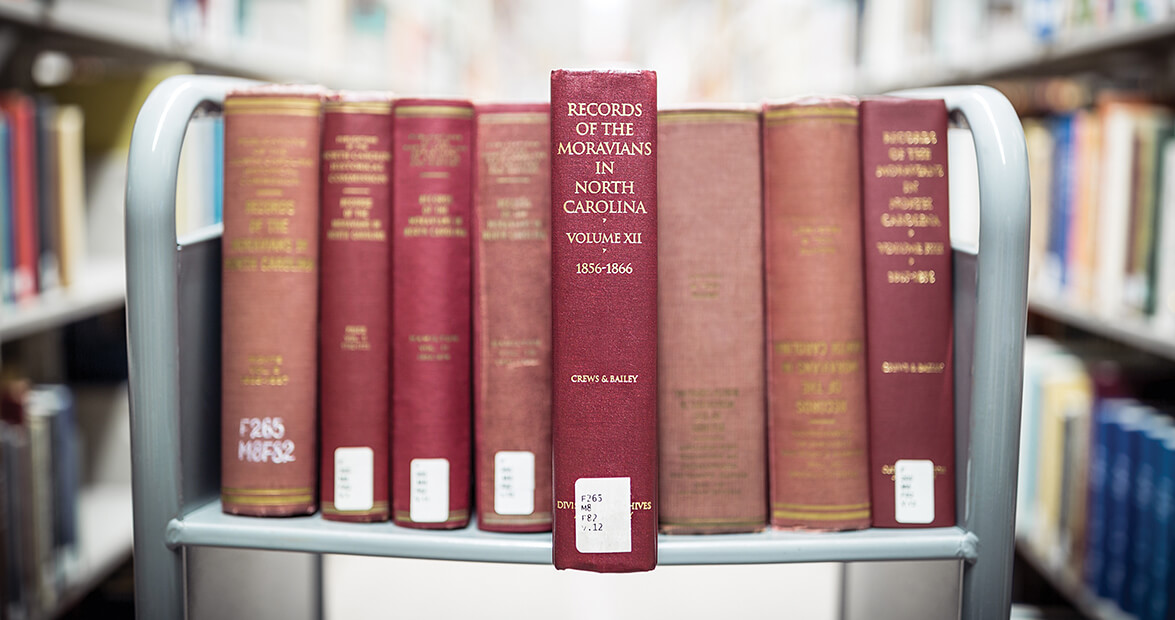 It’s a three-floor elevator ride, up the south book stack tower of NC State University’s D.H. Hill Library, headed for the dim corridors of the past. The elevator doors slide open to let in a rush of air tinged with the heady aroma of degrading binding glues and yellowing paper. A few years ago, chemists parsed the molecular basis for “old book smell,” and linked certain aromatic elements to volatile organic compounds off-gassing as glues, inks, and papers age. The telltale vanilla notes come from the breakdown of lignin in old paper. The almond undertones I pick up in the book stacks are from worn-out benzaldehyde, nothing more. I breathe it all in, square my shoulders, and start walking. Stay focused.

I push past the Registry of the Kentucky Historical Society and Vietnam River Warfare 1945-1975 and Confession From a Jericho Jail. No time for you today. Tall metal shelving extends for what seems like infinity, book spines like a giant spice rack. The titles snag me like briars, but I shoulder through the thicket. Plutarch’s Lives of Illustrious Men. The 48-volume collection of Horace Walpole’s Correspondence. The Scottish Journal of Theology. Nope, nope, and nope. Keep walking.

Halfway down the corridor, I find what I’m looking for. The books are at knee height: Library of Congress classification F265.M8 F82. Burgundy covers with simple gold type. I pull the first of the series from the shelf and turn it over in my hands:

This could take a while.

I discovered the Records of the Moravians a few years back, while researching a couple of oddball topics — passenger pigeons and the deerskin trade in colonial North Carolina. I have a strange affinity for really old books about really old times, and when it comes to North Carolina, there aren’t many better than this massive account of the state’s Moravian community — from the arrival of the first congregation in 1753 to the 1920s. The Moravians were ardent chroniclers, and this near-daily diary numbers more than 6,000 pages in 13 volumes. The entire archive — which includes more than 1,600 titles, and more than a million pages of handwritten documents — is housed in Old Salem, but you can find at least a part of these first volumes in most larger libraries.

But be forewarned: This is perilous travel, pilgrim. If you’re not careful — and I rarely am — Records of the Moravians will suck you into a wormhole of history and spit you out ragged. I start with a targeted research topic, say, I wonder if there were any problems with mountain lions back in the day. But then I trip over some reference to one of the brethren making molasses and I have to read that, then all of a sudden 60 Indians show up for dinner in Bethania, and … now I’m in the rabbit hole.

May 12, 1756. Little Anna Johanna Krauss was baptised. Bless her heart. She had been born the previous night.

February 17, 1781. This was a hard day, and the powers of darkness made themselves felt. You can feel the anguish in those simple words, and the faith of a higher power still.

August 11, 1763. Skit Moore and a company of hunters made much disturbance in our Tavern this afternoon. But what would you expect of some fellow named “Skit”?

May 21, 1816. Br. and Sr. Bagge had fright and sorrow today when their youngest daughter, Lucinde, stuck her hands into a container of hot ashes, and was so badly burned that the first joint on each finger had ultimately to be removed. Are you serious? Not sweet little Lucinde. What happened next? Did she overcome, marry, live happily ever after?

I couldn’t tell you. But I do know that in 1824, the owners of bulls in Salem were asked to keep them off the streets, and some guy got bitten by a venomous spider and his face swelled up so much that he couldn’t see out of his eyes.

Another morning, three plows were stolen from the fields.

Really? From the Moravians? Come on, people.

The spring of 1762 started off rough: A rash of rabies that felled a favorite mare ushered in a grim day on May 17, 1762, when most of the Brethren and Sisters were bled.

What?! Bled? You mean, slashed with a knife? The whole town?

When I crawl out of the 18th century three hours later, I’ve stood up my wife, Julie, on a lunch date and now owe $4,000 in Hillsborough Street parking fines. I have learned nothing of mountain lions.

That’s what can happen — what has happened. So I steel myself, blow dust from the top edge of the pages, and breathe in the moldering scent of an old book overlooked too long. Hint of dying rose and old honey. I settle into a study carrel with a chipped Formica desktop and old chewing gum stuck to the chair seat. Who knows when I’ll wander back to the 21st century. 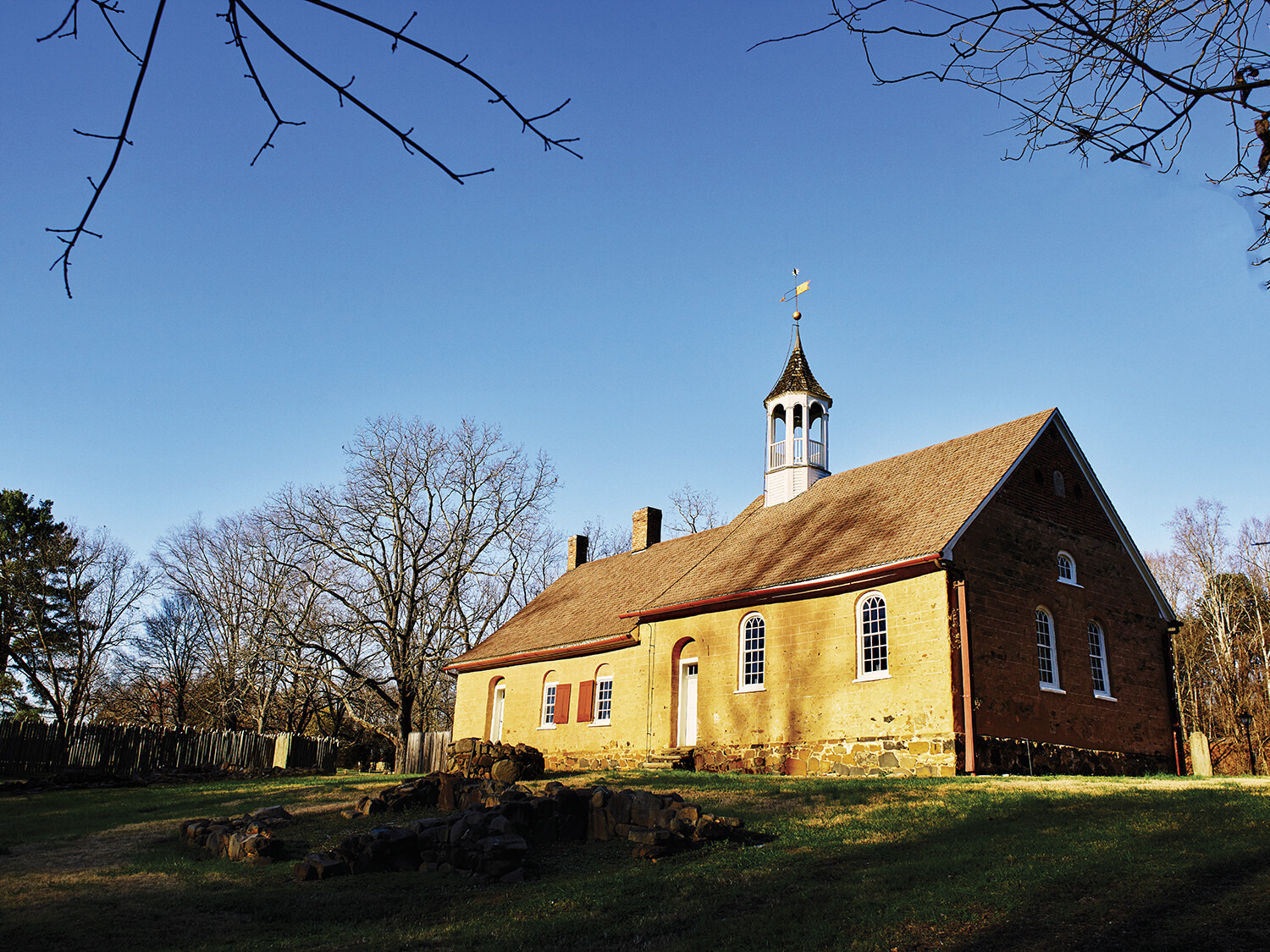 Cryptic, obscure, and plain ol’ weird connections are the hallmark of much historical research, and when I’m deep into this kind of reading, my antennae seem acutely tuned to connecting other oddball Dot A’s with disparate Dot Q’s in the craziest ways. Just the other day, we stopped with our son, Jack, and a buddy of his at the Mebane outlets. Julie insisted on a visit to the Yankee Candle store, and as she waxed over candles scented with harvest-this and spiced-apple-that, Jack’s buddy made a startling announcement right there in the middle of the parking lot.

You could have knocked me over with a Moravian sugar cookie. I wanted to hug the boy. For a moment, a scene played across my mind: It was the night of November 17, 1753, the first night the first 15 Moravian colonists gathered around a fire at Bethabara. As they sang — We hold arrival Lovefeast here, / in Carolina Land. / A company of Brethren true — wolves howled beyond the firelight.

But then there was another scene, just a few days later, that reality-checked my hope for a new generation. Jack had been fretting about finding enough primary source material for his History of the Americas project, and we’d made plans to hit the D.H. Hill book stacks together. I’d giddily told him about Records of the Moravians, and how he could find tons of stuff on North Carolina Native American tribes packed in those pages, and I was stoked about a little father-son visit to one of my favorite few feet of metal shelving. But that night, he texted me from the great distance of his upstairs bedroom and said he was scratching the library visit. Thanks, but no thanks, Father.

“How did you find all those primary sources lying up here in your stupid bed?” I asked.

Jack spun his laptop around, and scrolled down screen after screen of digitized documents and scanned photos from a million years ago.

“There’s nothing to it, Dad,” he said. “You just gotta know where to look.”

Deflated, I descended the stairs. Sure, I knew where to look online. But there was no smell at all of old musty books, no hollowed-out quiet that can only be heard in the far recesses of a library. Welcome to the future.

The historian responsible for the first transcriptions of those old Moravian records was Adelaide Fries, a devout Moravian born in Salem who was challenged by her father in the 1890s to learn to read the nearly inscrutable longhand German script of the original journals. Fries dedicated her life to the effort, traveling worldwide in the herculean task of translating thousands of pages of 150-year-old script. On the frontispiece of Volume One, she dedicates the effort to her father, “my comrade,” she wrote, “in the silent places of historical research.”

But up on the third floor of D.H. Hill, those places don’t seem so silent to me. I pull down volume after volume of Records of the Moravians, and turn pages brittle with the years. Wolves howl. Barn rafters splinter and fall. Wars rage and crops fail and lost children cry in the night. Prayers are lifted. Babies are born. Life is lived in all its chaotic, yellowed, vanilla-scented cacophony.