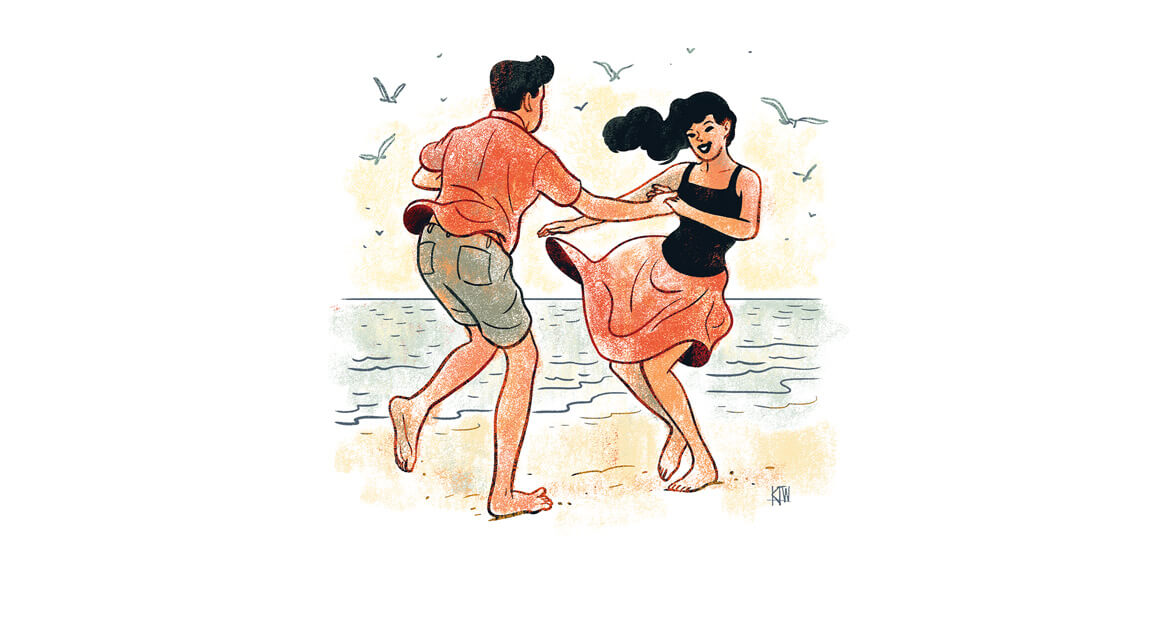 I’ve never been much of a formal hoofer; I’m more of a stoic observer, drawn into the fray when all other options (and excuses) have been exhausted. I grew up in the southern Appalachian Mountains, in western North Carolina, where we were taught to clog and buck dance, accompanied by the chunk of a guitar or fiddle or banjo, the tempo sometimes set by a washboard. The first people I ever watched shag were all the rich kids at our high school dances, who played tennis and golf, wore white pants, and had yuppie sweaters tied in perfect loops around their necks. And those sweaters never moved as the boys swanned around their girls and glided them in and out like curvaceous yo-yos, the girls’ pleated skirts popping open like umbrellas, then settling, and somehow they always knew the right time for the curves to intersect in a sweet palm touch, heads tucked in opposite directions. Away they swayed, back to the endless loop, with the girls’ skirts opening and closing as they spun like propellers. These were people who didn’t have many dings in them, yet all the bells seemed to go off when they hit the dance floor. The Shag is like a tango without the gravitas, and if performed correctly, can seem like a waltz on steroids, with soulful horn punches from the brass section swooning into the groove.

“Carolina girls, the best in the world,” sang General Johnson and the Chairmen of the Board, swinging in sympathy with the horns, “sweet Southern pearls.” I can’t even hear three bars of that song without smelling salt water and cocoa butter tanning lotion, without seeing the tide tag around the legs of a pier. “Be young, be foolish, be happy,” asserted The Tams. And The Embers’ anthem, “I love beach music; I always have, and I always will,” pointed out a lifestyle and an unparalleled optimism that could only come from long walks on a warm, secluded beach with your new love a secret, and the ocean spreading away from the evening’s crackling fire, a keg of beer sideways in the sand. The Carolina Shag is certainly the offspring of the beach music tradition, merged with a healthy dose of Motown, and even as a mongrel form, it’s still more intimate than the singular dances of the ’60s surf variety. The Watusi, the Mashed Potato, the Twist, the Monkey, the Jerk, the Hully Gully, they were conducted apart from your mate, in the wildest manner possible. Shag partners are in constant thrall to one another, in a pocket of shared rhythmic lunge and parry, reacting to the beat in one move, and anticipating it in the next.

Good ol’ Wikipedia says that the basic step in the Carolina Shag is “a six-count step danced in a slot.” The rhythm is similar to a six-count swing in that it’s triple step, triple step, rock step. The term “Carolina Shag” is thought to have originated along the strands between Myrtle Beach, South Carolina, and Wilmington during the 1940s, an area variously known as Ocean Drive or Cherry Point, depending on your location and neighborhood. According to Bo Bryan, a Carolina Shag historian in Beaufort County, the term was coined at Carolina Beach. The Carolina Shag is believed to be a descendant of the Carolina Jitterbug. But in truth, the Carolina Shag often bears only the faintest resemblance to other dances that share the so-called shag designation. The first shaggers started their motors in the 1920s and perfected the more aggressive style during the Swing Era of the 1930s and ’40s. But after that, its transmogrification into a beach dance was completed on the shores of the Carolinas.

As an adult, I’ve learned a few dance steps. I can tiptoe a mean rumba box and can perform a serviceable waltz. And I’ve learned to appreciate the Carolina Shag, able to meander through it with a willing and patient partner. It’s a lovely thing to behold on a dance floor full of competent and generous couples, who share the same space with precision and grace. I was reminded of this last spring, after speaking in Augusta, Georgia, at the Augusta Literary Festival, when I headed downtown.

I followed my nose to one of the oldest institutions in that part of the world, the Partridge Inn, with its classic stacked verandas and columns, surrounded by magnolias. Sitting there with my bourbon, I watched a beautiful marriage party crank up The Tams and begin to shag, brothers and sisters who had practiced for hours together at home, tentative members from different families thrown together for the occasion, preschoolers surrounded by parents with cell phone cameras, or older parents who’d lived through the ’50s and still remembered. I was reminded of the great dance scene at the beginning of the movie Heaven’s Gate, when the Harvard class of 1870 had tumbled from their graduation hall and were waltzing on the green, dozens of couples in petticoats and lace, top hats and tails, turning and turning in their close-knit gyres. Here, in a pink ballroom, the couples laughed and swirled in tuxes tucked against chiffon bustiers, white and black blossoms spinning on a quiet forest pond, practicing the old Southern wisdom of shared restraint in this 21st century, where all the rules have been thrown out the window, and yet, somehow, on this crowded dance floor, nothing whatsoever had changed.