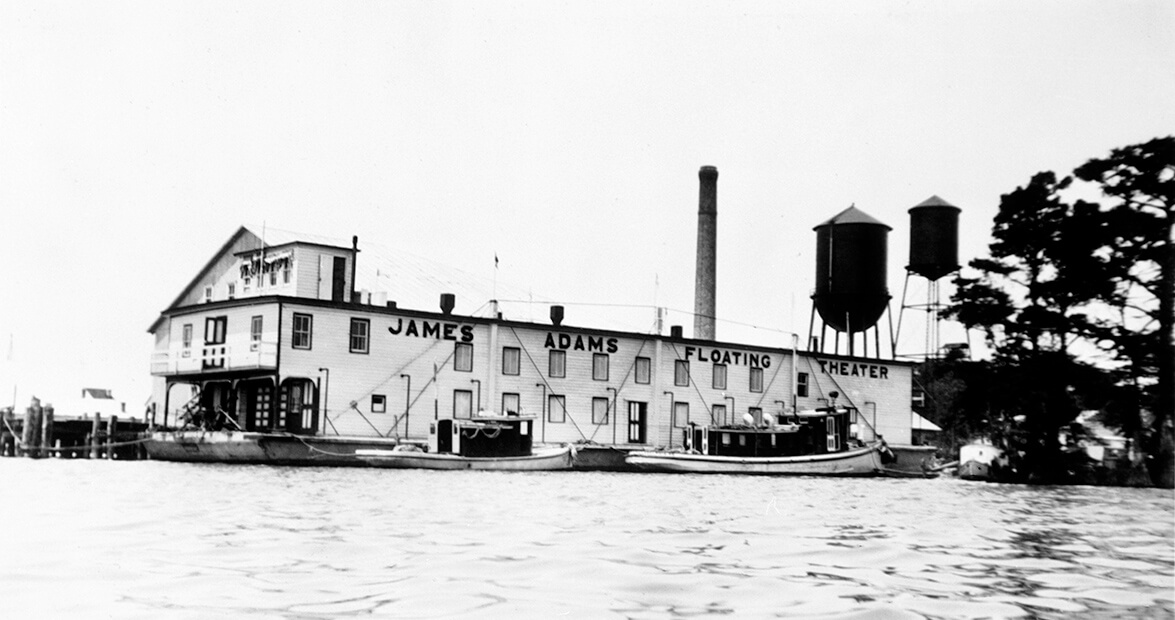 What a grand commotion, what a joyful noise to hear once a year sometime between March and November: the low thrumming of a pair of tugboats guiding a huge floating theater up the river — your river — their engines echoing up streams and through lowland swamps well in advance of their arrival. You saw the heralds, the handbills, in advance — you knew it was on the way, bringing a week’s worth of shows to a landing near you.

This year marks the centennial of the first season of the now legendary North Carolina-built James Adams Floating Theatre, a 700-seat maritime music-and-melodrama hall, put together like a gigantic houseboat in Washington in 1913, and set off trouping for the first of its 28 seasons in 1914. Perhaps even more thrilling than hearing it approach would be to find oneself a member of the company, to be one of the children of paradise who went gypsy-souling their ways into the hearts of sound-country people up and down our waterways 80, 90 years ago, and more.

In 1913, a pair of successful circus trapeze artists, James Adams and his wife, Gertie, laid down $8,941.42 to get a Washington boatbuilder to outfit a big, 128-foot-by-34-foot lumber barge as a floating theater. The next year, with the aid of stage director Charles Hunter and advance man Harry Van, the Adamses engaged professional actors and actresses and that pair of tugboats (Elk and Trouper) and, starting with a late-February tryout week in river port Elizabeth City, boomed up a 40-week tour that carried them and their troupe to Hertford, Edenton, Plymouth, and Columbia, then north to South Mills; Deep Creek, Virginia; and well beyond — 15 Virginia and 21 Maryland communities in all.

James Adams liked working with his near kin: Charlie Hunter married Adams’s younger sister Beulah, who became a popular leading lady, and, after a few years, Adams’s brother Selba and his wife, Clara, ran the floating theater’s business side. They were a close-knit family working in close quarters, and, as to the show people they hired also being a family (husbands and wives, single men but no single women till the late 1930s), Hunter — who, himself, joined the cast as an actor in 1915 — had this wry, piquant comment:

“No, we are not always a happy family. It would be better to say that we are a typical family. That means that, as with families living too close together, for too long a time, sometimes the members get on one another’s nerves, and there is sometimes at the end of a season a strain or tension. But there are members of the troupe who have come back to us year after year.”

Hunter found his actors through the theatrical trade papers, and he was specifically looking for Midwestern and Western troupers, not Broadway veterans. When New York thespians did sign on, they invariably bored everyone to tears and distraction with endless talk about how much better everything was back up in the city.

In April 1925, the James Adams Floating Theatre, then in its 12th season, pulled up Bath Creek on the Pamlico River’s north shore, docked at Bath, and a woman who had been awaiting the craft for several days boarded her, exhilarated and with every intent of making American literary history. She was Edna Ferber, former Wisconsin newspaperwoman-turned-novelist, hard on the trail of all the romance and color of backstage life she might find on these watery boards. In her short week on the James Adams, Ferber threw herself into the life of the troupe, helping out in the box office (35 cents for the 8 p.m. show, 15 cents additional for reserved seats, 10 cents more for the hour-long vaudeville show — magic, ventriloquism, and such — after the play) and taking notes on it all. Charlie Hunter spoke with Ferber for many hours and filled her head with tales about the only floating theater she would ever spend a stitch of time upon.

Hunter gave Ferber the unvarnished truth about the shows the great boat brought to a succession of isolated river ports — comedy and melodrama, not at all the sort of drama that the Great White Way might want. “When we first went trouping with the boat, the majority of persons who made up our audiences had never been inside a theater before,” Hunter declared. “I don’t believe we would get half a house for the first night if we were to put on What Price Glory, for instance. After the first evening we would play to empty seats.

“We give them the old-fashioned hokum — all about mother love, faithful and unfaithful sweethearts, the lamp in the window, an occasional villain, and all in a play full of smiles and tears, but mostly hilarity and fun.

“To a large number of people who came to see our show, especially in the early days, the plays were real. They watched the performances in the same spirit they would have viewed real occurrences.”

What Ferber witnessed during her brief stay with the maritime thespians proved a fair sample of seasons past and seasons yet to come.

Charlie Hunter blessed Edna Ferber with more than enough material for her to go off to France and New York and write the hit 1926 novel Show Boat, and a scant year later, Broadway welcomed the hit 1927 musical that Ferber’s book engendered, with a gorgeous score by Jerome Kern and Oscar Hammerstein II.

Back at the James Adams, theatrical life went rolling on.

During their days, when they were not treading the boards, the players fished and swam. After the shows, they ate sandwiches and salads in a low-ceilinged dining-room (just five and a half feet high) directly beneath the stage. In the early years, James Adams would get the postshow nighttime cracking by shouting out, “I’m the best damn pinochle player on this boat!” and someone would call him a liar, and then the game was afoot, going on half the night, as L.D. Waldorf later recalled it, and often till dawn. One week’s last curtain would come down each Saturday night, and the showboat would move on to the next week’s stop the first thing each Sunday morning.

A St. Michaels, Maryland, widow named Nina Howard, who had followed the James Adams about for a season on her yacht simply because she liked show people, bought and began operating the showboat in May 1933, painting it an eye-catching vermilion and by 1937 adding a chorus line called the Streamlined Stylettes. Yet, as the Great Depression lengthened, with radio, records, and talking pictures all the entertainment rage, audiences for such a 19th-century curiosity as a showboat were disappearing. And bad omens were on the waters: The James Adams Floating Theatre, having sunk in November 1929, in Turner’s Cut off the upper Pasquotank River, struck a snag and sank again in the Roanoke River on the way to Williamston in November 1938. Though the craft was swiftly raised and repaired by the Elizabeth City Iron Works and put back into service, reports reached Elizabeth City only three years later, in November 1941, that fire had done in the James Adams for good down on the Savannah River in Georgia — the final curtain.

Still, a very great deal of her lives on forever in Edna Ferber’s Cotton Blossom, the floating palace of Show Boat, and whenever any voice anywhere lifts “Ol’ Man River” and “Can’t Help Lovin’ Dat Man” in song, sound-country waters aplenty, among them those of the Pamlico River and the Pasquotank, too, flow through all those deeply bluesy, soulful lilts.