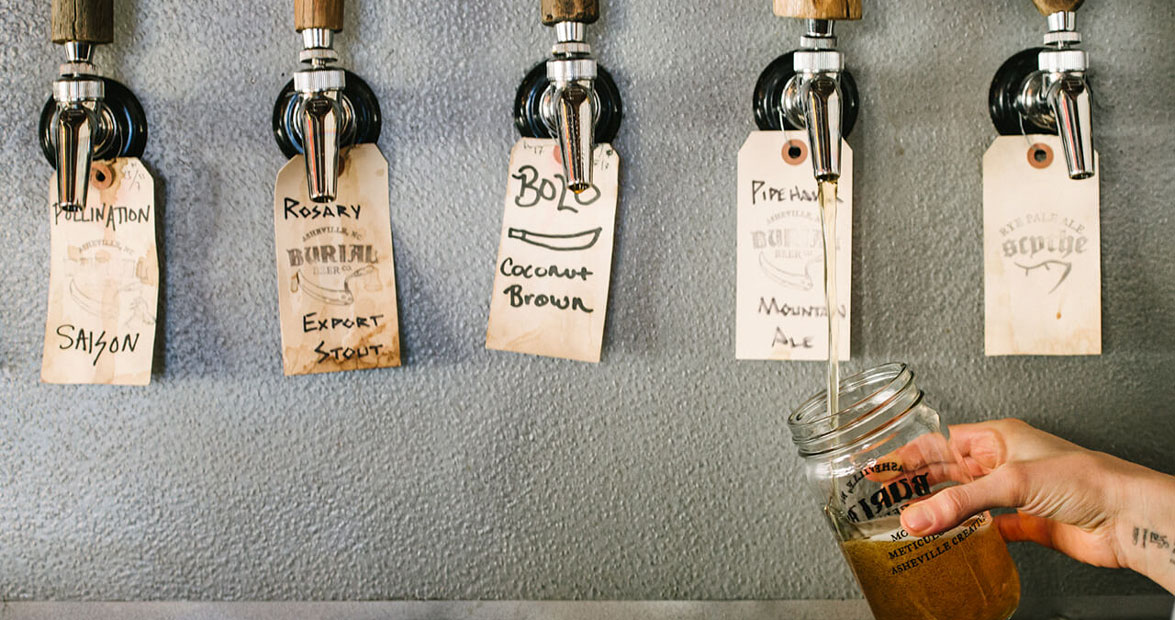 On Friday afternoons in Asheville, as the workweek winds down, thirsty locals and tourists looking for a beer adventure hit the South Slope brewing district, a cluster of breweries — and a doughnut shop like no other — along a two-block stretch of Asheville’s Coxe Avenue.

For years, this area was Asheville’s gritty automotive center. But most of those businesses moved away long ago. A few vestiges remain — old car lots, an auto supply shop — but they look out of place in the heart of the city’s craft beer scene. Especially on the weekend.

Tim Weber and Stephanie Estela were engineers and home brewers before they left Pennsylvania in 2012 in search of a new way of life — and a little sun.

“For so many years, I worked in a dark cubicle,” says Weber. “I wanted to see the sunlight.”

Their search brought them to Asheville’s South Slope and the window-walled former photo studio and automotive garage where they opened Twin Leaf a year ago, just as the neighborhood’s brewery scene began to explode.

“We didn’t even consider how close Green Man or Hi-Wire or Burial Beer were,” Estela says.

At Twin Leaf, she runs the business side and tends bar, and Weber handles the brewing, coming up with recipes for beers like 144 IPA and White Noise Wit.

“We like to make beers that are very drinkable but with a lot of minute complexity,” he says.

Now that they’ve had a taste of South Slope’s sunny side, they’re ready for more: This summer, they’re expanding outdoors with a beer garden. 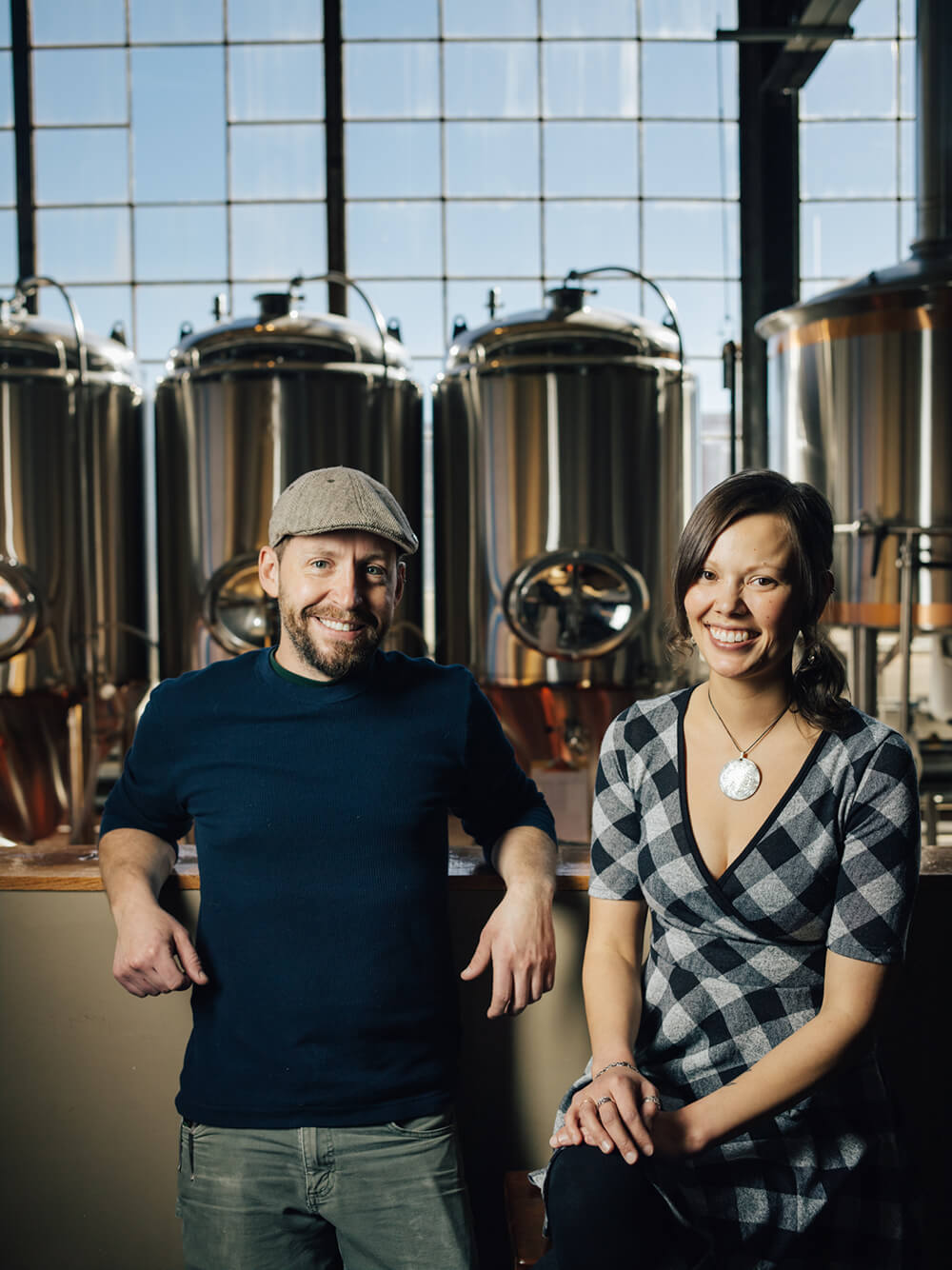 Drawn to the slope

Dennis Thies wasn’t the first beer drinker to fall in love with a Green Man ale — stouts and porter are among its flagship beers — at the brewery’s Dirty Jacks tasting room. But, he’s the only one to love the beer so much that he bought the brewery.

“Everyone thought I was out of my mind — my wife, my mother, my attorney,” Thies says.

The brewery — one of the oldest in Asheville — opened in 1997 and moved from the popular Jack of the Wood downtown pub to South Slope in 2003. Thies was a regular customer at Dirty Jacks. “I thought it was pretty cool,” he says of the tasting room. When the brewery came up for sale in 2009, Thies was ready for a new challenge. He bought the brewery the next year and began expanding the operation.

Other breweries found their way to the neighborhood, including Asheville Brewing Company, which expanded and took over an old Cadillac dealership at the top of Coxe Avenue; Hi-Wire Brewing next door; and then Burial Beer, Twin Leaf, Wicked Weed Brewing’s Funkatorium Tasting Room, The Thirsty Monk craft beer bar at the top of the slope, and Catawba Brewing Company.

The crew at Vortex Doughnuts begins the day in the dark. Just doors away from South Slope’s breweries, the shop’s first employees arrive at 4 a.m. to start the first batch of doughnuts — and brew the first pot of coffee. When the doors open at 7 a.m., an assortment of treats — Cinnamon Shug, Glazed, Salted Caramel, Vanilla, and Old Fashioned — fill Vortex’s glass display shelves. These aren’t like the offerings found in grocery stores or picked up from a franchise’s drive-through window. Sweet, light, and airy, they’re doughnuts that patrons talk about in hushed tones with trusted friends, as if the place is a secret they don’t want to share but can’t keep to themselves. The biggest secret that just has to be shared? The Vortex Rotating Tap — doughnuts topped with a beer-based glaze made from brews by Catawba, Burial, and Twin Leaf breweries.

“It takes a lot of work. Each beer is different,” says owner Ben Myers.

The result is a South Slope treat that is as unique as it is delicious.

“Someone said that doughnuts and beer are the bread and water of Asheville,” Myers says. “They are both very sensitive to environmental conditions.”

Like almost everything in this part of town, nothing is rushed and everything is local — the Vortex crew makes the doughnuts from scratch using North Carolina flour and milk, Asheville eggs and chocolate. 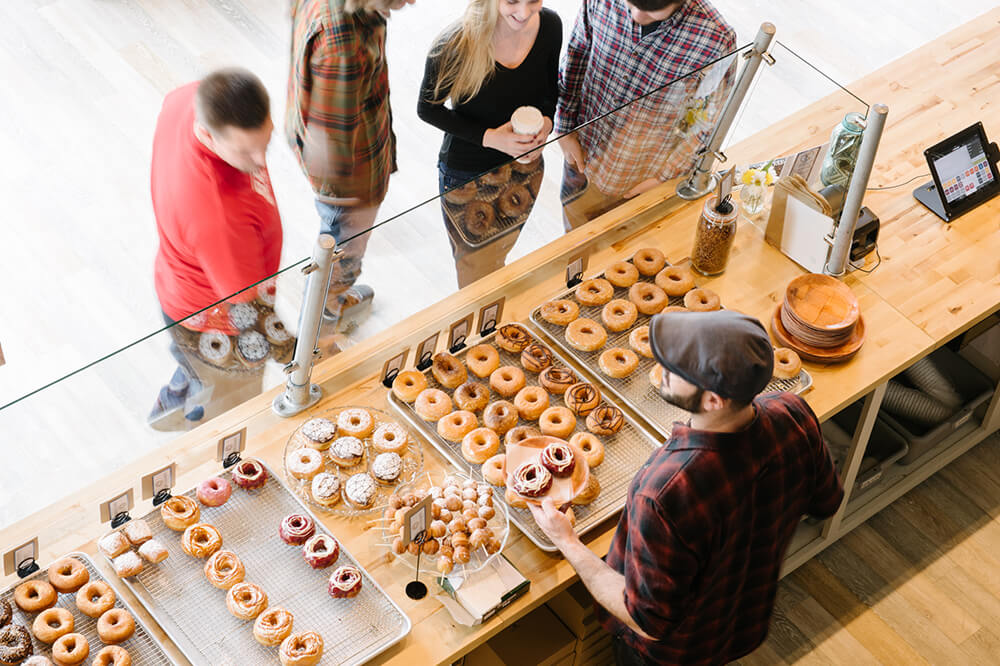 Some of the biggest fans of the doughnuts are the shop’s brewery neighbors, with whom Vortex quickly connected soon after it set up shop in the empty old Standard Paper building in October of 2014. The place regularly sees brewery workers arriving for their morning shifts. And Myers often takes his popular doughnut holes to places like Burial Beer Co. — where they garnish the brewery’s Skillet Donut Stout. “Their doughnut holes and our breakfast stout are truly a perfect pairing — like red wine and steak,” Burial Beer owner Jessica Reiser says. Or, perhaps, South Slope and beer.