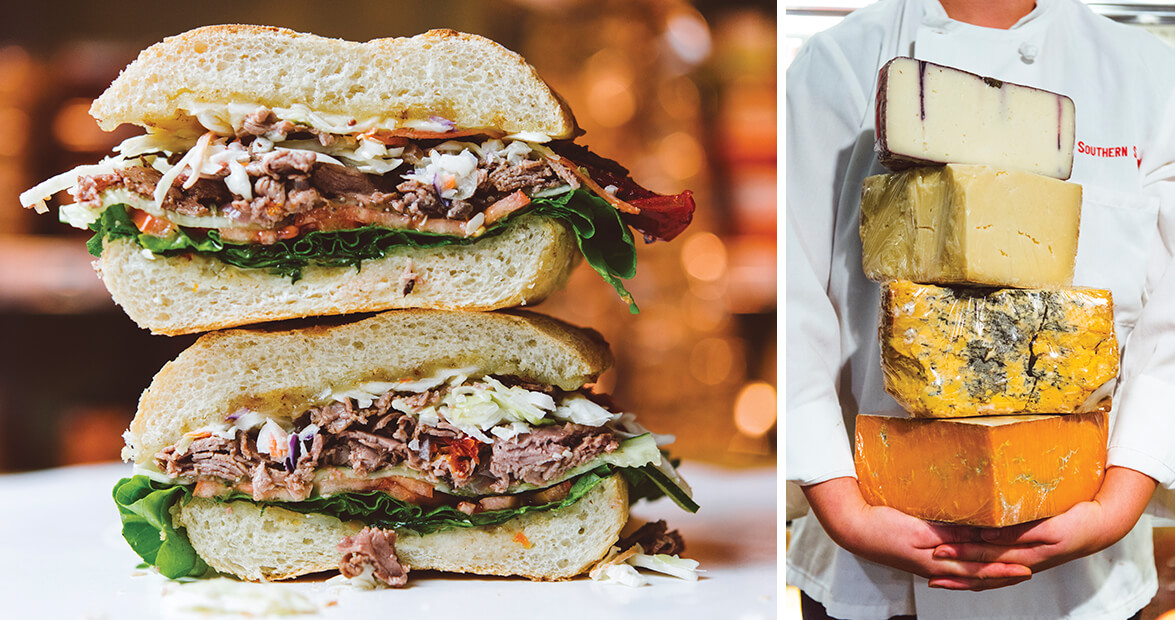 A mother and her young daughter scurry past the coffee beans and croissants and goat cheese and truffles. The little one’s legs are half as long, but she moves twice as fast.

“I think they have cheese straws,” the mother says.

Actually, Southern Season has a whole cheese straw section. Fresh produce aside, you’d be hard-pressed to find a food (or product or appliance) that the gourmet superstore doesn’t stock in its 59,000-square-foot flagship in Chapel Hill. The late New York Times food critic Craig Claiborne called the store “a visual and gustatory delight,” from “wall to wall and floor to ceiling.”

Indeed, by the time the two find the cheese straws, they look even more lost. There are pimento cheese straws. Blue cheese. Chive. Rosemary. Bacon. Southern Season’s inventory is always urging customers to try something new.

The daughter smiles wide, then reaches for a tin.

Around the world in Chapel Hill

“For a long time, especially if you were a foodie, and you loved something you couldn’t get at the grocery store … you shopped at Southern Season,” Zimmerman says. “In the early ’80s, when my grandmother was shopping, we’d come for weird spices that you couldn’t get anywhere. She liked this kind of curry that only they carried.”

Southern Season opened in 1975 as a coffee roaster. It was 800 square feet, and founder Michael Barefoot was the only employee. Along with his bean business, he also sold tough-to-find ethnic ingredients. To Caroline Cahan, the coffee/tea manager, this idea of bringing worldly foods to Chapel Hill was “a singular vision.” She came aboard 23 years ago, and hers is the first smile you’re likely to see when you walk in the store.

Then, many of today’s gourmet supermarkets were very young or yet to be born. Sur La Table was three years old. Dean & DeLuca wouldn’t open for two more years; Whole Foods, another five. (Which explains why Zimmerman’s grandmother was so glad to find good curry powder.) Ironically, as Southern Season now celebrates its 40th anniversary, international has lost its luster, and local gleams. What distinguishes the company today is a devotion to neighborhood producers, like Raleigh’s ABC Pie Company, Chapel Hill Toffee, and Durham’s Big Spoon Roasters. The four Southern Season stores, across three states, are anything but cookie-cutter copies. They’re drop biscuits.

There is one similarity among them, though. The first department is always coffee, an homage to the company’s humble origins. When you walk in, the grinders whir and buzz and, suddenly, everything smells like roasted hazelnuts, buttery toast, early morning sunshine.

Since 1975, Southern Season has moved twice, added a restaurant and cooking school, and transferred ownership. What was once a one-man operation is now a commercial force sweeping the South. According to President and COO Dave Herman, there could be twice as many stores within five years.

“There have been a lot of changes,” says Linwood Bradley, the longtime home goods manager. “But [our regulars] still show up, bless their hearts.”

Herman has a theory why: “No one comes into the store and asks for me,” he laughs. “They ask for Rhonda in cheese and Caroline in coffee and Liz in wine. Our department managers have such a passion for their product. It’s unlike anything I’ve ever seen.” 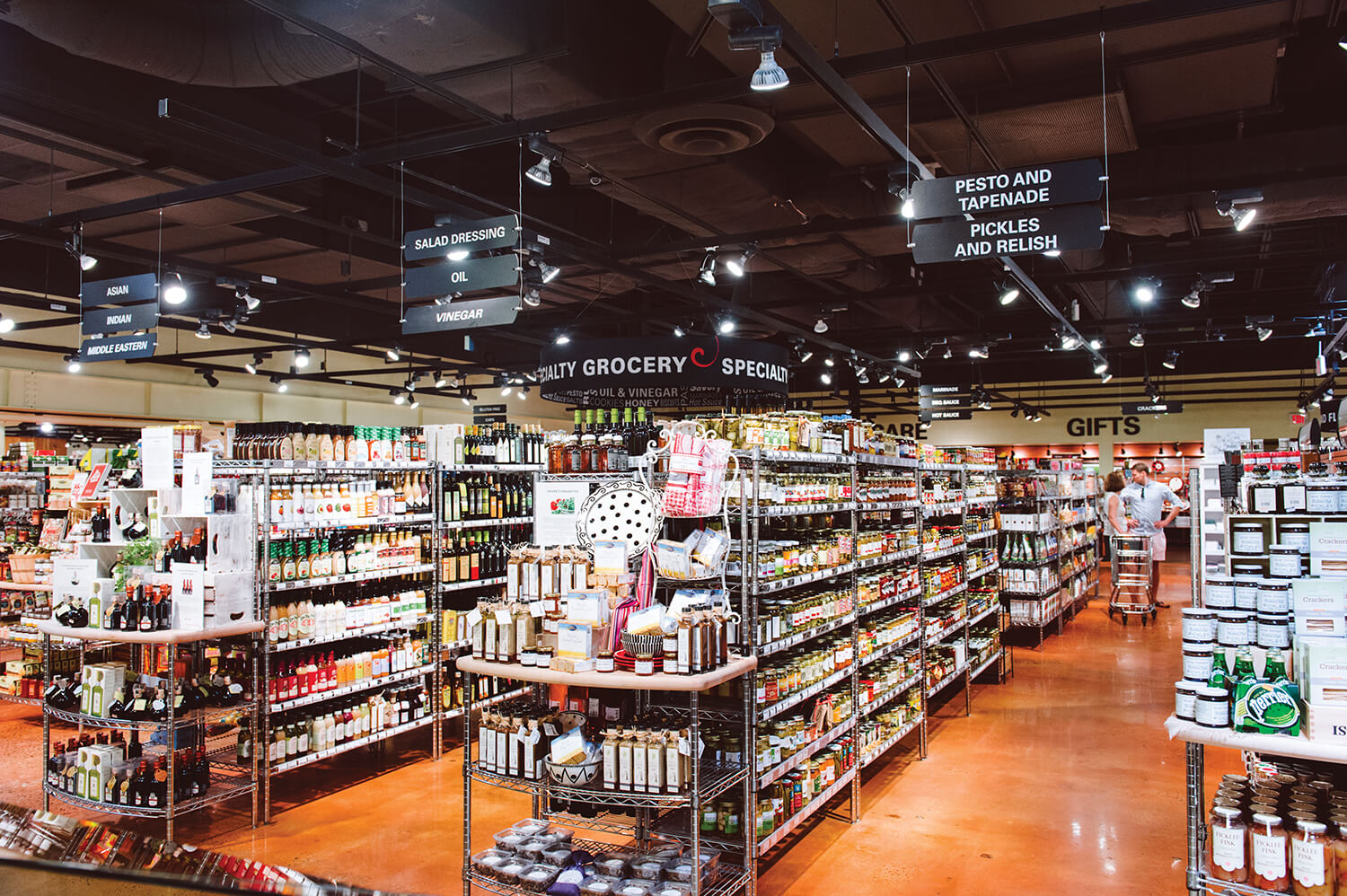 Beyond the coffee beans and cheese straws, the cast iron and cutlery, is the cooking school. It hosts more than 300 classes each year; today, my mother and I are attending Intro to Biscuits. She’s never made biscuits in her life. I make them for a living, a fact that we decide to keep hush-hush.

We assemble at a long table decorated with white hydrangeas. Our classmates include a seventh grader and her grandma, a businessman and his girlfriend, and a pair of 20-something pals. Most haven’t made biscuits before, but the businessman has. “Funny thing is, I tried two weeks ago,” he says. “And they were horrible.” He’s wanted to take this class for months, but it sells out, fast.

The teacher, Kim Calaway, starts her recipe demonstration. She’s as sweet as sorghum, smart, and she shares all her secrets: for tender biscuits, measuring flour, seasoning grits. (Don’t overmix, pour into the cup, salt at the end.) Then we tie our aprons and roll up our sleeves.

My mother and I share a station. As she pours buttermilk, I survey the room. Everyone is covered in flour, greased with butter, making a mess. Everyone is smiling wide, and I realize, in that moment, that we’re all just a kid in the kitchen, standing on a stepstool, trying something for the first time.