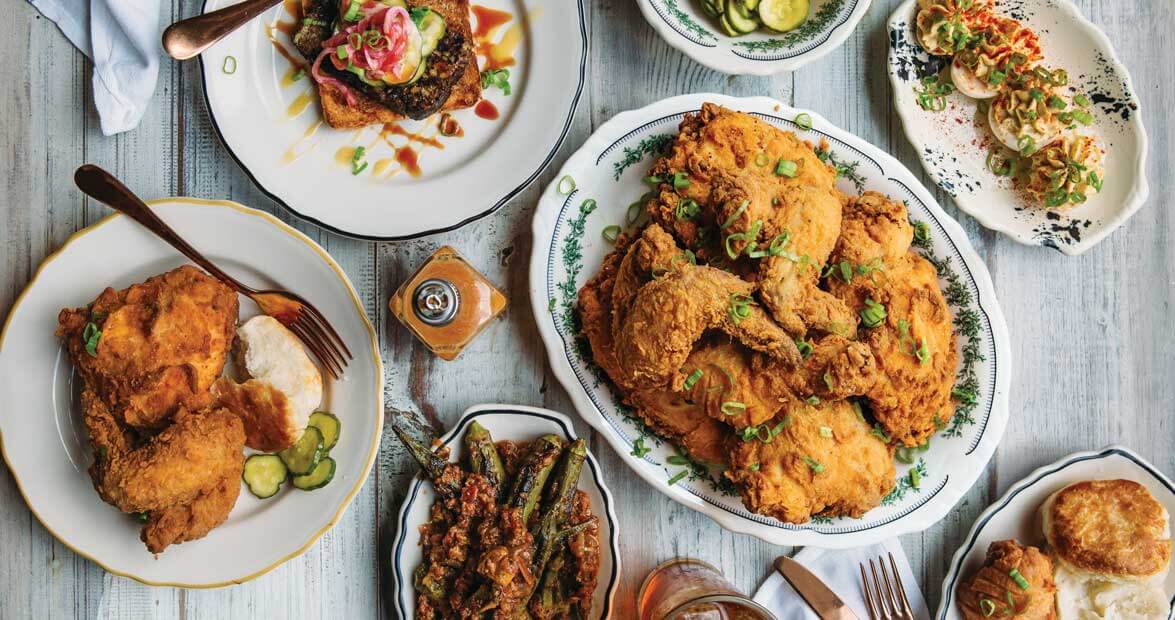 People forget, or maybe have never known, that NoDa was originally a mill town. Before it became blocks of art galleries and gentrifying condos — the name was originally ironic in arts circles, with some saying it was a play on Manhattan districts like SoHo and NoHo — it was just North Davidson Street, an area north of Charlotte’s business towers, where people lived close to the factories where they worked. It was a place for hunkering down over a cold Pabst after your shift, not a craft brew that cost as much as a six-pack.

So it seems fitting that Haberdish builds on that blue-collar version of the South, from the denim upholstery to the reclaimed brick and Edison bulbs. The decor could have been too precious, but its ties are true enough to the history of the Piedmont that it fits in the neighborhood like a hand in a well-worn work glove. 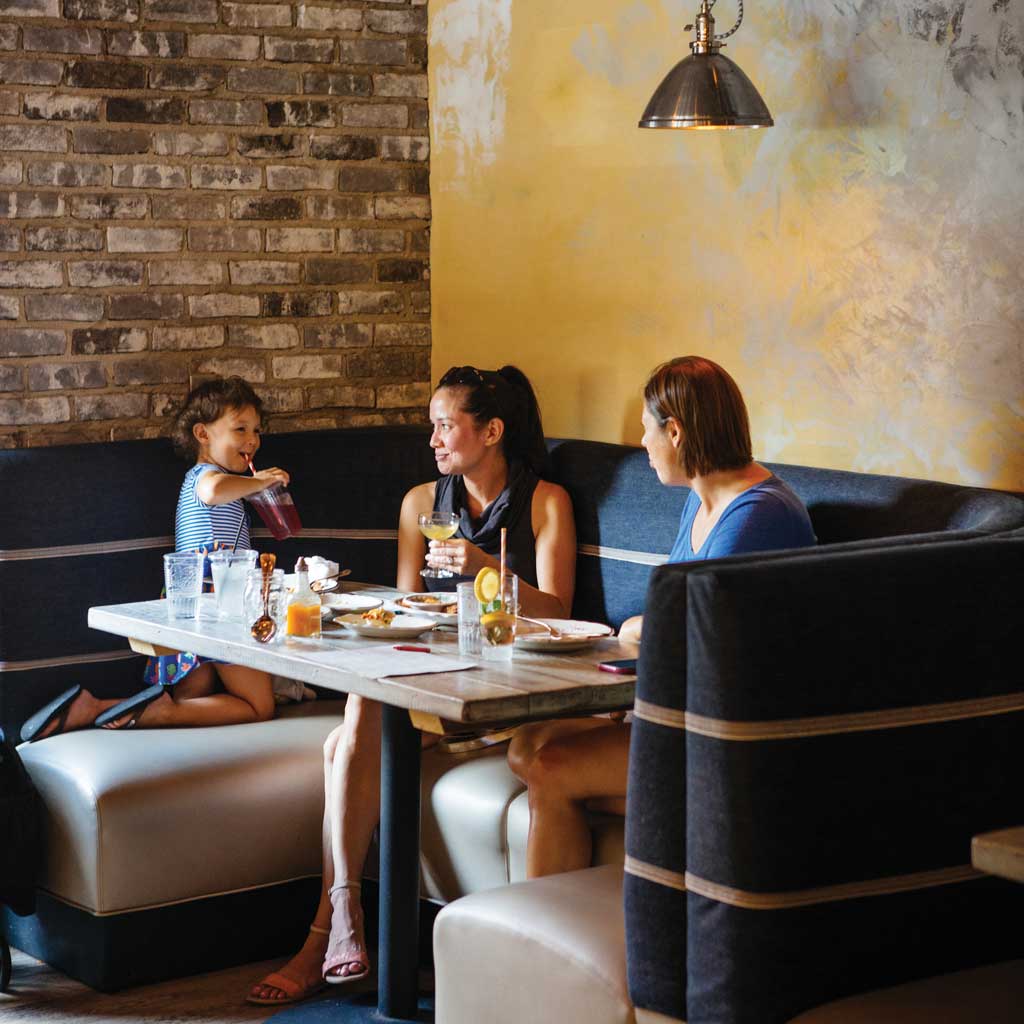 At Haberdish, there are North Carolina touches woven into the decor. For example, the denim in the booths came from the now-closed Cone Mills in Greensboro. photograph by Tim Robison

Let’s be honest, when you go into an old-style Southern restaurant, you usually know what to expect: The checkered tablecloths, the rusty farm implements, the country-fried menu of Grandma’s favorites. But Haberdish plucks a different set of Southern-tuned heartstrings. It draws from the mill-town South, where factory whistles and roaring textile machinery once set the rhythms of working-class life. “We liked that story and sense of place,” co-owner Jeff Tonidandel says. 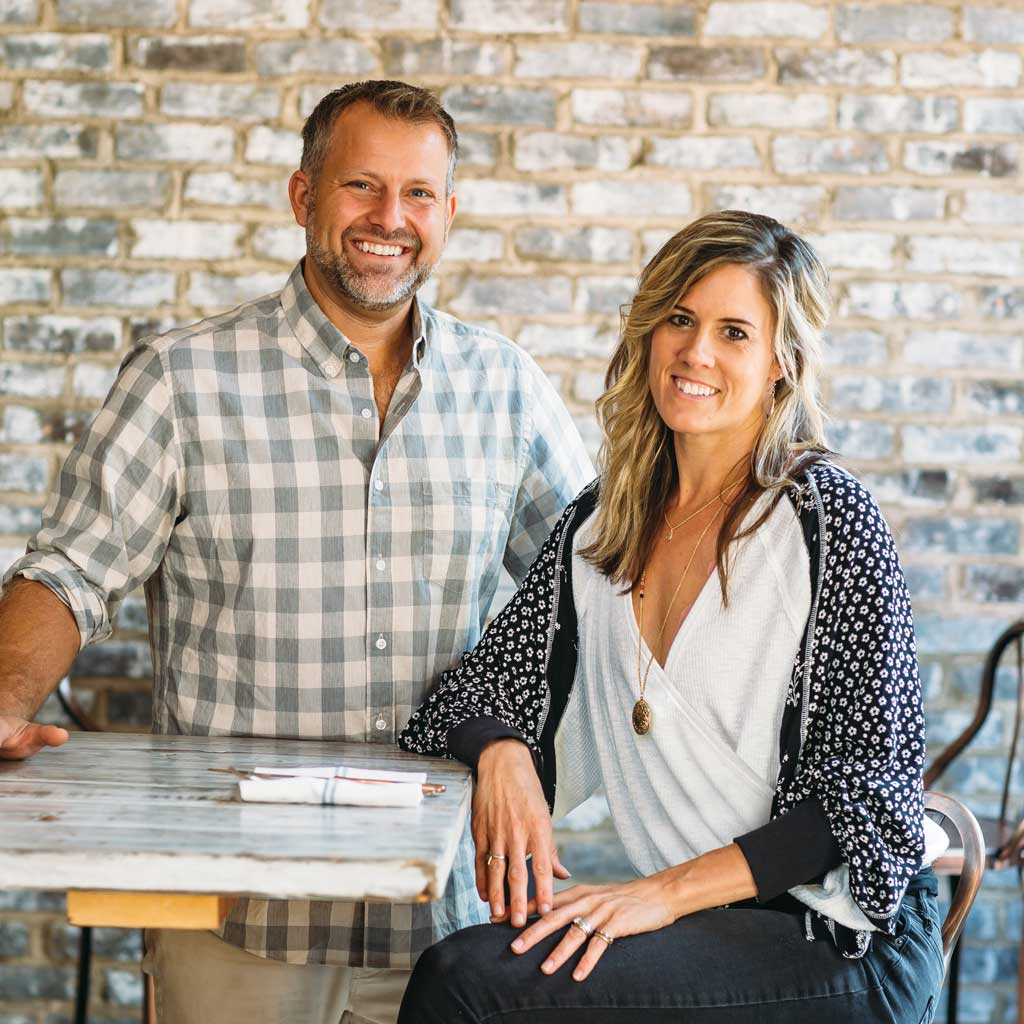 Jeff Tonidandel and Jamie Brown co-own Haberdish, as well as Crepe Cellar Kitchen and Pub and Growlers Pourhouse, all on the same block in NoDa. photograph by Tim Robison

The menu includes a little tribute to the history of places like Johnson Mills and Highland Mills, the big brick factories that used to shape the area, and a section labeled “Look Around,” which explains the origins of a lot of the interior: The selvage denim on the cushions came from Cone Mills in Greensboro; the soapstone bar was quarried in Virginia; and the bar taps are textile spindles.

Oh, it’s stylish, all right. This is NoDa, after all, and beverage manager Colleen Hughes packs the cocktail menu with a roll call of Southern craft spirits, from Muddy River’s coconut rum, made in Belmont, to smoked rye from Copper Fox in Virginia.

Most of the menu focuses on dishes meant to be shared. Everything arrives on mismatched china. It’s not fancy like your grandmother’s house after church on Sunday, more like a weeknight supper after a long workday, eaten before you collapse on the porch and wait for the blessed cool of dusk. Every table has a Mason jar with a couple of big serving spoons, handy for “you have to taste this” sampling.

With NoDa being what it is, expect to see cars hunting for scarce parking spaces, rolling slowly past like cruising teenagers on a small-town Friday night. Inside, you can watch the parade while you settle in with a cocktail and a bowl of boiled peanuts to wait for your order of excellent fried chicken, brined and battered for maximum crust.

Relax and be glad that you don’t have to jump when a factory whistle blows.