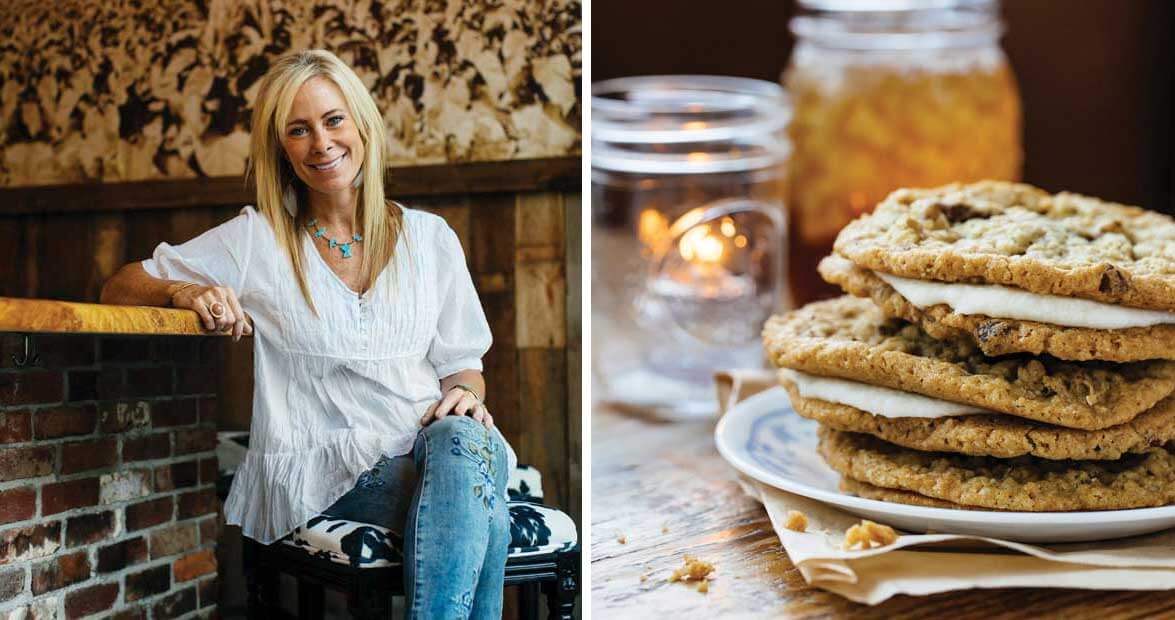 Even in her mid-40s, Deedee Hagner still adds “Yes, ma’am” to nearly every sentence. That’s the way children are taught in Williamston. And it’s her Williamston childhood — built on food, farming, and family — that Deedee has re-created along busy Morehead Street at The Packhouse restaurant. “I’m not going to deviate from what I know,” Deedee says. She’s been in Charlotte for 20 years, first with the Carolina Panthers and then (and still) running The Mayobird and two other restaurants. Here, everything about her latest venture, The Packhouse, while very new, is actually very old.

Deedee wanted her restaurant to evoke a time and place, but she’s “not gonna lie about anything,” either, she says. So while she herself never worked long hours in a tobacco field, her family certainly did. In the fields, in the curing barns, and in “the packhouse” — the building where cured tobacco was stored until it was ready to go to auction. That’s her great-uncle, standing amid rows of tobacco stretching clear to the horizon, in the huge, sepia-tinted, glossy photograph beside the bar. An equally enormous — and just a bit (authentically) battered — North Carolina state flag, lit from behind so it glows, hangs over the bar. Settle into an old tractor seat, or a barstool covered in cowhide. 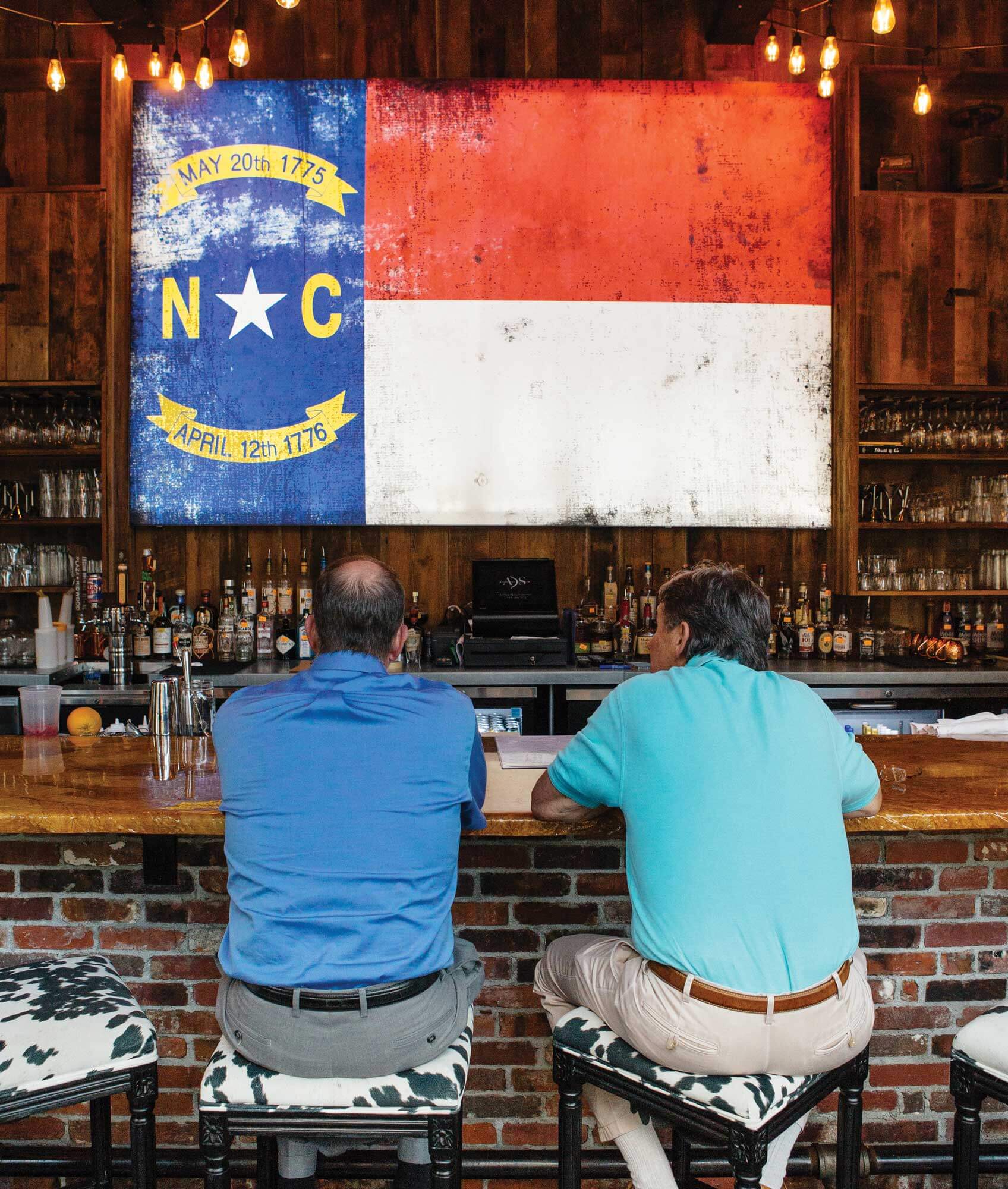 Want authenticity? The barstools are covered in cowhide. photograph by Tim Robison

And sure, the usual drink garnishes fill Mason jars, but so do cucumber cubes and peach slices, Southern staples for signature cocktails such as the Golden Leaf, concocted with Muddy River Spiced Rum, Cannon’s Shine, St. Germain, and a slice of a Krispy Kreme doughnut. And what would a packhouse be without a Tobacco Road, made with fig-infused Bulleit, Cointreau, lemon, and caramelized honey?

Could Deedee create the feel of a 50-year-old packhouse in an upscale building with lots of windows? She could, and did, beginning with the generous eastern North Carolina farmers who said, sure, dismantle our dilapidated curing barns. Those weathered boards were loaded onto open tractor trailers and hauled westward to become flooring, walls, and tables. So were the barns’ foundations, whose bricks now support the bar, a gorgeous, amber-tinted expanse of actual North Carolina tobacco leaves, forever preserved in acrylic by Artisan Leaf in Wilson. 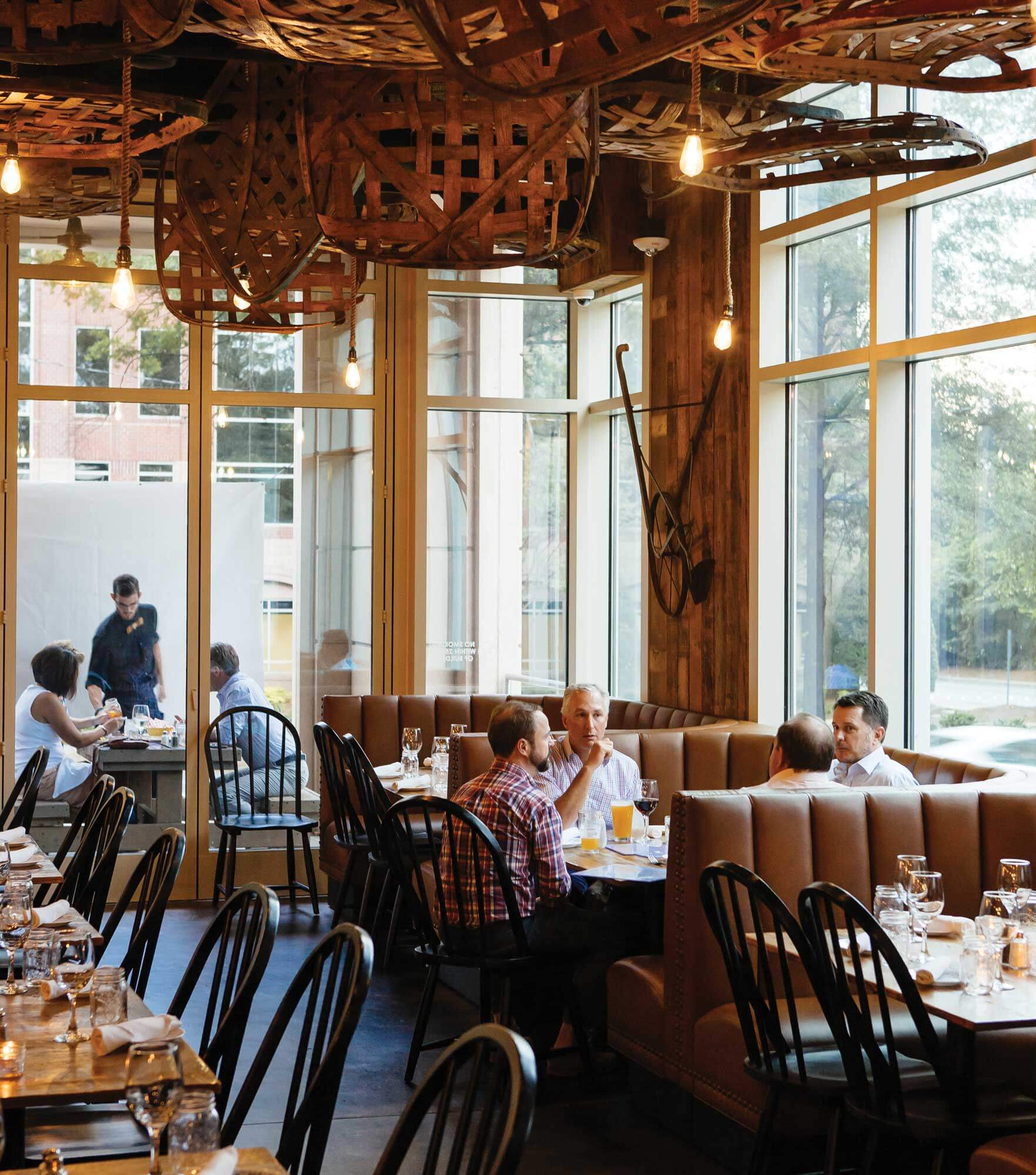 The flooring, walls, and tables are made with boards from actual tobacco curing barns. photograph by Tim Robison

Nary a square foot of the interior isn’t authentic. Tin roofing from the packhouses shelters a private dining area, reachable through sliding barn doors. Pieces of an old schoolhouse in Williamston were used to build the restrooms, where the sinks look like troughs, and you wash your hands under spigots. Hose couplings serve to hold your coat or bag. The scales, however, are merely decorative and (thankfully) don’t work, lest you see the poundage you packed on with The Packhouse’s oozing-with-cream oatmeal cookie, a Little Debbie on steroids, big enough to serve four.

There are, of course, the shrimp ’n’ grits, which come loaded with country ham, green onion, okra, roasted tomatoes, Tabasco, garlic, and lemon juice. The chicken and waffles, another Southern staple, have a kick, thanks to the chili syrup. There’s a rotating dish called the Market Plate, which features in-season ingredients from Jubilee Farms in nearby Chester, South Carolina. After the original executive chef, John Brandon, departed for Kinston’s Chef & the Farmer, the menu got a new look under the direction of Shelby Wise, who’s classically trained in French cuisine, but is heavily influenced by Southern and Cajun food, and is sourcing ingredients from nearby farmers.

Look closely: The waiters sport wooden bow ties knotted with burlap, no two alike, each hand-carved by nonagenarian Robert Moak. Your food arrives on Corelle and CorningWare dishes, familiar to so many of us, that Deedee scavenged from yard sales and vintage stores. 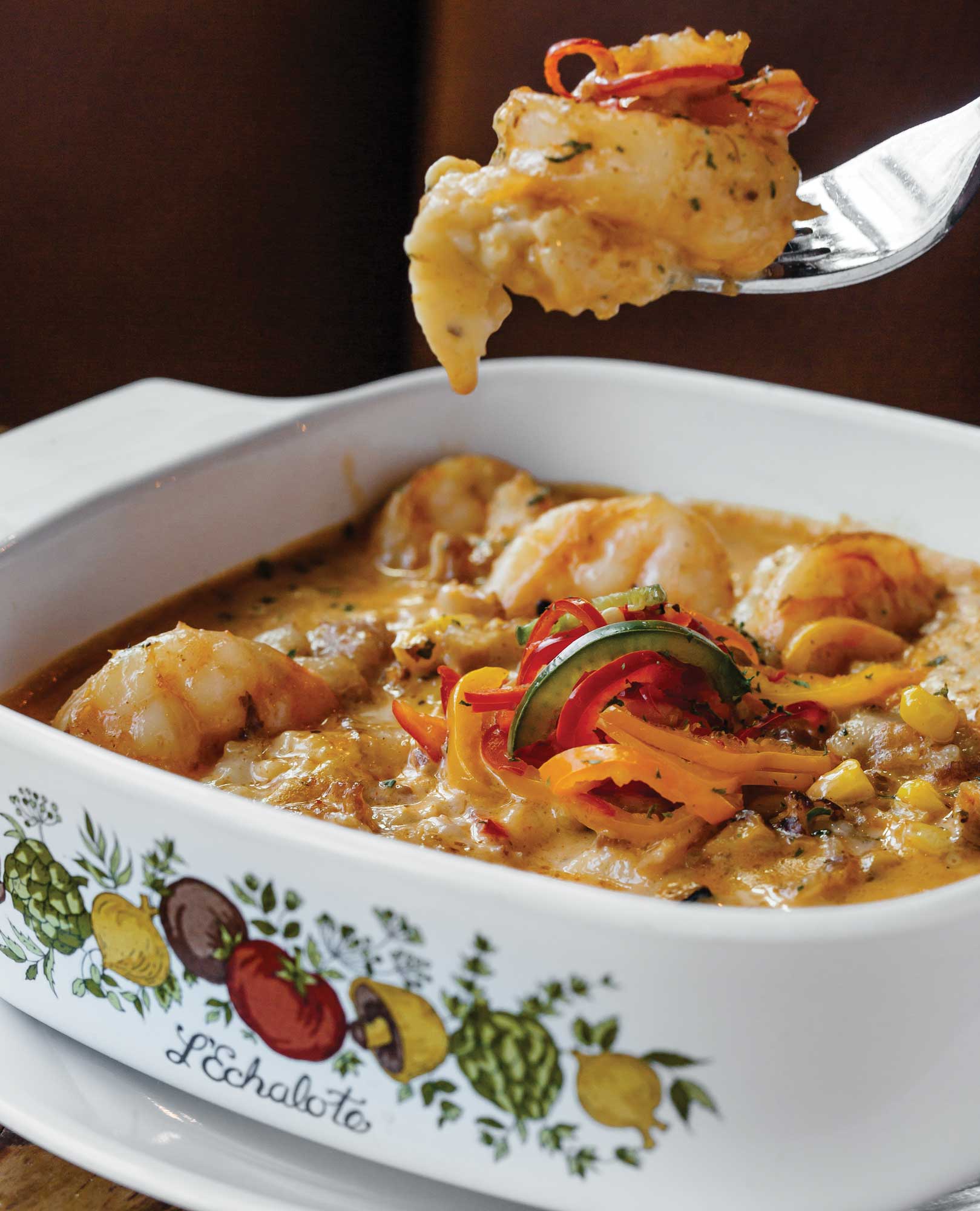 The food is fantastic and the dinnerware is familiar: Cajun seared shrimp and grits come in a CorningWare casserole dish. photograph by Tim Robison

And while Deedee’s restaurant is rolling things back to a simpler era of North Carolina heritage and history, it’s also paying it forward. In honor of her adopted son, Cannon Behailu, Deedee established Behailu Academy, a safe, creative environment that uses the arts and community service to empower youth in urban schools. Grants, as well as partnering with numerous Charlotte institutions, have made Behailu a great success, and some 57 teenagers attend the academy every day after the regular school day ends. Diners at The Packhouse are given the opportunity to “round up” their bill, say from $12.50 to $13, and that add-on goes toward the nonprofit and helps it grow.

On the front porch along Morehead Street, a family settles in at — where else? — a picnic table, while others claim rocking chairs. Inside, a gaggle of 30-somethings are celebrating a friend who grew up in Bertie County. The waitress arrives with their salads, and here in these surroundings, the Bertie County birthday girl looks right at home.