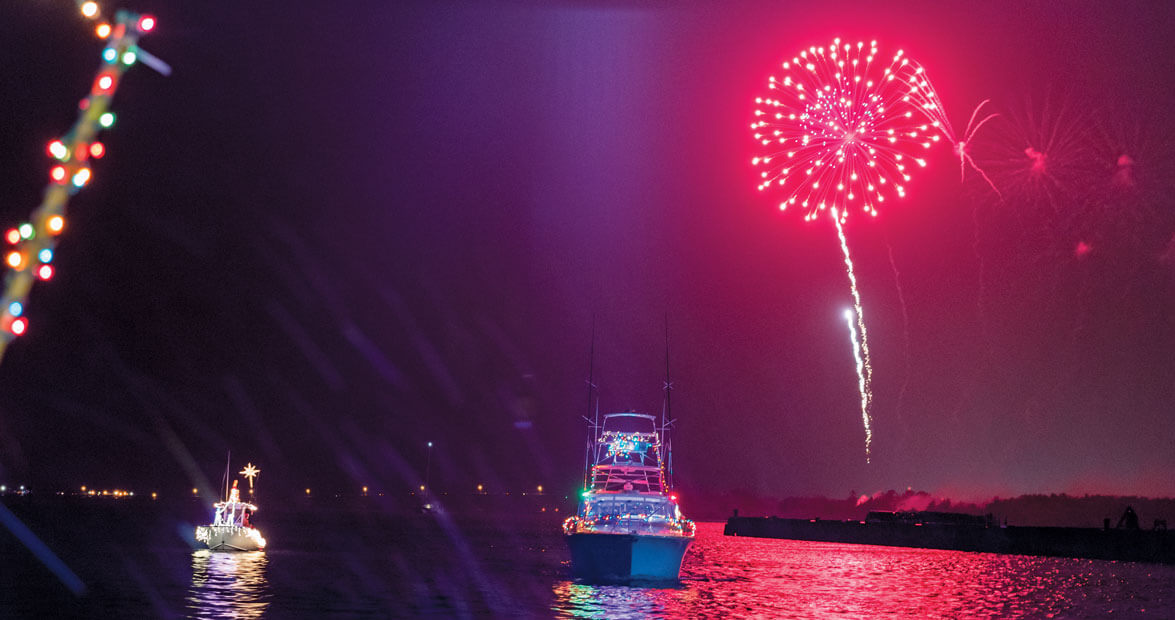 e were worried about the rain. We knew it was coming. Every forecast had been gloomy, and now we could see the skies darkening to the west, down the waterfront of Morehead City toward Swansboro and Emerald Isle. Heavy rain, too, the kind that dampens spirits and scuttles plans. It was slated to start around sunset.

But the rain didn’t know who it was dealing with. On the deck of Journey, my buddy Kevin Bellamy’s restored 1978 custom steel-hulled towboat-turned-pleasure cruiser, Kevin and his wife, Shannon, and my wife, Julie, and I ignored the obvious. Rain or no rain, the 26th annual Crystal Coast Christmas Flotilla was to start in a few hours, just as soon as it was dark enough for a generator-powered Santa sleigh to show up against the inky black waters of Bogue Sound. We cinched down our raincoats. We’d make merry, rain or shine. 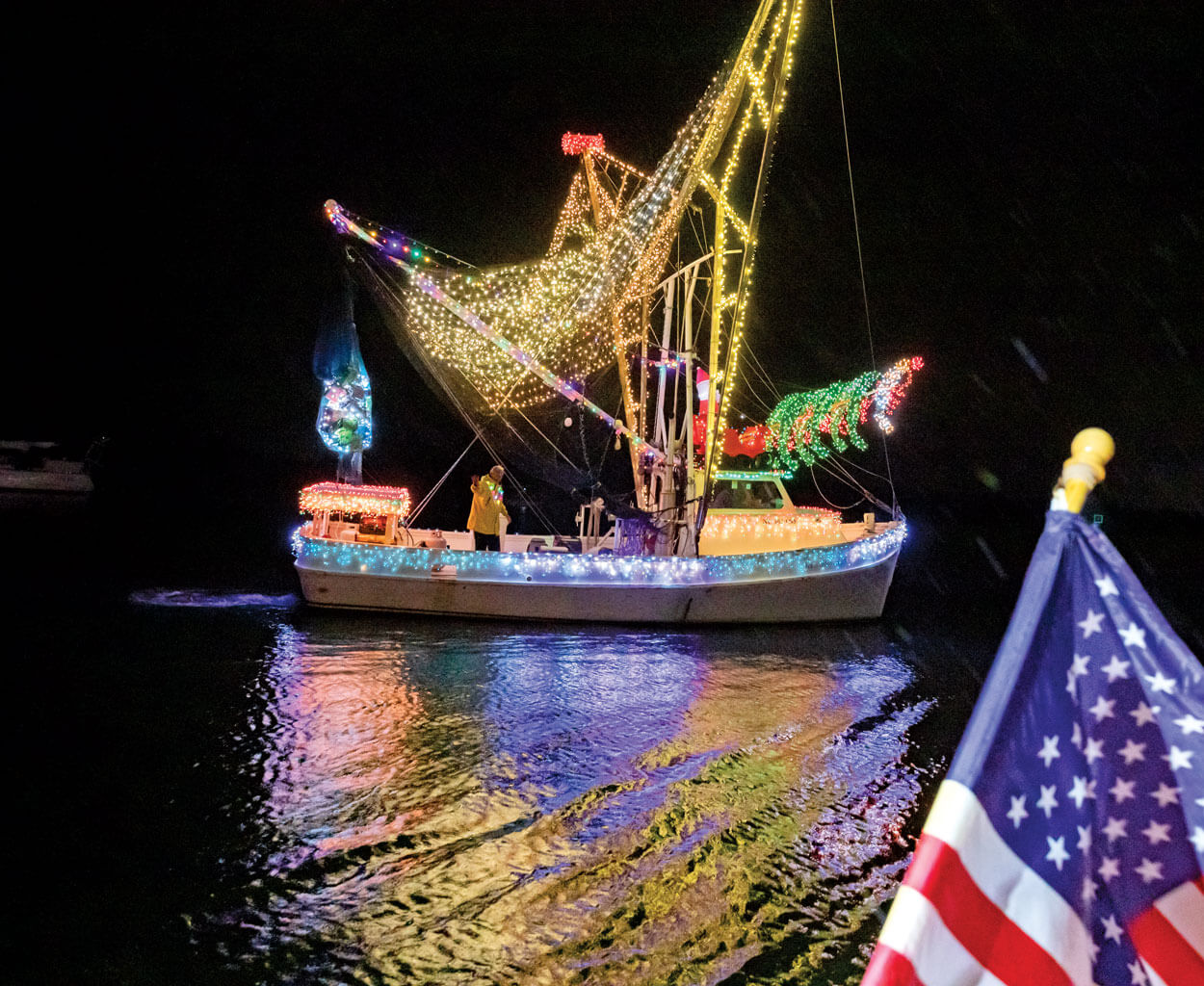 You’ll see three ships — and many more — come sailing in during the annual Crystal Coast Christmas Flotilla. With so many strings of lights, you can’t miss ’em. photograph by Charles Harris

Julie and I have been friends and boatmates with the Bellamys for 27 years, ever since our first boat trip together, running the Neuse River from New Bern to Beaufort in a ski boat designed for sheltered lake water. The wind was up, and the river was rough. Shannon was pregnant with her first child, Garrett, and she hung her head over the side of the boat, sick as a dog, for most of the 40-mile run. You don’t scare off salty sorts like Shannon with a gray forecast. And certainly not when you’ve invited Julie Nickens to princess-wave from the performance side of a holiday parade.

Julie loves a parade like no one I’ve ever known. For weeks, she’ll plan and plot her strategy to score a curb seat at the downtown parade in Raleigh, where we live. There is no cooking of turkey dinner without the Macy’s Thanksgiving Day Parade on television. But those are not enough to sate her appetite for festive processions. She remains on high alert until the last Christmas gifts are unwrapped. She could be Christmas shopping and spy three kids lined up with a red wagon, and she’d plop down on the nearest sidewalk, unwilling to take a chance that she might miss some impromptu mobile pageant, no matter how small. When she learned of a parade in early December that combined water, boats, reindeer, Santa Claus, and gaudy embellishment, I knew I could wipe that weekend off my calendar for the rest of eternity.

So the four of us ignored the forecast for the Crystal Coast, pooled together our Christmas lights and extension cords, zip-tied strands of red and green bulbs to cleats, pipes, masts, and railings, and hung a wreath from the pilothouse windshield. Journey’s theme might best be described as early 21st-century bric-a-brac. At the last minute, Kevin pulled out a couple of American flags and stuck them in rod holders on the port and starboard aft deck. And we set sail. Or started the engine, to be exact. Right as the first drops of rain splattered the metal decks.

Kevin kept his hand on the wheel, careful not to rear-end a red-nosed sea creature.

In the parade queue were sailboats and fishing boats and small skiffs and yachts, 24 craft in all. There were Christmas trees and snowmen and a sleigh. There were reindeer and sea captains dressed like Santa. Standing on the aft deck of Journey, we marveled at the decorated craft. That’s one of the wonders of a parade, anywhere, for any occasion: that folks would put in so much effort for such an ephemeral pleasure, and for a payback of nothing more than joy and glee. 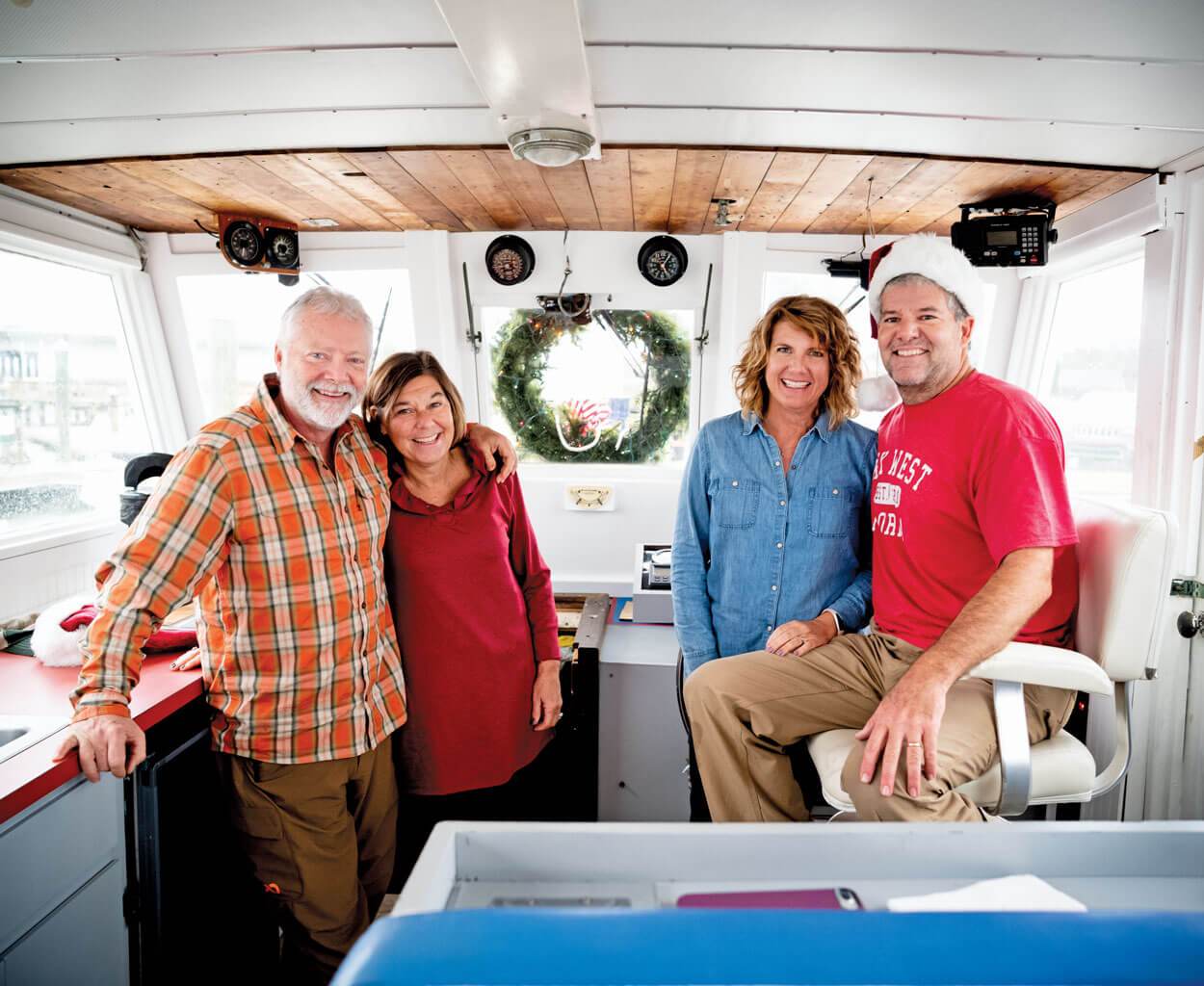 Last year, the author (far left) and his wife, Julie, helped Shannon and Kevin Bellamy decorate their boat, Journey. The finishing touch? A wreath hung on the windshield (with care). photograph by Charles Harris

We were undaunted, but unsure of how the rest of Carteret County felt about a maritime Christmas parade in a 48-degree downpour. When we pulled up to the Morehead City waterfront, however, there was the unexpected: The waterfront was jam-packed, shoulder to shoulder, with cheering crowds. We figured that the craziest people in town were the ones parading their boats in a dumping rain. But the spectators seemed as lit up as the boats, the streetlights glinting off hundreds of rain-jacket hoods, as if holiday sequins had been strewn along the waterfront. We cruised past the icons of Morehead City — the charter fishing fleet, Sanitary Fish Market, the party deck at Jack’s. All were full of cheering, water-soaked well-wishers. We left Morehead and made the long, dark chug along the inside of Beaufort Inlet, and then turned into Taylor’s Creek. The Beaufort waterfront was just as alive. More crowds. More whooping and hollering and shouts of “Merry Christmas!”

Kevin kept his hand on the wheel, careful not to rear-end a red-nosed sea creature or plow into an animatronic Christmas tree. I watched through the rain-streaked windows of Journey’s pilothouse, amazed. On the back deck, Julie and Shannon beamed in the glow of twinkling lights. They princess-waved to the throngs, rain cascading from their jacket hoods.

The Beaufort waterfront was alive with whooping and hollering and shouts of “Merry Christmas!”

It wasn’t the Christmas flotilla we’d hoped for — bundled on the boat deck on a brisk winter night, playing tag with the constellations reflected on dark water. But we made the Crystal Coast circuit without a single shorted twinkle bulb. And we learned a lesson about having faith in our fellow sopping-wet man and woman, who had nothing to gain from their night in the rain other than to return cheer for good cheer.

And lo and behold, there were glad tidings at the end of the night: Journey was judged as the most patriotic craft in the fleet, thanks to Kevin’s double Old Glories off the aft deck. We puttered home from the Beaufort waterfront awards ceremony ready to repeat our award-winning performance. The garland still hung from the boom with care, although there wasn’t the faintest hint of peppermint or pumpkin spice. Instead, our holiday spirit came tinged with the sharp scent of diesel fuel, carried into the night by a glorious 15-foot-long red-nosed crustacean.

Watch the merry boats go by: This year’s Crystal Coast Christmas Flotilla, held December 4, will parade past the Morehead City waterfront at 5:30 p.m. and the Beaufort waterfront at 6:15. Learn more at crystalcoastnc.org.