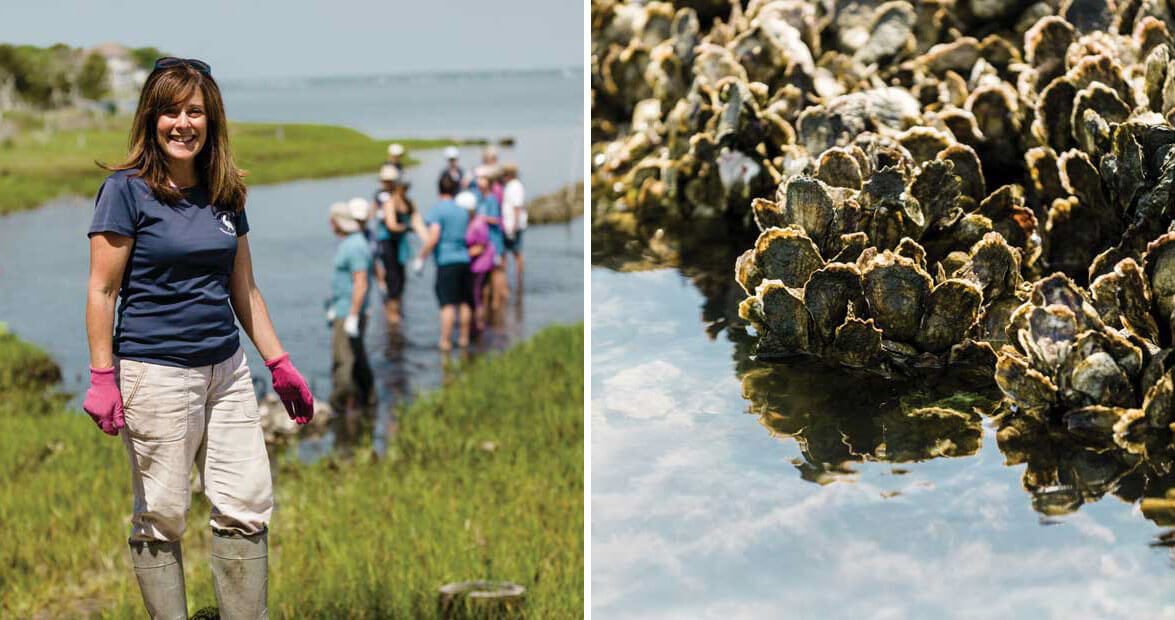 The story of oyster shell recycling is really the story of oyster love, even though, for all their wink-wink associations as an aphrodisiac, the love life of your typical bivalve isn’t terribly sexy. In North Carolina, a nice, warm, seawater bath of above 68 degrees puts romance — such as it is — in the air, triggering oysters to reproduce. Our East Coast oysters are “broadcast” spawners, releasing millions of eggs and sperm into the water to be fertilized.

Trocophore. Veliger. Pediveliger. All are 50-cent terms for a fertilized, developing oyster. Suffice it to say that the wild baby bivalve grows what looks like an eye and a foot, and begins searching for food and something hard, known as a substrate, to attach itself to: a rock, a pier, a tire, a piece of driftwood. But given its druthers, an oyster is happiest, like most of us, on familiar territory — i.e., another oyster shell. Another oyster shell indicates that water circulation and algae supported those who came before: If this marsh was good enough for Grandma and Grandpa, I can thrive here, too. Hence oyster beds, those unlovely clusters of sharp-edged shells. What looks to you like stitches on the soles of your bare feet looks like home to an oyster.

Enter the North Carolina Coastal Federation. Founded in 1982 “to protect, educate the public, and advocate for water quality and shoreline,” the nonprofit has a staff of more than 30, 12,000-plus members, and 3,000 active volunteers. In partnership with the state’s Division of Marine Fisheries (DMF), the Coastal Federation has worked to establish and preserve oyster habitats. “We’re creating no-harvest sanctuaries for oysters,” says Dr. Lexia Weaver, who supervises the central regional office of the Federation in Newport.

They’ve accomplished this task with recycled oyster shells, which come from both backyard oyster roasts and restaurants. “If you shuck it, don’t chuck it!” has been the slogan for the state’s oyster shell recycling effort, and throwing away oyster shells is actually illegal, no different than pitching a computer or paint can into your trash container.

For a long time, this is how it worked: People left truckloads of shells at dedicated state recycling centers. The DMF transferred the shells to barges and blasted them into designated areas with high-pressure fire hoses. And volunteers with the Federation collected donated shells bucket by bucket, “raked” them by hand into mesh bags, then headed by boat for specific drop sites, identified and permitted by the DMF. 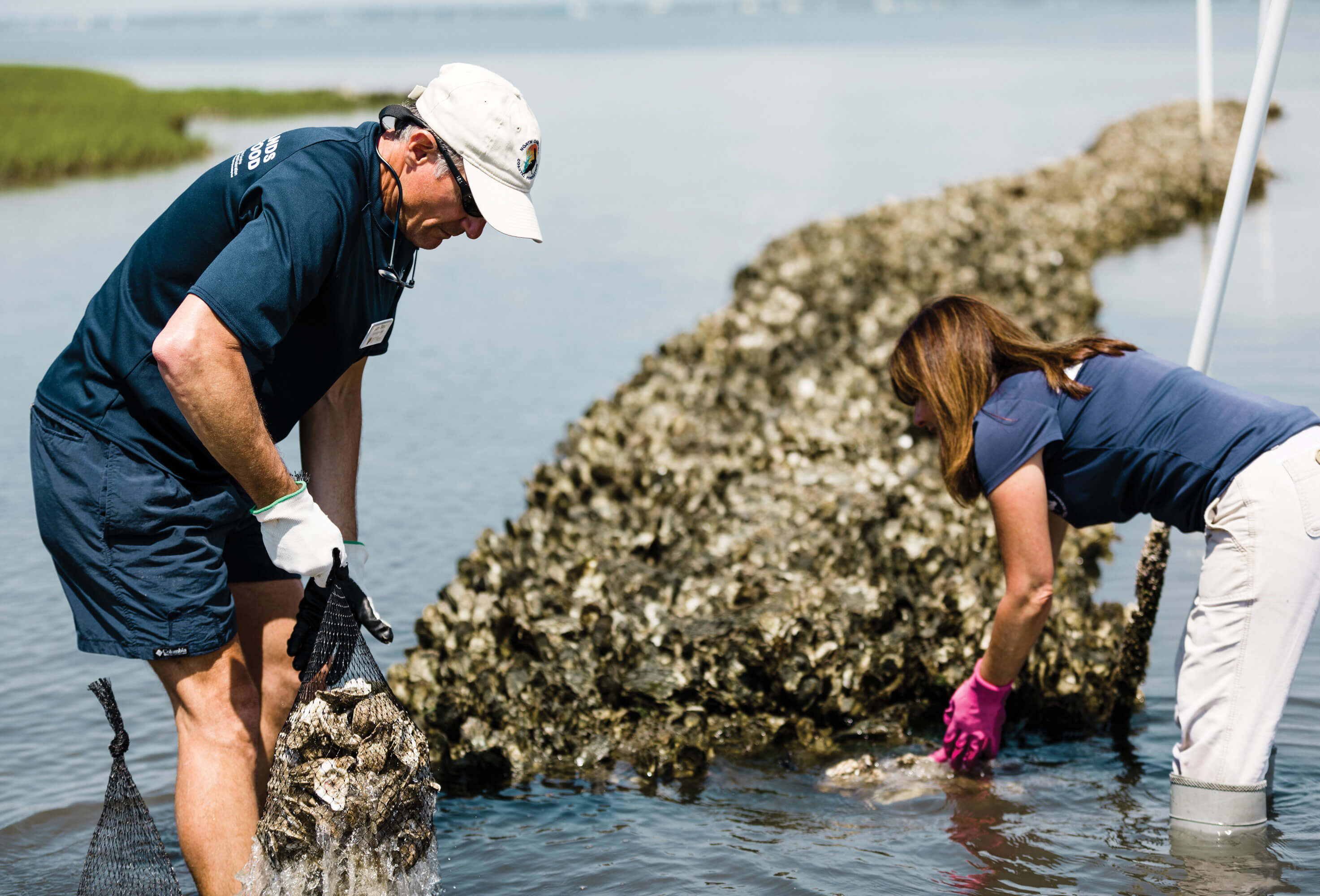 Sam Bland (left) and Dr. Lexia Weaver do the finishing work by hand, taking shells out of mesh bags and arranging them into beds where new oysters can attach and reproduce. photograph by Baxter Miller

The Federation also works with quarries to purchase limestone rock, known as “marl,” and deposit these basketball-size chunks in specific areas to create riprap, or a foundation for oyster colonies. Unlike your average pier piling, marl has plenty of calcium carbonate, which is a major component of natural oyster shells, and therefore beneficial to oyster growth.

Oyster shell recycling isn’t just good for the environment and on-the-half-shell slurpers. “Homeowners along the Intracoastal Waterway have become a great source for habitats,” Weaver says. “They find us by word of mouth.” Anyone who lives near moving water — and under the perpetual threat of storms and hurricanes — is concerned with erosion control. In the face of Mother Nature’s high winds and roiling waters, oysters hold their ground. Literally.

Recently, the legislature voted to discontinue the state’s role in the recycling effort, but the Federation has forged ahead. It’s looking to buy state recycling equipment and continues to use the shells in both living shorelines and oyster restoration projects. So the collecting goes on, and that means that faithful volunteers keep pulling on their gloves and making their rounds. It’s sweaty, smelly, heavy, dirty work, but Bill Trimyer isn’t much fazed. “Good news: No flies,” he says of the colder weather this time of year. “Bad news: The shells still stink.” Trimyer, 73, is a retired pastor, hospital chaplain, and current online professor. Three years ago, while sitting in a Charleston cigar bar, Trimyer met a fellow from the DMF in Wilmington who was talking about oyster shell recycling, and who put Trimyer in touch with the right people.

Roughly once a week, Trimyer, one of 20 such volunteers, makes the rounds of restaurants in Nags Head to collect oyster shells. First stop on this day is Coastal Provisions in Southern Shores, a gourmet market and wine bar that specializes in oysters. During a typical week, owner Dan Lewis says, Coastal Provisions will shuck 2,500 oysters — 1,600 on “half-shell Wednesdays” alone. “People are just eating more oysters than they used to,” Lewis says, and he’s dedicated to “getting the shell back to the sound.”

There’s nothing high-tech to the task. Participating recycling restaurants dump their shells into plastic buckets with lids and handles — your typical Lowe’s work bucket, which holds about 100 oysters — and place them out back. Trimyer fetches and hoists the buckets into the bed of his Ford truck, drives to a drop-off pile not far from the Coastal Federation office in Wanchese, dumps his treasure with a clatter, then returns the buckets to the restaurants. 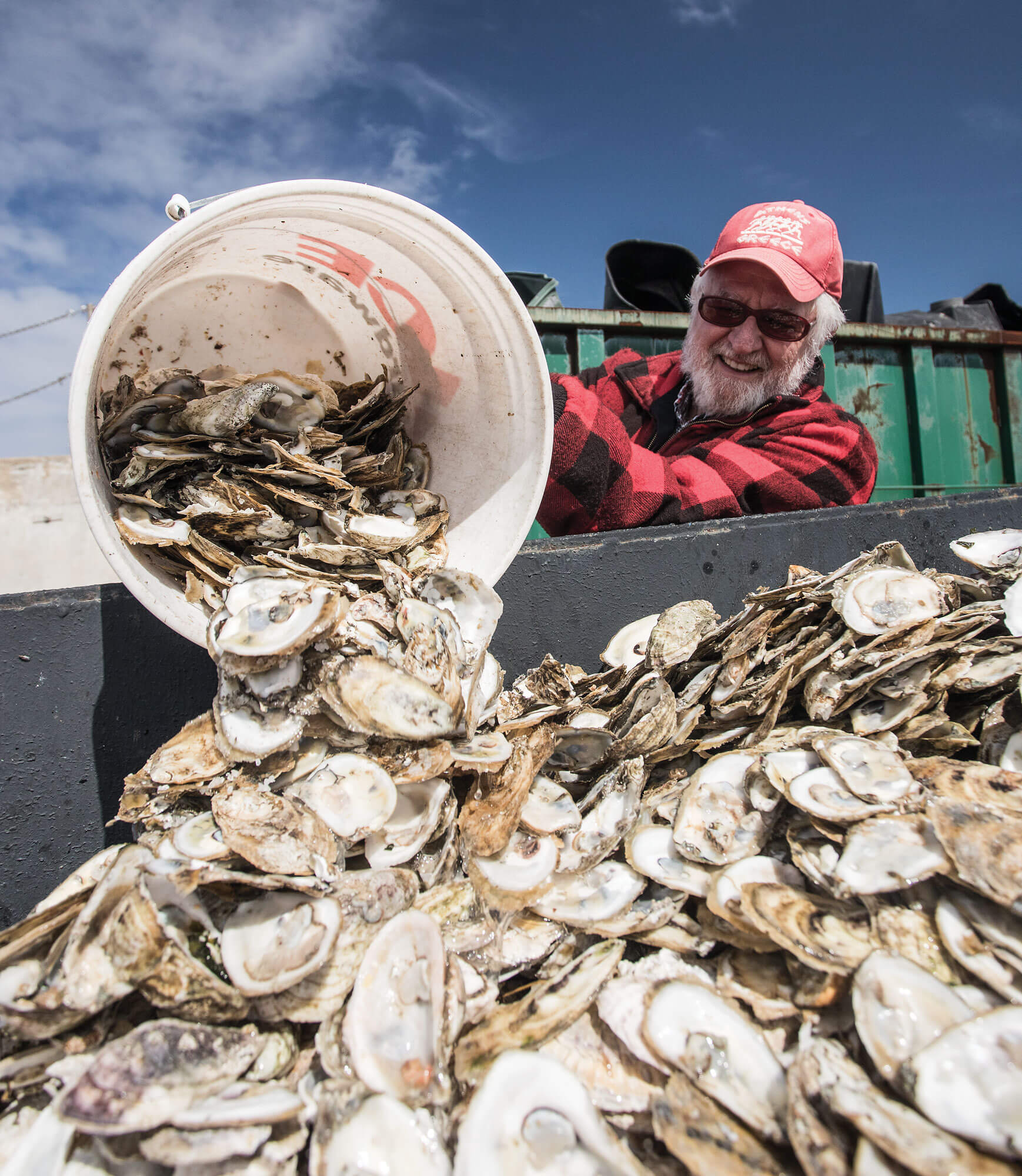 Bill Trimyer’s “bucket list” includes picking up oyster shells (here at Coastal Provisions in Southern Shores), loading them into the bed of his truck, and dumping them out at a designated collection site. photograph by Chris Hannant

“Sometimes I stop at a restaurant and just walk in and ask what they do with their oyster shells,” he says. “If the owner says, ‘I throw them away,’ I say, ‘How about throwing them my way?’” Today is one of those days. Trimyer stops in at a newish eatery called Steamers, requests the owner, and makes the ask. At first, the fellow is wary. But wary becomes cordial, and cordial becomes eager when Trimyer explains his purpose. “Leave me three buckets,” the owner says. He points to Trimyer’s truck, where a turquoise “Oyster Shell Recycling” decal is affixed to the windshield. “And can I have one of those stickers for my restaurant window?” Indeed he can. Another convert to the cause. And, hopefully, in time, another bed for a bivalve.