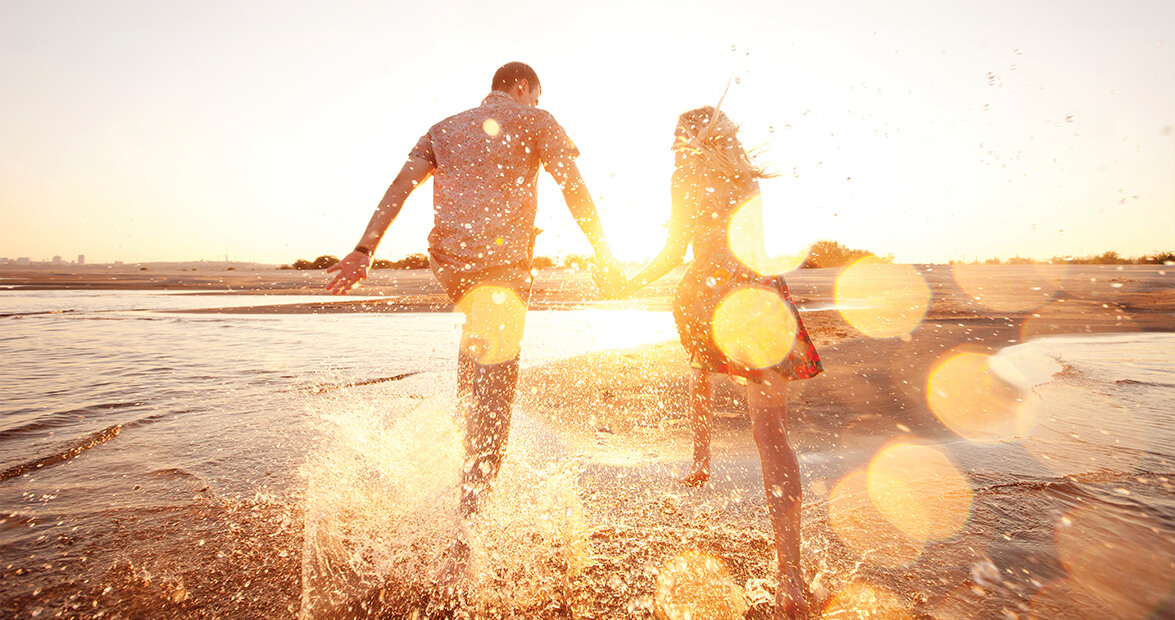 “In the Spring a young man’s fancy lightly turns to thoughts of love,” goes the Tennyson poem, but for the real stuff of romance, bring on summer. It’s doubtful that the phrase “hot ’n’ heavy” was coined in the pretty, prissy, delicate season of spring. Spring is Freddy Eynsford-Hill with his top hat and bouquet of flowers in My Fair Lady. Summer is Sandy and Danny dancing in a fair fun house in Grease. Now there’s a pair who knew about summer love: Summer lovin’, had me a blast. Summer lovin’, happened so fast.

The summer fling may not be a universal rite of passage, like puberty, but sooner or later, almost everyone has one. Let’s primarily thank — or blame — the weather. With warm weather, off come the clothes; fewer clothes mean more skin. More skin creates more opportunities for accidental (or otherwise) touching of hands, arms, hips, thighs. With touching comes friction, and friction produces sparks. Also with warm weather comes eating outside and swimming outside and cooking outside and lazing around outside, which create more opportunities for smooches and sparks and sparking, a term that long ago gave way to the less attractive but enduring, “making out.”

And then there are those lengthy days and drawn-out dusks, which allow more time for all of the above activities (and the above “accidents”).

It begins early, at about 10 years old, with spraying someone of interest — even if your pre-adolescent brain hasn’t quite discerned how “interest” translates — with the garden hose. By 11, puppy love progresses to the pool, where, when you’re shut-eyed and “it” during Marco Polo, the voice you listen out for the hardest (“Marco?” “Polo!”) belongs to a very specific tag target. The next summer, you’re acting like you’re practicing, when you’re really just showing off that perfect dive, or perfect jackknife, to impress someone who just happens to be watching, or standing behind you in the diving board line. “Ho hum,” your body language says. “I do this all the time, but just for you…”

By age 13, the tennis-court dances you scorned during past summer camp sessions seem like an excellent idea. An afternoon of wholesome canoeing or crafts is summarily ditched for verboten “cabin-squatting,” to decide whose clothes you’re going to borrow. If all goes well, before the last song ends, a counselor will have tapped you on the shoulder, murmuring, “Too much PDA.” Back home at family reunions (involving kin beyond first cousins), church suppers, softball games, or Fourth of July celebrations, putting ice down someone’s shirt screams “I have a crush on you” at only a few decibels lower than playfully knocking his or her face into their watermelon slice or ice-cream cone. Nothing complements a summer love like the melty, mushy, soft, sweet treats of summer.

Summer love is a staple in films and songs and books. The sine qua non of summer romance movies — not that Latin is on anyone’s mind during high-humidity months — is Dirty Dancing, filmed right here in North Carolina, as any true fan knows. (Still, I’m a Lake Lure person, and I’d like to know where on the lake, on what log across which creek or cove, Baby and Johnny Castle balanced — and then danced on to “Hey! Baby” by Bruce Channel.) And poor Benjamin Braddock in The Graduate. He’d just completed college, was minding his own business, floating on a raft in a pool. He probably thought Mrs. Robinson was going to be a summer fling. Watch and learn. In Early From the Dance, a 1989 novel by Hillsborough writer and Henderson native David Payne, two characters are seduced by their employers and their hedonistic lifestyle. During one summer. On the Outer Banks.

In country music love songs, it’s basically always summertime. The girls wear cutoffs and tank tops, and everyone drinks cold beer and hangs out on pontoon boats. Gary Lewis & the Playboys acknowledge that you’re probably going to “walk along the lake with someone new / have yourself a summer fling or two,” but hope that you’ll “save your heart for me.” Still, The Beach Boys get the prize, conjuring up visions and memories of harmonized summer love with “Surfer Girl.” (Yes, it’s Cali, but they throw us a bone in “California Girls”: “and the Southern girls, with the way they talk / they knock me out when I’m down there.”)

I’ll wager that summer jobs are behind more summer romances than bikinis. When you’re living paycheck to paycheck, sharing a cramped and crummy apartment or cottage, the glow of no-strings impermanence is irresistibly attractive. The person beside you making smoothies, or sitting in the lifeguard chair, or refilling the salad bar, becomes, by sheer proximity, irresistibly attractive, too. Human heat-seeking missiles have been detonated while people are slicing cucumbers and measuring chlorine. And really, weren’t sunglasses made for being able to intently observe your crush’s every move without their knowing your heart is pounding?

Over a card game or a beer keg. On a bench or bleacher or beach, with sand in every crevice. In Drivers Ed or SAT class or a Tilt-A-Whirl seat. Mowing the yard, hammering for Habitat, or serving at the soup kitchen. Fireworks in the sky. Lightning bolts in the distance. Sparks from the grill. Something’s on fire. Wait, it’s you.

Part of the appeal of a summer romance is that it has a built-in obsolescence, like, oh, I don’t know, a plaything, which works as a synonym for that seasonal beloved. Just playin’ around. Still, there’s a real reluctance on the part of people to revisit their summer romances. Often it’s just too embarrassing, and I get that. Usually that flame — especially in our do-you-know so-and-so state — is still alive and kicking, and it’s best not to wake that sleeping dog, which is a euphemism for recalled behavior that makes you cringe and look down at your lap. But just as porches and docks encourage kisses and confessions and professions of love, I’ll volunteer on behalf of those who remember the hopes and the gropes. One was a crush who crushed me instead. Pffft. He was a Yankee; what can you do? Another one — well, we’re still pals. My daughter spent the summer in Wyoming, where she fell in (summer) love with — who else? — a North Carolinian. After a summer working at Wrightsville Beach, my son brought home an Absolut vodka bottle filled with sand, which he placed front and center on his dresser. I didn’t ask. I didn’t have to. For years, stuffed in a drawer, I saved a calendar from one summer. On its white squares, I’d noted when I spent time with the boy I loved, and what we did together. Went for pizza. Swam at the rock quarry. Watched baseball. Saw Star Wars. Washed car.

On every calendar, there are invisible parentheses around June, July, and August that mean “Doesn’t Count.” Doesn’t count what you do, because those are the months of carefree freedom — from school, from rules, from parents, from cold weather and constriction and convention. While marriage shouldn’t be entered into lightly, a summer romance should be. You’re not signing on for life, for any kind of permanence or obligation beyond those lazy, languid months and the drowsy, forgiving bath of summer sunshine. Not an eternal flame; just a little short-lived something, temporal as ice in a summer drink, a flicker to recall in the dark of December, with a sentimental, secret smile.

This story appeared in print as “Summer Fling.”