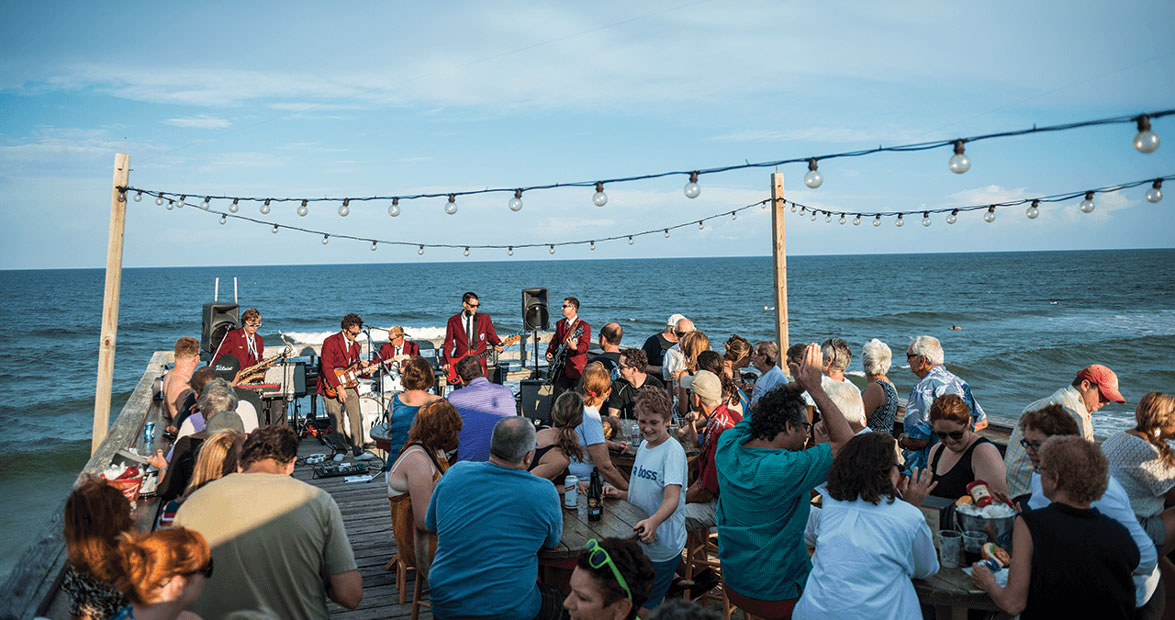 Piers are solid structures, built to withstand constant pounding by waves and the occasional hurricane. Piers aren’t supposed to bounce. Or shake. Especially on sunny days.

At Carolina Beach, the old Center Pier — better known as Tiki Pier — bounces. The pier also shakes sometimes. It has for years.

But there’s no need to be alarmed — the bouncing usually only happens on Thursday evenings, and the culprit of the quivering and shivering has been identified: surf bands.

To be fair, you can’t blame the bands — many of which road trip down I-40 from the Triangle area for a chance to jam on the beach. If anyone, blame the throngs of twisting, stomping, and mashed-potatoing beach-music fans.

“There’ve been plenty of moments toward the ends of the sets where you can feel the pier bumping along with the bouncing crowd,” says Seth Moody, a multi-instrumentalist who has performed with several bands on the pier, most recently with a new band, The Carvers Surf and Stomp Combo. Moody, who plays keyboard, guitar, saxophone, and a version of a theremin made popular by the Moog Music synthesizer folks in Asheville, is a core member of the latest incarnation of beach music — a sound that blends elements of classic beach music, ’60s garage bands, bluegrass, and even Moody’s ethereal techno-synthesizer sounds.

“Seth’s been playing on Tiki Pier since we opened 13 years ago,” says Abbie Sinclair, who, with her husband, Dave, owns the Ocean Grill and Tiki Bar. “He plays in the Hawaiian band Da Howlies, the first band that ever played on the pier, and, in our opinion, the start of it all.”

Although Sinclair credits Moody and Da Howlies — who still perform on Thursdays on the pier — with launching what has become a CB summer tradition, another name usually comes up when the discussion turns to Tiki Pier history: Fran. 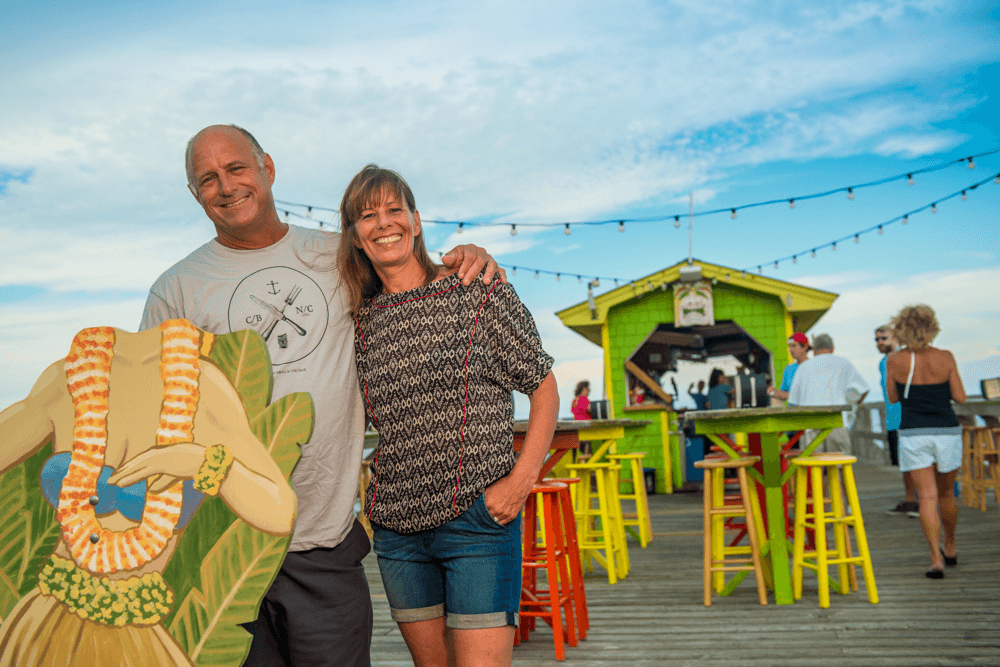 When Jimmy Pope bought the 22-room Golden Sands Motel in 1981, the Center Pier stretched from the back of his hotel through the dunes, across the beach, and out over the Atlantic Ocean. It was a nice draw for guests, but with the cost of upkeep, it didn’t do much for his bottom line.

“The pier was the biggest money loser I ever had,” Pope says.

On September 5, 1996, Hurricane Fran took care of that problem.

On the heels of Bertha, which had, earlier that summer, pounded the coast and destroyed the neighboring Kure Beach Fishing Pier, Fran shredded the Center Pier. Aside from a few stray pilings that still stand among the breakers, all that was left of the Center Pier was a stub of decking that ended at the shoreline.

“The entire beach was devastated,” Pope says of the effects of the Category 3 storm.

Whereas the family that owned the Kure Beach pier decided to rebuild, Pope tried to figure out something else to do between the hotel and the surf. In 1999, as the town was still rebounding from the storm a few years earlier, Pope added a restaurant to what had grown to be the beach’s first mid-rise motel, and he built a tiki bar on the end, on pier that Fran had spared.

The Tiki Pier was born.

Over the years, Pope expanded the Golden Sands into the 113-room property it is today. But he more or less got out of the pier and restaurant business, instead opting to lease them both to folks like Abbie and Dave, who operate the Ocean Grill and Tiki Bar from the end of February until cold weather arrives in late fall.

Abbie and Dave each bring their own set of interests and skills to the business. Dave — who had worked in kitchens across the country for 30 years before landing in Carolina Beach — is very much a back-of-the-house chef. His cooking style is simple: Make good food people like. He uses local seafood, delivered every day by a Wilmington distributor, in dishes that are easy to figure out without a lengthy description — shrimp hushpuppies, mahi tacos, grilled whatever-was-biting-the-day-before.

“I’m not ‘Iron Cheffing’ it. We give people what they want at the beach,” Dave says. 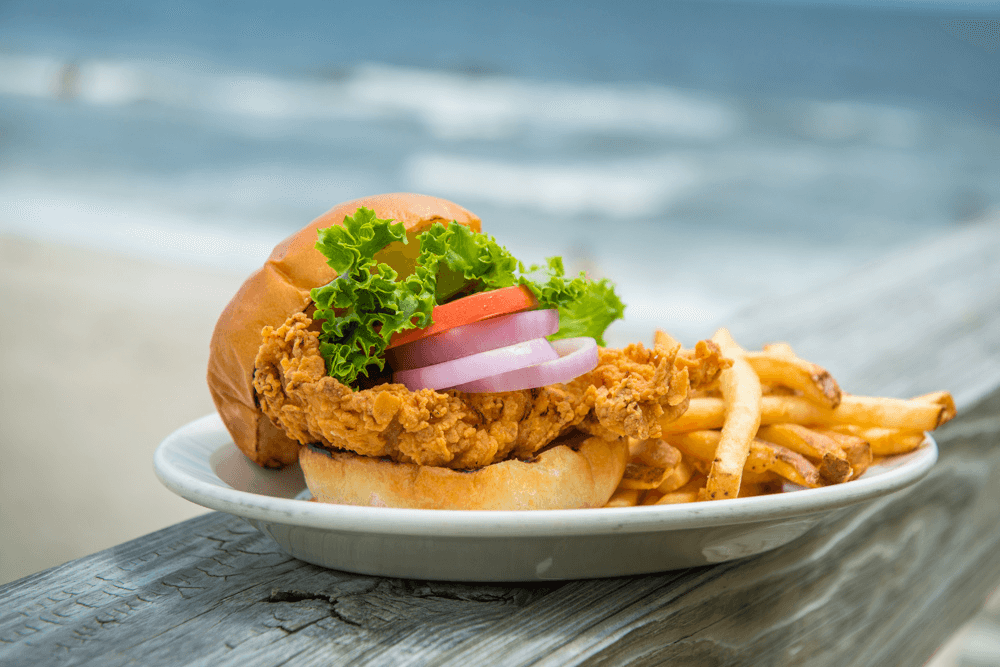 Everything served at the Tiki Bar is fresh. photograph by Emily Chaplin

Abbie — a set decoration buyer in the film industry — handles the front of the house, which comprises the upstairs dining room and downstairs bar, which were both remodeled over the winter, and the Tiki Bar. Her job includes lining up bands. She also takes a special interest in adding healthy elements to the bars’ drinks — tiki bar-worthy concoctions with fresh fruits and plenty of nectars, like agave and tamarind. The menu sports several standards — like the My Tiki Tai and an agave margarita — as well as new offerings that change from summer to summer. Debuting this year: The Noserider, made with coconut water, pineapple juice, fresh lime, and agave nectar (and coconut tequila, of course).

Two more Sinclairs, who aren’t on the payroll yet — Cameron, 12, and Drew, 9 — reinforce that it is very much a family-oriented restaurant. Their roles might best be described as PR.

“Yeah, the kids like to dole out ice cream to their friends on the beach because Dad owns the restaurant,” Abbie jokes.

In addition to their love for food and music, Dave and Abbie also bring another passion to their beachside bar and grill: surfing.

One of the better surf peaks — that is, where waves break to the left and right as they roll into shore — along the beach is behind their restaurant. And when the surf is up, it’s not unusual to find the entire clan in the water. That means that sometimes operating on beach time is inevitable — “when we open the flaps on the tiki bar, people will be here,” Dave says. Usually, that’s around noon, but the Sinclairs recommend checking the restaurant’s Facebook  page for that day’s hours.

Beach time of a different sort comes into play in the evenings.

During the week, the tiki bar closes around 9 — even on Thursdays when bands play — and by 10 on weekends. Part of the reason for the early last call is so that guests at the adjacent Golden Sands can enjoy the ocean under the stars without the hum of the bar below. Also, for most people, a day at the beach really does end after the sun sets.

“You have to realize, at the Tiki Bar, and on the beach, folks have been partying all day, so 9 p.m. seems more like midnight,” Seth Moody says.

Moody says that when his band plays, they prefer to wind up the evening, as opposed to winding things down.

“The Carvers usually end with a wild instrumental called ‘Pop the Top,’ ” he says. It’s one of those songs that gets the pier shaking, no matter who is in the crowd — young and less young; locals and locals just for the week.

“The goal is that every person can relate to something, but it all works together,” Abbie says.

Moody’s take on the Thursday night Tiki Pier crowd: There’s usually a stylish contingent from Wilmington — who, he says, are distinguishable by the absence of flip-flops — Carolina Beach locals, and the tourists who are drawn to the sound of the music. 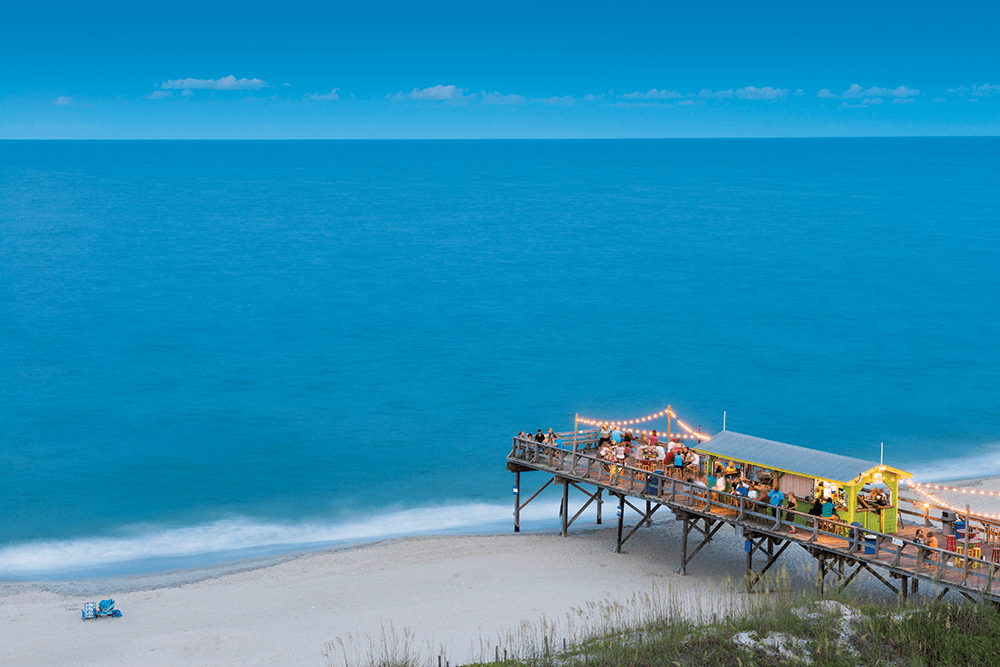 On clear, calm Thursday evenings, shell hunters along Carolina Beach — and probably a fair number of fishermen out on the water — hear the sound of beach music long before they see the Tiki Pier. photograph by Emily Chaplin

“As many people as there are actually on the pier, there are three times as many down below on the beach — kids dancing, surfers, families with coolers.”

Once the music ends, the crowd disperses. Some head to the Ocean Grill bar for a nightcap. Others get the last bit of dancing out of their system on the beach. Inside the restaurant, the crew closes down the place. Abbie and Dave are probably helping with cleanup. Unless there are some decent waves, of course.

Who can resist good surf?