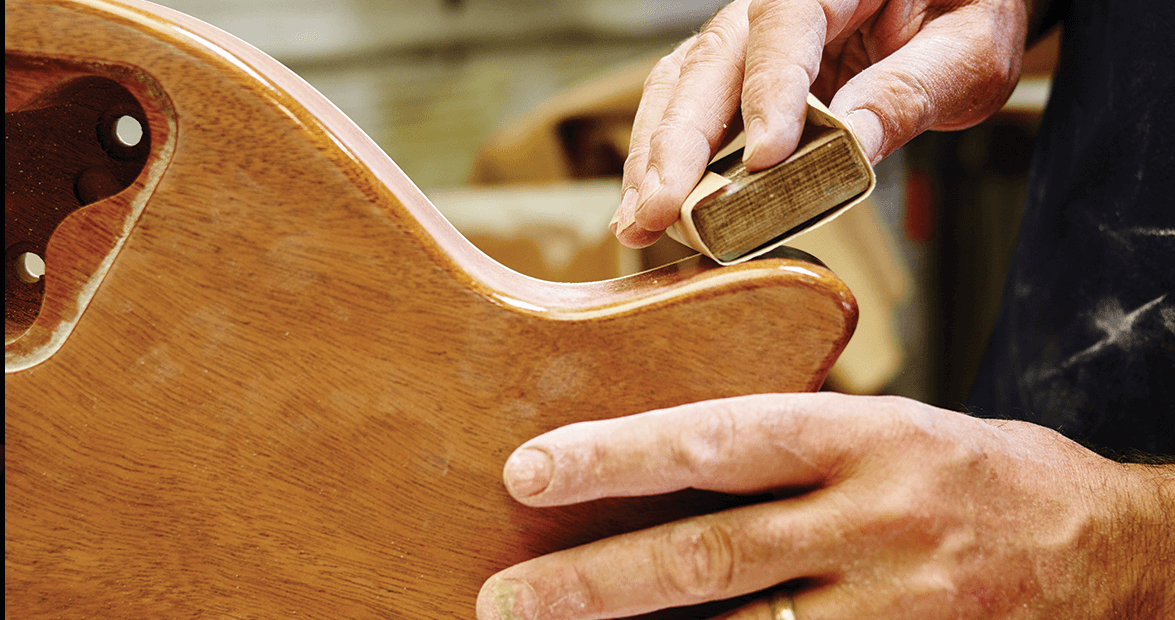 If 17-year-old Terry McInturff could have leapt into the future to visit his present-day self, the shock would have knocked him out of his bell-bottoms.

As a teenager, McInturff idolized the rock-guitar heroes of the 1970s, including Pete Townshend of The Who and Led Zeppelin’s Jimmy Page. A guitarist himself, McInturff dreamed of the rock star life: money, platinum records, travel, women.

Today, McInturff is indeed a dynamic figure in the world of electric guitars. He’s been featured in countless magazines, built a fan base on both sides of the Atlantic, and has worked for a number of renowned guitarists, including Eric Clapton, Brad Whitford of Aerosmith, and Robert Fripp of King Crimson.

But none of those guys care if this long-haired rocker can play a single note. They all want to know the Siler City guitar man because he builds instruments that make their own licks sound outrageous.

“Terry is one of the top three builders of solid-body guitars in the world,” says Oz Hofstatter, who owns Austin Guitar House, a high-end guitar shop in Austin, Texas. When Hofstatter opened his store, the first guitar he stocked was a McInturff because he wanted customers to know that he meant business. 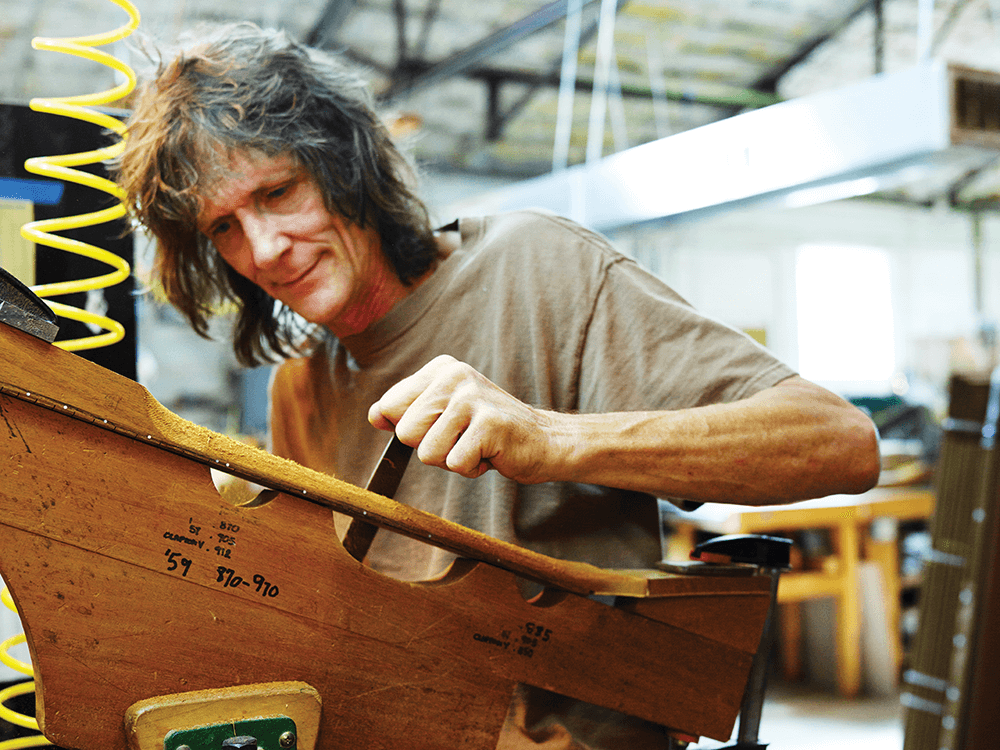 At last count, Terry McInturff has made 3,600 electric guitars. He personally selects a wood, whether Alabama swamp ash or African mahogany, and listens for its individual vibration. photograph by Joey Seawell

Despite his fame, McInturff is an affable, down-to-earth guy, the sort who’ll welcome an internationally- known musician to his shop one day, and Chatham County Cub Scouts the next. His woodworking shop is the showstopper for tour groups who visit the N.C. Arts Incubator in downtown Siler City, where dozens of craftspeople, including potters, painters, and fiber artists, rent studios. “The universal reaction is, ‘Oh my God, I can’t believe he’s here,’ ” says Jon Spoon, the Incubator’s executive director. “They don’t expect to find this level of artistry in the middle of nowhere.”

As the ’70s melted into the ’80s, McInturff played in enough Triangle-area bands that lengthy footnotes would be required to do his record justice: The Gillettes, Kick the Future, DeMilo With Arms, and Safehouse are just a sampling of the groups that have featured his aggressive guitar playing.

But McInturff’s rock aspirations began to fade as the close of the ’80s dovetailed with the ascent of his 30s. Despite interest from record labels over the years, none of his bands caught fire outside the region. “I got burned out on the scene,” McInturff says of the Triangle’s rock ’n’ roll atmosphere. “It didn’t look like a good career option for me anymore.”

McInturff’s day jobs, though, always centered on guitar repair. Eventually, he built a few of his own. He started to attract admirers, with favorable press in guitar magazines helping to spread the word.

That’s how guitarist Chuck Garvey, of Cincinnati, and a founder of the jam band moe. first learned of his work. He purchased a McInturff and played more than 500 shows with a guitar that he likens to a finely tuned sports car. “I have to be really careful with it,” says Garvey from a tour stop in California, and laughs. “If I overdo it, I crash and burn.” He’s such a fan of McInturff’s “works of art” that he’s been to Siler City to visit the shop. “Terry is an amazing guy. I feel fortunate to have met him.”

With professional guitarists calling on him, McInturff could live anywhere in the country, but he chooses to reside in rural North Carolina. It’s his home, and his son lives nearby.

And anyway, McInturff is much too happy with his job to consider a move. He recently attracted new investment, and he has big plans for expanding the business. “For better or worse, I never build a guitar that I wouldn’t want to play,” he says. “So, basically, I build guitars for myself and hope that other people like them.”

Led Zeppelin’s Jimmy Page liked them so much that he bought two, but it takes more than the occasional purchase by a legend to keep the shop doors open. Not that McInturff has a problem selling guitars to regular people. He’s built more than 3,600, and it’s been more than 17 years since he started work on a guitar that wasn’t presold. 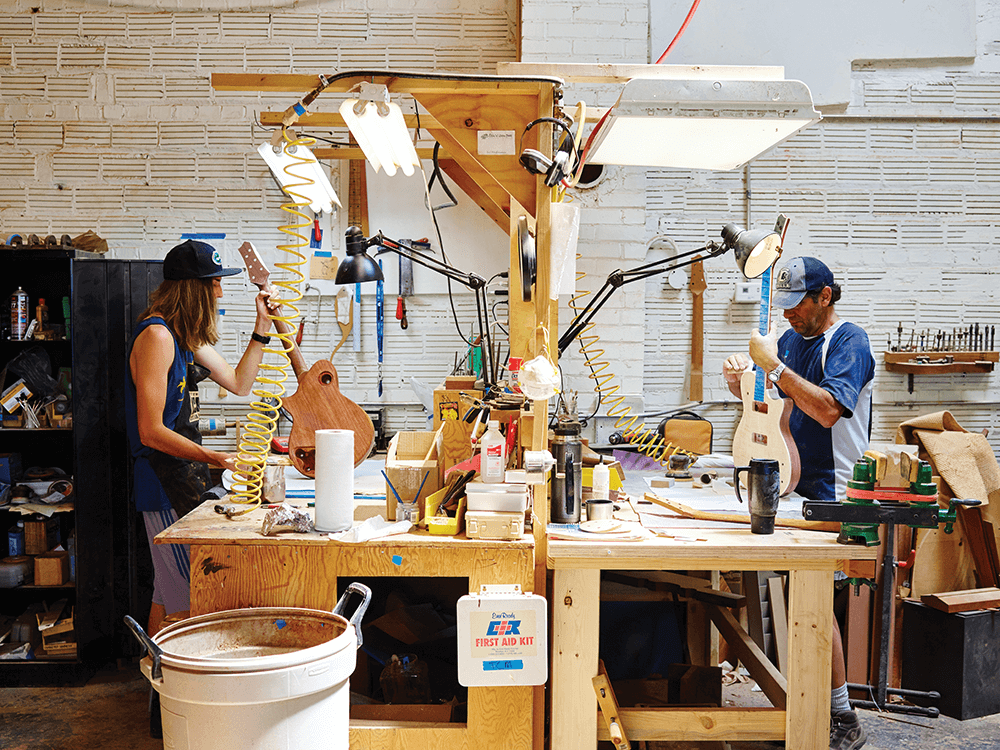 The factory where these glamorous instruments are made is decidedly unglamorous. McInturff’s large studio is a dusty, high-ceilinged room filled with the tools of the trade, both primitive — sandpaper glued to blocks of wood — and sophisticated: The high-tech paint room resembles something from an automotive body shop. McInturff is known for his attention to the guitar’s finish, applying multiple layers of a thin lacquer until it meets his precise specifications.

These kinds of details drive the retail prices for McInturff’s guitars, which start around $6,000. He sources his wood from all over the world. Rosewood from the East Indies, African mahogany, and Alabama swamp ash all have their places in his guitars. The bodies and necks are created separately; after they’re joined, they receive a finish, and are eventually outfitted with electronics that he purchases from outside manufacturers.

But it starts with the wood, with which McInturff has a nearly spiritual relationship. A spot near the studio’s main entrance is filled with stacks of it, which looks to a layman like nothing more than a pile of  wood one might find at the lumberyard. McInturff’s wood, though, is instrument-grade, and only the boards he personally selects will ever be used to build a guitar. To guide his choices, he listens to the vibrations of each piece.

In building a guitar body, for instance, McInturff will mill a rectangular piece of wood to the correct thickness. Before going further, he’ll suss out its vibe. To demonstrate, he holds an in-progress body to his ear, taps his finger to the wood, and declares the note that emanated from it to be a “B.” “The trick is to find the right body and the right neck so that it vibrates as a unit in the way that I require,” he says, smiling.

McInturff’s exactitude is legendary in the industry. The wooden surfaces of his guitar necks, across the width and length, are level to within one-one thousandth of an inch. He takes particular pride in the playability and durability of his necks, which are the most fragile wooden parts of the guitars.

“If the musician bonds with the feel of the guitar neck,” McInturff says as he slides his hand across an unfinished neck, “he might be willing to overlook some other aspects that might be less desirable.”

“Like the price,” suggests assistant Mel Freedman, unable to resist.

And with that, McInturff throws back his head, shakes his rock ’n’ roll mop, laughs, and says, “Dig it.” Then he puts Buddy Holly’s Greatest Hits on the CD player, clicks on the drill press, and gets back to work.