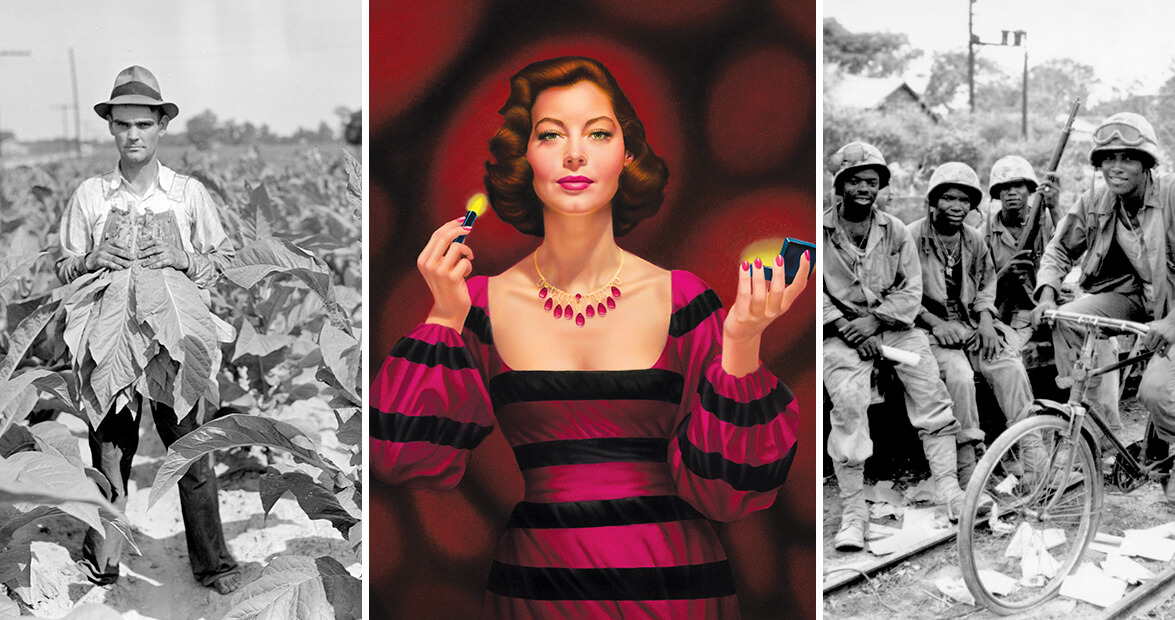 The 1940s is the decade when Depression turns into prosperity, when disillusionment gives way to optimism, when want yields to plenty — and when domestic peace is shattered by world war.

It is the heyday of Hollywood movie stars like Ingrid Bergman, Humphrey Bogart, Lauren Bacall, Katharine Hepburn, and Clark Gable. A farmer’s daughter from a North Carolina country crossroads called Grabtown — Ava Gardner — personifies the big-screen mythos of dangerous, seductive beauty as Kitty Collins in the film version of Ernest Hemingway’s story “The Killers.” The movies turn glamour into a national obsession.

But as the decade opens, North Carolina remains largely a place of farms and small towns, its people aware of the new, faraway war in Europe and slowly emerging from hard times as if waking from a bad fever dream. Many farmers still plow behind mules. Milk and beer are delivered by horse-drawn wagons. When night falls across the Coastal Plain between towns, across the great swath of Piedmont farmland, over the mountains of the western counties, the darkness erases the land. An airmail pilot flying the route from Richmond to Raleigh and on to Charlotte would see a blank map below, beyond the loom of the cities.

In 1940, fewer than one in four farms is powered by electricity — leaving more than 200,000 others in the dark. Little more than a decade later, nearly all farmsteads are electrified. Indoor plumbing, too, comes to rural communities. Men and women are working again and earning real wages.

But progress does not come equally to all. Waiting rooms and restrooms are designated “white” and “colored.” Blacks often are paid less than whites for the same labor. Even black men who enlisted in the Civilian Conservation Corps, where they earn the same $30 per month as their white counterparts, are housed in segregated camps. 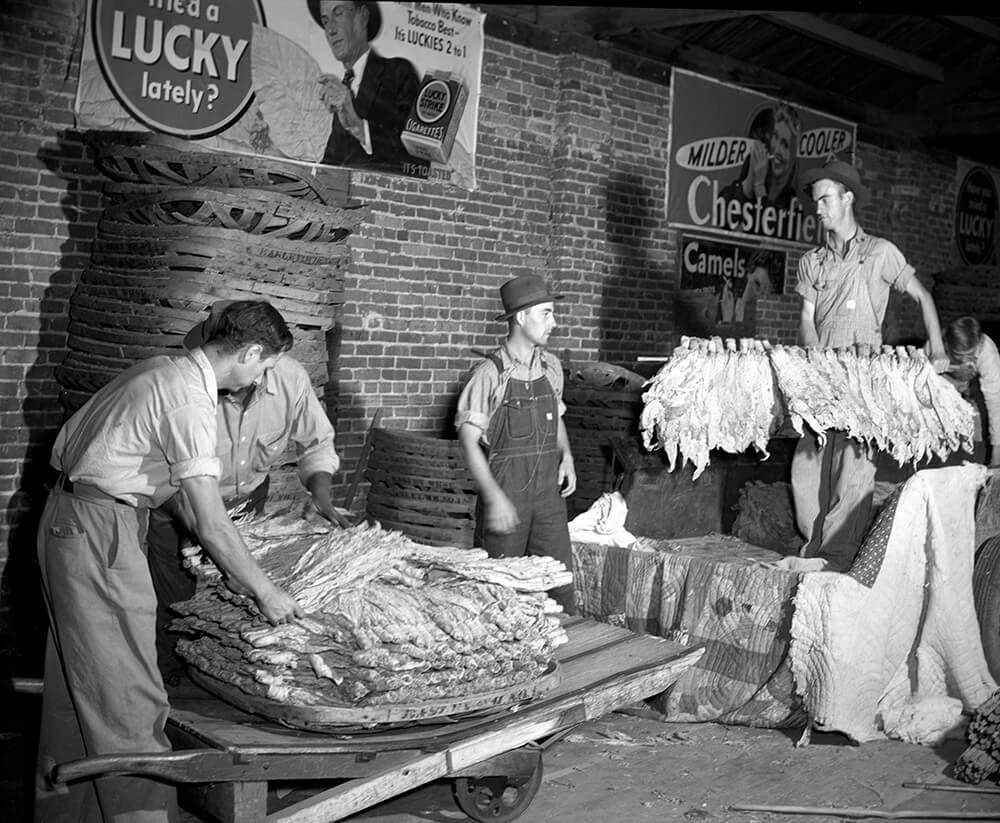 After a long summer spent growing and curing brightleaf in 1942, farmers bring the crop to the opening day of the tobacco auctions at Eastern Carolina Market. photograph by State Archives of North Carolina

Tobacco is king — the greatest wealth generator in the state. The fall tobacco auction is the most important event of the season, and the market at Wilson is the largest in the world. Cigarettes — ubiquitous both on the screen and in the audience of local movie houses — sell for 12 cents a pack.

There are bargains to be had for those with cash. Ladies’ wool winter coats can be bought at the Collins Department Store in Charlotte or Whiteville for $2.75 each, boys’ all-wool suits for just $1.19. At the Pender Quality Food Stores, spinach goes for 10 cents a pound, Land O’ Lakes American cheese for 21 cents a pound, and skinless franks for 19 cents a pound. An 18-ounce loaf of bread costs just 8 cents.

Automobiles are sleek and fast — like the 1940 Ford Deluxe V-8 coupe favored by moonshiners — and promise not only speed, but also status. Whiteville Motors sells the 1940 Dodge Luxury Liner coupe for $725. Its competitor, Braxton Auto Service, offers an Oldsmobile sedan (“Feels, Measures Bigger!”) for $853. The gasoline they guzzle costs 18 cents per gallon.

The traveling big bands play hotel ballrooms in the cities and small local auditoriums in the heartland in full throat, and the radio reaches into newly electrified farmsteads, an invisible network of voices and music: speeches, comedies, variety shows, swing bands, and the border music of high lonesome tenors and twangy guitars and fiddles.

One of those radio stations is WBT in Charlotte — the first fully licensed commercial radio station south of Washington, D.C. It began in 1922 as an amateur station broadcasting just four hours a day at 100 watts. By 1944, WBT is the only station in the Southeast on the air 24 hours a day.

All across North Carolina, the 1940s is a decade of economic and social transformation. On the Roanoke River, the Roanoke and Tillery Farms projects — programs of President Franklin D. Roosevelt’s New Deal — lift hundreds of white and black families out of tenant-farming poverty to become owners of their own farms.

Every small town fields a newspaper, and most cities more than one. Daily headlines announce Russian advances in Finland, German U-boats in the Atlantic, and rising tensions between the Roosevelt administration and the Japanese government. The public mood remains optimistic, even ebullient — as the impending war brings jobs and prosperity to many communities — until the stunning attack on Pearl Harbor and the declaration of war, which bring anxiety, separation, uncertainty, and loss.

Fort Bragg, an old field-artillery training ground slated for decommissioning, instead opens its gates to an influx of 100,000 soldiers — including all five airborne divisions in the U.S. Army. Nearby Fayetteville — population 17,000 — is overrun with troops preparing to wage a new kind of mechanized warfare.

A 14-mile-long swath of coastal land outside Jacksonville is chosen to host a new Marine Corps base — Camp Lejeune — where as many as 42,000 Marines train in the overgrown coastal thickets and on the Onslow Bay beaches. By executive order of President Roosevelt, the Marines enlist the first of 20,000 African-Americans to train in a segregated base called Montford Point.

By 1942, North Carolina — with more than 100 military installations — is home to more soldiers, sailors, Coast Guardsmen, and Marines than any other state. More than 10 percent of the state’s population — 362,500 men and women — serve in the armed forces, and more than 9,000 never return home.

Just south of Wilmington, a new fleet of cargo ships sprouts on the east bank of the Cape Fear River almost overnight: the Liberty ships. They slide down the slipways at the rate of one per week for more than four years.

To power the growing defense industry, the Tennessee Valley Authority constructs the massive Fontana Dam on the Tennessee River in 1942, finishing the project in just three years. The 480-foot-high dam — the tallest east of the Rockies — is built of three million cubic yards of concrete more than half a mile above the river and generates 304 megawatts of electricity per day.

To house the 5,000 workers and their families in such a remote location, engineers design an entire town of prefabricated houses and dormitories: Fontana. After the dam is completed, all the temporary workers leave town, and it remains virtually deserted until it reopens as a private resort in 1946.

Natural disasters, fights for workers’ rights, and disease take their toll on North Carolina throughout the decade.

In August 1940, five days of torrential rain in the western counties causes a great flood and 2,000 massive landslides on mountainsides clear-cut by timber companies. Entire communities at Grandfather Mountain, Deep Gap, and Mortimer are swept away. The railroad to Boone is washed out, never to run again. NC Highway 411 to Wilkesboro is cut. The French Broad wipes out the bridge at Marshall, and the Tuckasegee rampages. That same month, more than 21 inches of rain turn downtown Boone into a muddy lake. At least 16 people are killed.

Hundreds of miles to the east, the coast is slammed by the Great Atlantic Hurricane of 1944, which damages or destroys almost 800 homes. On Hatteras Island, a federal barrier dunes project is completed to protect the shore from future storms, and, at long last, the state begins paving sandy U.S. Highway 12.

Textile factory production ebbs and flows — then revs up to meet the demands of the new war for uniforms, tents, tarpaulins, parachutes, and bandages. Tobacco factories cope with their own labor unrest — culminating in a strike by 10,000 workers at the R.J. Reynolds plant in Winston-Salem. The tension between labor and owners plays out at textile and tobacco mills across the state as part of “Operation Dixie,” an attempt to champion workers’ and civil rights — but ultimately the owners win. 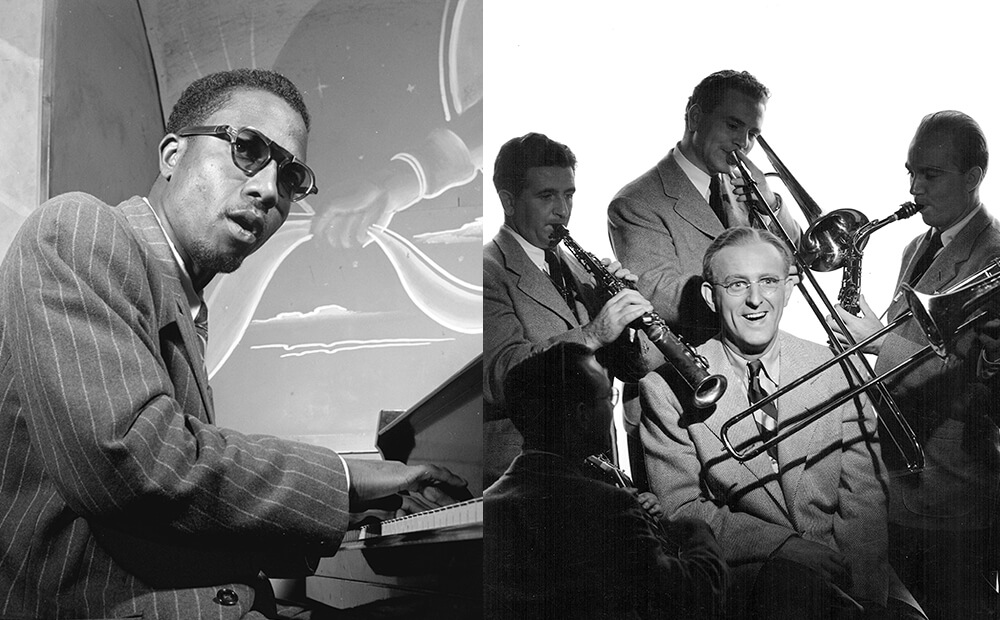 The music of the decade has deep roots in North Carolina: Rocky Mount gave the world composer and jazz great Thelonious Monk, as well as famed bandleader and 1940s radio personality Kay Kyser. photograph by Library of Congress

In the far west, the Eastern Band of Cherokee fights against termination of the protected status of their lands — and for tribal identity. The Cherokee Historical Association actively promotes the Eastern Cherokee legacy. Alert to the postwar tourist crowds — arriving in the family automobile — the Eastern Cherokee stage performances to celebrate their culture and build a hotel and visitor center at the entrance to Great Smoky Mountains National Park, which, by 1950, becomes the most visited park in the nation. Cherokee war veterans now insist upon the right to vote — a right previously denied them.

In Chapel Hill and Raleigh and other cities, returning veterans head to campuses to take advantage of the G.I. Bill of Rights. New state colleges open in Wilmington and Charlotte. Black Mountain College — offering a progressive curriculum that integrates academics, the arts, and practical skills — is going strong.

Presiding over the wartime half of the decade from the governor’s mansion in Raleigh is Joseph Melville Broughton. A rock-solid public servant with a sober demeanor behind wire-rimmed glasses, he beats six Democratic primary opponents in the 1940 gubernatorial race and wins by the largest majority up to that time. As governor, he raises teachers’ salaries, institutes a retirement plan for state employees, and extends the school calendar to nine months, and also leads other progressive achievements in health care and the corrections department.

His leadership carries the state across the threshold of a new era of electrified farms, burgeoning cities, military preparedness, educational progress, the first significant stirrings of racial equality since Reconstruction, and an economy that is paying off for North Carolinians in all walks of life.

The glamour matures into substance. The grinding poverty of the Depression is banished for good. The war has been won. Across the great rural hinterland, the darkness is spangled with a scattered constellation of new electric lights.

Coming in January: The Liberty Fleet sets sail out of Wilmington’s shipyards.

Acknowledgments:
The author wishes to acknowledge the following people and sources for their contribution this story: