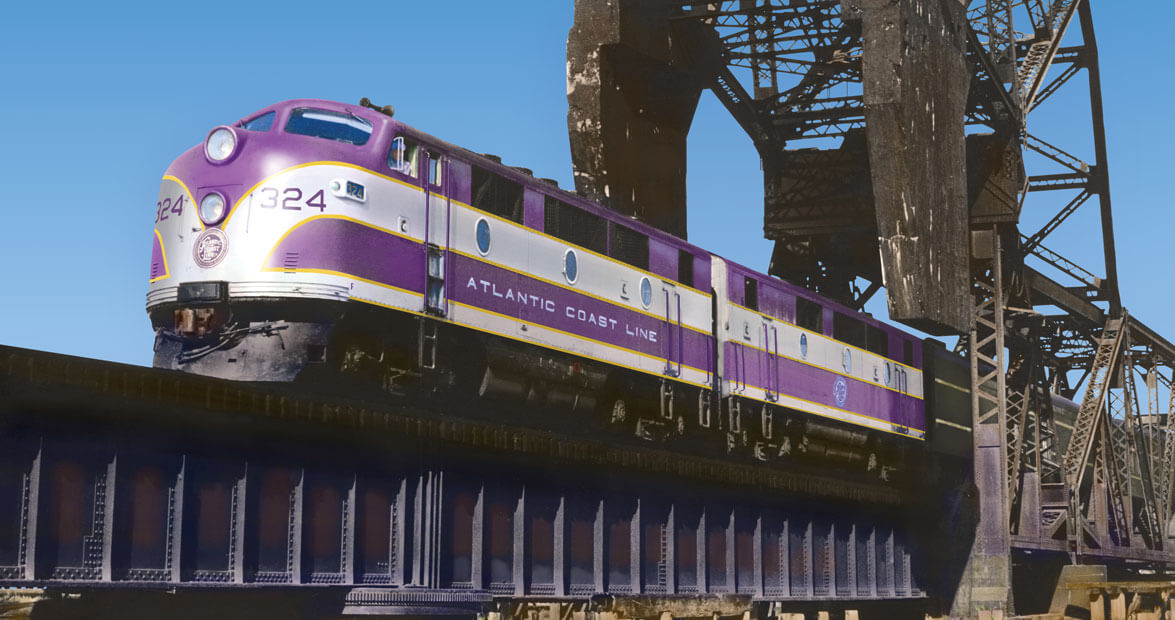 As fleets of family automobiles jam the new highways and passengers take to the sky aboard Piedmont Airlines and other carriers, the era of mass rail travel is coming to an end — though in 1950, that seems unthinkable to the millions for whom railroads have always been reliable. Rail travel enjoys an aura of romance and adventure, steeped in history and imposing physical presence — a network of rights-of-way, trestles, and tunnels carved into the land itself. During the war, railroad platforms set the stage for dramatic leave-takings and homecomings. No car horn or jet engine can stir the deep thrill of longing carried by the sound of a far-off train whistle in the night.

Yet while freight-carrying remains profitable, passenger service requires an ever-increasing investment: dining and sleeping facilities, large stations, and wages for train crews and hospitality staff. And federal regulations require carriers to provide service in the public interest to remote locations, where ridership is thin. Wartime travel during the early 1940s provided a surge in demand — 95 billion passenger miles in the peak year of 1944 alone, more than four times as many as before the war. But now, demand is receding to prewar levels — and being eroded further by energetic competition.

At the 1954 meeting of the National Association of Railroad and Utilities Commissioners, the “special passenger deficit problem committee” reports that the loss of passenger traffic has escalated “to a serious threat to the economic stability of the railroads,” concluding, “it’s going to be difficult to convince railroad management of the wisdom of voluntarily investing more of their rapidly vanishing capital funds into better passenger equipment in the face of today’s unfavorable prospects of gaining any return on such investment.”

By the mid-1950s, the airlines have siphoned off many first-class travelers and reduced coach travelers by a third. What seems to the rail traveler like a prosperous enterprise is, in fact, one that is struggling to break even.

Railroads have been the arteries of the state and nation since before the Civil War, reaching from the Coastal Plain deep into the mountains, knitting together cities and states on every point of the compass. In 1840, the Wilmington & Raleigh line (later Wilmington & Weldon) in North Carolina was the longest continuous stretch of track in the world, 161½ miles. During the Civil War, it became an iron lifeline for Confederate troops in Virginia, hauling troops and supplies north from the blockade-runners’ port of Wilmington.

Since 1900, the W&W has been incorporated into the Atlantic Coast Line (ACL), whose busy system of rails serves the Eastern Seaboard from Richmond, Virginia, to South Florida and inland as far as Birmingham, Alabama, and also connects with westbound routes. It is famous for its New York-to-Miami service, its Florida-bound trains christened with colorful names: Vacationer, Florida Special, Everglades, Palmetto, Miamian, Florida Arrow, Gulf Coast Limited, and Havana Special. Champion, which originated in 1939 to compete with the Seaboard Air Line’s Silver Meteor, is named for ACL President Champion McDowell Davis.

Like its predecessor, the W&W, ACL is headquartered in Wilmington, in 1950 a fast-growing city of about 45,000. Some 1,500 local men and women work for ACL, which occupies an extensive complex of offices, maintenance sheds, machine shops, freight yards, and a roundhouse for rotating engines onto a spiderweb of tracks, as well as a station and long platform sheds. Their presence near the riverfront keeps the downtown busy. And ACL injects an annual payroll of $6.5 million into the city’s economy. 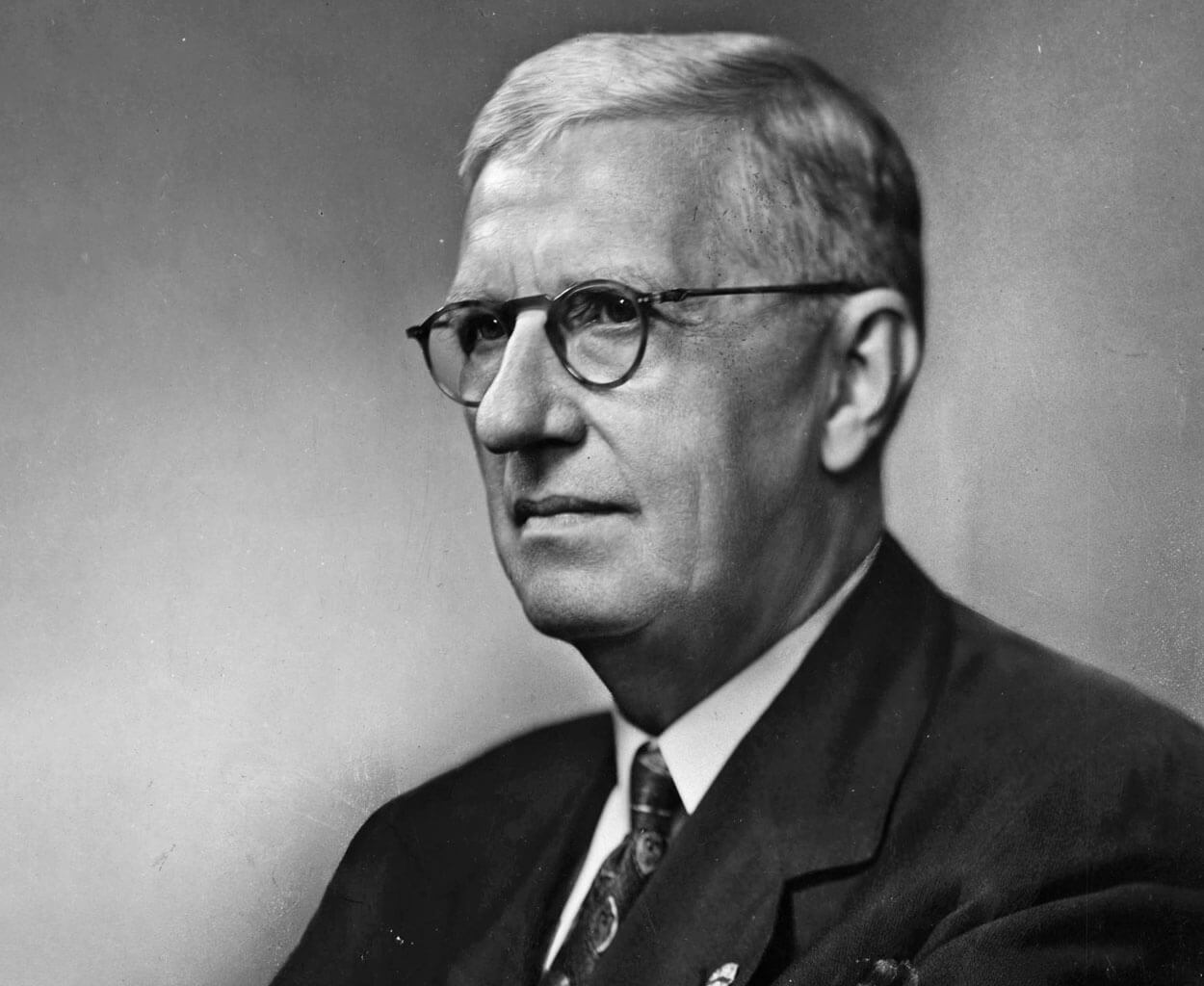 Tall, self-assured, and with a penchant for colorful profanity, Champion McDowell Davis was known for being a boss who demanded perfection. photograph by New Hanover County Public Library, North Carolina Room, and R.L. Long/Larry Goolsby Collection

Wilmington lies between Richmond and Jacksonville, the line’s Florida hub. But the city is also east of the main line, located on the jutting coastal elbow of the state. Trains start in New York and travel to Washington, D.C., hauled by locomotives from a rival line like the Pennsylvania Railroad; from D.C. to Richmond via the Richmond, Fredericksburg & Potomac Railroad; and then change to ACL engines to run on ACL-owned track. But the through-trains don’t come to Wilmington — instead, they cut straight across from Wilson to Florence, South Carolina, then continue south. Wilmington is the end of the line — each day, one or two cars are shunted to Wilson or Rocky Mount to be coupled to trains like Vacationer or Champion. Just one or two local trains a day serve the city.

ACL began its program of “dieselization” — updating its fleet of steam locomotives to diesel units — in 1939, but the war slowed the transition: Every locomotive was pressed into service, ferrying troops and material, as well as civilian passengers. But by 1955, most of ACL’s black steam locomotives have been sent to the Emerson “boneyard” in Rocky Mount, where salvagers cut them apart for scrap. The new locomotives are bullet-nosed, streamlined E-series diesels, built by GM’s Electro-Motive Division and painted with royal purple livery accented by a broad silver stripe trimmed in yellow — a color scheme chosen by Champ Davis.

Despite the growing popularity of automobiles and airplanes, trains remain safer than either alternative: In 1951, passenger deaths per million miles traveled due to rail mishaps are one-third those of airlines. Yet the constant traffic engendered by the war has worn out track, stations, and rolling stock.

Upgrading track is an urgent matter of safety. On December 16, 1943, a damaged rail set off a tragic chain of events: The southbound Tamiami West Coast Champion was passing through Robeson County when it crossed a split rail at 85 miles per hour. Two Pullman sleepers and a dining car jumped the tracks — and came to rest partially blocking the northbound tracks. By the time the engineer of the northbound Tamiami East Coast Champion was aware of the blocked track ahead, there was little he could do to stop a quarter-mile of speeding steel. The northbound Champion slammed into the derailed train with explosive impact. Eight of its 16 cars jumped the track, and three telescoped into one another. Bodies were hurled through the air and crushed inside the steel carriages. Seventy-two passengers died, making it the deadliest railway crash in North Carolina history.

In its investigative report, the Interstate Commerce Commission noted that more than 60 accidents had been caused by defective rails since 1939, most of them nonfatal. 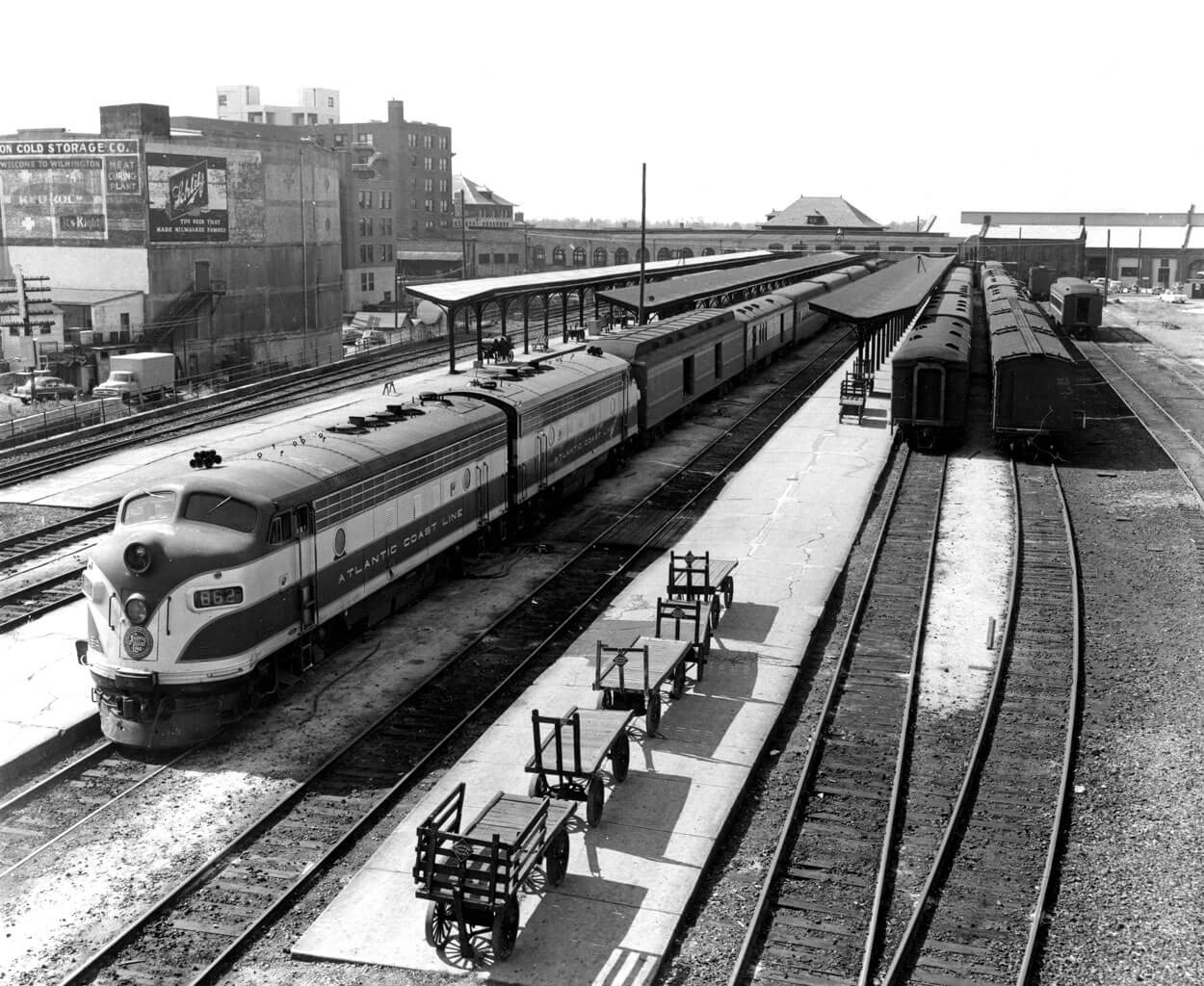 Now, with the war years behind, Champ Davis begins a comprehensive program to upgrade ACL rails and other infrastructure and replace aging passenger cars — for now, defying the daunting odds of turning a profit.

Through his own long career, Davis epitomizes the rise of railroads from a chancy beginning to a preeminent position in America’s culture and economy. The son of a timer for the W&W, he started as a messenger boy in 1893 at age 13; by 1942, he was running the “standard railroad of the South.” He works from his rolling office car, touring stations during weekdays and home in time for the weekly Sunday morning staff meeting. Among the innovations he has introduced: centralized traffic controls; reflective paint on station signs, mileposts, and car ID numbers; and, on the improved double-tracked mainline, a breathtaking speed limit of 90 miles per hour for passenger trains.

Davis has prospered by adapting to the times, and so must ACL. The tremendous pressures of catering to trainloads of servicemen and -women has made the railroad staff expert at logistics: storing and preparing food, feeding passengers in continuous shifts, efficiently managing sleeping arrangements, sorting and stowing luggage. Now, they put that expertise to good use.

The aura of leisurely elegance is enhanced by celebrities — in 1951, the abdicated Edward, Duke of Windsor, and his wife, Wallis (Simpson) Windsor, sign an ACL menu card, endorsing the claim that the line is fit for royalty.

To pass the time, ACL offers movies, games, and music in the club car, along with special entertainments. “All aboard the ‘Florida Special’ for SUN ’N FUN FASHIONS!” reads a broadside in the ACL News for March-April 1959. It advertises in-ride fashion shows in the club car, featuring swimsuit models showing off the latest beachwear.

But across the country, passenger revenues have still been declining steeply. Railroad executives seek the right to petition the federal government to allow them to jettison unprofitable passenger routes. Partly, this is so that they can concentrate their efforts and resources on freight service, which remains profitable — though it, too, has slipped. The Transportation Act of 1958 allows them to do just that, if the service is not “required by public convenience and necessity.” Never again will passenger rail service be as widespread and familiar as it has been for the first half of the 20th century.

In Wilmington, the shifting economy of rail service takes an ominous turn. Against the opposition of Champ Davis, the board of ACL decides to relocate its headquarters to Jacksonville, Florida. The move is announced on December 15, 1955 — known forever after as “Black Thursday” — but will await the completion of a towering new office building.

When construction is complete, in July 1960, ACL packs around 900 families aboard special trains bound for Florida, complete with boxcars full of their household belongings and flatcars full of their automobiles. The red-brick complex of roundhouse, sheds, shops, and offices is mostly demolished, the land deeded to the city for construction of a junior college: Cape Fear Technical Institute. One of its trustees is a familiar figure, now retired from the railroad: Champion McDowell Davis.

The station remains a little longer — until 1968, when the last passenger train pulls out of Wilmington, and a way of life disappears down the tracks.