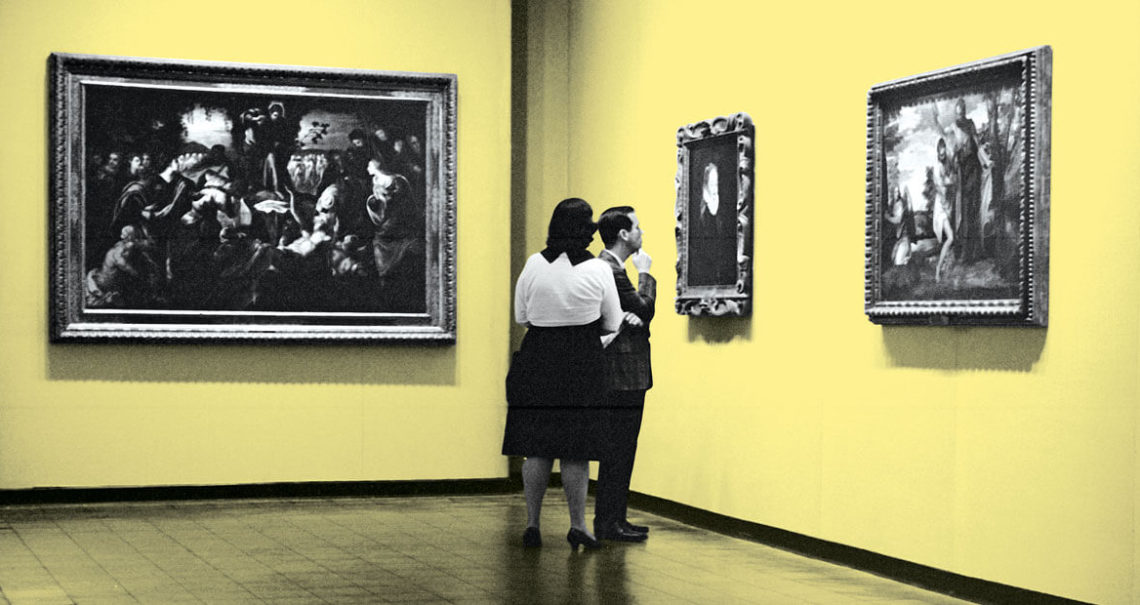 On the day after Christmas 1951, a self-made millionaire and art collector from New York, Carl W. Hamilton, knocks on the door of a stranger’s home in southern California. He bears two suitcases heavy with photographs of 200 paintings chosen for purchase by the North Carolina State Art Commission — five men appointed by Gov. W. Kerr Scott — as the core of a public collection for a state-owned museum in Raleigh.

The stranger is Wilhelm Reinhold Valentiner, a German-born American art historian and collector. He is the director-consultant of the Los Angeles County Museum of Art and soon to play the same role at the Getty Museum in Malibu. Valentiner is considered the preeminent art museum director of his generation — perhaps of the 20th century. Hamilton is seeking his expert opinion: Should the commission spend $1 million on the paintings? 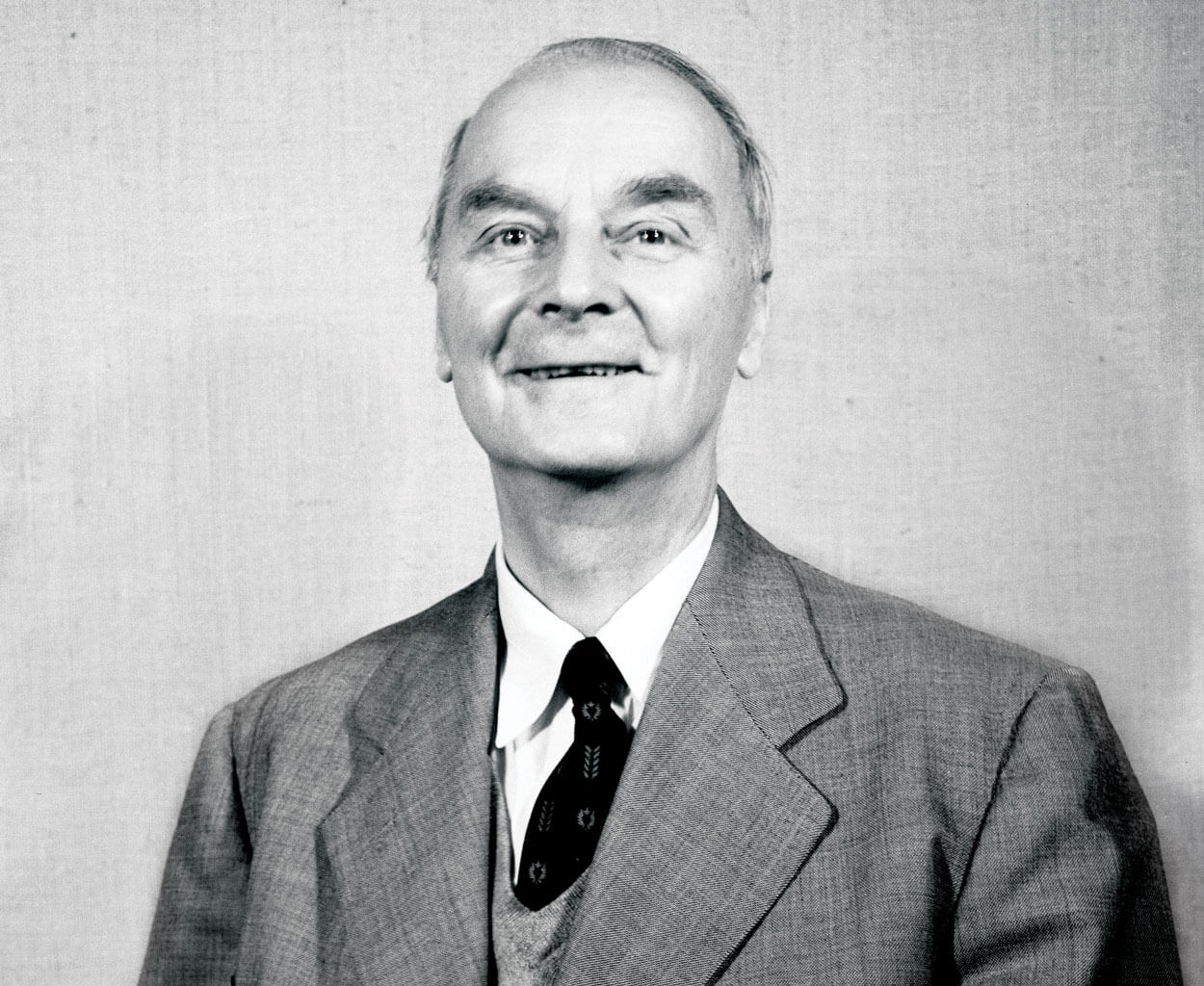 Valentiner is 71 years old, near the end of a long and distinguished career that began at the Metropolitan Museum of Art in New York. He knows North Carolina’s reputation as a tobacco producer. “But [Raleigh] certainly was not known as an art center,” he later writes. “I was amazed to learn that the State of N.C. had appropriated one million dollars, not for a museum building, as is usually the start of a museum in American cities, but for the acquisition of a collection of paintings of old masters.”

Valentiner approves of most of the paintings on the list, impressed that a group of four amateurs and one art historian has compiled such a strong catalog. Those 157 paintings by Dutch, Flemish, French, Italian, German, Spanish, British, and American artists become the germ of a permanent collection designed to cover the breadth of artistic achievement in the Western tradition. Valentiner faults the commission for not including works by modern artists — not even Impressionists — considered “heinous” by the state attorney general. The collection is conservative, noncontroversial, and heavily Euro-centric.

But Valentiner is right to marvel at the state appropriation: It is the first time any state has ever funded a public art collection. 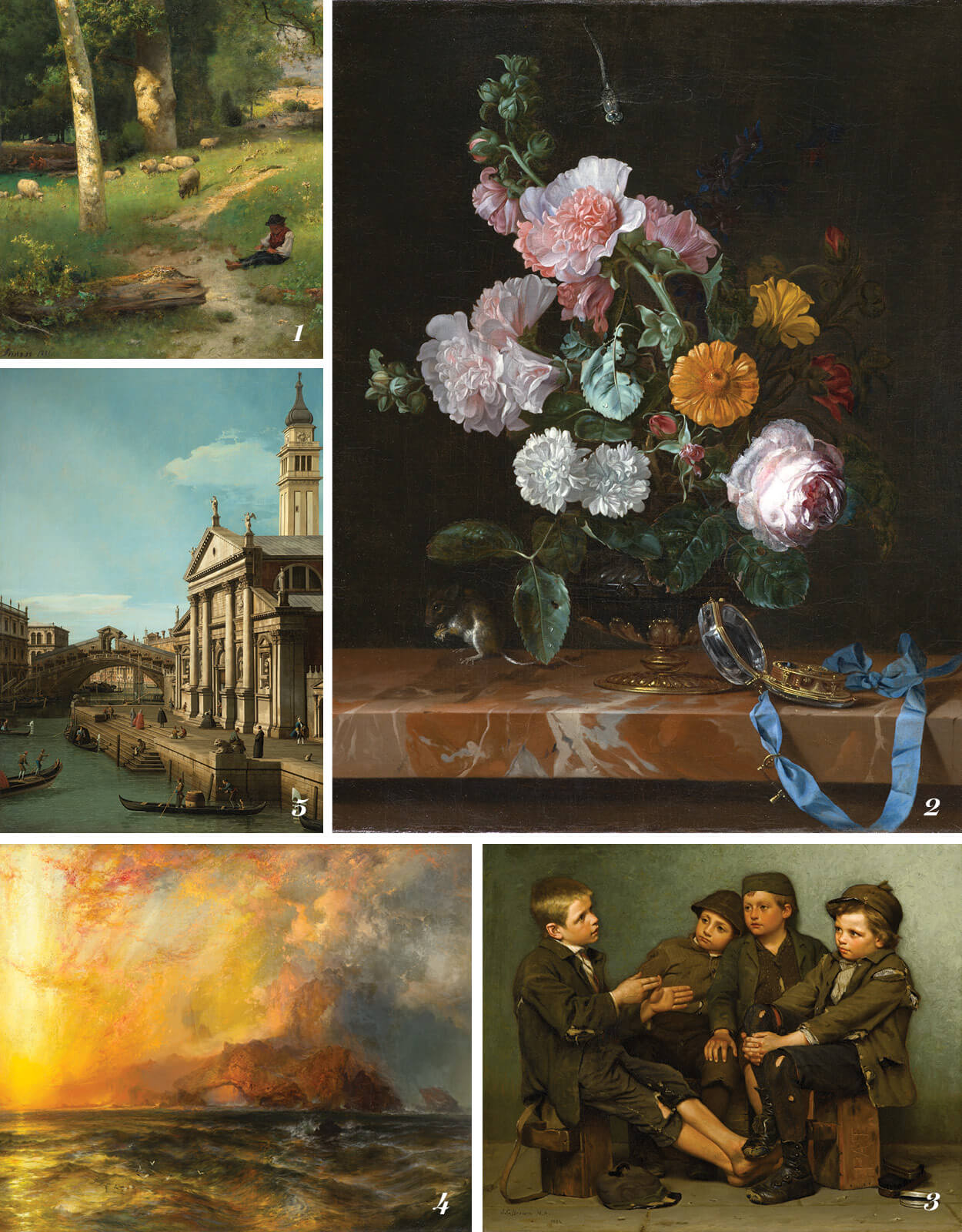 Visitors flocked to “the miracle on Morgan Street” to view works purchased with the state’s original $1 million appropriation, as well as 71 pieces gifted by the Kress Foundation, including paintings by Veronese and Tintoretto. painting by 1. Under the Greenwood (1881) by George Inness; 2. Vanitas Flower Still Life (circa 1656-1657) by Willem van Aelst; 3. A Tough Story (1886) by John George Brown; 4. “Fiercely the red sun descending/Burned his way along the heavens” (1875-1876) by Thomas Moran; 5. Capricco: The Rialto Bridge and the Church of S. Giorgio Maggiore (circa 1750) by Canaletto (Giovanni Antonio Canal)

The idea for a state art museum dates at least to 1924, when the Fine Arts Society formed with the goal of making inspiring art accessible to all citizens. Three years later, incorporated as the North Carolina State Art Society under its first president, John F. Blair, the group began staging art programs and small, temporary exhibits in spaces provided under charter with the state government.

Through a magazine article, the Art Society attracted the interest of an elderly, wealthy businessman from Cabarrus County, then living in New York: Robert Fulenwider Phifer. Keen to find a home for his art collection, Phifer wrote to his friend Blair, who arranged an exhibition at the 1927 State Fair. The next year, Phifer passed away, bequeathing 75 paintings of varying worth to the Art Society. In his final weeks, he wrote, “I feel now that any pictures I may leave the Art Society will be properly shown …”

Moreover, the terms of his will named the Art Society as a potential beneficiary of an estate trust worth more than $1 million. Eventually, the entire trust, along with significant interest, does revert to the Art Society — creating a permanent endowment for the purchase of art works.

It is the first time any state has ever funded a public art collection.

In 1943, pursuing an energetic progressive agenda even in the middle of war, Gov. J. Melville Broughton established the Citizens Committee for a State Art Gallery, appointing as its head Robert Lee Humber, a hard-charging international lawyer and art connoisseur from Greenville. Humber took on the challenge and proved adept at the politics of fund-raising, telling legislators that he’d secured a $1 million pledge from an anonymous donor — and calling on them to match it.

On April 4, 1947 — with one day left in the legislative session — State Representative John Kerr Jr. of Warren County championed the appropriations bill, declaring, “Mr. Speaker, I know that I am facing a hostile audience, but man cannot live by bread alone.” He urged his colleagues to do “the far-sighted, statesmanlike thing without being afraid.” The bill passed the House by three votes before passing in the Senate.

Humber’s pledge was a verbal agreement with Samuel H. Kress, the five-and-dime magnate who’d used his fortune to acquire one of the world’s most important collections of Italian Renaissance artwork. But by the time the bill passed, Kress was too ill to manage his own affairs. With no record of the promise, the Kress Foundation — which was planning to distribute its vast collection to 18 museums across the U.S. — proposed an alternative, offering Raleigh a million dollars’ worth of exquisite art. 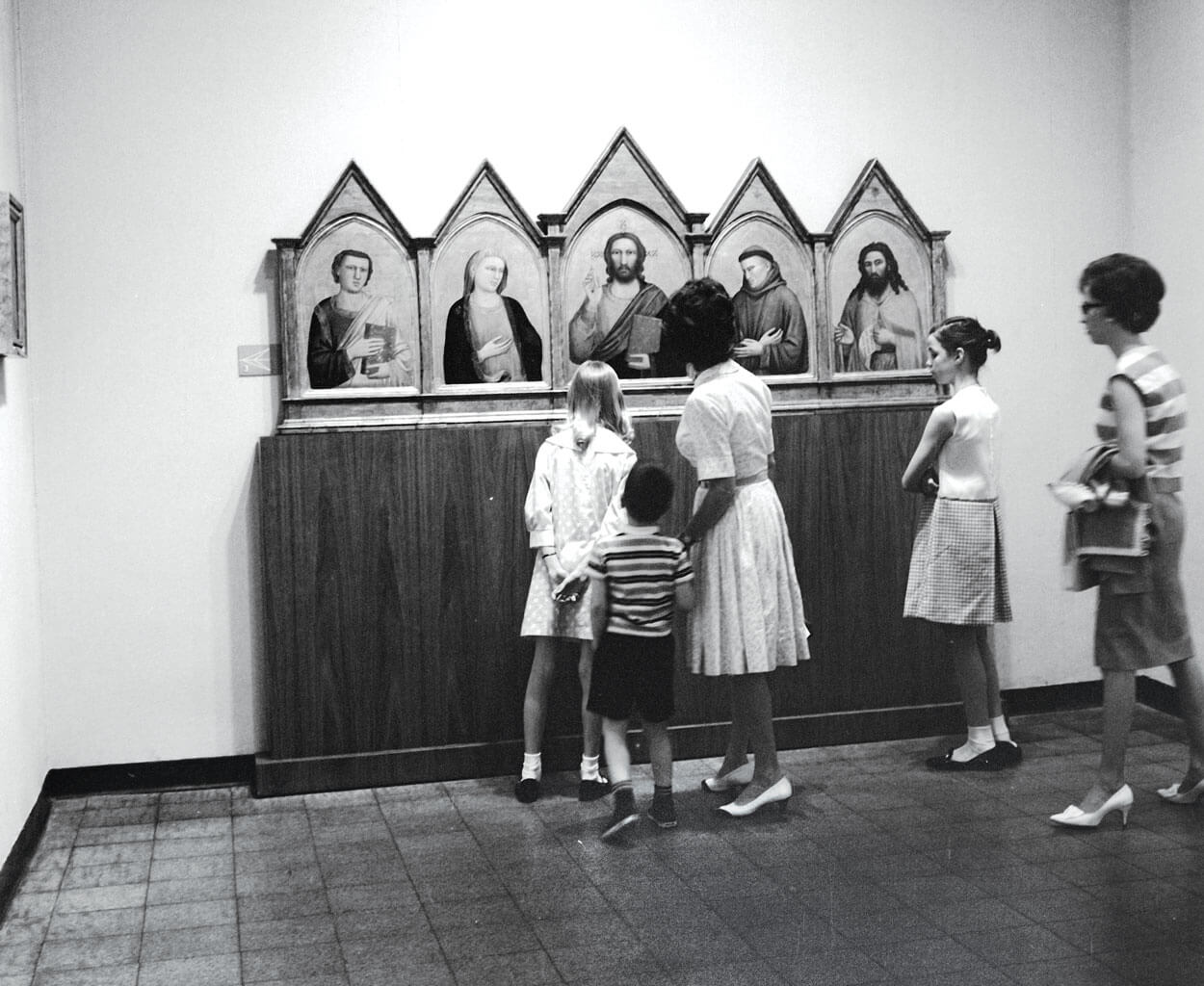 NCMA’s early collection was curated to highlight artistic achievements in the Western tradition, including the Peruzzi Altarpiece by Giotto. photograph by State Archives of North Carolina

The state money buys such works as The Armorer’s Shop (circa 1640-1645), a rare composite painting. Flemish painter David Teniers the Younger is credited with the smoky gray ambience of the workshop, where bent figures in red shirts labor over dark blades, while a small section in the foreground, attributed to Jan Brueghel the Younger, features a pile of armor rendered in such fine detail that it seems to have a steely weight and texture.

With funds from the Phifer bequest, the commissioners purchase St. Jerome in His Study (circa 1440), attributed to the German master Stefan Lochner. The saint, who famously translated the Bible from Hebrew and Greek into Latin, is shown robed in red, leaning away from his reading desk.

The Kress Foundation furnishes 71 paintings and sculptures, including such works as Young Man with a Sword (circa 1633-1645) by the Circle of Rembrandt van Rijn. The gem of the collection — the Peruzzi Altarpiece (circa 1310-1315) of Giotto di Bondone and his assistants — comes from the Kress Foundation in 1960 by way of the National Gallery, which reputedly declines to accept the piece in its entirety. The altarpiece is composed of five steepled panels painted with tempera and gold leaf, depicting Christ in the middle; his mother, Mary, to his right; and three other saints, St. John the Evangelist, St. John the Baptist, and St. Francis of Assisi. Its importance lies partly in the work itself — a rare complete Giotto altarpiece that survives, and the only one outside of Europe. But it is also the work of Giotto, an artist whose fame extended well beyond his lifetime and whose work influenced the Renaissance painters who came after him. He revolutionized the flat Byzantine style of the day, presenting his figures in a more human, three-dimensional style, with recognizable facial expressions and signature gestures.

In 1955, the commission persuades Valentiner to come out of retirement to head the North Carolina Museum of Art, and he proves to be an inspired — and inspiring — choice. Though in poor health, partially deaf, divorced, and living alone, he immediately and energetically sets a professional tone for the museum.

With little social life, the museum is Valentiner’s whole focus, the thing that keeps him going. “You ask me whether I am happy in Raleigh?” he writes to his former assistant at the Getty, Mary Adams. “The working conditions are better than in Los Angeles, but there is little fun in this provincial town where no restaurant or even drugstore is open after nine and the only bookstore with a few decent books is the Museum …”

Valentiner himself writes the catalog for the NCMA collection, founds a journal of art history, publishes prolifically in other scholarly journals, and remains tireless in his devotion to the art. He seems energized by the prospect of building a world-class gallery from scratch, in a most unlikely place. He writes, “It is one of the pleasures of life to work oneself up again and again.”

He curates loan exhibitions, enlarging the experience of the museum and attracting patrons for repeat visits to see the newest works. Almost immediately, he begins cultivating out-of-state donors and seeking new additions to the permanent collections during his summer trips to Europe, where he acquires Egyptian, Greek, and Roman art, along with textiles and sculptures.

Hamilton and Humber remain active as board members and advisers, and Valentiner often finds them vexing, at times exasperating. Both are strong, opinionated personalities. Humber, in particular, is used to being in charge. At one point, Valentiner writes a letter threatening to resign, but he neither mails it nor throws it away.

The North Carolina Museum of Art finds a temporary home in the musty old Highway Division building on Morgan Street. The plain columns inside are sheathed in black marble, the drab walls are hung with tapestries, and the entrance has a limestone classical portal added to it. Gov. Luther Hodges cuts the ribbon on opening day, April 6, 1956, and, as imperfect as the physical museum is, the public loves it. For the city of Raleigh, NCMA is a point of civic pride. For others, it is a declaration that art matters, and that an appreciation of beauty makes better citizens. Generations of schoolchildren grow up gazing at the old masters, dreaming of making their own art. Newspapers call it “the miracle on Morgan Street.”

Whatever his differences with Humber and Hamilton, Valentiner recognizes their achievement. He writes in his unpublished memoirs, “This is the story of the creation of the Raleigh state museum, which turned out to be a popular success. It is mostly due to the initial work of the two personalities, Hamilton and Humber. The extraordinary part is that they together produced a fine museum with an excellent collection though they knew very little about art.” He adds, enigmatically, that “other personal motivations played a much greater part in their work than love of art.”

At last, the unflagging work of art lovers, businesspeople, politicians, and volunteers over the course of decades, channeled and focused by the premier museum director of his day, has achieved a seemingly impossible dream: The great art of the world now has a lasting home in North Carolina.

The author also wishes to acknowledge the following people and sources for their contribution to this story:

North Carolina Museum of Art. Catalogue of Paintings Including Three Sets of Tapestries, 1956.

Websites
“History of the Museum”: ncartmuseum.org/about/history.