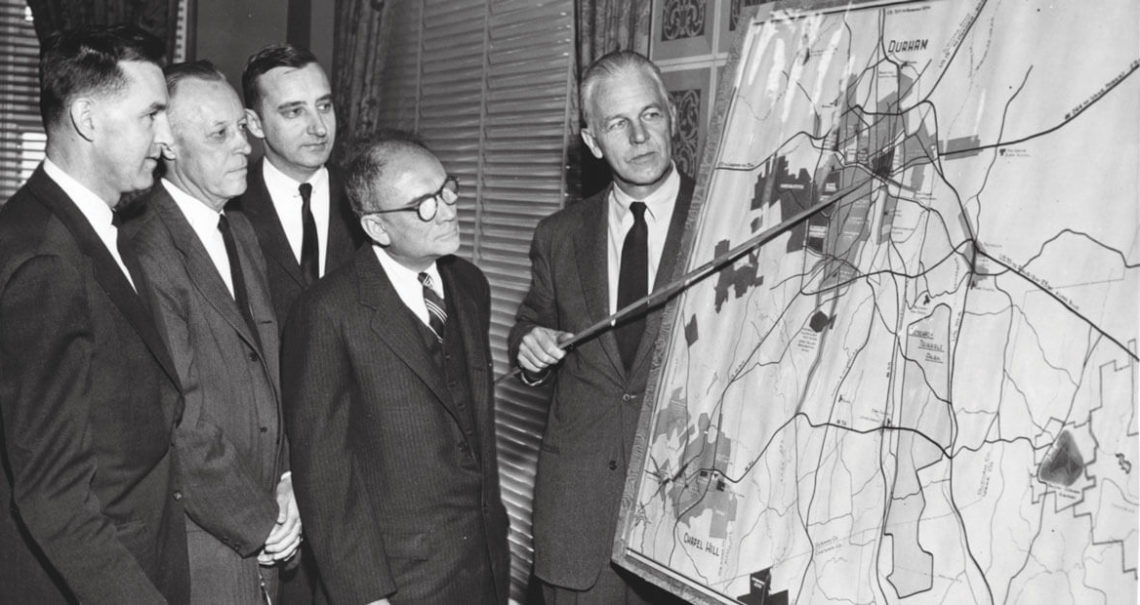 It is the gift of some remarkable people to be able to see a thing in its entirety where nothing yet exists. And sometimes, a great enterprise comes together when several such people hold competing visions but manage to reconcile them into a single viable reality.

Such enterprises may not be as glamorous or exciting as rescuing a priceless mountain from developers or launching a pioneering airline. They require many hours of committee meetings, patient research, reasoned arguments, and persuasion — bringing together people with allied interests, changing the minds of naysayers, working quietly for years without fanfare to accomplish something extraordinary that following generations will take for granted. Such is the origin of Research Triangle Park.

Dr. Howard Washington Odum, a sociologist and founder of the UNC Institute for Research in Social Science, initially proposes founding a research institute in the Piedmont, a nexus of cooperation among three universities — North Carolina State, Duke, and UNC Chapel Hill — to explore issues related to the American South. His idea languishes in the conservative hierarchy of the universities. UNC System President Gordon Gray attempts to reform the governance of the consolidated university, and Odum takes a leading role, convening a series of All-University Conferences to discuss the mission of UNC. But he dies in 1954 with his vision unfulfilled.

The problem is bigger than just getting the universities to cooperate. Somehow, an essential link is missing between higher education and real-world prospects for graduates in the state’s stagnating economy. Too many of North Carolina’s best-educated citizens have been leaving for better opportunities in more progressive places. The state’s Department of Commerce dramatizes this plight in a 1954 film depicting resigned parents sending their grown child off on a train. The voice-over intones, “Every year, many of our best-educated young people leave to find a living elsewhere. Of all our state’s resources, these young people are the most valuable, and we’re still losing them by the thousands.”

In the early 1950s, businessman Romeo Guest relocates his industrial contracting firm to Greensboro. He begins energetic efforts to lure companies to North Carolina and the Southeast, where he hopes to build their factories. He is not very successful, but he conceives of a new angle, capitalizing on the presence of the three universities, to create what he calls “a golden triangle of research.” Unlike Odum, he does not envision an institute of pure research, but rather a pragmatic engine for promoting business and economic growth — a cluster of enterprises taking advantage of the expertise concentrated in the universities to conduct targeted research to develop new technologies.

Guest writes, “We had three major universities all giving doctorate degrees, all doing research, all well financed, and all within a very short distance of each other. In fact, they appeared to me to sort of run together and be one [great] intellectual complex … In other words, we had the brains — all we needed was the money and a spark to set us off.”

“Of all our state’s resources, these young people are the most valuable, and we’re still losing them by the thousands.”

He coins the magic words: Research Triangle. The concept now comes alive in the imaginations of the leaders who can make it happen. And with the country deep in the Cold War with the Soviet Union, Guest understands that some of that necessary capital can be gotten directly from the U.S. Government, which is heavily funding scientific research.

Research Triangle Park’s special draw is embedded in its very name — the geographic triangle of open land formed by the three robust research universities, each located in a metropolitan area. The word “triangle” also signifies that three important entities need to work together to make it a reality: business, the universities, and the state.

In 1951, Guest floats the idea of Research Triangle Park to Brandon Hodges, the state treasurer, and Walter Harper, a member of the state board of conservation and development. Both are receptive. But, though the term has a nice ring to it, no one can figure out how to connect the universities and private enterprise. Their structures, goals, and cultures are so different — even contradictory.

The many moving parts confound the for-profit venture: Universities shy about partnering with private enterprise. Lawmakers wary of favoring certain companies over others. Even the reluctance of some of those companies to relocate their operations in an untried arrangement lacking roads and other essential infrastructure. 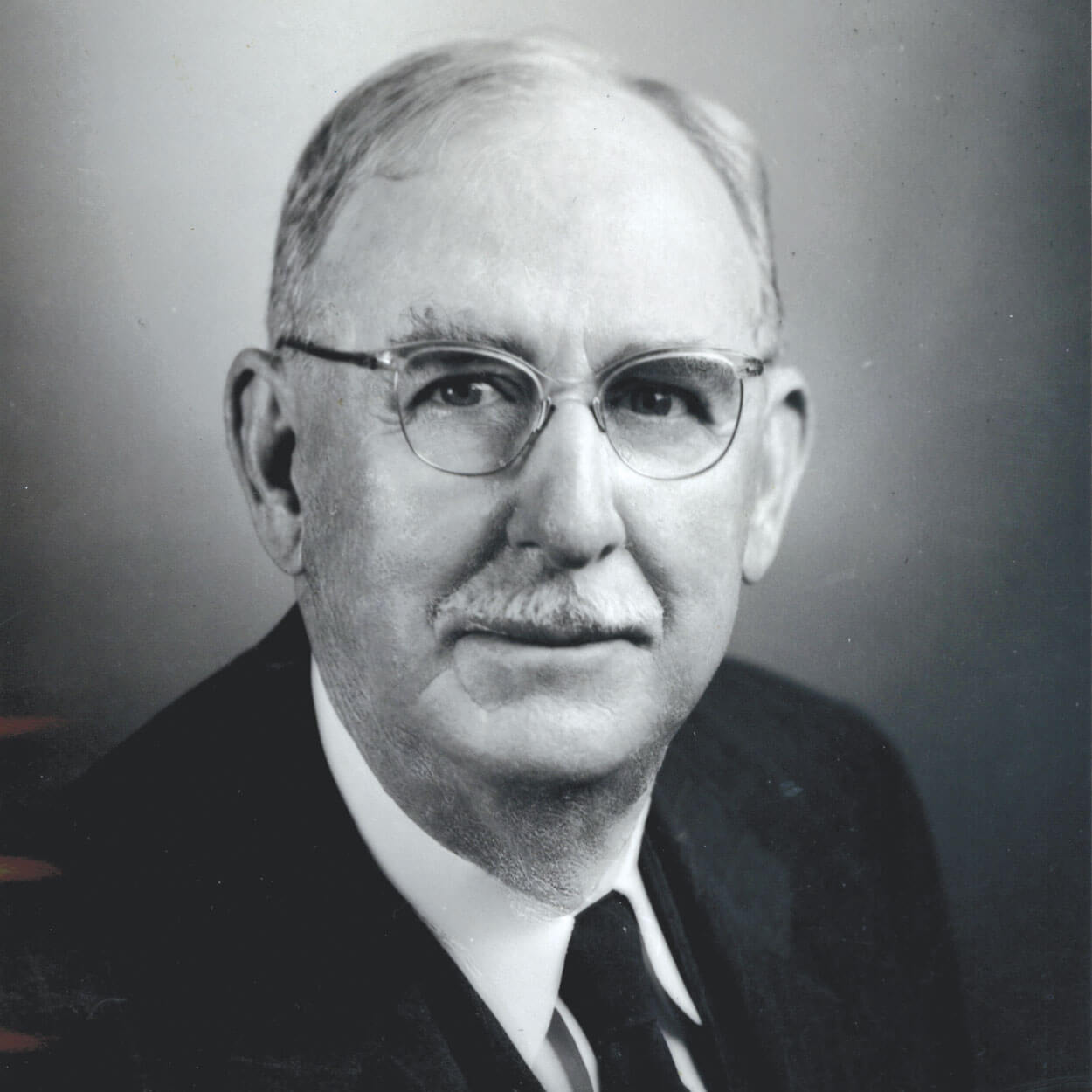 All three universities’ leaders share the same misgiving: They do not want to compromise their teaching mission. Guest, who has solicited support from business and political leaders, has not yet won the favor of the very universities featured on his own brochure, entitled “Conditioned for Research” — which offers the services of university researchers outright to companies who would relocate to the state.

The brochure’s promise elicits a backlash from some important players on campus. But Guest keeps meeting with those in a position to make the venture possible: Robert M. Hanes, president of Wachovia Bank and Trust Company; his successor, Chairman Archie K. Davis; and Gov. Luther Hodges, the son of a mill worker in Spray (now Eden), who himself worked for a textile mill as a boy.

Hodges is energetically pro-business, and he becomes the critical supporter, for commitment from the state will reassure chary investors that RTP is a long-term enterprise. Hodges invites delegations from all three universities to a luncheon at the Governor’s Mansion in February 1955, signaling his intention to make the realization of RTP one of the top goals of his administration. In a speech announcing that commitment, he explains that “two-thirds of these young people trained in science at these three institutions are forced to leave North Carolina, and indeed the entire South, to find suitable employment.”

North Carolina is an unlikely place to attract educated professionals and their families. The state has generally been hostile to unions, and low-wage industrial jobs and labor-intensive farming drive its economy. It has resisted integration of public schools. And it is not a center of innovation.

From the start, Davis, the new head of Wachovia, doesn’t think the for-profit enterprise makes sense, and he tells Hodges so: “If this indeed was designed for public service, then it would be much easier to raise money from corporations and institutions … who were interested in serving the State of North Carolina, by making a contribution.”

As early as July 1955, Professor Paul Gross, vice president of education at Duke, proposes the idea for an institute that bridges the gap between basic university research and industrial research. When William Friday succeeds Gray as president of the UNC system, he is committed to the notion of a research institute — but only if it conforms to his vision of serving the public good. There is a vigorous debate about what the park’s mission should be: Hodges wants an economic engine; Guest and other businessmen want a land-development enterprise. Friday insists that any research institute must be controlled by the universities, separate from the business-oriented Research Triangle Park Foundation.

Ultimately, Friday’s plan is accepted — RTP will be a hybrid of private enterprise and public interest, with an independent research institute allied with all three universities and a business park controlled by the foundation. Everyone agrees on one thing: Whatever RTP is at its inception, it must grow, become both larger and more significant, over time. It is a bet on the future. 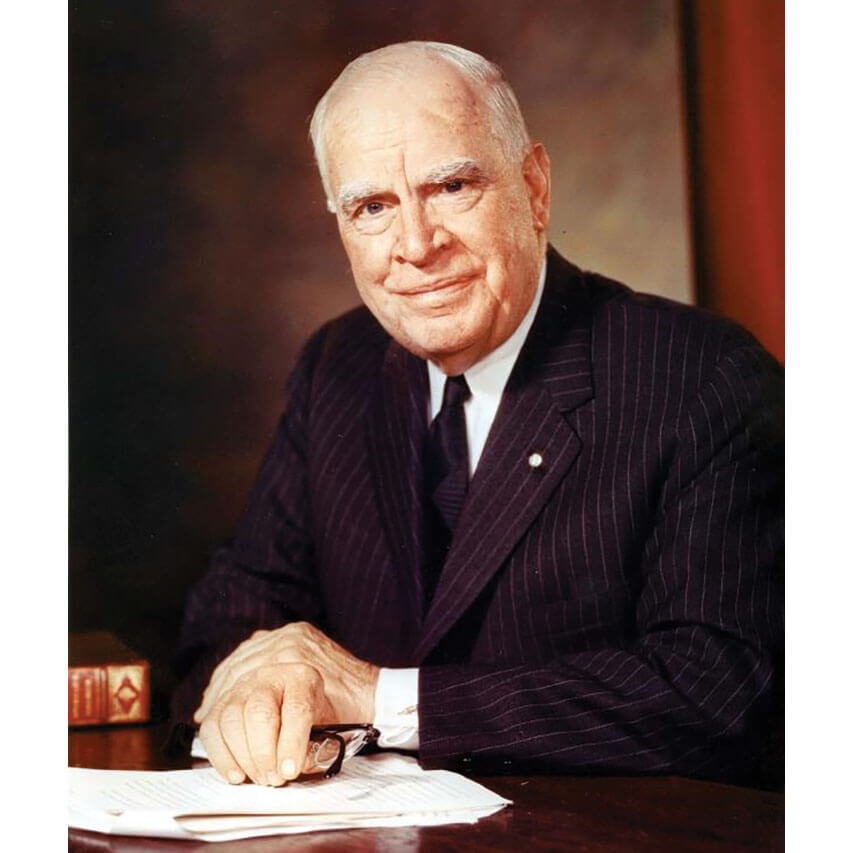 Support from Luther Hodges, who served as governor of North Carolina from 1954 to 1961, was integral to putting plans for Research Triangle Park into motion. Hodges called RTP “the heart and the hope of North Carolina’s industrial future.” photograph by The North Carolina Museum of History

In 1956, the Research Triangle Committee is formed, incorporated as a nonprofit and headed by Odum’s protégé, Professor George Simpson. Thus begins the shift from a for-profit venture to a nonprofit collaboration.

Now that he can solicit donations toward the greater public good, Davis displays a genius for fund-raising, coming up with almost $1.5 million to get the project started.

Simpson articulates their mission: “The Research Triangle Committee, while it is a private nonprofit corporation, is essentially a public agency. This is true for several reasons. First, its essential control must invariably be located in the desires and feelings of the institutions. Second, its operations are supported by contributions from the public at large, notably people from Chapel Hill, Durham, and Raleigh. Third, our objective is the service of all the state of North Carolina.”

The nonprofit status turns out to be the key that unlocks a lot of doors. Businesspeople now see less risk of losing investment, as government can help fund vital missing infrastructure, and some donations are tax-deductible. Hodges and other government officials see it as a firewall against self-dealing and corruption, one to which they can contribute state funds without seeming to favor one corporation over another. The universities don’t cross into commercial territory that might compromise their teaching mission or present conflicts of interest for faculty researchers. And just as significant, the nonprofit status signals that the park is meant to benefit the common good of the whole state — accountable to its citizens, not shareholders — just as Davis envisioned.

Subcommittees chaired by professors help cement the private-public collaboration. Later, handpicked faculty members serve as recruiters, contacting companies and pitching the park as an incubator of new ideas and technologies.

RTP’s boosters need something concrete to sell, so they buy the first tracts of land, 4,000 acres between Raleigh and Durham, convenient to both the Southern Railway and two highways, NC 54 and U.S. 70A. The land is mostly farms and pine forest, just $175 per acre.

One of the faculty recruiters is William Little, a chemistry professor at UNC. He and others convince The Chemstrand Corporation — an Alabama synthetic fiber manufacturer with plans to build a research facility in New Jersey — to locate it instead at the park. Chemstrand becomes the first anchor, acquiring 100 acres for laboratories totaling almost 200,000 square feet and employing 400 scientists, technicians, and administrators. Its modern brick-and-glass laboratory wing, fronting on a broad green lawn, would look right at home on any university campus.

Research Triangle Park is very much a park — low-rise laboratory campuses among acres of pines, connected by a network of curving roads, in the gentle hills of the Piedmont. It is soon the largest research park in the country, 5,000 acres and growing, managed by the Research Triangle Foundation, a nonprofit with the mission of developing the park into a technological hub. RTP begins to redefine not just the Triangle metro area, but also the entire state as one that is no longer stuck in 19th-century industries.

Romeo Guest’s assistant, Phyllis Branch, later writes: “No doubt there were others besides Mr. Guest and Dr. Odum who thought the general proximity of three great universities might someday result in a great potential force, but I think the record is perfectly clear that it was Mr. Guest who not only named Research Triangle and who did the early thinking about how it might work [but also] found a group of people to give it life’s blood, and the spank which gave it birth.”

Odum and Guest saw different facets of the same grand vision — and others came to share that vision and shape it. After countless meetings, planning sessions, arguments, and hours of work, the three sides of the triangle have joined, a vision turned reality, mapped into North Carolina’s future.