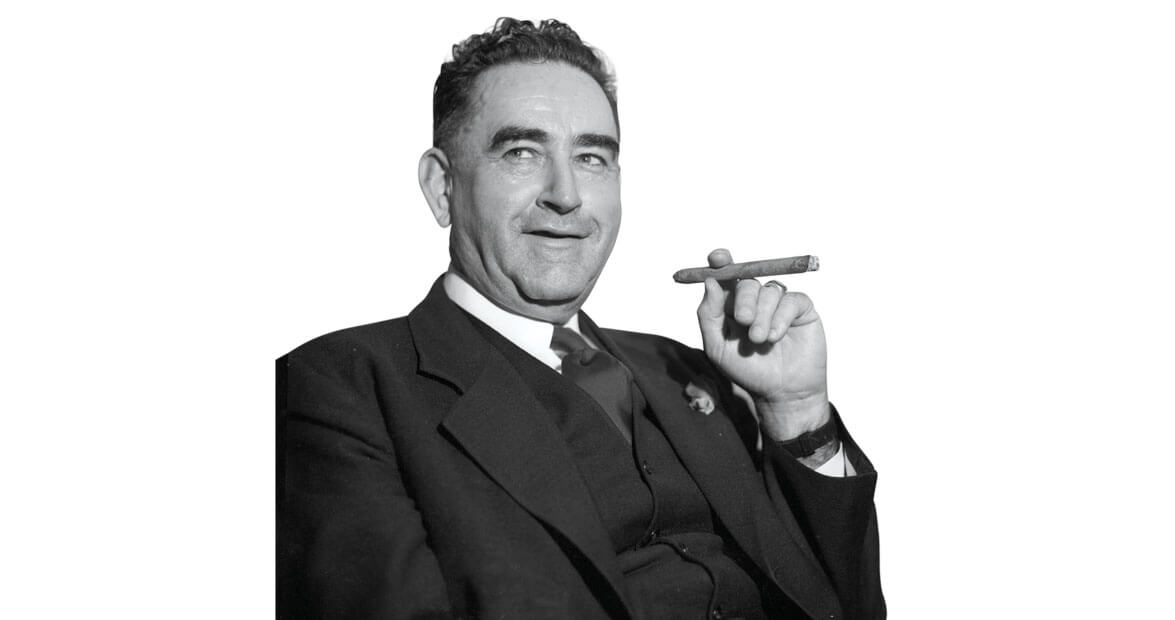 North Carolina enters the postwar decade in a roil of aggressive politics, pitting old-guard heavyweights against upstart progressives. The crisis of war is over, and with it the focus on the war effort at the expense of other programs. There’s a lot to be done — for businesses, schools, roads, and social needs — and robust arguments arise about what should be addressed first, at what cost, and how it should be paid for.

Out of the hurly-burly of politics emerges a dark horse, a leader of bold vision and plain speaking: a dairy farmer from Alamance County named William Kerr Scott. He goes by Kerr, pronounced “car,” fitting for a man who will become famous for building roads.

Scott is a farmer’s son, born on April 17, 1896 — before the turn of the 20th century, before the rise of automobiles and the invention of the first successful airplane, before the Great Depression and two world wars. He built his own home and dairy farm less than a mile from the farmstead where he was born, the sixth of 11 children, to Robert W. “Farmer Bob” and Elizabeth Hughes Scott. “Farmer Bob” was actually politically sophisticated: He served on the State Commission of Agriculture under seven governors, hosted Gov. Charles B. Aycock in his home on several occasions, and was a two-term state senator and five-term representative. 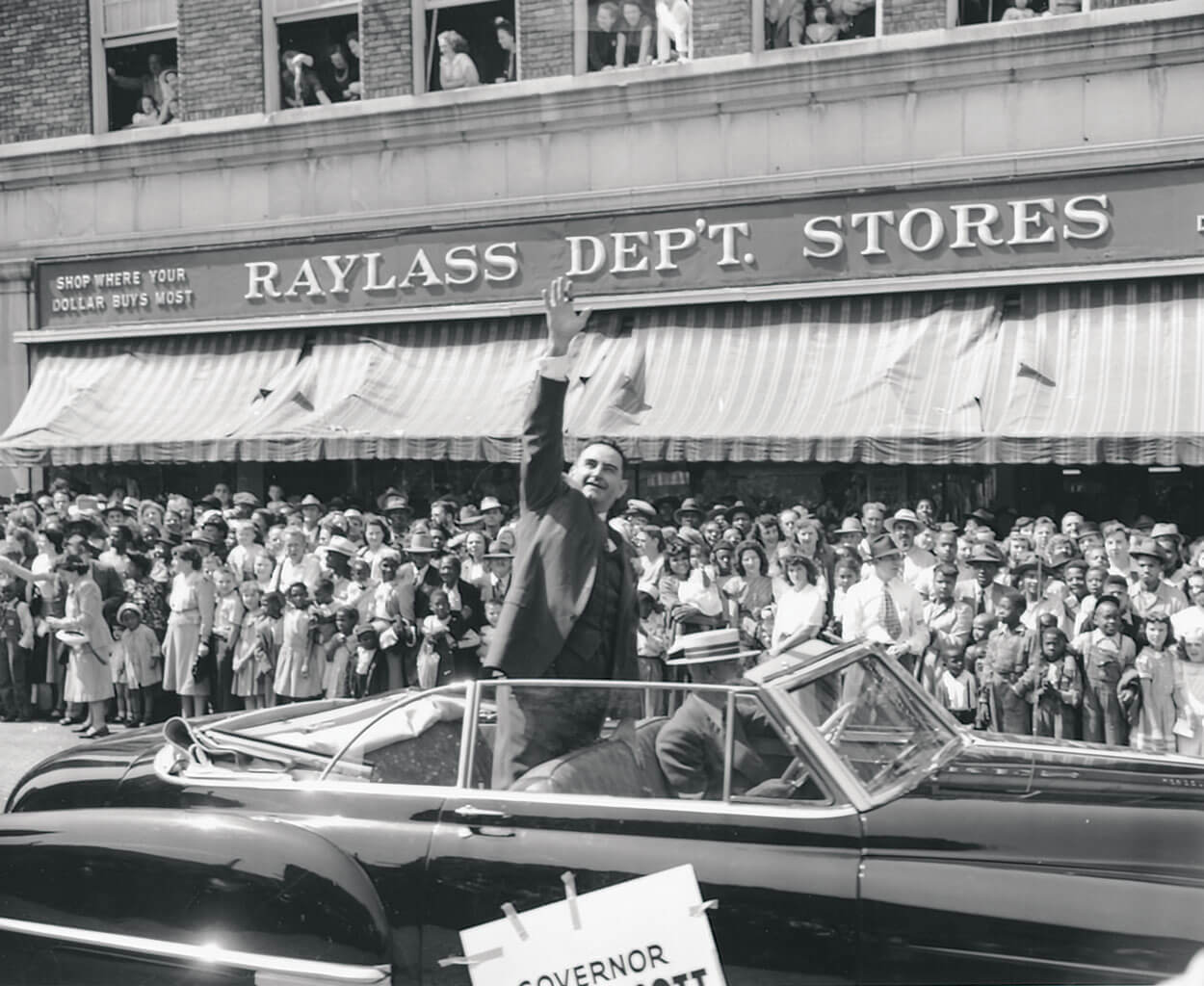 After winning the governorship with his “Go-Forward” campaign, Scott participated in the Forsyth County Centennial Celebration in May 1949 — a grand event that included a pageant and a parade that rolled down West Fourth Street in Winston-Salem. photograph by FORSYTH COUNTY PUBLIC LIBRARY PHOTOGRAPH COLLECTION; PIN IMAGE COURTESY OF THE NORTH CAROLINA MUSEUM OF HISTORY

His son has inherited his political savvy. Kerr Scott is a devoted Presbyterian, a lifelong student of the Bible, and also a pragmatist with vision, who can see not just an ideal future but also what is possible in the here and now. Politics is the art of the possible, and he is gifted with the ability to make more things possible. He is impatient with the ruling powers, which to him are unquestionably concentrated in the cities, favoring big business over the needs of the common people — rural people. In conversation, he is deeply attentive, but he speaks his mind — directly, even bluntly, though always with an old-fashioned courteousness.

He has a sturdy farmer’s build, curly dark hair often worn swept back from his high forehead, and thick eyebrows that give his smile a boyish, mischievous look. He is equally at home in a pin-striped three-piece suit or denim overalls and a straw hat.

As commissioner of agriculture for almost a dozen years, he has earned a legendary reputation for knowledge and competence.

In 1948, he sets his sights on the governorship. Among other politicians, he inspires either fierce loyalty or total enmity, rarely anything in between. But his real constituency is made up of ordinary people, on farms and in small towns. He becomes their champion. In an impassioned speech in Asheville, just three days before resigning as Commissioner of Agriculture and formally announcing his bid for governor, he advocates for significantly extending rural phone and electric service, improving schools, and undertaking a massive project to pave farm-to-market roads.

He calls his daring program “Go-Forward.” His critics warn that his grand spending program will bankrupt the state. His backers call him “The Squire.”

“‘The Squire of Haw River’ is still a good listener, a deep student of what he hears and reads; and then, when he makes up his mind what should be done and how it should be done, he goes out and does it,” writes Robert Redwine, his biographer, introducing a volume of his speeches and letters — many of them responses to the more than 300,000 letters sent to him by citizens.

In these days of one-party Democratic supremacy, the primary — not the general election — is decisive. Scott’s gubernatorial opponents are two: R. Mayne Albright, a liberal war veteran running as an anti-machine candidate, and Charles Johnson, the state treasurer, endorsed by the party’s establishment, including a majority of legislators.

Johnson edges out Scott in the largely three-way primary by fewer than 9,000 votes, but Scott campaigns on brilliantly, connecting with people around the state with his down-to-earth manner, relating folksy anecdotes tailored to local audiences that illustrate the problems of bad roads and poor schools. Scott attracts the backing of progressives such as Terry Sanford, a Fayetteville attorney and future governor. In the runoff, Scott picks up most of the Albright faction and wallops Johnson by almost 35,000 votes, carrying 65 counties — a clear and stunning mandate. He enjoys especially vigorous support in rural counties, and his most ardent supporters become known as “the branch head boys” — referring to those who live far up the creeks, or “branches,” and away from towns. In the general election, he carries 73 percent of the vote — nearly 112,000 more votes than Harry Truman, running at the top of the ticket, receives in North Carolina.

As governor, Scott is as good as his word, shaking up the status quo. He appoints the first woman to Superior Court, Susie Sharp, then goes on to appoint more women to boards and commissions than any previous governor. Though he has remained committed to segregation, he appoints the first black man ever to serve on the State Board of Education: Dr. Harold Leonard Trigg, former president of Elizabeth City State Teacher’s College and current president of St. Augustine’s College. To his critics, Scott responds, “Comprising almost one-third of the population of our state, and with 30 percent of the children attending our public schools being their children, the Negro race is entitled to and should have representation on the Board of Education.” Scott’s progressive ideas are vigorously opposed by a group of hard-core conservative legislators who caucus after-hours and call themselves the “Hold-the-Liners.”

He enjoys vigorous support in rural counties. His most ardent supporters are known as “the branch head boys.”

Limited by state law to a single term, Scott accomplishes an amazing record in just four years: 14,810 miles of roads and highways, which is more than was paved in all the decades before his inauguration; 8,000 new classrooms, 175 new gymnasiums, and 350 lunchrooms in public schools; an annual appropriation of $550,000 to fund a health program in public schools; and more than $300 million of capital improvements in state colleges and universities and hospitals serving patients afflicted with tuberculosis and mental impairment, as well as general community hospitals — 4,406 new beds in 77 hospitals serving 73 of the 100 counties, some of which have not previously had a hospital at all. Under Scott’s administration, the deepwater ports of Wilmington and Morehead City come online at a cost of $7.5 million. Remarkably, he accomplishes all of this raising only one tax: a penny per gallon of gas to fund roads. He leaves the state treasury with a surplus of $40 million — which gives him special pleasure, having been accused of attempting to bankrupt the state with overambitious plans. In the private sector, nearly 400 new industrial plants have been built, employing almost 40,000 workers. And in keeping with his promise to make life better for the “branch head” folks, they now enjoy more than 30,000 new telephone and more than 150,000 new electric connections. 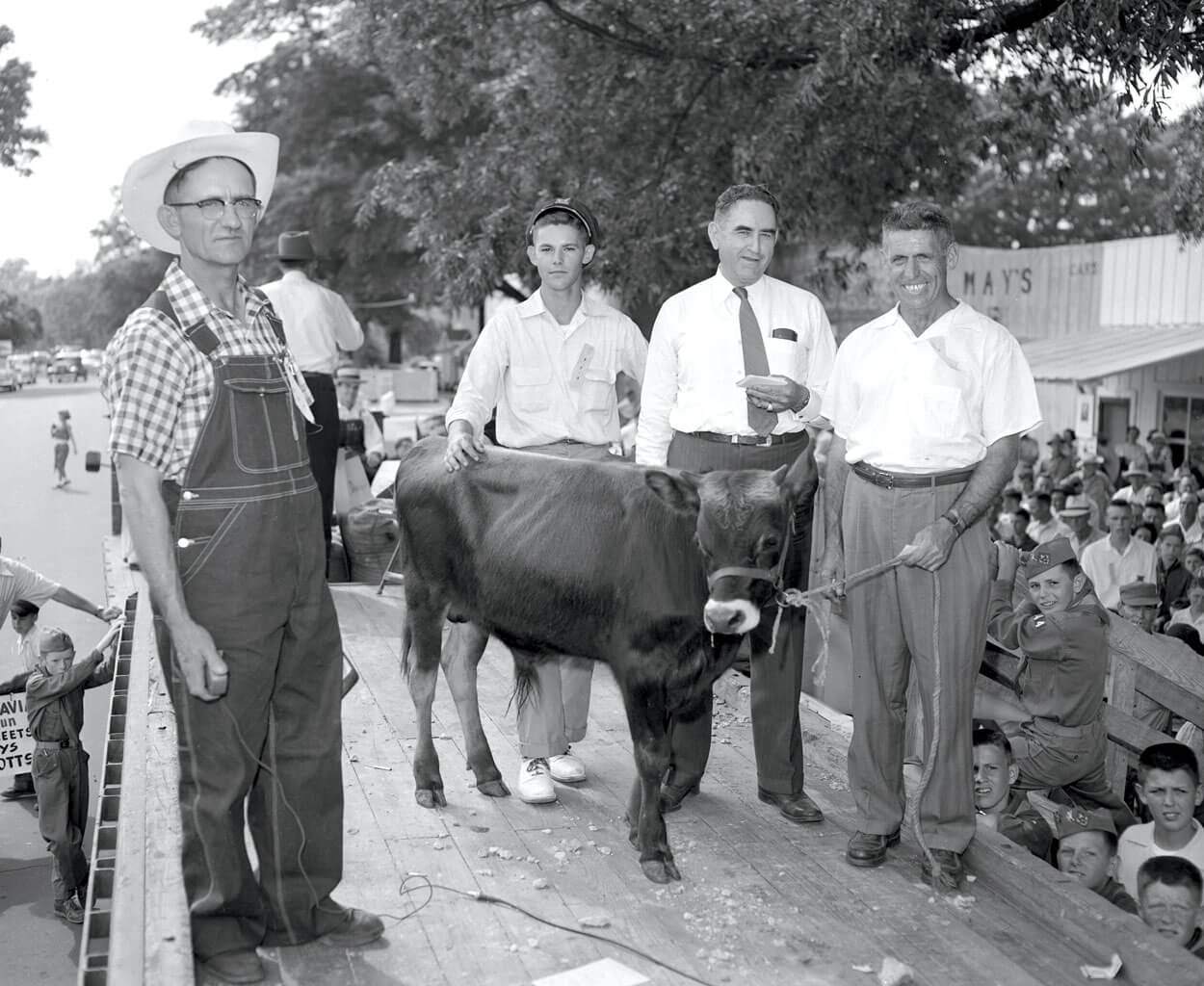 In 1954, while running for U.S. Senate, Scott (second from right) described walking 21 miles in six hours and promised a bull calf to anyone who could beat his time. Forty walkers participated in a footrace; 36 — including the winner, Paul “Hardrock” Simpson (right) — took home a calf. photograph by The News & Observer collection, courtesy of the state archives of north carolina

In his farewell radio address on December 30, 1952, Governor Scott reminds his audience: “The people are sovereign. When the shouting and tumult is over, their expressed verdict always prevails. Oftentimes the thinking of the people is far ahead of their political leaders. This has been demonstrated time and time again.” He goes on, citing the statistic that just one-third of North Carolinians live in cities; the other two-thirds constitute “an impoverished, mud-tax afflicted, rural population [that] makes poor customers for any trading center or metropolitan area.”

He continues, “I became a candidate for governor because of these two convictions — that rural North Carolina was a land of forgotten people, and that what is bad for two-thirds of the people is bad for all.” When he describes nearing “the end of the row that we have been plowing together for the past four years,” his voice falters and breaks before regaining vigor and volume. He concludes, “May the God of us all be with you and with North Carolina forever.”

In 1954, he successfully campaigns to unseat Alton Lennon and fill the unfinished term of Senator Willis Smith.

Meanwhile, William B. Umstead succeeds Scott as governor. Two days after his inauguration, Umstead suffers a heart attack and remains bedridden for more than four months. In October 1954, a severe cold turns into pneumonia, and on November 7, he dies of congestive heart failure. Lt. Gov. Luther H. Hodges serves out the remaining two years of Umstead’s term and wins election to a full term of his own.

In the U.S. Senate, Scott continues his progressive agenda on a larger scale. Championing a world food bank to ease the suffering of millions of starving people around the globe, he testifies, “Well-fed and well-clothed masses of people cling to their freedoms, fight for increased dignities for the individual, and never succumb to the false promises and siren songs of the Frankensteins who fashion the creeds of shadowy isms.”

At home for Easter vacation in 1958, Scott suffers a heart attack. He is taken to a hospital in Burlington, where his doctors expect him to recover. But he takes a sudden turn and dies on April 16, 1958, the day before his 62nd birthday. At his Senate memorial session, Senator Lyndon B. Johnson of Texas says, “Kerr Scott loved people. Kerr Scott’s love was not an abstract, academic love. He wanted to do things for them because he was one of them. And they responded in full measure to his devotion.”

In the wake of Scott’s unexpected death, the editors of The Carolina Times of Durham write, “This newspaper did not always agree with Kerr Scott. In fact there were times when we disagreed with him most vehemently and took him to task in these columns. But Kerr Scott was a big enough man with whom one might disagree without having to suffer subsequent reprisals at his hand. He was no yes, yes man and he didn’t like such around him … Only a strong man can have power in his hands and not use it to destroy those who are weak.”

Perhaps the most eloquent eulogy comes from the Winston-Salem Journal: “Kerr Scott is dead. And yet he lives. In every nook and corner of North Carolina stand monuments to his life and handiwork. Every rural school, nearly every farm home, has in some way felt the influence of this simple but blunt-speaking man whose life and character so clearly exemplified the official motto of this state: Esse Quam Videri — To be rather than to seem.”

The author also wishes to acknowledge the following people and sources for their contribution to this story: