A signature bridge can define a city, change its skyline, become a visual icon that embodies some core truth about its identity. The Brooklyn Bridge became the emblem of industrial beauty and aspiration in 19th-century New York City. The Golden Gate Bridge over San Francisco Bay became the archway of brave departure and triumphant return during World War II.

Such bridges connect vital places, and — whatever their practical purpose — they also are intrinsically metaphorical, a physical manifestation of the idea of connection to something larger.

By the mid-20th century, Wilmington badly needs such a modern bridge.

Built on a coastal peninsula and separated from the rest of the state to the west by the Cape Fear River and to the north by the Northeast Cape Fear, the Port City has always been something of an island. When North Carolina extended its interstate highways in the 1950s, they did not reach as far southeast as Wilmington.

From the 1700s, the city has depended on ferries to connect it to the agricultural hinterlands. Even during the Civil War, vital military supplies shipped into the port by blockade runners had to be ferried across the river before they could be entrained for armies in the field.

The downtown ferry — not publicly acquired until 1919 — docked at the foot of Market Street and carried passengers, wagons, and, later, automobiles across the Cape Fear to Eagles Island, where they crossed the marshy Brunswick River via another ferry until it was replaced by a bridge in 1890.

Since 1929, the city has been joined to Brunswick County and points west by a pair of double-leaf drawbridges — the first crossing the Northeast Branch to Point Peter, the second farther on, spanning the Northwest branch of the Cape Fear. Over the next 15 years, the $1.25 million cost of the “twin bridges” was recovered by charging tolls on more than two million vehicles: 5 cents for bicyclists and pedestrians, 25 cents for automobiles, and 75 cents for large trucks.

But the old bridges just can’t handle the increasing growth and the traffic that goes with it. As early as 1952, the city council expressed concern about the “serious dangers and congestion caused by heavy traffic, especially loaded gasoline tankers, through the residential and commercial sections of the city.” As many as 800 tankers a day, transiting to and from the southside tank farm, clog the two-lane northside drawbridge, leading to mile-long backups as four U.S. highways funnel into it, making Wilmington “the worst bottleneck on the Ocean Highway.”

A signature bridge can define a city, change its skyline, become a visual icon that embodies some core truth about its identity.

Two Wilmingtonians — Cyrus Hogue Jr., an attorney committed to public service, and Hugh Morton, owner of Grandfather Mountain — lead a campaign to convince lawmakers in Raleigh to build a modern span into their city. A consulting firm explores the options: a new bridge over either the Northeast Branch or the main artery of the Cape Fear farther south, or a tunnel under the river. At an estimated cost of $24.6 million, the tunnel is a nonstarter. The next most expensive option is a high-rise span, which Mayor O.O. Allsbrook, the city council, and the U.S. Army Corps of Engineers all prefer — no hindrance to navigation by ocean-going ships and no interruption of the vital traffic artery in and out of the city.

The plan is almost derailed when an article appears in the Raleigh News and Observer declaring, “The State Highway Commission is expected to announce shortly that it has come around to this plan and soon will file an application with the Army Corps of Engineers for a permit to cross Wilmington harbor with a new high span.”

The bridge is far from a done deal, and supporters fear that the premature announcement may galvanize opposition to its multimillion-dollar cost. Morton writes to Commission Chairman Merrill Evans, assuring him “positively that I am not the ‘authoritative source’ that knows any such thing. I wish I were.”

But Evans dismisses his concerns. “I was not at all disturbed about the Wilmington Bridge article in the News and Observer,” he writes on December 19, 1962. “As a matter of fact, it is quite possible the article helped our situation.” 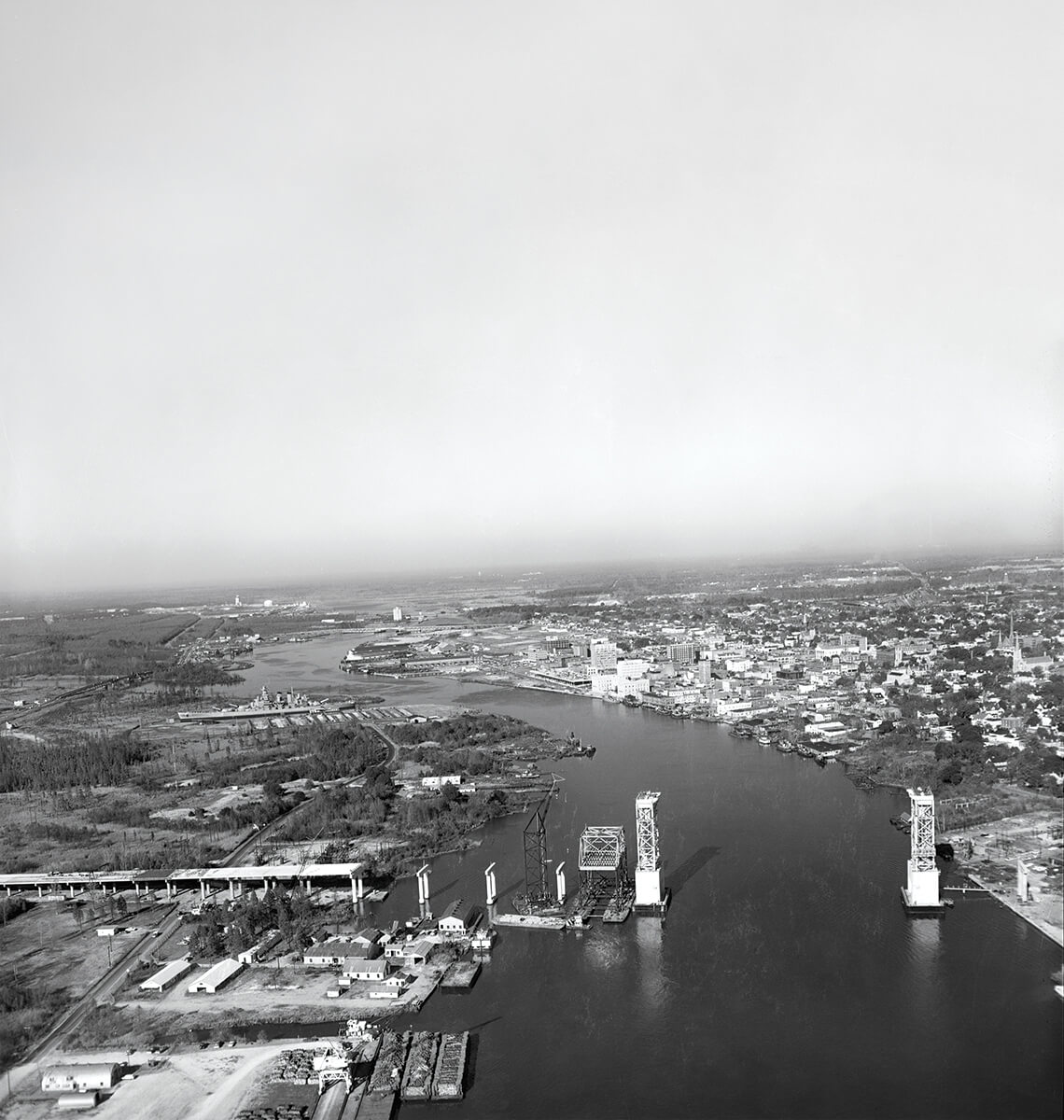 During construction of the Cape Fear Memorial Bridge in the late ’60s, photographer Hugh Morton — one of the bridge’s biggest boosters — captured the work in progress. photograph by Hugh Morton Photographs and Films, North Carolina Collection, UNC Chapel Hill Library

In a March 1963 memorandum, Hogue advises that the Wilmington group should temper its upcoming presentation to the State Highway Commission: “I don’t believe that we should be out on a limb that it is ‘high level’ or nothing … The bureau of Pub. Rds [sic] suggestion was that a medium level bridge be studied because the high cost may not be justified and the high level would tend to scatter traffic from down town.”

Even the medium-level drawbridge design has faced opposition — the U.S. Army Corps of Engineers initially vetoes the plan as a hazard to navigation.

At last, their efforts pay off: A high new bridge, more than 3,000 feet long, will deliver motorists to the south end of Third Street, the main thoroughfare to downtown.

The new bridge is of a striking design — a center-span vertical-lift bridge. To accommodate ships headed to the docks at the north end of the city, the 408-foot-long center span can be raised 135 feet while remaining level. It marks the western approach to the city with an instantly recognizable silhouette: Two 180-foot-high, cross-ribbed towers, set on broad concrete foundations sunk 50 feet into the riverbed and capped by steel, house the lifting apparatus, supporting a center span ribbed with an arcing skeleton.

As with so many engineering marvels, its memorable design arises not from an artistic conception but from a practical compromise, an outcome of canny political maneuvering: With a center span 65 feet above mean high water, the new bridge will not obstruct the harbor to the degree that a lower leaf-span bridge would, and the cost is significantly less than that of a true high-rise arching bridge, as is the disruption to downtown streets.

The dedication ceremony takes place on October 20, 1969. The $15 million price tag for the bridge and its approaches makes history of its own, according to the program, as the “Single largest money appropriation in the State of North Carolina … in one place.”

After more than three years of construction, the Cape Fear Memorial Bridge opens to traffic in 1969, providing a picturesque, modern gateway to the city. It is fitting that the decade closes with a grand act of connection. 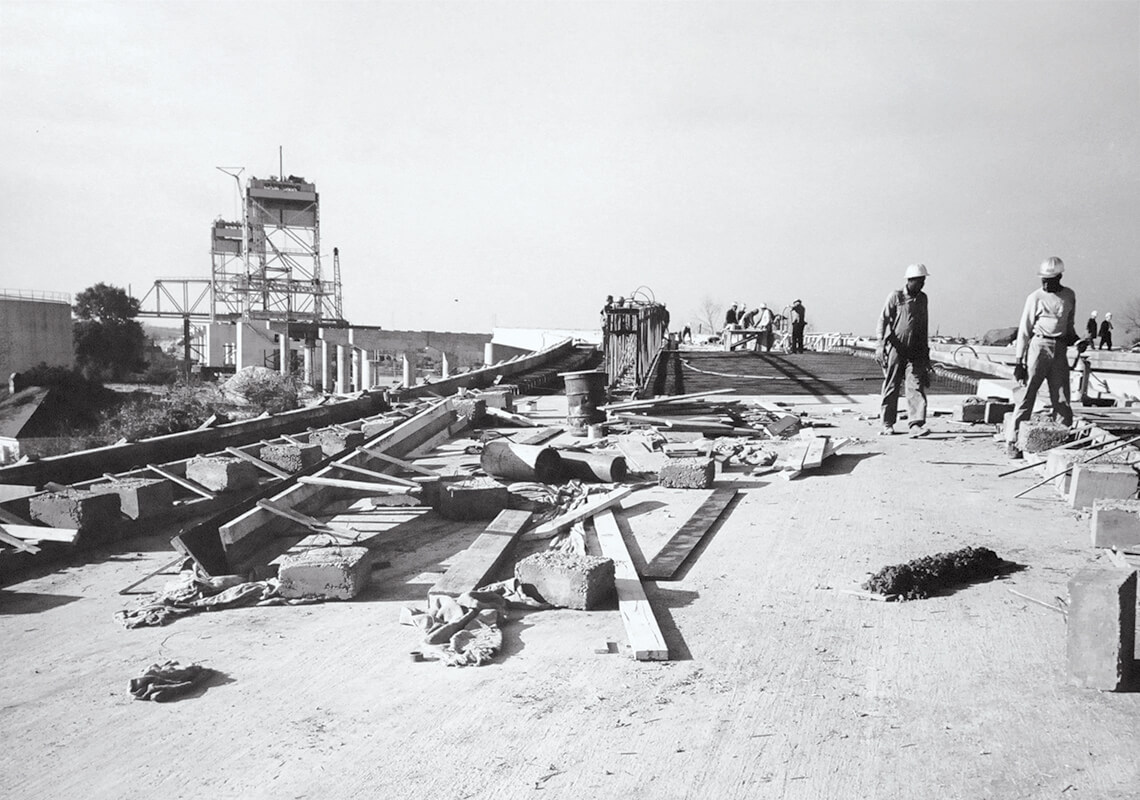 In December 1968, a little less than a year before the Cape Fear Memorial Bridge opened to traffic, workers constructed the causeway on the eastern side of the bridge. photograph by Wilmington StarNews

From the high vantage point of the bridge, travelers can get a perfect view of the newest addition to the western shoreline just upriver: the majestic USS North Carolina, the famed “Showboat” that served in every major campaign in the Pacific Theater during World War II, from Guadalcanal to Tokyo Bay. The battleship is two city blocks long and as tall as a 13-story building.

Hogue and other city boosters, along with many other North Carolinians, had raised more than $300,000 — a good bit of it from schoolkids who gave their nickels and dimes — to buy the old battlewagon at surplus and have it towed up the river in 1961. Moored in its permanent berth at Eagles Island, the retired Showboat has become a grand museum ship — like the new Cape Fear River span, a bridge between the hard-won struggles of the past and the hope of a more prosperous future.