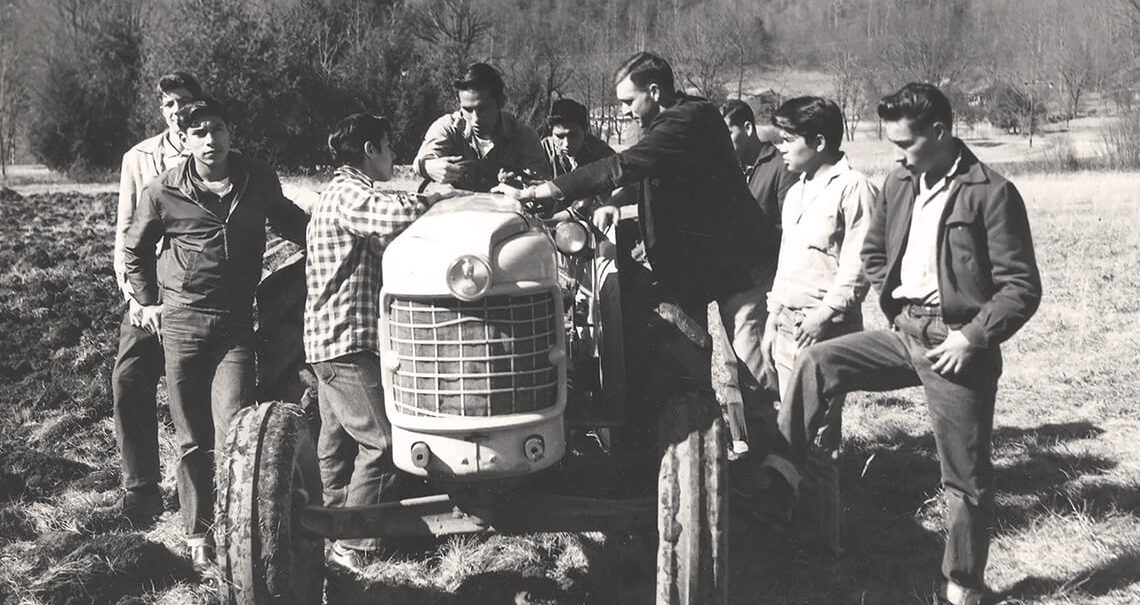 A farming accident in 1958 detours an aspiring officer from a military career into a new vocation — one that will help transform the community of the Eastern Band of Cherokee Indians. 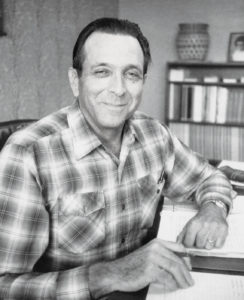 Raymond E. Kinsland. photograph by the Museum of the Cherokee Indian

In February, Raymond E. Kinsland graduates from North Carolina State University with a BS in Vocational Education and a state teaching certificate. Lean, dark-haired, and vigorous, he plans to enlist in the Army with his college buddies once they, too, graduate in May. Meantime, he returns to his father’s dairy farm in Cherokee to make himself useful. The Bureau of Indian Affairs superintendent learns that Kinsland is home and offers him a temporary job teaching at the Cherokee Central School, replacing an instructor whose father is very ill.

One of Kinsland’s three daughters, Dr. Debora Foerst, recalls what happens next: “The superintendent’s secretary came out to the dairy barn on my grandpa’s farm and had a portable typewriter and typed my dad’s application. That was on a Friday or a Saturday, and that Monday he started working at the school.” His specialty includes hands-on agriculture education.

“In May of that year, he was baling hay where the Cherokee Elementary School used to be, and there was some hay stuck in the hay baler,” Foerst says. “He reached in there to get it out, and it cut three of his fingers off. Of course he talks in great detail about picking them up and putting them in his pocket and going to the hospital and having his fingers sewn back up. But what’s more significant is that he talks about the fact that, had he not cut his fingers off, he would have joined the Army.”

In the early 1960s, the Eastern Band of Cherokees — like many tribes around the country — is struggling. An influx of tourist dollars since the end of the war has helped its economy somewhat, but poverty is widespread, and jobs are few. To find good wages, many young people leave the Qualla Boundary — the proper name of what many refer to as the Cherokee Reservation — located in the remote western mountains.

Now, the federal government presents an opportunity. One of many programs in President Lyndon B. Johnson’s War on Poverty is the Neighborhood Youth Corps, administered by the Office of Economic Opportunity.

With the jobs come training and mentoring, with a strong message to stay in school.

Since 1932, the Boys Farm Club has provided a chance for Cherokee boys to practice the skills they learn in their vocational classes. Kinsland helps reorganize the club with a more ambitious mission, and in May 1964, the tribe appoints him general manager of the newly incorporated Cherokee Boys Club. As a bona fide nonprofit, it applies for and receives a significant Neighborhood Youth Corps grant. The club finds employment for as many as 150 boys and girls in lunchrooms, offices, and building trades. They work part-time during the school year and full-time during the summer.

It’s a modest beginning, but it quickly expands, providing vital services across the Cherokee community. The club places student workers in the hospital, the Bureau of Indian Affairs Office (BIA), and the Cherokee Historical Association. And with the jobs come training and mentoring, with a strong message to stay in school, complete high school, and earn a diploma.

Skooter McCoy gets to know Kinsland well during his days playing football for Cherokee High School, where Kinsland is a loyal volunteer of the athletic program and never misses a game. He often gives the team an inspirational talk before a big game. “He understood from a very early age that there’s always young eyes upon you, and the things that he was able to teach, even us as players and future coaches, was being able to lead by example and how we carry ourselves in the community.”

McCoy goes on to become the head football coach at Cherokee High, emulating his mentor’s style of leadership by example. “He’s had an educational experience every day of his life with someone here.”

By late 1964, the club is operating 12 school buses purchased by the Tribal Council. Seasoned BIA drivers quit their secure jobs to work for the Boys Club, a dramatic show of confidence in the new Cherokee-owned venture. By 1966, the fleet expands to 20 buses. Kinsland personally conducts safety drills for all students each year, teaching them how to evacuate through the emergency door in the event of an accident. He is famous for knowing the name of nearly every student who comes through his course — and for his repertoire of funny stories. 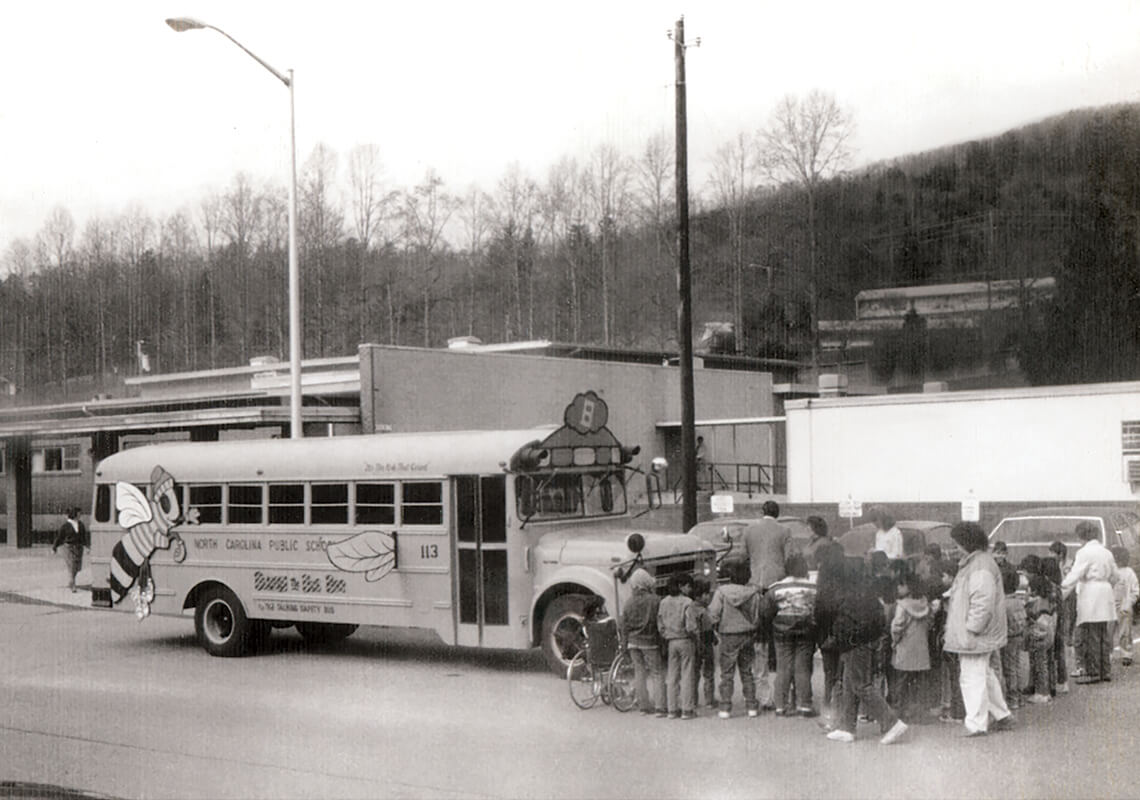 As a boy, Kinsland wanted to drive a school bus when he grew up — and he later did. He went on to drive Cherokee school buses, oversee the Boys Club’s bus and truck program, and instruct students on bus safety. photograph by the Museum of the Cherokee Indian

The club wins BIA contracts for paving roads and mowing rights-of-way and operates a fleet of trucks. It runs a garage and body shop. It expands into providing food service for the school, and parking and shuttle bus service for the outdoor drama Unto These Hills. The club’s impact is so profound that it is singled out for praise in the BIA commissioner’s report to President Johnson.

Don Jensen, superintendent of the Cherokee Indian Agency, reports, “There are more jobs here than there are qualified Indians to hold them.”

The Tribal Council appoints three representatives to recommend and oversee the new programs sponsored by the Office of Economic Opportunity and later creates Community Action Program boards to administer the funds. Again, the Boys Club provides leadership, engendering a sense of pride and purpose for the whole community — part of a nationwide movement by the National Indian Youth Council and other pan-tribal organizations to reclaim their heritage and gain control over their own affairs.

From the time she is a little girl, Tonya Carroll knows Kinsland as a man remarkable for his humility. He is a close friend of her grandfather’s and sings with him in a gospel quartet called The Sportsmen. They make a record and sell it to raise money to support the building of Children’s Home cottages, another program of the Boys Club. As a student, Carroll participates in school bus safety training under Kinsland — and goes on to become director of the leadership institute named for him. Carroll recalls him fondly. “He was a very humble man, and every time he saw you, he would speak to you, shake your hand, ask you how you are doing and if you needed anything, and if there was anything he could do for you, he would definitely do it.”

Kinsland is recognized with a string of honors: the Distinguished Service Award from the Eastern Band of Cherokee Indians, the Order of the Long Leaf Pine, even an honorary doctorate from Western Carolina University. In 1968, he is made an honorary member of the Eastern Band of Cherokee Indians with the name Di-sde-li-sgi-a-ni-wi-ni: “Helper of Young Men.”

“The integrity of that gesture to me may carry more weight than someone who was simply born into it through blood,” McCoy says in a video tribute to Kinsland. “His character and his leadership and the efforts and the sacrifices he’s made over the years made him so attractive to our tribe that we asked him to be a part of our family.”

The Boys Club becomes an exemplar of the gadugi, or “cooperative work group.”

How did an outsider manage to become such an integral part of the tribal community?

Kinsland seems to be always on duty, no matter the day or the hour. In addition to his responsibilities for the club, he announces the high school’s home football games, drives school buses to most away games, serves as a deacon and Sunday school teacher for the Acquoni Baptist Chapel, and serves as unofficial archivist for the Cherokee community.

His ethic embodies the seven Cherokee core values: group harmony, strong individual character, spirituality, sense of place, honoring the past, educating the children, and sense of humor. The Boys Club becomes an exemplar of the gadugi, or “cooperative work group” — helping those in need with no expectation of getting something in return.

His daughter Debora Foerst, who goes on to become principal of Cherokee High School, says, “Had he joined the Army, we don’t know how the Cherokee Boys Club would be here today.”

The Boys Club begins with just a dozen employees, less than $100,000 in funding, and big ambition. Under Ray Kinsland’s more than half a century of leadership, it eventually employs more than 500 people, using its budget of $40 million to offer services throughout the Qualla Boundary: offering seeds and fertilizer to farmers, helping with trash removal for the National Park Service, providing building supplies for housing, equipping a new ambulance for the rescue squad — and always more jobs.

But while the impacts on the economy and quality of life are significant, Kinsland’s real legacy is the cadre of men and women, several generations deep, who take on leadership roles in tribal government, the Indian Health Service, and the BIA, in the Cherokee community and beyond, carrying on in the spirit of harmony and service.