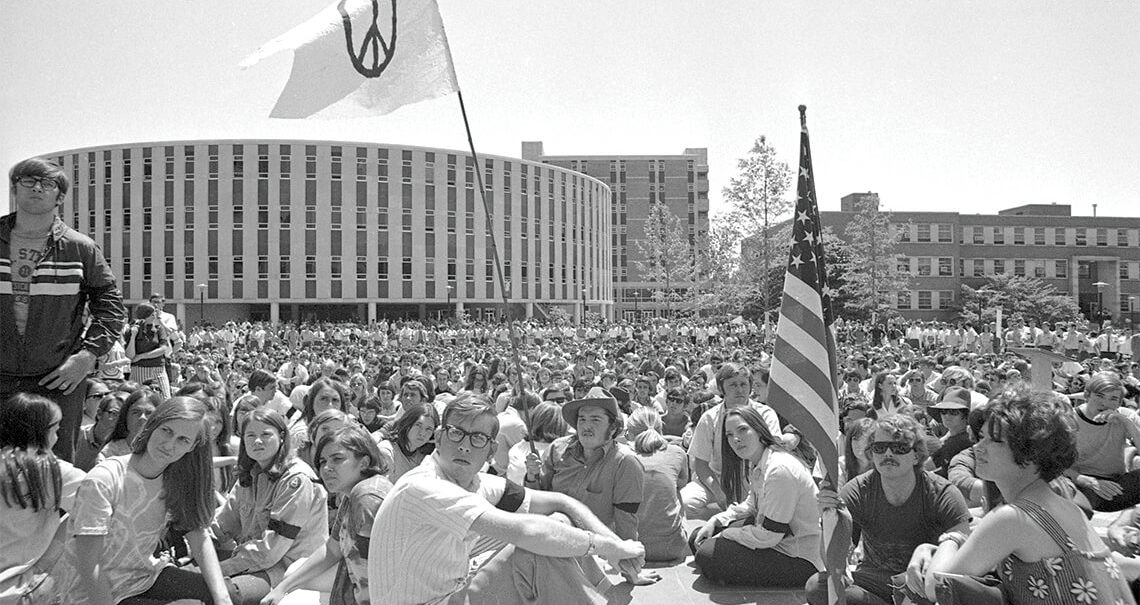 On a warm spring day in 1970, on the campus of Kent State University, about 100 members of the Ohio National Guard face down a noonday student protest against the Vietnam War and President Richard Nixon’s recent invasion of Cambodia. For reasons that will be litigated for years to come, 28 of them turn and fire on the protesters with live rounds — more than 60 shots in a period of just 13 seconds. Four students fall dead, and another nine are wounded.

Sterling began her college career as a singer on a music scholarship at UNC-Chapel Hill, but after a turbulent year has transferred to State. She lives off campus with her boyfriend, Gene Messick, a young instructor in the School of Design, and is now pursuing a degree in Industrial Cooperative Training (ICT). She’s one of only a small number of women on campus: “It was not uncommon [that] I was in classes where I was the only girl in the room surrounded by guys,” she says, “and it turned them to regular goofballs, I have to say.”

She has run on a platform to abolish what she considers exorbitant nonacademic fees. Her in-state tuition is $225 per year — but nonacademic fees of $196 nearly double the cost. “I had started writing letters to The Technician about the athletic fee, which really stirred a pot,” she later recalls.

Across the country, campuses are erupting in outrage. What will happen at NCSU?

Now, Sterling finds herself in a moment of national upheaval — across the country, campuses are erupting in outrage. What will happen at NCSU, a campus that has been politically quiet, affectionately known to students as “cow college”?

The serving president vacates immediately, offering no help to Sterling in making the transition. “I cannot begin to tell you how hard that was for me,” she remembers. “To cope, I just let go of all academic work, with the reluctant approval of my teachers, taking incompletes in all my subjects.” 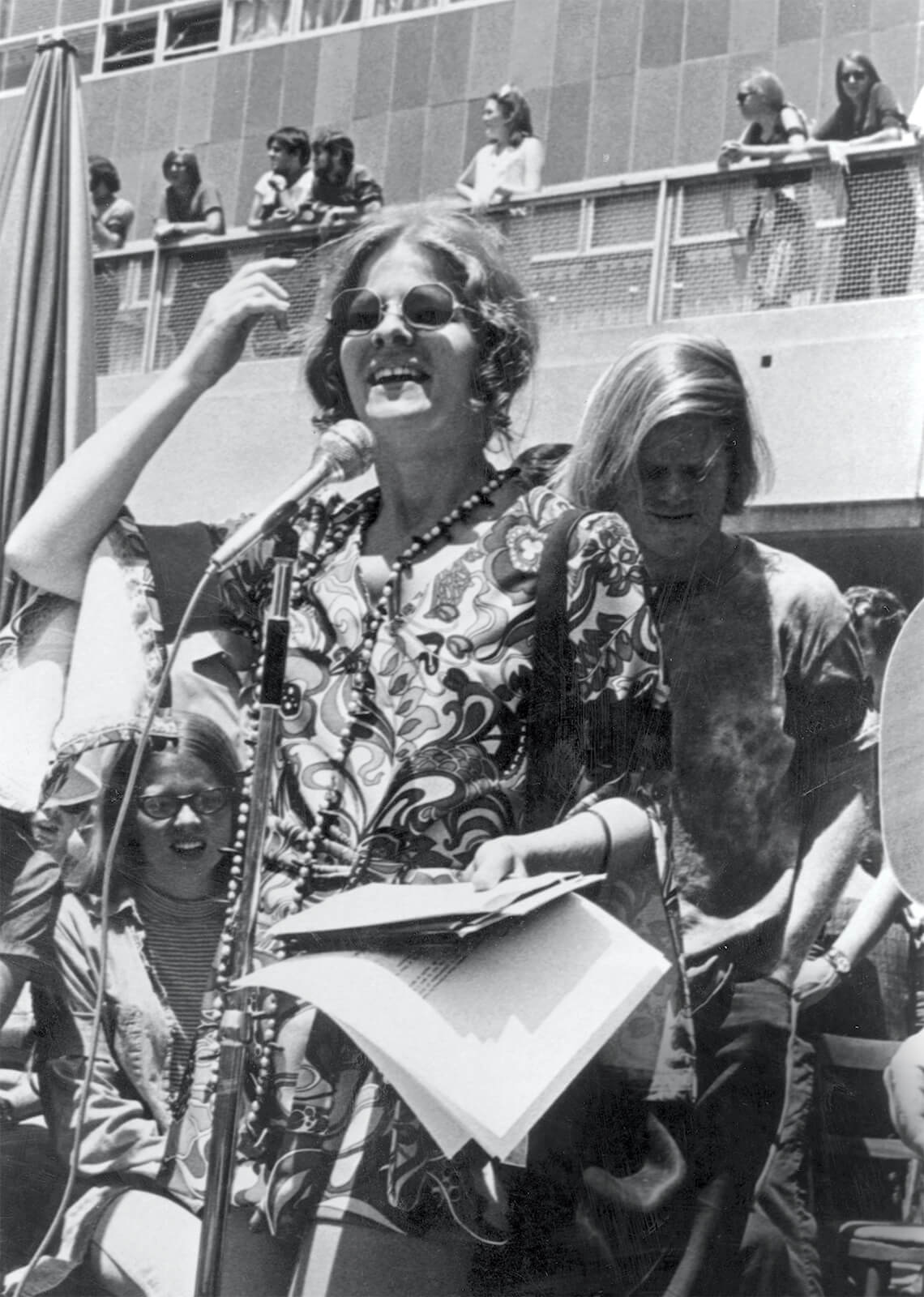 Just one day after her election, Sterling addresses a hastily convened convocation of almost 2,000 students, faculty, and staff in the Brickyard, a traditional campus gathering spot. “As Student Body President-Elect of North Carolina State University, I urge that all students on this campus carefully and morally consider and assess the events of the past week,” she says. “Whether you are angry or satisfied … let it be known, but in the most peaceful, most constructive way possible. Hate will never be a cure for hate; it will never win a war.”

Chancellor John T. Caldwell joins the other five UNC system chancellors and President William Friday in a statement to Senators Sam Ervin and B. Everett Jordan, urging an end to the war in Southeast Asia: “The error of Vietnam has poisoned the Nation and now has wounded it in one more grievous way. The War has wounded our universities.”

On May 8, Sterling leads some 6,000 peace marchers to the State Capitol, where she and student leaders from other universities present to Gov. Bob Scott a written denunciation of his telegram to Nixon in support of the incursion into Cambodia.

Tipped off that police are going to arrest Sterling for “cohabitation” — illegal under state law — she and Messick arrange a quick wedding near Asheboro. “Some people just really had demonized me, [saying] I was a student radical, and I wasn’t,” she says. “I was just mushy soft, you know. For the nights that I came off strong in the day, I’d go home and I’d [say] to myself, crying, ‘Was I too mean to the chancellor?’”

While campuses across the nation are shuttered by student strikes or violent protests, Sterling leads her constituents down a different path. She and a cohort of activists, including Gene Dees, a Vietnam veteran, organize a “Peace Retreat.” They plan to enlist faculty and administrators to use the end of the semester for a program of educational dialogue, seeking solutions and common ground.

The Peace Retreat “really wasn’t about closing down the university; it wasn’t like going on strike.”

“First, at my very core, I have always been a very peaceful person,” she writes. “Conflict has never been my path.” She discounts her own role, though clearly she is the one they are all following. “It was not just me. So many things that I got credit for were not just me, and they weren’t even my bright idea, necessarily,” she says. “They were really born out of collaboration with lots of others.”

The official chair is Dees, who writes in the movement’s policy statement, “The idea that the Peace Retreat is a ‘leftist’ movement is false. It’s [sic] chairman (myself ) is an ex-Green Beret sergeant that supports the President’s move into Cambodia and plans to return to the Army after graduation. Gentlemen, I am by no means LEFT!”

The Peace Retreat “really wasn’t about closing down the university; it wasn’t like going on strike … that wasn’t anybody’s interest here,” Sterling explains. “It was certainly felt by many people that the university needed to address what was going on in the nation and look at the issues, so how do we do that in a way that’s going to be most productive? A genuine examination and talking things out where people of all persuasions … could come together and do that.” 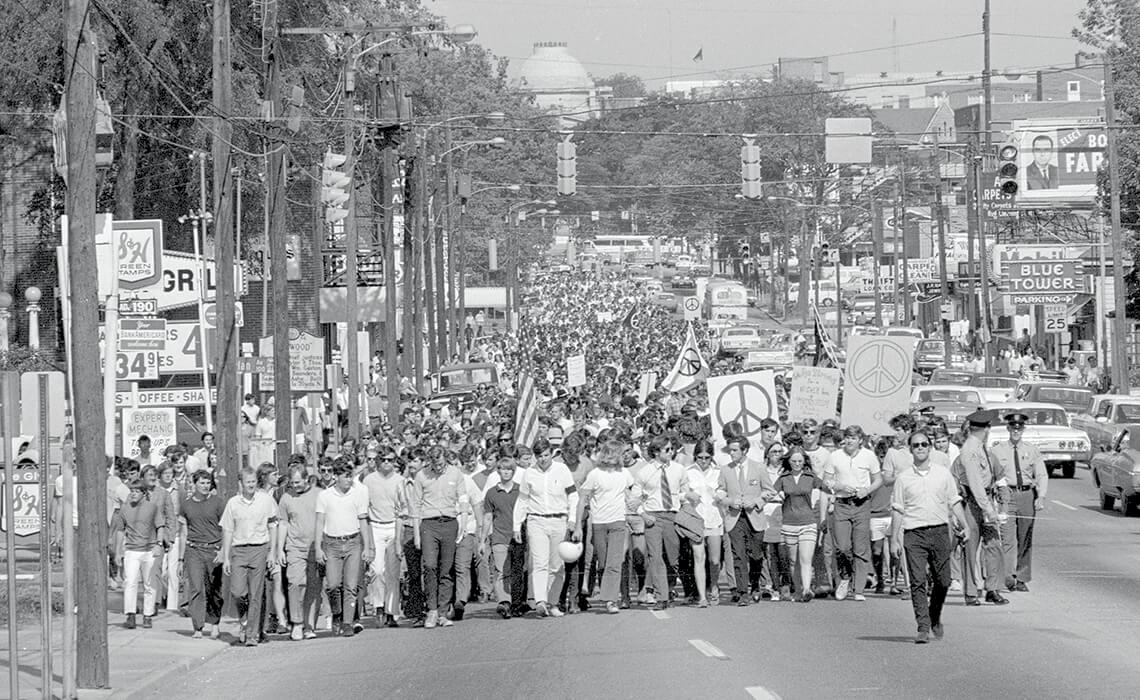 The Raleigh News & Observer described how students chanted “peace now” as they marched on the State Capitol, “20 abreast with arms linked, in a column that stretched down Hillsborough Street for five blocks.” photograph by The News & Observer collection, courtesy of the state archives of north carolina

She works closely with Chancellor Caldwell and recalls him with fondness: “Dr. Caldwell was a superb specimen of a very chivalrous Southern gentleman, gracious in presentation, steel-like in behavior. He basically tolerated me, treating me with a kindly indulgence, fatherly, never unkind in word or action.”

Caldwell presents options for grading so that students won’t be penalized for participating in Peace Retreat forums instead of attending regular exam sessions. Sterling explains that professors “could say, ‘Well, before you leave, you’ve got to give me a paper, or you’ve got to come in my office and tell me what you have learned, that you’re not just spending this time playing Frisbee out on the Brickyard.’ ”

Five service groups handle the logistics of organizing the retreat, from labor to public relations, while 20 community action groups work on issues ranging from fund-raising and canvassing for peace to Black action, a blood drive, a free press, and opposition to the draft.

The May 13 seminars address the Vietnam War from perspectives including “Historical aspects of the U.S. entry into Southeast Asia” and “Ecology: Effects of the Indochinese War upon the terrain of Southeast Asia.” The following day features sessions on the moral, religious, and ethical effects of the war and the toll of the fighting on the Vietnamese people and Black Americans.

The Peace Retreat is a signature achievement, notable for its constructive nature and its complete lack of violence. “Any member of the State community could engage with any other consenting member to express strongly heart-felt positions,” Sterling writes.

Before her presidency expires in 1971, she gets a chance to address student fees — the issue she campaigned on. But the administration can be stubborn and resistant to change. “I often wondered if the personal cost to me had even mattered,” she later writes. “Did the events of Spring ’70 or the following 18 months of my service have any true, lasting value in the history of State?”

As a deeply principled leader, she has indeed achieved something of great value: The student voice has been heard, and the threat of violence has given way to passionate — but peaceful — debate.