In 1972, two young, energetic politicians from opposing parties shake up the political scene. James E. Holshouser Jr., the 38-yearold chairman of the state Republican Party, hails from Boone. He’s served four terms in the state House of Representatives and now sets his sights on the governorship. North Carolina has not elected a Republican governor in the 20th century, but Holshouser wins with 51 percent of the vote, the youngest governor in state history.

James B. Hunt Jr., the 35-year-old son of a farmer in Wilson County, aims for lieutenant governor — a post that, in North Carolina, carries significant legislative power. Hunt entered politics as a college student. “When Terry Sanford ran for governor,” he explains, “I was in graduate school. I had been student body president at NC State, and he asked me to go out and form ‘Students for Sanford’ on every college campus in North Carolina, and I did! And we helped elect him.”

Hunt, a Democrat, is also victorious, and Democrats retain control of the legislature, many voters obviously splitting their tickets. “People were electing folks they thought would be the best leaders from both parties,” Hunt explains.

Now, the work begins. At the time, North Carolina has one of the most powerful lieutenant governor’s offices in the country, Hunt says. “The lieutenant governor appointed committees, referred bills, [and] of course presided [over] — you sometimes called it ‘ran’ — the Senate.”

Holshouser’s election comes on the crest of a breaking wave. The battle for racial equality has roiled state politics since the Civil War. For the generation following the 1870 impeachment of Gov. William Woods Holden for his campaign against the Ku Klux Klan, white supremacist Democrats largely controlled North Carolina politics. After 1877, no Republican held the governorship until an increased turnout by Republicans, including many Black voters, gave the contentious 1896 election to Daniel Russell. 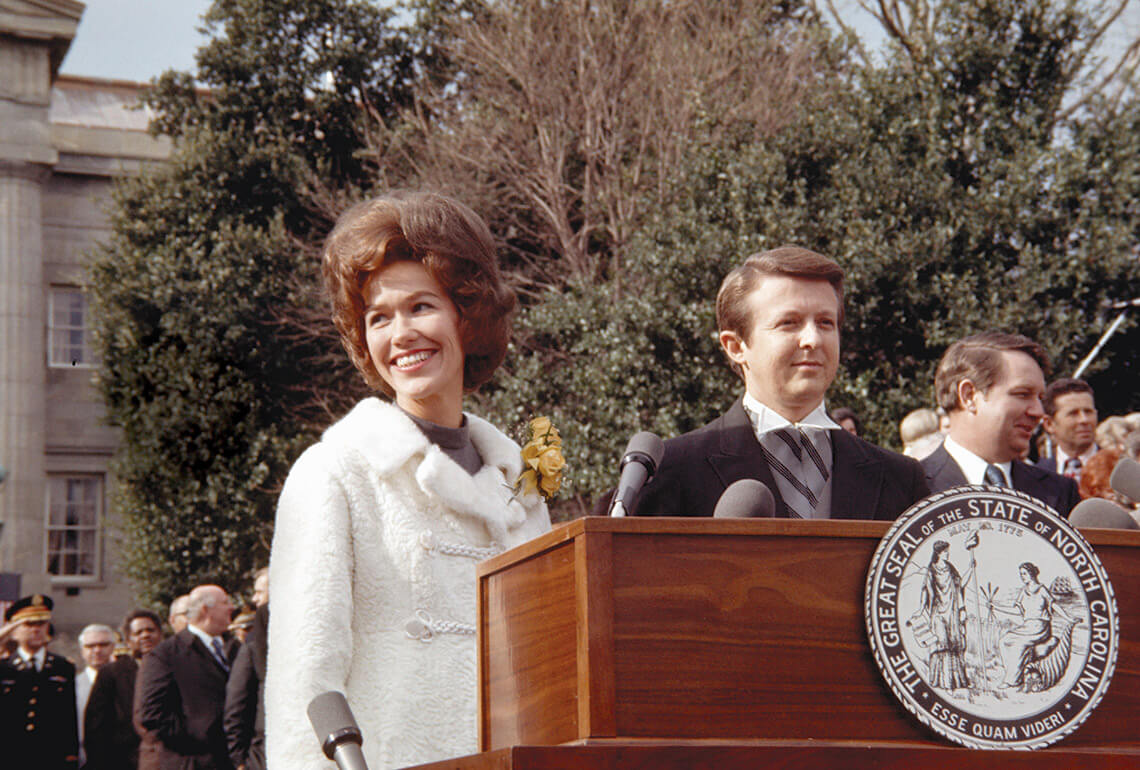 Jim Holshouser became governor in 1973. Standing alongside him at his inauguration was his wife, Patricia. photograph by The North Carolina Museum of History

But a new white supremacist backlash followed, culminating in an 1898 racial massacre and coup against the Fusionist government of Wilmington. Russell would be the last Republican governor until 1973. During the 1972 election, the sea change that has been building since Brown v. Board of Education comes to a head. The Democrats, increasingly the champions of civil rights under Presidents John F. Kennedy and Lyndon B. Johnson, have been causing disaffection among many white voters.

In 1968, Richard Nixon defeated Hubert Humphrey on a platform of law and order — a “Southern Strategy” designed to win over white voters in the states of the old Confederacy. In 1972, the defection of white voters from the Democratic Party is massive. Nixon sweeps the South, taking North Carolina by a margin of more than 40 points.

On his coattails, he carries into office a freshman senator known for his far-right conservative views, a former TV broadcaster and program director named Jesse A. Helms Jr.

Helms started honing his method of political attack as far back as 1958, as a Democratic city councilman in Raleigh. He complained to the city manager that the list of speakers at the Institute of Religion included avowed liberal Hubert Humphrey, labor organizer Victor Reuther, and Dr. Martin Luther King Jr. Helms wrote, “It would be most unfortunate if any untoward incident should occur during the visits.” The Raleigh News & Observer called him out on his veiled threat, accusing Helms of “pious incitement.”

“He was not just conservative, but he was also reactionary — he did not have a tolerant view toward African Americans,” Hunt says of Helms. “His effect was not to pull people together and get them to cooperate … but to exploit differences — especially between races, but on other issues, too.”

But Holshouser is a progressive with laudable goals. “For too long, many people in our state have been on the outside looking in,” he announces at his inauguration. “We’ve got to have more involvement of the Black community, of the Indians, of young people, and of women.” He appoints a special assistant for minority affairs and the first woman to serve in the Executive Cabinet.

His first executive order shows his conservative side, establishing the Governor’s Efficiency Study Commission, which he describes in a televised address at the end of his term. “We asked our business community in North Carolina to come in and take a hard look at state government and recommend changes that would save money without hurting programs,” he tells viewers. Of almost 700 committee recommendations, Holshouser’s administration adopts nearly 600.

We found common things between us, and we both carried our parties along, and the state benefited.”

Prior to the election, Hunt fully supported the Democratic ticket, including his friend and gubernatorial candidate Hargrove “Skipper” Bowles Jr. But afterward, Holshouser and Hunt form a productive partnership that warms into a lifelong friendship. One shared passion is education. “Part of [Holshouser’s] platform was putting public school kindergartens in North Carolina,” Hunt says. “Full-day kindergarten was part of my platform when I ran for lieutenant governor the same year. We worked together to put that in. That was a time of progress when we found common things between us, and we both carried our parties along, and the state benefited.”

By the end of Holshouser’s term — only one is allowed by law — the kindergarten program has grown from about 3,400 children to more than 80,000. Roads and bridges across the state have been vastly improved, the 16 campuses of the university system consolidated, community colleges strengthened, and rural health clinics established in areas of most need. The economy is booming, and more land has been brought into the state park system than under all previous governors combined. 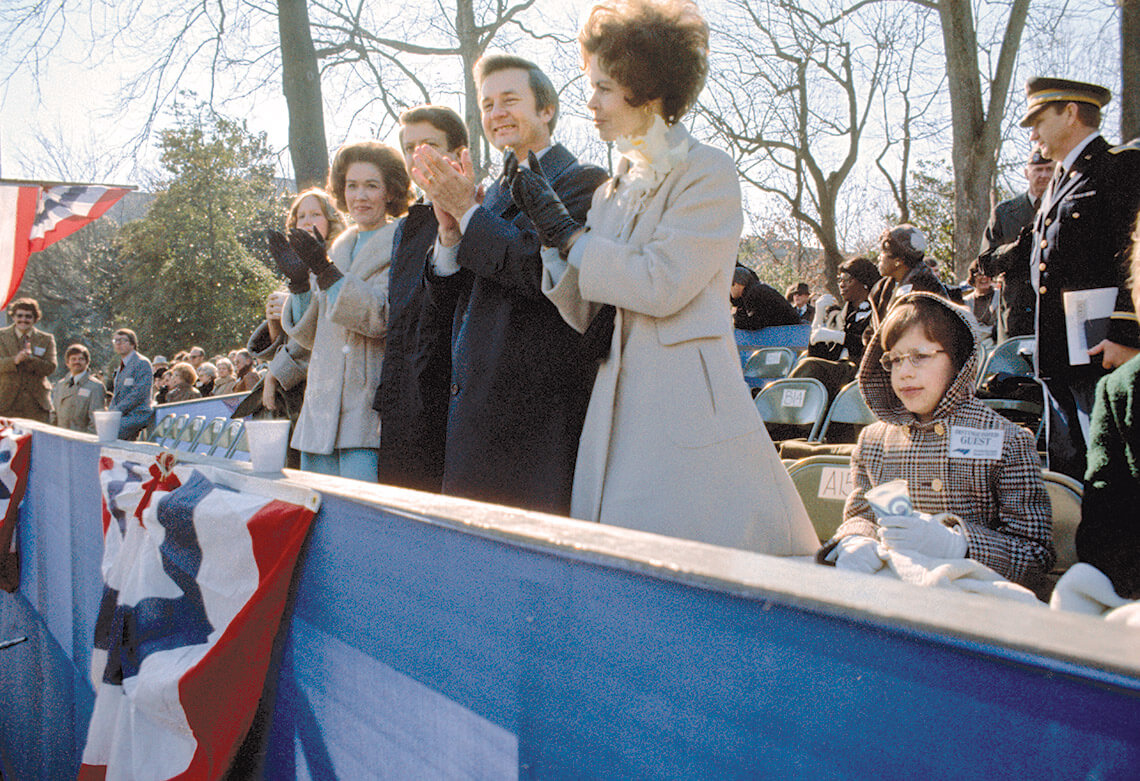 At the 1977 inauguration of Jim Hunt (second from right), Hunt was flanked by his wife, Carolyn (right), his predecessor, Gov. Jim Holshouser, and Ginny (far left) and Patricia Holshouser. photograph by The North Carolina Museum of History

But for all of his administration’s concrete accomplishments, in his farewell address, Holshouser emphasizes the power of ineffable virtues. “There’s another responsibility for people in government today that has to do with those two important words — care and trust,” he reminds his listeners. “… and as I close these four years, I want to urge you most of all to have faith in our system of government — and, yes, to have faith in those who care enough to offer themselves for public office and get the title of ‘politician.’ The great, great majority of those I have met — Democrats and Republicans alike — are honest, well-meaning, and hardworking.”

Holshouser gracefully exits to practice law in Southern Pines and Boone, and for most of the next four decades, he continues to work closely with his friend and colleague Hunt on a variety of issues, especially education.

Turnabout comes in the next election cycle: Jim Hunt is now governor.

In his first year, he initiates “North Carolina Tomorrow,” a statewide conference augmented by meetings in all 100 counties. Some 100,000 questionnaires echo the priorities of citizens: economic growth that preserves the character of communities and programs to better the lives and prospects of children.

With his own expansive agenda on education, economic development, the environment, and a host of other concerns, Hunt feels hamstrung by the statutory single-term limit. By now, most states allow consecutive terms for governors. “I proposed that North Carolina amend the constitution to permit succession for one term,” he says, “and then I had my political organization go out and work very hard to pass it.”

It is a tough sell, requiring a constitutional amendment with the approval of both houses of the legislature and a popular vote. Many conservatives, including Helms, actively oppose the referendum, but it passes, and now the office of the governor takes on a different character. “It means the governor can have a long-term view — and possibly a longer time to carry through a program. But it also means that the governor is going to be more apt to get support from the legislature,” Hunt explains. “It made a real difference and still does. It doesn’t guarantee anything, but it means a greater possibility of having progress.”

Hunt wins a second term and, after a hiatus, returns for two more terms, making his mark as perhaps the most effective governor in modern times, his main focus never veering from education.

“Those were big times,” he recalls. “We got great things done during those years.” Despite the divisive politics of Helms — with whom he later worked on some economic initiatives — he retains respect for the Republicans with whom he served, especially Holshouser. “North Carolina has primarily gone along with its better angels,” Hunt says, “and Jim Holshouser was one of those.”