For more than 250 years, the Coharie people have lived peacefully along the Little Coharie River in the sandhills of Sampson and Harnett counties. There, they found refuge from intertribal conflicts and the white Europeans who invaded their home in the Neuse River valley.

When the first English settlers landed on Roanoke Island in 1584, the Coastal Plain was populated by some 30 Indigenous tribes — numbering perhaps 35,000 individuals. By 1710, only about 5,000 coastal Native Americans remained. The Coharie, descended from the Neusiok, are one of the surviving tribes in homelands across the state, from Hatteras Island to the Great Smoky Mountains. Their name derives from the Tuscarora word for “driftwood.”

The Coharie place great value on their sense of community. Churches serve not just religious purposes but also as focal points for educational and cultural activities, including ceremonies to honor elders. A yearly powwow, begun in 1969, also unites the community while raising money for such programs.

Like many other tribes, the Coharie have struggled against a persistent lack of economic opportunity, resulting in stunted educational prospects and substandard housing for too many of their people. 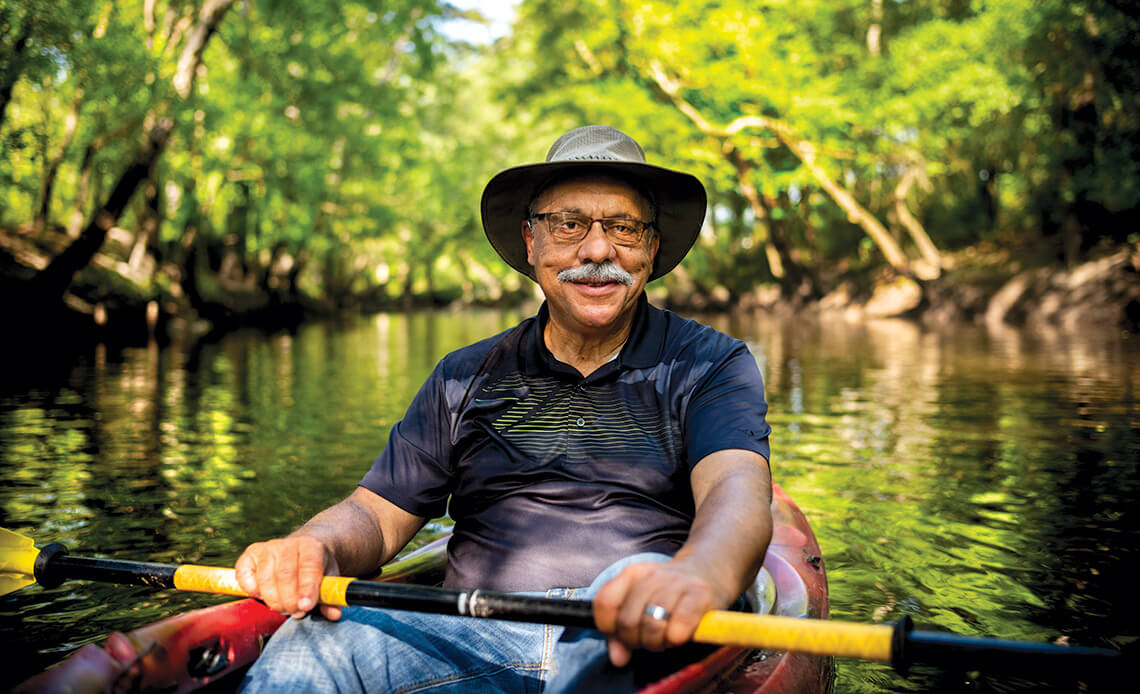 Since 2015, the Coharie Tribe’s Great Coharie River Initiative has restored and protected the waters that Tribal Administrator Greg Jacobs has loved since he was a boy. photograph by Charles Harris

Greg Jacobs, who takes on the job of tribal administrator for the first time in 1978, is well acquainted with the struggle. “My mother, who died at 89, only had a seventh-grade education,” he says. Jacobs, along with leaders in the Coharie Intra-Tribal Council, works to change that. In 1971, the General Assembly formally recognizes the Coharie, along with another small southeastern North Carolina tribe, the Waccamaw Siouan, or “People of the Falling Star,” who live in Columbus, Bladen, and adjoining counties.

Recognition makes both tribes eligible for grants and other economic benefits. Jacobs explains, “It made funds available to use in our self-determination to better the health, education, and welfare of our people.” And, he continues, state recognition carries another important benefit: “For a marginalized people that might seem invisible to somebody, it gave us a better positive self-image, that we were recognized by the state as a group of Indigenous people on land where we had lived forever.”

Even after being granted such official status, the Coharie don’t have political clout — they make up less than 1 percent of the population of the two counties. Indeed, no single tribe has enough members to be a statewide political force, so leaders from all of the tribes have long sought some kind of collective representation. In July 1971, that effort pays off with the creation of the North Carolina State Commission of Indian Affairs. Its mission is “to provide aid and protection and to serve as a voice for North Carolina’s Native American population.” Its 12 Native members (later expanded to 21) — each selected by their own communities — take on the charge of ensuring cultural and historic preservation while securing new economic and educational opportunities for all of the tribes.

To the larger community, the establishment of such a body might seem like a mere bureaucratic move. But to the tribes, it’s a game changer. “A ‘big moment’ is an understatement for what it means to the Coharie community,” Jacobs says. “Before the commission, there was no voice.”

But even with the commission in place, the Coharie, like their fellow tribes, have to overcome persistent bias and discrimination in their local communities. Jacobs recalls his first meeting with a county manager to explore ways they could work together. “Before I even got seated in his office, he said, ‘Mr. Jacobs, let me be quite frank with you.’ He said, ‘We’re not in favor of discriminatory groups like yours putting up barriers that we’ve just broken down.’ And I didn’t understand his statement, and it hurt. He wasn’t interested in hearing my voice.”

Thus, state recognition and the formation of the commission are the beginning, not the end, of a long road to progress — for all Indigenous groups in North Carolina.

The Lumbee of Robeson County have traveled much the same road as the Coharie. They gained state recognition in 1953, fought off the resurgent Ku Klux Klan in 1958, and are gradually achieving some measure of political power. Several milestones propel their cause forward.

In 1972, Pembroke State University (later the University of North Carolina at Pembroke) offers the first courses under the aegis of its newly created Department of American Indian Studies. In late August of that year, the Lumbee gain a legal advocate: Horace Locklear, the first Native American to practice law in the state.

The chain of historic firsts continues. Henry Ward Oxendine, a 32-year-old law student at North Carolina Central University, becomes the first Native American to join the North Carolina Legislature when he is appointed to fill the 21st District seat serving Robeson, Scotland, and Hoke counties upon the death of the popular incumbent, Frank S. White. He is also one of five new Lumbee lawyers graduating in the class of 1973, more than doubling the number of practicing attorneys to nine.

Lew Barton, also of Lumbee heritage, interviews Oxendine for the Doris Duke Charitable Foundation’s American Indian Oral History Program. Barton tells him, “My own father recognized long ago that the thing our people perhaps need most is legal talent.”

Oxendine replies, “Well, Mr. Barton, while I’m very encouraged about it … I think that this is just a beginning for us. I expect to see the day, and it won’t be very long, that in Robeson County, we will have Indians in any and all the professions.” More doctors, engineers, dentists, architects.

Oxendine grew up in the Union Chapel community, and after high school, he served for three years in the U.S. Air Force — a tour of duty that took him across the U.S. and into Canada. Now, he returns to Pembroke, where he intends to settle for life. “I think that it was in the Air Force that I sort of got some direction for my life,” he tells Barton.

He remains deeply grateful to his family and community, who supported him in his studies. “I wish that it was possible to take my diploma and cut it up into the various segments of people who have contributed, because there have been literally hundreds,” he tells Barton. “I think that it’s very good now in this stage of our development that Indian people are attempting to help other Indian people. It hasn’t always been that way.”

Though the Lumbee constitute roughly a third of the population of Robeson County, Oxendine is well aware that they cannot afford to wait for the largesse of mainly white commissioners and other local government officials. He says, “Our own elevation is going to have to come from within.”

And that is already happening. In 1971, Lumbee Bank (later Lumbee Guaranty Bank) is chartered, issuing $667,000 in stock to an investor group that is 97 percent Native American. It is a true community bank, set up to serve the interests of the Lumbee and their neighbors, an economic engine that can finance business ventures and home mortgages. It eventually expands into a dozen cities and towns.

And soon after Lumbee Bank opens its doors, so does a Native-owned newspaper, the Carolina Indian Voice, featuring a regular editorial called “As I See It” by Bruce Barton. Barton boldly wades into political, cultural, and racial affairs in Robeson County.

He zeroes in on the county power dynamic: “Indians and Blacks, generally speaking, are from the same mold,” he writes in the Bicentennial year of 1976. “They hold the political power in their hands but their bow remains unstrung. Their arrows have no points. They have never used their power. Their potential power has been dissipated by the old game of divide and conquer.” 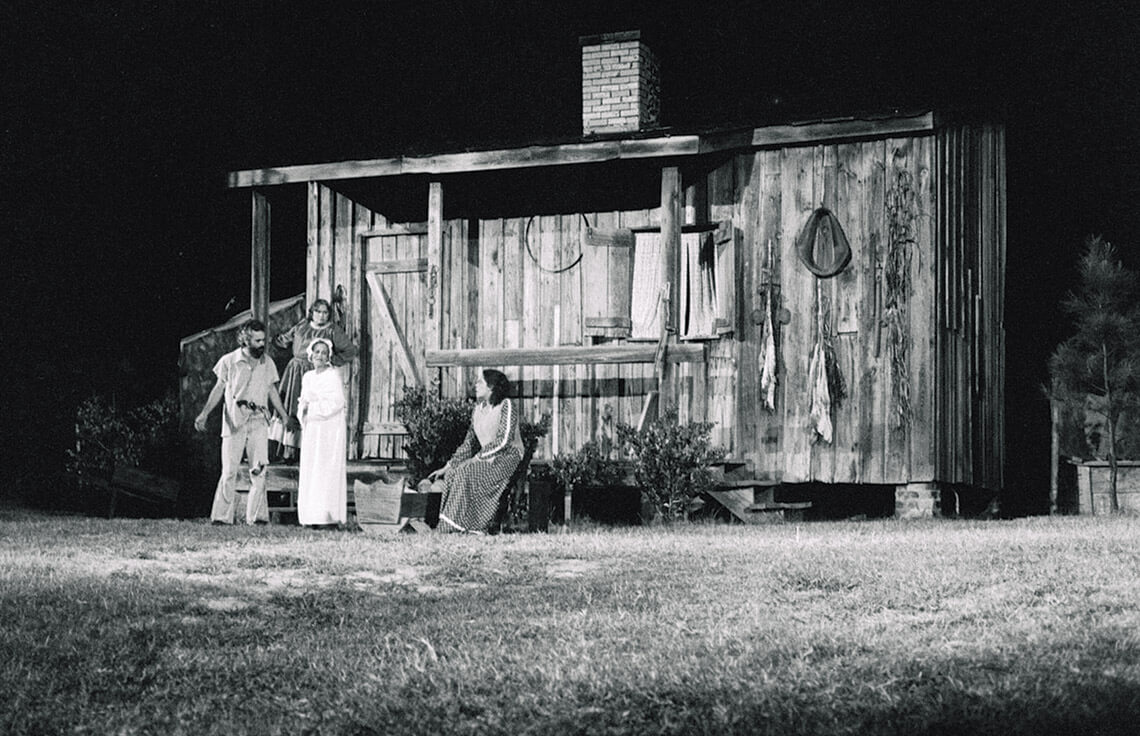 Another piece of the Lumbee cultural and political awakening comes with the staging of Strike at the Wind! The ambitious outdoor drama in two acts, written by Randolph Umberger, presents the story of Henry Berry Lowry, also called Henry Bear. The outlaw hero of the Lumbee waged a guerrilla war against the Confederate Home Guard after they executed his father and brother. Lowry’s personal fight continued until he disappeared in 1872, endowing him with an aura of eternal mystery.

At the close of the play, the narrator — an elder called The Leader — reflects on the meaning of Lowry’s struggle: “Upon this ground, Henry Berry Lowry fought for better or for worse. His time was a long time coming, but love is the second discovery of fire. And to each of you, we stretch forth our hand. May we, from this moment on, together affirm that there shall never be another time when to ask for the dignity of any man is to strike in vain at the wind.”

The Commission of Indian Affairs affirms the dignity of eight North Carolina tribes, which, by decade’s end, include more than 64,000 members, the largest Native population east of the Mississippi. Their time has indeed been too long in coming, but they are no longer invisible, and they are no longer silent.