By the close of the 1960s, developers have discovered the coastal counties in a big way. Communities like Manteo and Wrightsville Beach attract streams of vacationers and year-round residents — as well as the businesses to serve them: hotels, restaurants, souvenir shops, and stores. The Herbert C. Bonner Bridge, open for traffic since 1963, carries tens of thousands of tourists to far-flung Hatteras Island.

Even on that precarious, sandy shore, real estate becomes treasure, and builders erect acres of stilted houses — not just among the traditional communities on the Pamlico Sound side but also facing the wild and unpredictable Atlantic Ocean.

On the night of March 7, 1962, the Ash Wednesday Storm clobbered the islands without warning. It lashed the coast with 70-mile-perhour winds and 30-foot-high waves, wiped out 60 buildings, partially destroyed 1,300 other structures, and opened a new inlet near Buxton that turned Hatteras village into its own island. But far from dampening development, the storm opened the way for a surge of new building. Population growth on the Outer Banks eventually accelerates to almost double that of other regions in the state.

Even with the protections afforded by the designation of the Cape Hatteras and Cape Lookout national seashores, the need to control development in order to preserve the special and fragile nature of the coast — the very quality that makes the area so attractive to visitors and residents — becomes urgent.

In 1972, Republican James E. Holshouser Jr. wins the governorship, and Democrat James B. Hunt Jr. is elected to the powerful post of lieutenant governor. Though the two young politicians hail from opposing parties, their agendas are in accord.

As Hunt recalls, “[Holshouser] had a number of new ideas, but one of them was protecting the coast. He proposed a Coastal Area Management Act. Well, he proposed it, but I loved it.”

Their timing couldn’t be better. The federal Coastal Zone Management Act of 1972 makes available three-year grants to state governments to plan responsible development, management, and preservation of sensitive coastal areas. States are encouraged to coordinate activities ranging from the dredging of inlets to building structures, from preserving wild and recreational areas to offshore oil drilling. States have a great deal of latitude, but they must meet federal oversight requirements, including inventorying and designating areas of particular concern. 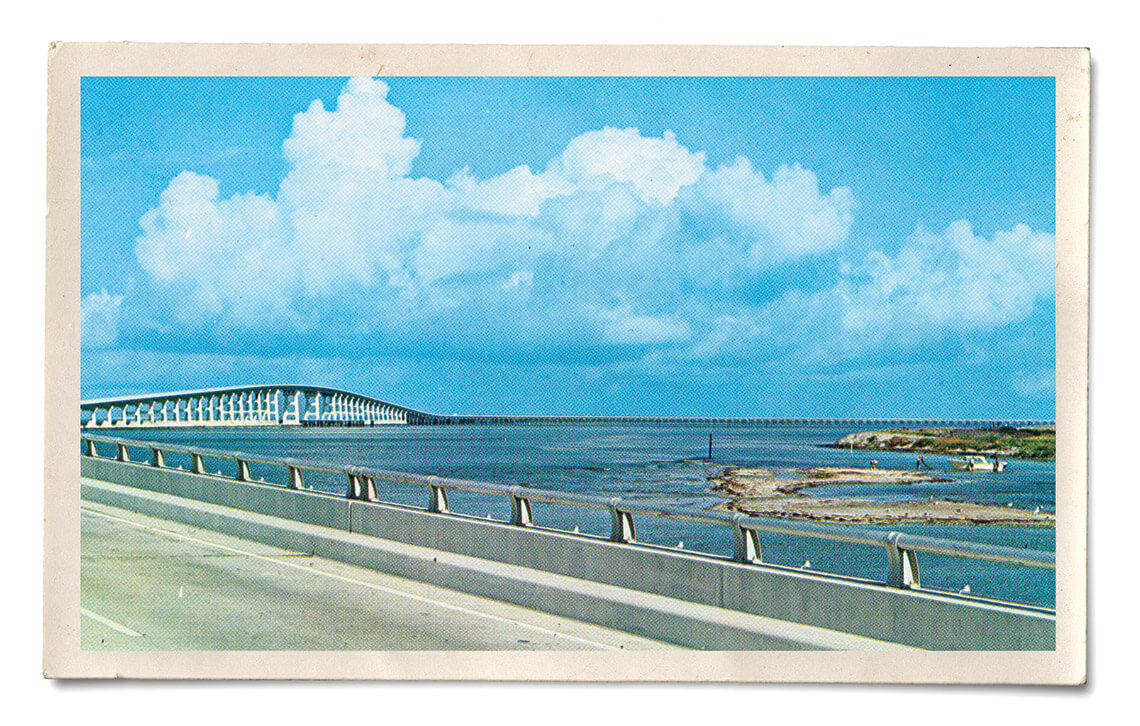 For more than 50 years after it opened in 1963, the Herbert C. Bonner Bridge served as a gateway to Hatteras Island, which was previously accessible only by boat or plane. photograph by WALTER H. MILLER, IN THE NORTH CAROLINA POSTCARD COLLECTION (P052), NORTH CAROLINA COLLECTION PHOTOGRAPHIC ARCHIVES, WILSON LIBRARY, UNC-CHAPEL HILL

The idea of coastal stewardship resonates deeply with Lieutenant Governor Hunt. “My father was a soil conservationist here in this county of Wilson,” he says. “So that was very much in my blood. It was a big deal in my life. So the whole idea of preserving the natural resources of North Carolina was very important to me.”

As the earliest draft of the bill makes clear, unless the pressures of increasing residential and industrial development are brought under coordinated control, “the very features of the coast which make it economically, esthetically, and ecologically rich will be destroyed.”

It’s apparent from the outset that CAMA, as the proposed bill comes to be known, will incite opposition from some members of the real estate and development industries, as well as from coastal politicians wary of regulations that might limit their autonomy. Hunt has no doubts about the moral or practical necessity of CAMA, “but the very idea of putting in laws that were going to have the effects that this one would have, in many minds, was just too extreme.”

Holshouser acts boldly. “He put this bill in immediately,” Hunt recalls of the 1973 legislative session, though it would take until the 1974 session to hash out all the details.

CAMA covers 20 coastal counties, from Currituck on the Virginia border, south to Brunswick on the South Carolina border, and east to the Outer Banks. It encompasses all of the coastal waters in the state’s jurisdiction: ocean waters, inlets, sounds, and estuaries.

A joint Senate-House legislative committee — co-chaired by two Democrats, State Senator William Staton and State Representative Willis Whichard — holds public hearings in the affected areas of the coast, addressing concerns and incorporating new ideas. Staton and Whichard do crucial yeoman’s work in shaping the bill. Their revised version in 1974 creates a 15-member Coastal Resources Commission to craft policy. Local government bodies nominate qualified coastal citizens, and the governor holds the power of appointment. The commission is guided by the 20-member Coastal Resources Advisory Council, made up of representatives from county and municipal government agencies.

CAMA stands as a piece of political virtuosity, requiring cooperation across district and party lines.

This close cooperation with local officials is key to getting support in the legislature, and much of the negotiation concerns who will serve on which oversight body and how they will be appointed. Local governments will take the lead in planning within their jurisdictions according to standards set by the state, with both responsible for enforcement.

Perhaps the most spirited opposition is launched by a coalition of developers from the New Bern area, who make their objections clear in open letters mailed to influential leaders along the coast. When the bill is reported out of committee to be debated on the floor of the House, representatives from several districts respond to the developers’ pressure by introducing 51 separate amendments that would greatly weaken the proposed system of regulations.

One proposed amendment would exempt from regulation all existing and approved subdivisions. Another would require a statewide referendum before CAMA could become law. Five others would limit the geographical area covered by CAMA, removing whole counties from its oversight. And fully seven amendments would reduce civil penalties for noncompliance so that they would become virtually meaningless.

All of the above and 15 other amendments are defeated.

With Holshouser’s staunch support, Hunt actively guides the process in the Senate. “I remember I put it into the right committee and made darn sure that they would be favorable and give it a fair consideration. They did — I’d appointed all the members of that committee,” Hunt says. “And they came out with a proposal to pass the law, and I don’t know that there had ever been a time in the history of North Carolina when the old crowd that wanted very little government involvement was so adamant. Some members of the Senate and other opponents howled — almost howled — when that bill came out … and they just raised Cain, one after another.”

The 1973 bill goes through some changes but emerges virtually intact, built on the original legislative findings: “The thrust of the goals is [t]o provide a management system capable of preserving and managing the natural ecological conditions of the estuarine system, the barrier dune system, and the beaches, so as to safeguard and perpetuate their natural productivity and their biological, economic, and esthetic values; [and] [t]o insure that the development or preservation of the land and water resources of the coastal area proceeds in a manner consistent with the capability of the land and water for development, use, or preservation based on ecological considerations.”

Hunt remembers the laborious process of shepherding CAMA to a vote. “The bill was studied carefully in committee, and it was voted out favorably — to enact this Coastal Area Management Act and to protect our coast. Very few states in America had done anything like it, not like we did.”

One key to success is resolving a longstanding rift between two state agencies that will be essential to carrying out the mission of CAMA: the Department of Natural and Economic Resources (DNER), which oversees environmental concerns, and the planning office of the Department of Administration (DOA), which acts as the business manager for the state, responsible for a wide range of practical activities, from purchasing and contracting to managing state vehicles and property. Now, the word goes out from the two men at the top, Secretary of DNER James E. Harrington — himself a former resort developer — and Secretary of Administration William Bondurant, defining clear lines of authority for each agency and pledging mutual cooperation: DNER will be in charge of regulations, and DOA will handle planning. 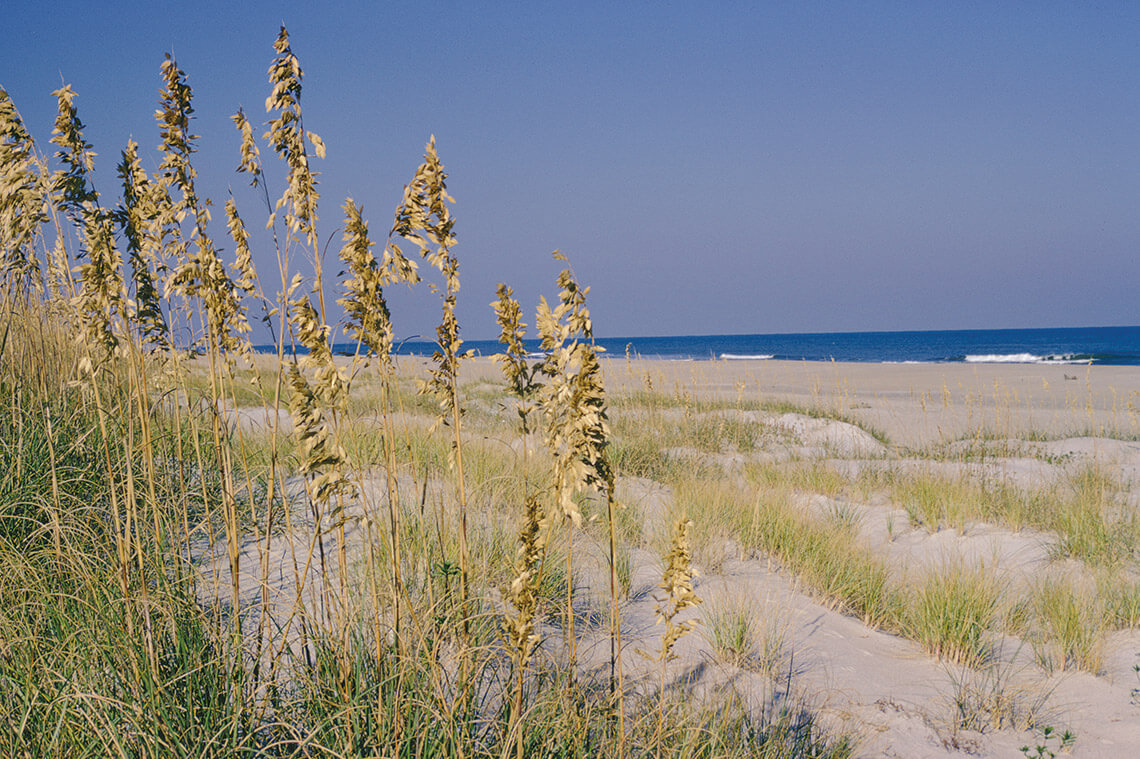 The crafting and passage of CAMA stands as a piece of political virtuosity — requiring the cooperation of senators and representatives from across district and party lines, coastal county commissioners, city councilors, and industry representatives, as well as effective management by state agencies acting in harmony with clarity of purpose.

“It was a turn in the history of North Carolina — the legislature passing a powerful piece of legislation to commit the whole state to preserving our beautiful, wonderful coast,” Hunt recalls. “And I am so proud that we did that and that we then stuck with it.”

CAMA is an astonishingly progressive environmental achievement, made possible by two leaders of opposite parties who find common ground in service to a greater good than their own personal advancement — to the voters who elected them and generations of North Carolinians yet unborn.