By 1970, North Carolina seems to have it all: a state-run art museum, a first-class symphony, an impressive university and community college system, NASCAR and other big-league sports, public television, a chain of pristine national seashores, and hundreds of square miles of breathtaking national forests connected by the Blue Ridge Parkway.

What it doesn’t have is a state zoo.

During the previous decade, the Raleigh Jaycees set out to change this. They educated state legislators about the cultural and economic benefits that a zoo would bring to the state — convincing its NC Zoological Study Commission of the merits of their argument. Then, they sponsored an NFL exhibition game between the Washington Redskins and the New York Giants — 33,500 fans crowded into Carter-Finley Stadium in Raleigh to watch the Redskins roll over the Giants 31–13. Ticket sales generated $40,000, twice the projected budget for a feasibility study.

The legislature’s newly formed NC Zoological Authority assembles a nine-member team that includes some of the best people in the field. Whatever locale is selected must meet 14 stringent conditions, among them that the site must cover at least 1,000 acres and that the home community must pledge a minimum of $150,000 to the project.

For more than two years, the site selection committee explores possible locations in Albemarle, Concord, Statesville, Butner, Chatham County, and Asheboro. One suitor is The North Carolina Zoological Society, Inc., a coalition from Greensboro, Winston-Salem, and High Point, incorporated as a nonprofit in 1968.

In 1971, the committee selects a wooded parcel of 1,005 acres that includes Purgatory Mountain in Randolph County, southeast of High Point near Asheboro. A new group is formed in Asheboro and assumes The North Carolina Zoological Society’s name and mission. Its fund-raising arm, headed by David Stedman, raises $435,000 in just five weeks to match the legislature’s $2 million bond and another $2 million county bond for the necessary infrastructure at the site. 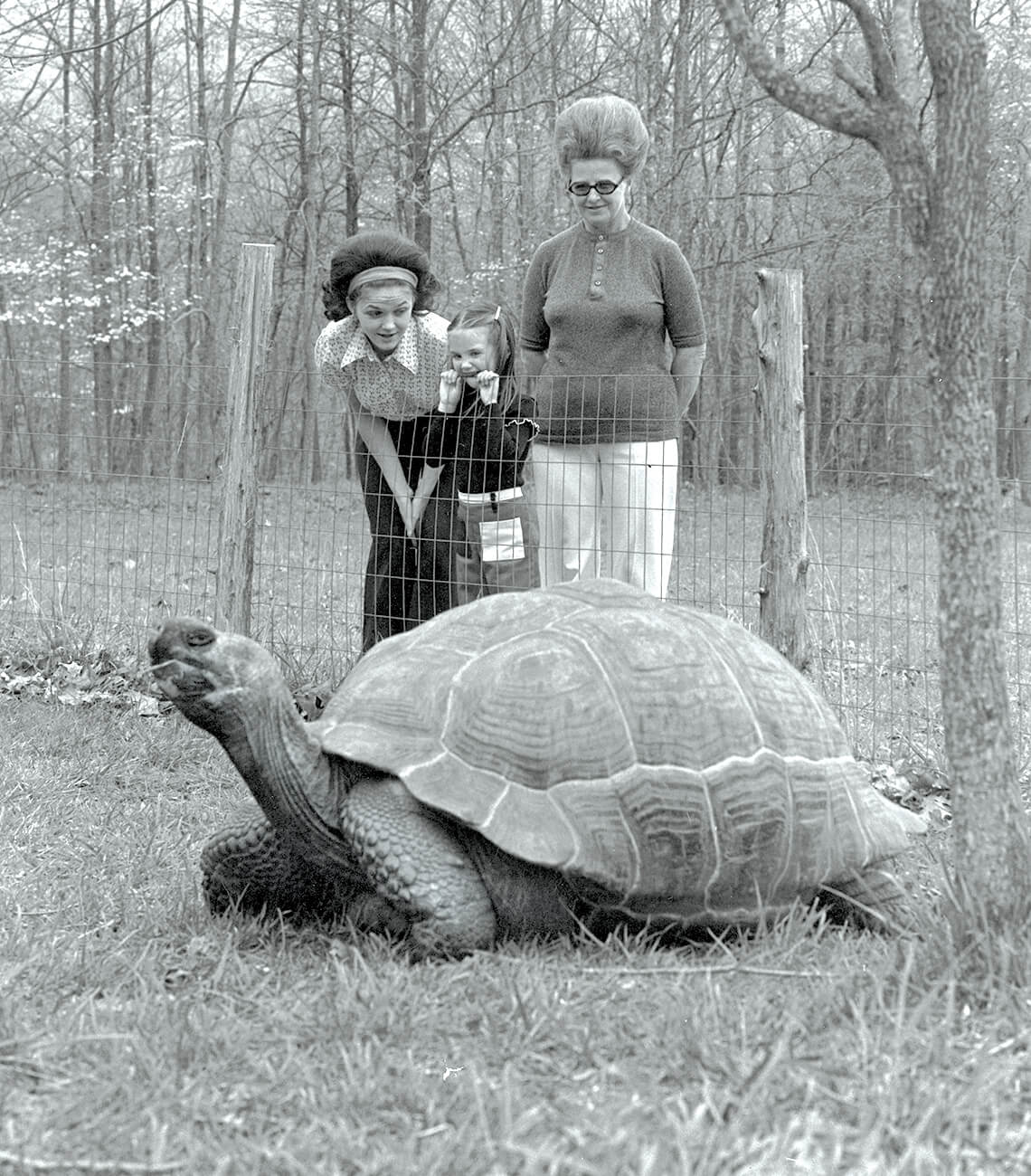 The advisory group includes several visionaries in the field of zoo design and purpose: George Speidel, who oversaw planning for the new Milwaukee Zoo; Theodore H. Reed, a pioneer of conservation biology and breeding programs at the National Zoo in Washington, D.C.; and William J. Hoff, who has held top positions at the Lincoln Park Zoo in Chicago, the Cincinnati Zoo, and the St. Louis Zoological Park. Hoff is selected to become the NC Zoo’s founding director and master planner. One of his fellow “founding fathers” is Dwight Holland, who helped secure the Asheboro site and becomes its first curator of design.

It’s an ambitious undertaking with an equally ambitious goal — not just to protect wildlife but also to create an empathetic connection between visitors and the animals, thus enlisting them in the mission of conservation of animals and their habitats in the wild.

Creating a zoo is an expensive and complex undertaking with lots of moving parts — many of them alive and pursuing their own natural imperatives, which may or may not be compatible with the aim of a zoo.

In the 19th century, American zoos were essentially jails. Animals were kept in secure, locked enclosures — often just small cages — to be viewed as entertaining objects of curiosity. Victorian-era zoos often enclosed animals in ornately beautiful “Reptile Houses,” “Monkey Houses,” and the like.

In the early 20th century, zoos assumed the character of art museums and came under the sway of the Modernist movement. Enclosures became canvases on which animals assumed their roles as parts of a composition, a scene. They featured faux terrain crafted from formed concrete, water features, and moats — exhibits as living landscapes. 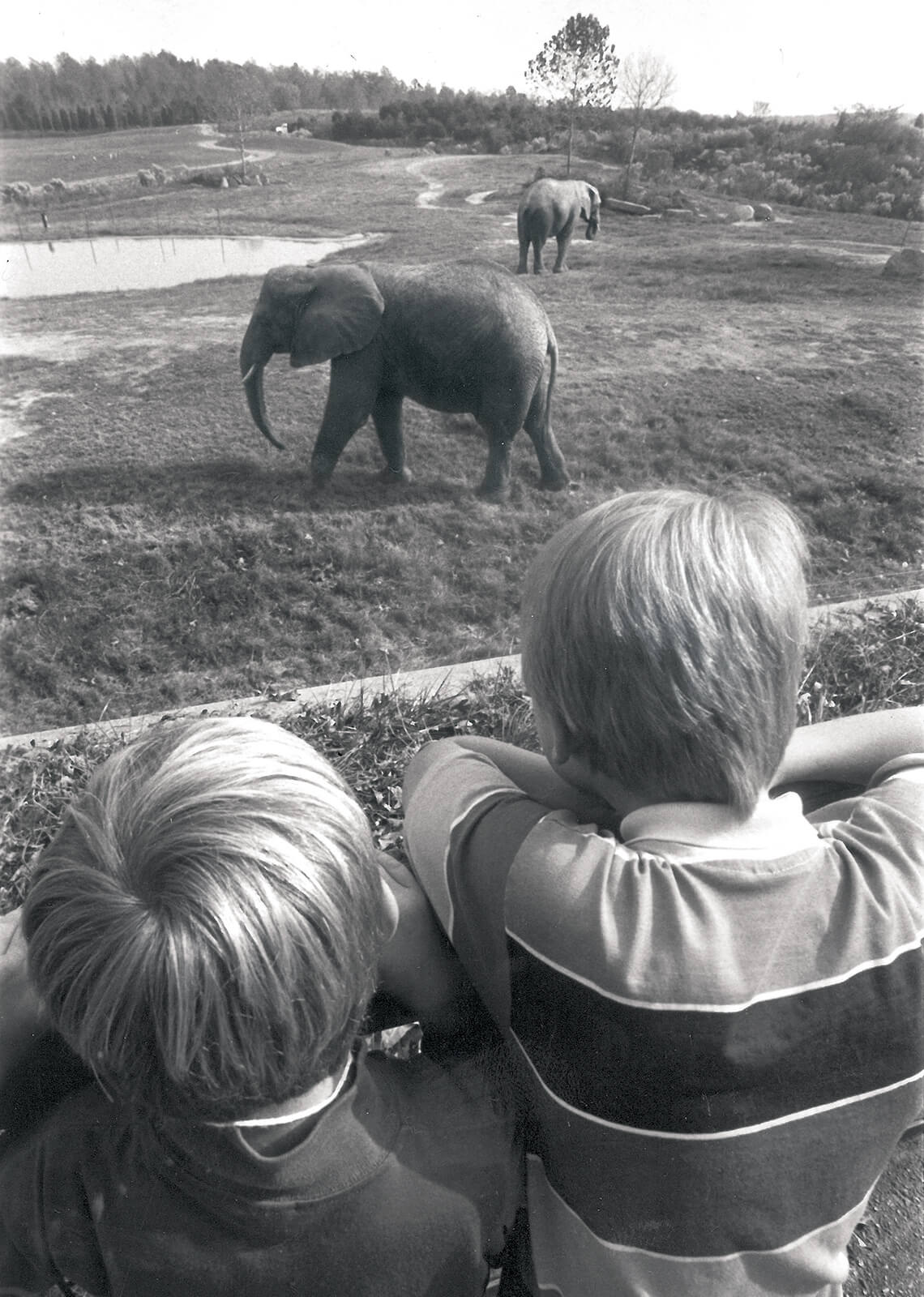 Only in the mid-20th century did the welfare of animals become central to zoo design. Dr. Heini Hediger’s 1942 book, Wild Animals in Captivity, quietly started a revolution in zoo philosophy and design. Hediger addressed such basic issues as “the problem of confined space,” exploring both the biology and the psychology of captive animals, including the technical challenges of building enclosures and questions about ethics, health, safety, territory, the drive to escape (or not), and the ecological niche occupied by the same species in the wild.

Hoff and his associates envision a new kind of zoo, one that keeps animals inside habitats as much like their natural homes as possible. It’s a relatively new paradigm: physically, spatially, architecturally, philosophically, ethically, environmentally — even financially, as most zoos are not owned by states. Habitats will be arranged as “zoogeographic clusters,” starting with Africa. The enclosed territories will feature topography and plants that replicate the natural world. Barriers will be invisible so that visitors forget they’re in a zoo and feel like they’re entering the animals’ habitats. The plan is called “Alive.”

And with good reason. “Thus, this presentation represents not a fixed construction blueprint,” reads the master plan, “but rather a flexible guideline for the future, a guideline that will be continually updated in the light of new experience, while constantly maintaining an honest concern for ecological integrity. The plan is actually alive.”

And it is as much an ethical and social undertaking as a zoological one. “The North Carolina Zoological Park intends to express the highest ideals of our society: diversity, freedom, compassion, and a respect for nature. The Zoological Park will be as concerned for the animal’s welfare as for the visitor’s pleasure.”

Creating a wild animal park would be daunting enough, but add people to that equation, and it becomes exponentially more difficult. You’re trying to accomplish two apparently contradictory things at once: allowing the animals to live as naturally as possible without artificial disruption, and inviting a stream of visitors to observe them as intimately as safe design will allow — a completely unnatural situation.

You have to protect the people from the animals — every zoo professional’s nightmare is to have somebody’s child slip through a guardrail and be mauled by a lion, as happened at the National Zoo in 1958. You need to protect the animals from one another — so that, say, a territorial male polar bear doesn’t kill a cub. And animals unaccustomed to captivity need to be protected from injuring themselves in frenzied efforts to escape.

Just as difficult, you have to protect the animals from people harassing them, even climbing into the enclosures to touch them. And because the whole point is to draw the maximum number of visitors, your very success magnifies the challenge. 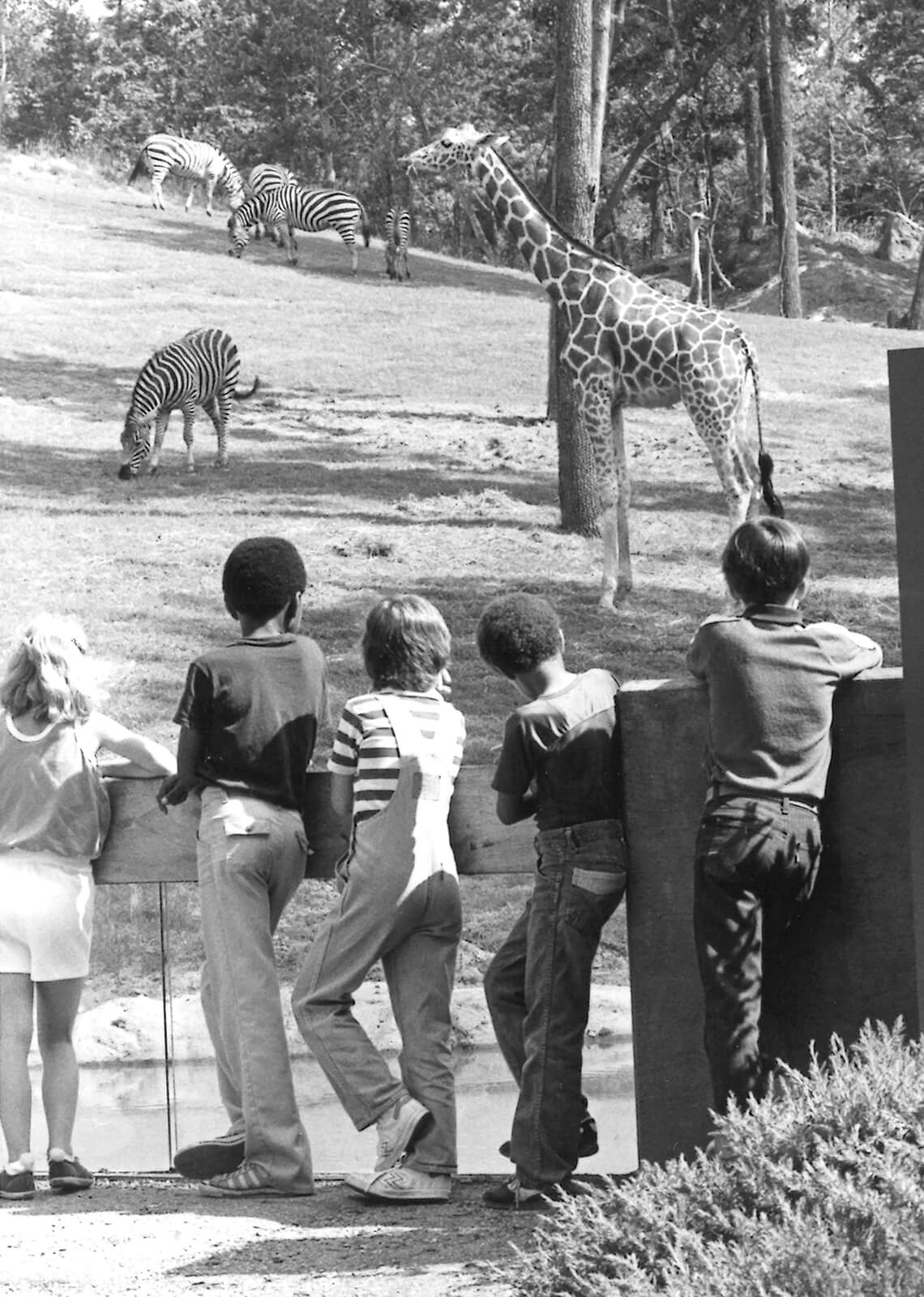 The Galápagos tortoises had lots of company, including giraffes and zebras. photograph by North Carolina Zoo

In addition to the costs of constructing the enclosures and acquiring the animals, feeding them, and providing veterinary services, expenses include salaries for the director and curators, keepers, maintenance crews, security personnel, education specialists, clerical support, and staff to interact with the crowds of visitors, from busloads of school-children to vacationing tourists.

While the ambitious plan of a habitat-centered zoo is still on the drawing board, an interim zoo takes shape on the site: a modular office and a welcome area, then sturdier offices for the staff and temporary chain-link fence paddocks. By 1973, the interim 21-acre zoo is ready to receive its first residents, a pair of giant Galápagos tortoises named Tort and Retort. Soon, they have plenty of company, including otters, rhinos, slow lorises, gibbons, even a tiger — some 250 creatures in all. Two young arrivals, an African elephant named C’sar and a chimpanzee named Hondo, quickly become favorites.

Lt. Gov. James B. Hunt dedicates the North Carolina Zoo in August 1974. Though still in its nascent stage, the zoo is an immediate hit, drawing thousands of visitors. Two years later, workers break ground for the permanent habitat-centered zoo half a mile down the road. By the end of the decade, the first African habitat opens, a mixed 4.5-acre landscape of forest and grasslands, punctuated by dry washes and natural-looking formations that mimic the regional granite-gray ridge rock and really function as invisible containment barriers for the grazing zebras and giraffes and the roaming ostriches. Other habitats soon follow, home to baboons, chimpanzees, elephants, and lions. 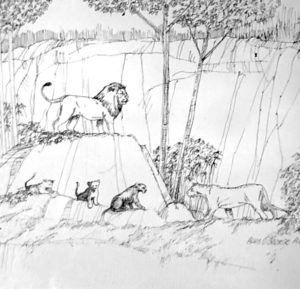 Dwight Holland helped bring the zoo to Asheboro. As its curator of design, he developed plans for habitats as well as the artificial rocks that enclose those habitats. illustration by Alvis George

“It really helps with the animals’ health and well-being to be able to give them as large a habitat as possible and places they might be able to get relief from being right at the guests’ view, places to kind of hide behind,” explains Crista McGee, who starts as a design intern under the mentorship of Dwight Holland and in time becomes director of facilities operations. But the trade-off for the visitor might be losing a continuous close-up view of the animal.

Memsy Price, a writer from Chapel Hill, recalls, “I remember my parents taking my sister and me shortly after the new ‘natural habitats’ debuted and being simultaneously amazed at the scale of it and kind of mad that the elephants were so far away.”

Over the following decades, in fulfillment of its flexible long-range plan, the zoo expands into the world’s largest by area, with 500 developed acres populated by 1,800 animals, including African and North American habitats, conservation research, and a captive breeding program. It stands at the crossroads of what American zoos used to be and what they now must aspire to become: not just a menagerie of captive animals, but also a living habitat, truly alive.

Coming in May: A governor and his lieutenant find common ground.