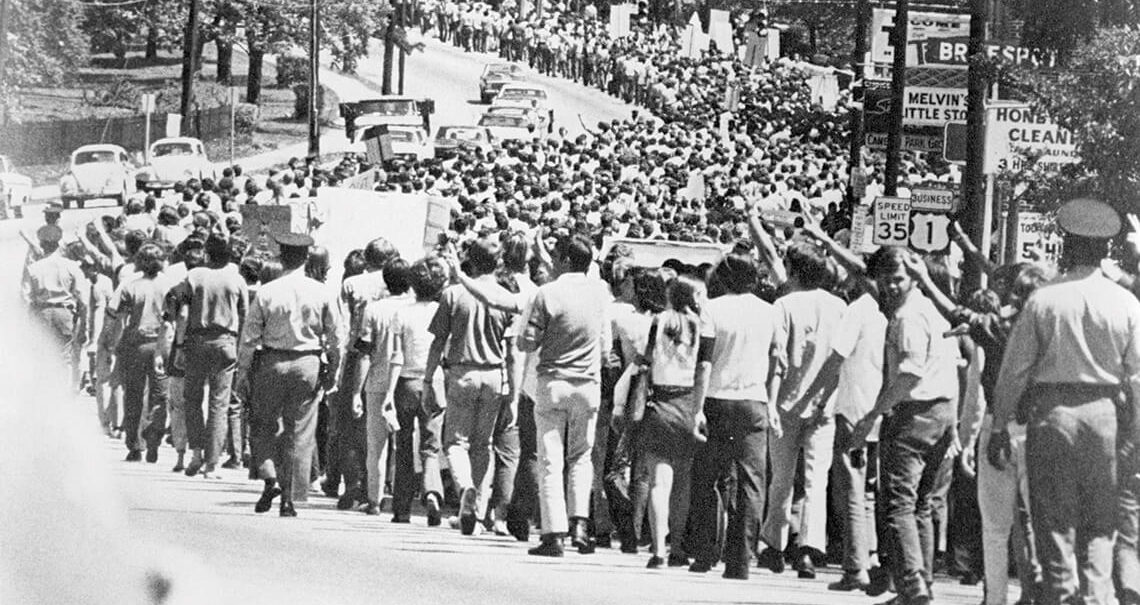 For 30 years, North Carolina has moved inexorably toward a future connected by better roads and electrical grids, a unified system of colleges and universities, a stronger economy, and the advancement of civil rights.

The wartime 1940s propelled the state into manufacturing overdrive of textiles and ships, even as a literal army of tens of thousands of newcomers swelled its military camps and bases, the Cape Fear River shipyard, and the Fontana dam site. The 1950s captured the ebullient postwar optimism of a state on the move — new highways full of shiny cars driven by GI Bill-educated veterans speeding their families toward leisure destinations, while a coalition of private and public partners created a research oasis in the Piedmont and civil rights activists pressed forward with desegregation.

In the 1960s, the state was christened the “Dixie Dynamo” for its creative energy across a wide range of endeavors, from entrepreneurial high-tech business to environmental preservation to a burgeoning arts and literature scene. When four young Black college students took a seat at a whites-only lunch counter in Greensboro, they inspired a nonviolent reckoning on civil rights that swept the nation and made history.

Now, the 1970s takes on a different character — as a decade of disruption.

Some disruptions change the community all at once and forever — for the good.

Native tribes have long battled for equality, a political voice, and economic prosperity. In 1971, North Carolina establishes the State Commission of Indian Affairs and recognizes the Coharie and Waccamaw Siouan tribes. The first American Indian-owned bank in the U.S. is established in Pembroke by members of the Lumbee tribe. And in 1973, the Lumbee of Robeson County achieve a major political breakthrough: Henry Ward Oxendine wins election to the General Assembly — the first Native American in history to do so. 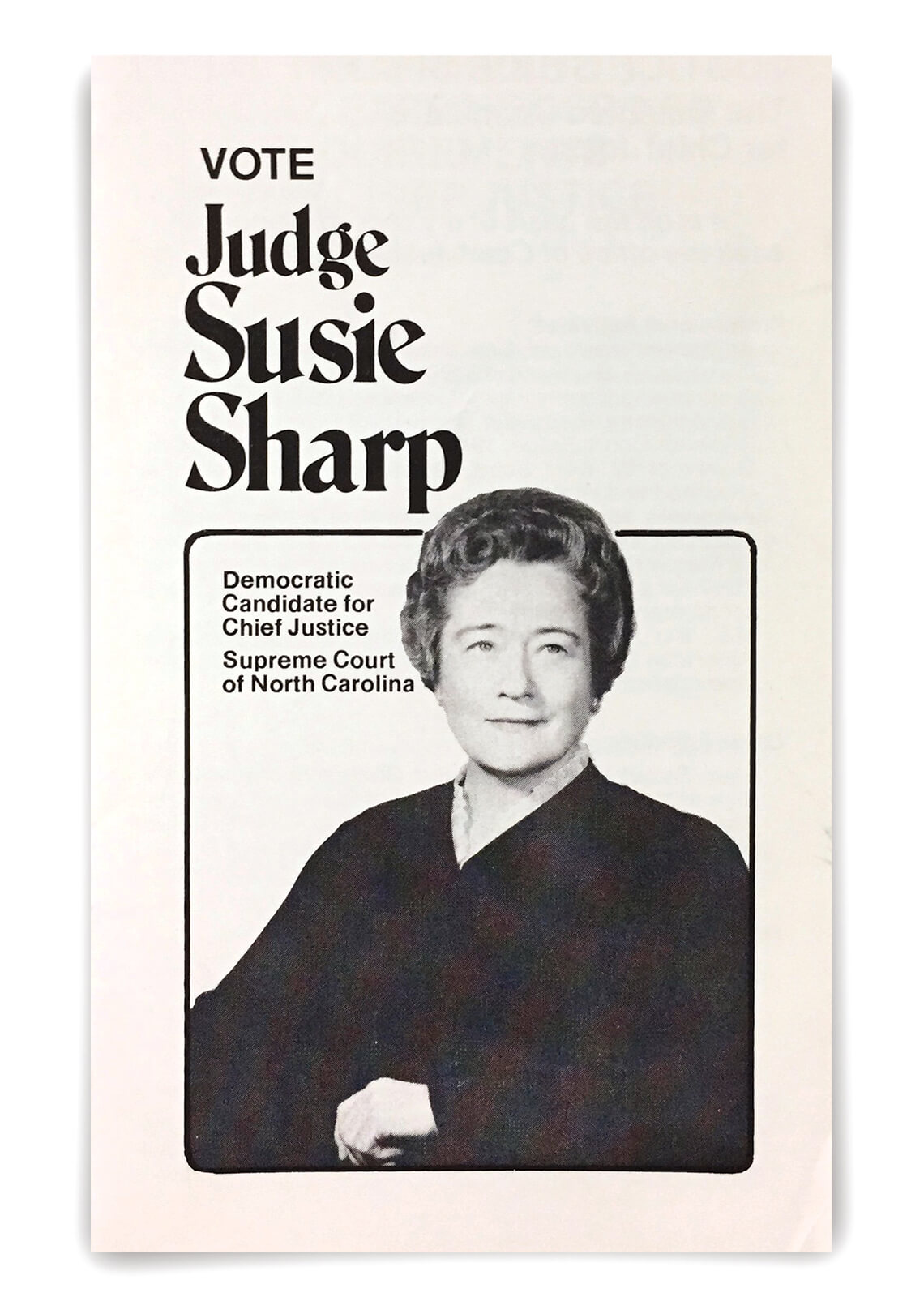 In 1974, Susie Sharp, who grew up in Reidsville, became the first female chief justice of the North Carolina Supreme Court.

Meanwhile, the state gains a sudden influx of new citizens from cultures halfway around the world. As the Vietnam War reaches its disastrous conclusion in 1975, some 125,000 Vietnamese refugees flee to America — about 2,400 of them settling in North Carolina by decade’s end. In the 1980s, another wave emigrates. The refugees include Laotians and Hmong tribespeople, who were fierce U.S. allies in the war.

Some of the disruption leads in a creative direction. The planners of the new North Carolina Zoological Park in Asheboro throw out the old model of keeping wild animals in captivity and replace it with a whole new paradigm, which they call “Alive.” Previously, zoo animals were kept in enclosures where they could be viewed for entertainment or educational value. The new model re-creates their native habitats. The zoo, occupying 1,005 acres including Purgatory Mountain, opens in 1979 and eventually becomes an adventureland of rain forest and African savanna, Sonoran Desert and North American wilderness. 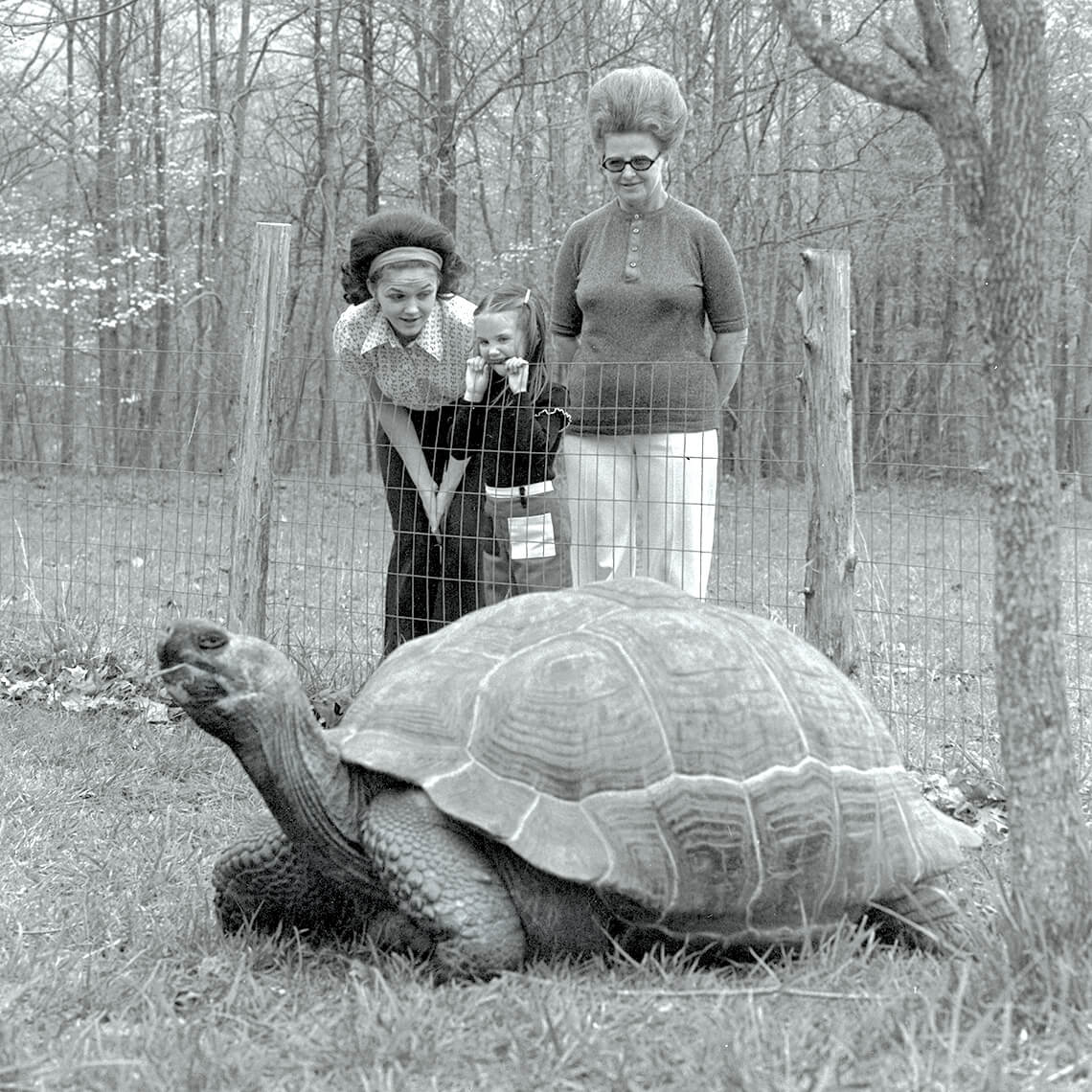 The first residents of the NC Zoo were a pair of Galápagos tortoises. photograph by Clay Nolen/North Carolina Zoo

Some disruptions tear the fabric of a community and take decades to mend.

Court-ordered desegregation of Wilmington’s high schools for the 1969-70 academic year brings always-fraught race relations to a head. Rather than desegregate all schools, the school board closes the all-Black Williston Senior High School, forcing its students to be bused to two formerly all-white schools. In January 1971, citing mistreatment by administrators and discrimination by teachers and white students, Black students declare a citywide boycott. Led by Benjamin Chavis, an activist from Oxford, they make their headquarters in the Gregory Congregational Church and draw up a list of grievances and demands.

Several white businesses go up in flames, including Mike’s, a neighborhood grocery store near the church. The police shoot and kill a Black student leader. Next day, a white vigilante is killed in the act of attacking the church.

Through the long ordeal, a few reasonable people exercise remarkable bravery in trying to heal the racial divide. But the continued violence at last brings in the National Guard. Ten people — Chavis, eight other Black men, and a white female social worker — are arrested, tried, and sentenced to long prison terms. Christened the Wilmington Ten, they are later proven to be innocent scapegoats. In 1980, the federal Fourth Circuit Court of Appeals overturns their convictions. 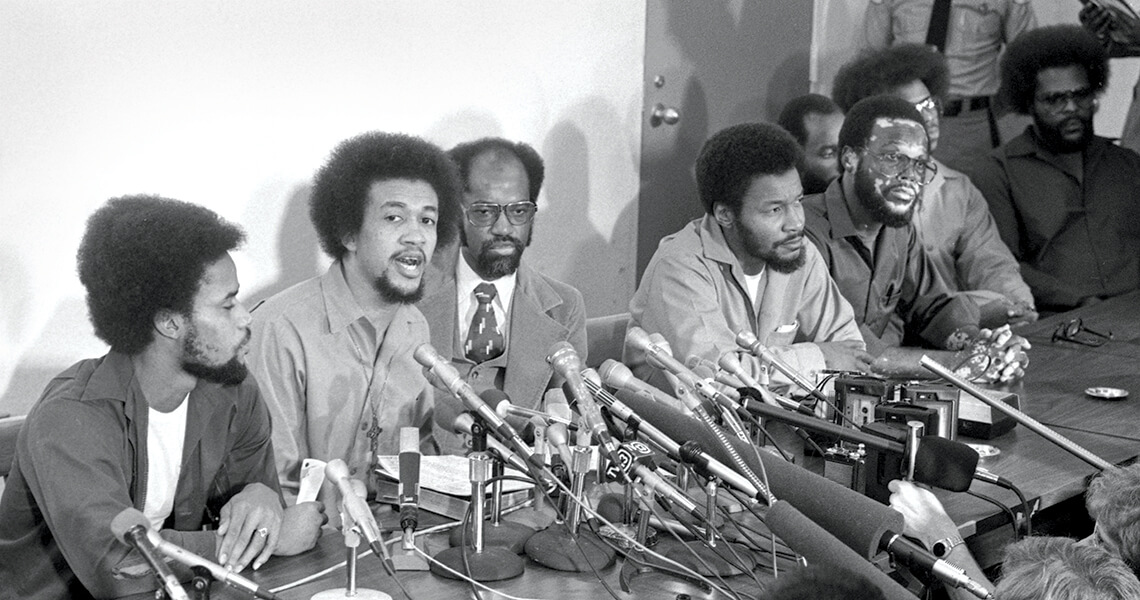 In 1971, a group of civil rights activists known as the Wilmington Ten were wrongfully convicted and imprisoned for nearly a decade. photograph by The News & Observer collection, courtesy of the state archives of north carolina

One event rends the fabric of a city in neighboring South Carolina.

On the morning of September 11, 1974, Eastern Airlines Flight 212 is approaching Charlotte’s Douglas Municipal Airport in heavy ground fog. Members of the flight crew are distracted by conversations “on several nonoperational subjects” and fail to heed the altitude alarm. The Douglas DC-9 crashes into a muddy cornfield three miles short of the runway, killing 72 people — 38 of them from Charleston. The victims include a newly promoted admiral, a former spokesman for the North Carolina governor, and the father and two brothers of a boy named Stephen Colbert, who will go on to TV fame. Miraculously, 11 people initially survive the second-worst air disaster in North Carolina history.

From the days of Reconstruction following the Civil War, North Carolina has been a Democratic stronghold — which, in former days, was the party of white supremacy. Now, the Democratic Party has embraced civil rights, and, in a landslide vote, Republican Richard Nixon has won the White House, executing a “Southern strategy” of appealing to white, formerly Democratic voters with coded racial messages. In 1972, for the first time in the 20th century, North Carolinians elect a Republican governor: James E. Holshouser Jr.

But voters also elect a rising Democratic star, James B. Hunt Jr., as lieutenant governor, and return a Democratic-controlled legislature. As presiding officer of the state senate, Hunt arguably wields as much power as the governor, championing the passage of popular legislation, such as an act increasing pay for teachers.

In North Carolina, the 1970s takes on a different character — as a decade of disruption.

In 1976, Hunt wins election to governor with 52 percent of the vote. At the beginning of his term, the General Assembly — augmented by a popular mandate — passes legislation that allows the governor two consecutive terms in office. Hunt becomes the first governor to succeed himself. Then, after a four-year interim, he wins two more consecutive terms, for a total of 16 years in the governor’s mansion.

While Holshouser is still governor, he and Hunt support a bipartisan bill called the Coastal Area Management Act (CAMA), an effort to steward the shorelines of North Carolina’s 20 coastal counties in concert with local governments. The goal is “preserving and managing the natural ecological conditions of the estuarine system, the barrier dune system, and the beaches, so as to safeguard and perpetuate their natural productivity and their biological, economic, and aesthetic values.” 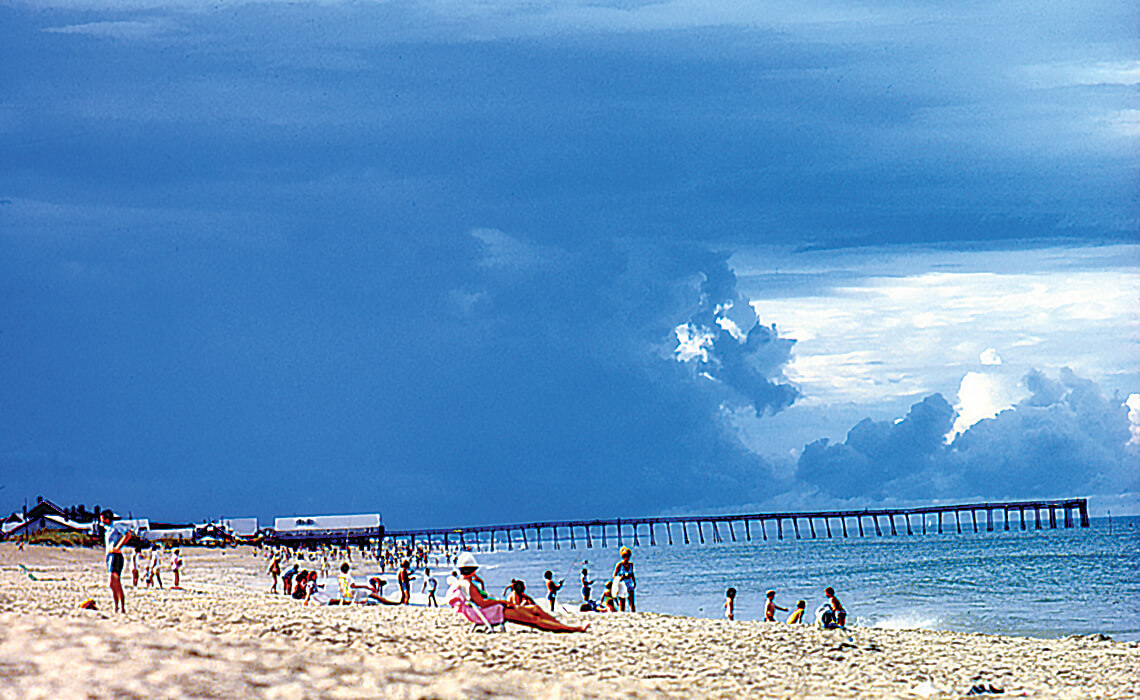 In the 1970s, North Carolina was shaped by national events as well as local initiatives — 1974 legislation preserved the beauty of Kill Devil Hills. photograph by William A. Withington, Courtesy of the Outer Banks History Center, State Archives of North Carolina

In a decade blessedly free of landfall by major hurricanes, as tourists stream across the Bonner Bridge onto the Outer Banks — now a hot vacation spot — and developers site major projects in the villages between National Seashore zones, CAMA comes just in time. Years in the making but timely in its appearance, the revolutionary disruption of unbridled coastal development, like so many others, comes two ways: gradually, and then suddenly.