The dream is extraordinary: to create a brand-new city of 50,000 people on 5,180 acres of a former slave plantation in rural Warren County, designed, built, and governed by Black residents — complete with free public transportation, 24,000 new jobs in manufacturing and white-collar industry, abundant housing, and an integrated population engaged in a progressive model of civic cooperation.

It will be called Soul City.

Warren County is a landlocked expanse of cotton and tobacco farms — punctuated by small towns like Macon (population 179), Norlina (population 969), and Warrenton (population 1,035) — with a total population in 1970 of fewer than 16,000. Indeed, during the previous decade, the county lost almost a fifth of its residents. The average per capita income is just $1,730 in 1969. It has no seacoast harbor or river port, no crossroads for commerce, no special tourist attraction, no thriving industrial base. 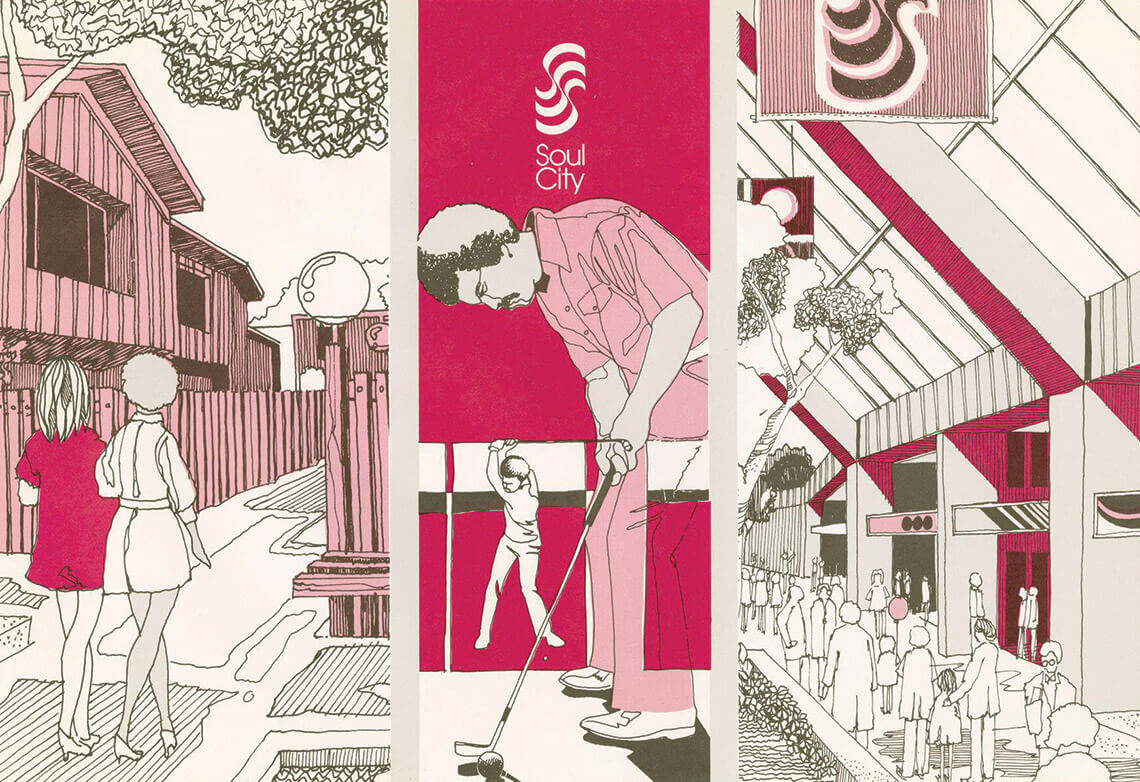 The population is two-thirds Black, yet whites control all of the county and city governments.

The location does offer a few advantages: Route 1 from Raleigh, an hour to the south, runs within a mile of the proposed site, tucked just under the Virginia line, less than 10 miles east of Kerr Lake — an ample watershed — and some 50 miles from I-95 but close to the single-track railroad line. The place offers a blank slate, free of existing blight and entrenched municipal politics. Still, it would seem to be far from an ideal site for such an ambitious undertaking.

But if the challenge is formidable and the dream audacious, so is the dreamer, Floyd B. McKissick Sr.

As a young graduate of Morehouse College and a World War II veteran, McKissick sought admission to the University of North Carolina Law School — and was denied on account of his race. So he enrolled at the North Carolina School of Law, and Thurgood Marshall of the NAACP, along with others, filed a lawsuit on his behalf. In 1951, the court ordered UNC to admit McKissick.

As a lawyer who has already served as youth chairman for the state branch of the NAACP McKissick becomes a fierce advocate for civil rights protesters trying to desegregate lunch counters, Black workers seeking fair treatment from the Tobacco Workers International Union, and the Congress of Racial Equality (CORE), which names him as its national director in 1966.

That same year, James Meredith, the pioneer Black student at the University of Mississippi, sets out on his “March Against Fear,” a solitary walk from Memphis, Tennessee, to Jackson, Mississippi. He aims to promote Black voter registration and draw attention to the segregation and discrimination that are rampant in the South. He doesn’t get far before he is shot and wounded by a white man. McKissick teams up with Dr. Martin Luther King Jr. and Stokely Carmichael to finish the march. By the time they reach Jackson, Meredith has rejoined them, and they lead some 15,000 marchers. 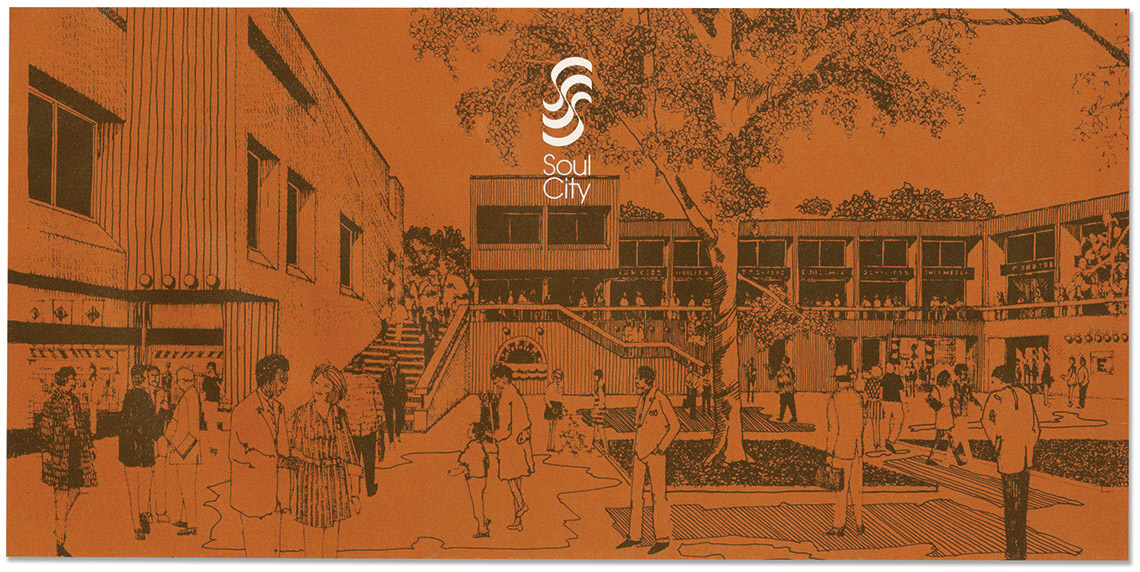 McKissick hoped to attract Black and white residents with a wide range of skills and from all walks of life. Photography courtesy of HERITAGE IMAGE PARTNERSHIP LTD/ALAMY, SBS ECLECTIC IMAGES/ALAMY

But years of arguing lawsuits and organizing demonstrations have convinced McKissick that racial equality will become possible only when Black citizens enjoy true economic opportunity. For him, Soul City is the civil rights movement.

“For too long, we have tended to categorize or divide economics from politics or politics from economics, when they are in fact tied so closely together that it is difficult to separate them,” he maintains.

He draws inspiration from his Army experience in Europe, having seen firsthand how a concerted and well-funded government effort could rebuild devastated cities, and conceives the idea for Soul City — a kind of utopia that will bring together political and economic power for Black citizens. “Soul City actually started after World War II, in my mind. And it was first talked about when we saw the use of the Marshall Plan.”

Soul City is not some wild scheme but the logical embodiment of McKissick’s conviction that economic opportunity is the key to racial equality. His plan calls for an industrial park, suites of offices, schools, shopping centers, recreation areas, even a lake — all accessed by a wide entry boulevard.

To finance the development, McKissick turns to the federal government. “Another precedent for this proposal is the land-grant colleges established during the early years of this country,” he writes.

He makes a compelling case to the administration of President Lyndon B. Johnson, and Soul City is chosen as one of 150 Model Cities projects — many of the others in metro areas such as Boston, Atlanta, and Chicago, targeting the transformation of blighted communities. Funding continues under President Richard Nixon, with whom McKissick forms an unlikely political alliance. All told, McKissick Enterprises raises $31 million in federal grants, contracts, and loan guarantees. 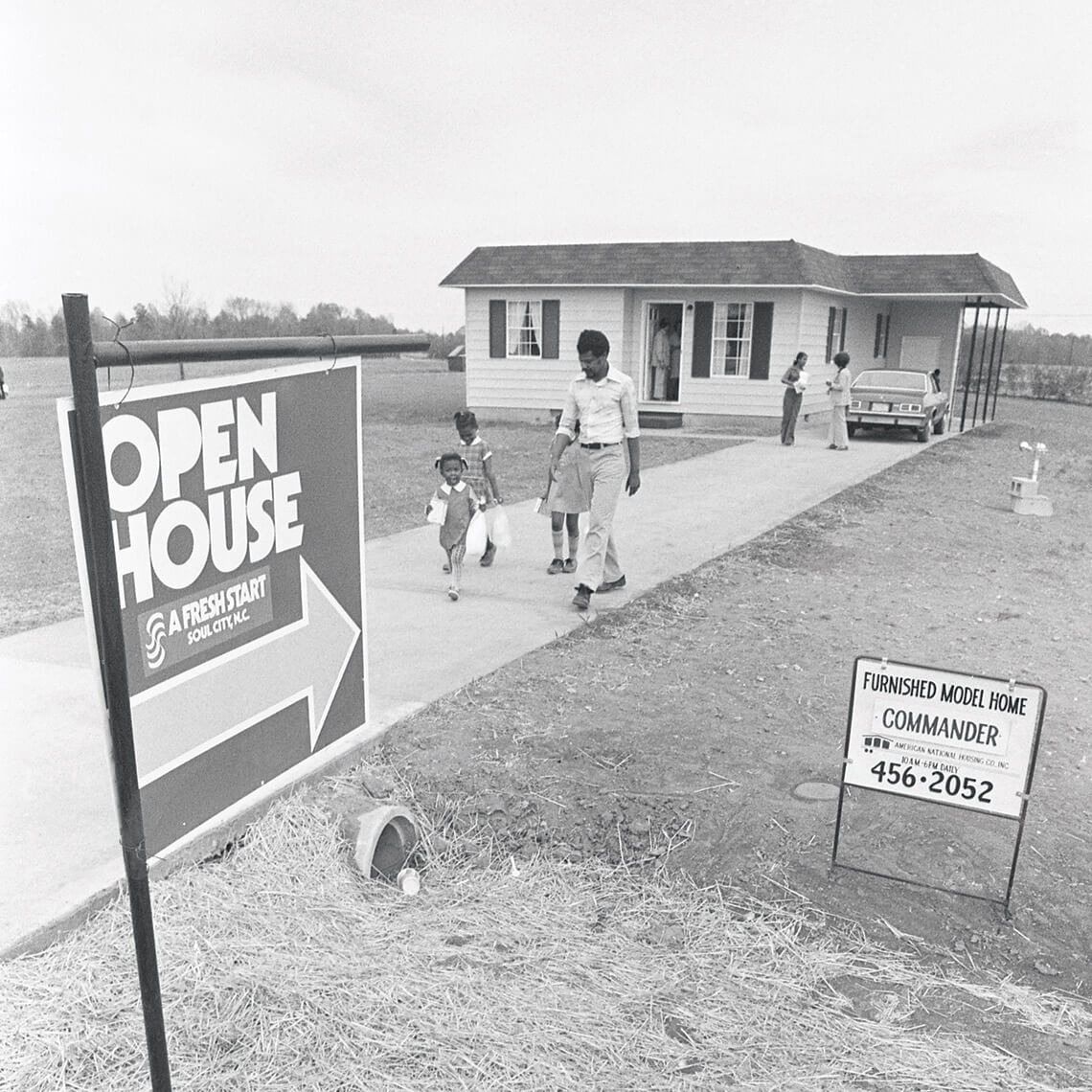 Gov. James E. Holshouser presides over the ground-breaking on November 9, 1973. “This land we stand on today was once the site of a plantation that depended on the labor of slaves,” he tells the audience. He finishes with an endorsement of McKissick’s daring idea: “Let Soul City be a lesson for all of us that man can go as far as his dreams take him, so long as he is willing to make those dreams come true.”

The first phase indeed looks promising. The Black architectural firm of Ifill Johnson Hanchard helps McKissick turn his dream into reality, building Soultech I, an enormous steel, glass, and concrete complex with 40,000 square feet of manufacturing space and 12,000 square feet of offices. They add a health clinic and lay out a network of streets for a neighborhood, all to be served by a new water plant. McKissick relocates from New York to a trailer parked next to a cornfield near the site and eventually builds a spacious new home in Soul City.

McKissick makes it clear from the start that Soul City is to be a multiracial enterprise. “If it succeeded as an all- Black town, it would be defeating my objectives,” he insists. “Because I believe that the force of the new town concept is a strong sociopolitical-economic force that deals with every imaginable problem that we have in American society … and we can bring together industry, government, and educational resources to really build the town free of racism.”

Yet the name itself becomes a roadblock for some white would-be investors, who assume it describes an all-Black city. Despite savvy marketing, Soul City fails to attract many residents. By the spring of 1975, with $5 million already sunk into the project, no industries have located there, so all of those new jobs haven’t yet materialized. Roads with names resonant of Black history — Frederick Douglass Street, Sojourner Truth Trail, Harriet Tubman Lane — have yet to be built. Critics call the federally funded HealthCo clinic, housed in two trailers, a scam.

The Raleigh News and Observer targets McKissick with allegations of mismanagement and corruption. The Wall Street Journal takes him to task for what it calls an extravagant lifestyle, and Senator Jesse Helms — who has opposed taxpayer funding of the project from the start — adds his own strident criticism of Soul City, deriding it as a “massive wasteful boondoggle.” Representative L.H. Fountain joins Helms in calling for an audit.

The General Accounting Office shuts down the project for a year and a half to conduct an audit and — as with three other independent audits — finds no malfeasance. But the negative press doesn’t let up, and the damage is fatal to the enterprise. In 1979, the Department of Housing and Urban Development pulls Soul City’s funding — but finds no fault with McKissick. William J. White, a HUD administrator, says, simply, “The area itself just didn’t work out. There was not enough of a market to draw from.” There are only about 120 people living in Soul City — 105 Black and 15 white.

In the years following, Soul City becomes another small rural community organized around Green Duke Village, a residential development of neat, single-family homes, and a housing complex. McKissick continues his civil rights work and is appointed judge of the Ninth District Court in 1990. He becomes pastor of First Baptist Church in Soul City, where he resides until his untimely death at age 69.

Could Soul City have been more? The dream was always a long shot, one that required every bit of luck and support it could muster across a race barrier that proved insurmountable. Combined with the lack of industry and the energy crisis that ruined many sturdier businesses, it couldn’t survive the attacks of major newspapers and powerful politicians.

But none of that detracts from the nobility of McKissick’s vision to establish a community of true racial equality, unburdened by the poverty of either opportunity or tolerance.

Coming in January: The 1980s: A decade of local heroes.