The Richmond County clerk refuses to register Henry Ell Frye to vote. He says that Frye failed to pass the required literacy test.

Frustrated, Frye leaves the clerk’s office. It’s August 25, 1956, and later that same day, he will marry Shirley Taylor, his sweetheart from his A&T days, when he lived in a converted Army barracks and earned enough to pay the $400 annual tuition by delivering newspapers and working as a porter at the Sternberger Hospital for Women and Children.

Maybe this is the moment that crystallizes his passion for equal justice. Or maybe it really coalesces the following summer, when he listens to the Rev. Dr. Martin Luther King Jr. deliver an inspiring sermon at the Dexter Avenue Baptist Church in Montgomery, Alabama. Afterward, he shakes King’s hand, and they speak for a few moments. Frye calls his wife, Shirley, away at graduate school in Syracuse, New York: “You won’t believe who I talked to today!”

As a biology major with a minor in chemistry, Frye entertains notions of becoming a pharmacist or a dentist — he disdains lawyers. “Growing up in Ellerbe,” he tells an interviewer decades later, “… I just got the wrong impression, I suppose, that most of them were very terrible people whose job it was, as a lot of folks said around there, was to lie people out of trouble.” Then he meets a lawyer in Japan who spends his weekends teaching prisoners in the stockade to read and write. “This just sort of shocked me,” Frye remembers. “… All the rest of us were going out having fun, and this guy was spending his free time doing this.”

After the Air Force, contemplating law school, Frye asks the advice of local attorneys. “They said, ‘Well, suppose you go to law school. What are you going to do when you get out? Do you have anyone in your family who is in business or anything?’ I said, ‘No.’ ‘Anybody in your family who is in law?’ I said, ‘No, nothing like that.’” Then he consults J. Kenneth Lee, a pioneering civil rights attorney and entrepreneur in Greensboro, who tells him, “Don’t pay attention to that stuff. You go down and you do well, and you’ll be all right.”

While studying law at UNC, Frye returns to his hometown so that he can register to vote — this time with a different clerk. He passes the bar exam but then is summoned before the executive director of the state bar association, an imperious man reputed to be hostile to Black people — on his office wall hangs a Confederate battle flag — who will pass judgment on Frye’s character and moral fitness to join the bar. The man grills Frye on his association with the NAACP and delays his law license for months. At last, Frye sets up his practice in the Benbow Professional Building — adjacent to Lee’s office. The two become friends and collaborators.

But in the beginning, it’s hard to attract clients and pay the bills. Many Black clients assume that they will receive fairer treatment from a judge if they are represented by a white attorney. And most local Black-owned businesses are too small to generate much legal work. 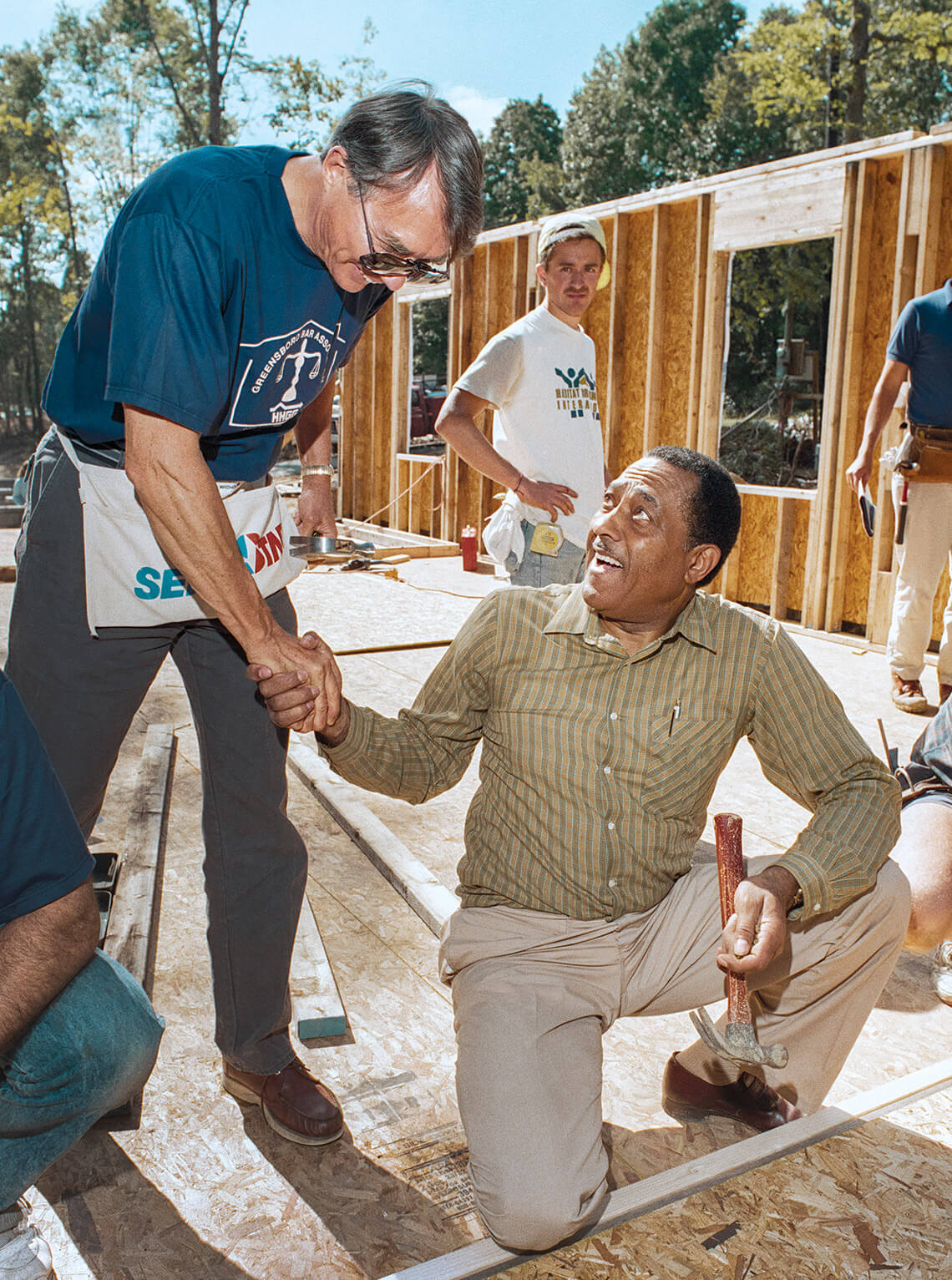 In 1991, Frye and Jim Exum (left), then the chief justice of the state Supreme Court, worked on a Habitat for Humanity home in Greensboro. photograph by Jerry Wolford

Still, he perseveres, with Lee’s guidance. Frye’s professional habit is to learn all he can from anyone who can teach him, to listen rather than orate. He is focused not on making a point but on making a difference.

In one of his early cases, Frye represents cafeteria workers at UNC Greensboro who are striking for better wages and working conditions. The university maintains that the workers are hired by a private contractor — who remains intractable to the workers’ demands — and refuses to enter negotiations. Frye quietly convinces UNCG administrators to join the talks and settle the strike fairly, and, in the end, the workers are satisfied.

“When people who are interested in doing the right thing come together and can make a difference, it can encourage others to do likewise,” he explains to a media outlet decades later.

Even as a young lieutenant, rakishly handsome in his crisp uniform and pencil-line mustache, Frye learned to keep his eyes on the prize. At his duty station south of Seoul, he assumed responsibility for an ammunition dump of 500- and 1,000-pound bombs. He outranked the experienced white warrant officer who had been in charge, and conflict seemed inevitable. Instead, Frye took a more thoughtful approach. “I had a whole lot of book learning, but I didn’t know anything,” he recalls. “I said, ‘I want you to keep on running it, just like you have been doing, but … I want to meet with you in the morning before you start and again in the afternoon, and I want you to teach me everything you know about this.’” Thus he learned his job from an expert, and that expert became a reliable ally in helping him succeed.

Frye calls his lawyerly ethic “a little old-fashioned,” believing that “you’re working not just for the pay; you’re working because you want to perform a service.”

Taking a two-year hiatus from private practice in 1963, Frye serves as assistant U.S. attorney for the Middle District of North Carolina, then teaches for two years as an adjunct law professor at North Carolina Central University.

Though not a flashy or charismatic personality, at a moment when African Americans are at last asserting their long-suppressed rights, Frye’s steadiness, focus, and ability to bring together divided factions into meaningful compromise turn out to be exactly the right attributes for elected office. It has been nearly a century since a Black politician has been elected to the legislature. In 1968, Henry Frye is elected to the North Carolina House of Representatives, where he serves until moving on to the State Senate in 1981.

His professional habit is to listen rather than orate. He focuses not on making a point but on making a difference.

His first goal is to abolish the literacy test for voting. One legislator maintains that the law has nothing whatsoever to do with race. “When he finished, I explained on the floor of the House very clearly that it did have a whole lot to do with race, that that really was the primary reason for it being there in the first place, and gave my own personal example to prove it,” Frye recalls. He wins the vote.

Then, one evening in late January 1983, comes a phone call from Gov. James B. Hunt Jr. offering the appointment of a lifetime: associate justice of the North Carolina Supreme Court.

Frye has been contemplating a run for secretary of state or even governor. “I really had no interest in being on the Supreme Court,” he confides later, “but it was sort of like the U.S. attorney situation. It was the kind of thing that you just couldn’t turn down.” 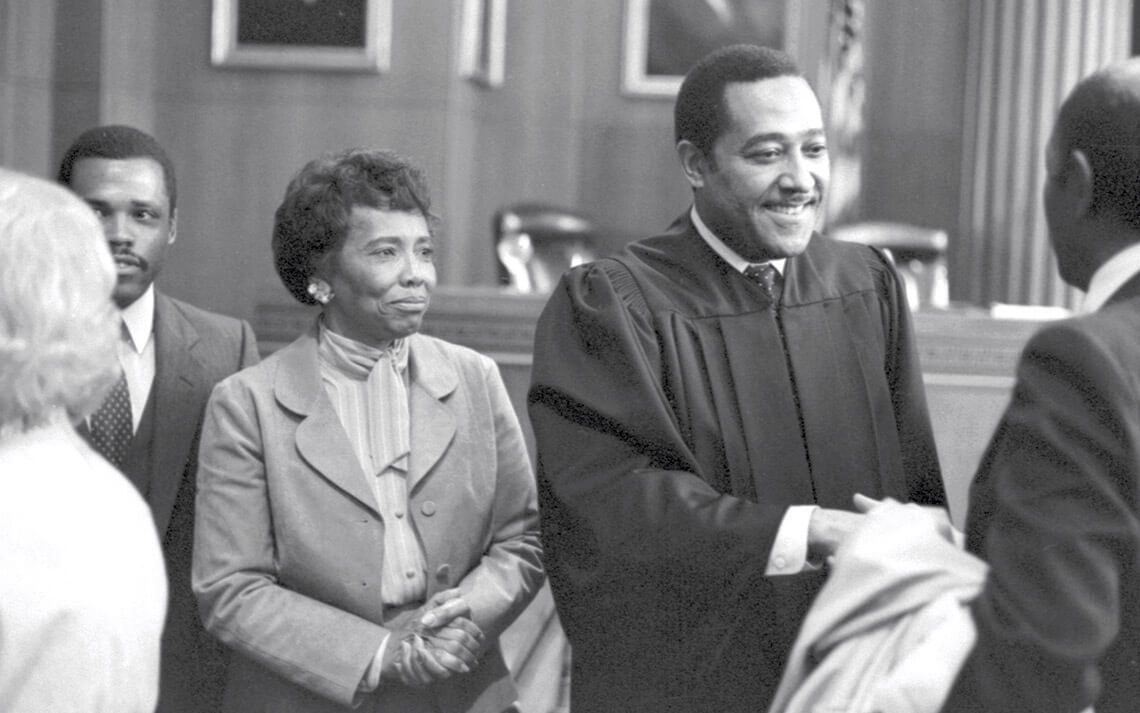 With his wife, Shirley, by his side, Frye was sworn in as a justice on the North Carolina Supreme Court during a ceremony on February 3, 1983. Photography courtesy of The News & Observer collection, courtesy of the state archives of north carolina

“I had been practicing law for over 20 years,” he recalls. “I had served in the legislature in the House for 12 years, the Senate for two years. I had served on almost every committee in the legislature, and I had been a prosecutor in the federal system, assistant prosecutor — actually assistant U.S. attorney — and so, I don’t think there was any question at all about my qualifications for the court.”

His tenure is marked by his habits of asking questions, conducting careful research, reflecting deeply, and deliberating congenially with his fellow justices. “When I go into the oral argument, I’ve already read a lot about the case,” he explains. “And usually there are two or three things that I have some doubt about.” The process takes time and patience. “We feel generally that it’s better to be right than to rush an opinion and make a mistake.”

In his very first session on the court, he takes on Meiselman v. Meiselman, an extremely complex case defining the rights of minority shareholders in a closely held corporation. The statute is inadequate to cover the circumstances, so Frye bridges the gap in the law with a decision that is quickly hailed as a landmark opinion and becomes a standard case study in law schools.

During 18 years on the court, he authors 347 decisions and 75 dissents, but his exhaustive preparation and quiet power of persuasion magnify his presence. “What you don’t know, and you can’t gauge, was his influence on the decisions written by the other justices,” says U.S. Appeals Court Judge James A. Wynn Jr., another pioneering African American jurist. “I can tell you that at times it was enormous.”

Frye doesn’t win all of his battles, but, ever a pragmatic optimist, he never stops fighting for the disenfranchised and the disadvantaged.

After his elevation to the high court, Frye tells an interviewer, “With the right leadership, North Carolina should go into the 21st century as a more progressive state.” He continues, “I would like to see North Carolina live up to its motto, ‘To be rather than to seem,’ and … to do a better job of being fair and open in everything …”

Coming in March: Michael Jordan bursts onto the scene.