War is the great disrupter of populations. Ruined by its devastation, traumatized by its violence, people take the biggest gamble of their lives: They leave home and strike out for the unknown, with all of its opportunities and dangers. Some historians surmise that this sense of daring is the steel in America’s backbone.

North Carolina has a long tradition of receiving such immigrants, not just the war-weary but also those seeking freedom from persecution or a better life for their children: the Waldenses, persecuted by the Catholic Church in their Alpine home, who established Valdese in Burke County; Jews escaping the horrors of World War II, who settled in the old Dutch farming community of Van Eeden; Latin Americans, who became the essential workforce of the state’s agricultural industries.

Just before the fall of Saigon in April 1975, President Gerald Ford agreed to accept 125,000 refugees from Vietnam. By 1980, about 2,400 of them have settled in North Carolina, and more arrive in a second wave — fishermen, merchants, and farmers. Among the newcomers are highland people called Hmong, who migrated from southern China to Laos, Vietnam, Burma, and Thailand in the 1800s. During the Vietnam War, many fought in the so-called “Secret Army” — choking off the Ho Chi Minh Trail, a crucial supply route for North Vietnamese forces, and rescuing American flyers shot down over the jungle. Now, they make their way overland from Laos through Thailand, then to the United States — and some 2,000 of them to North Carolina. 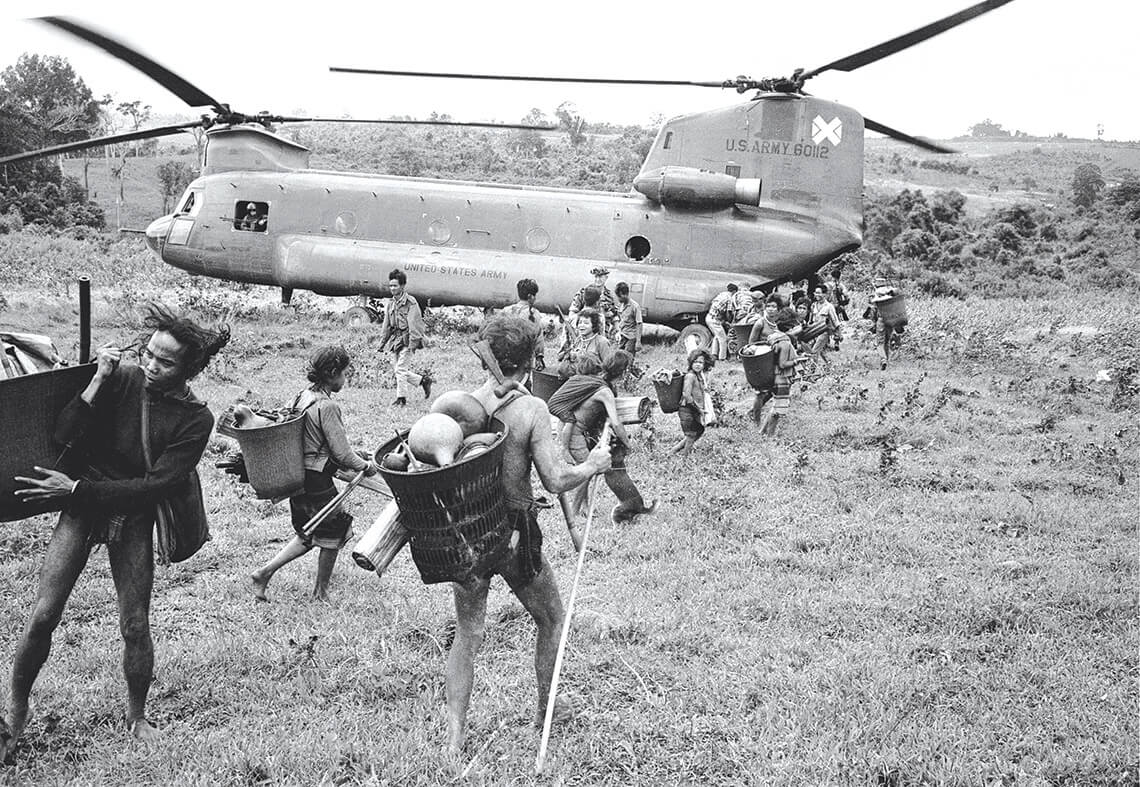 In September 1968, U.S. Army helicopters transported members of the Montagnard nation to a refugee camp during the Vietnam War. Many Montagnards later settled in North Carolina. photograph by ASSOCIATED PRESS/HENRI HUET

The Montagnards, from the Central Highlands of Vietnam, consider themselves a separate nation. Also staunch allies of the Americans, they suffer for their loyalty. As many as 200,000 of them died during the fighting, some 85 percent of their villages razed. The end of the war brought retribution from the Hanoi government — imprisonment for many and the suppression of their culture. Montagnards, too, seek refuge in North Carolina. Before long, Greensboro has the largest Montagnard community in the world beyond Vietnam.

One of them, Blic Dacat, languishes in a Thai refugee camp until an American relief organization offers him the prospect of resettlement in either California or North Carolina. He knows which state is home to his Green Beret comrades. And the forested Piedmont where he finds a new home is familiar terrain — so like the Central Highlands that, during the Vietnam era, Special Forces trained in Randolph County before deployment.

George Clark, a Special Forces veteran and member of the VFW Post 1957 in Hickory, fought alongside some of the 60,000 Montagnard troops. “The Montagnards were the best warriors in the world,” he tells VFW Magazine. “They were so loyal. Through their courage, they gave us courage.”

The journey of immigration is often long and dangerous. Refugees can wait for months or even years in a transient camp before being offered safe passage to the U.S. Thomas Y Tlur Eban, an interpreter for U.S. Special Forces, treks across Cambodia to Thailand and finds refuge in Greensboro in 1986. But it is seven years before he is reunited with his wife, H Ju Nie. Shortly thereafter, two other Montagnards complete the journey: When Y Luanh Puih is released from prison in Vietnam, he and his wife, H Ngach Rahlan, move to the U.S. and join the Greensboro community.

Nie and Rahlan practice the art of backstrap weaving. They create exquisite blankets, shirts, baby carriers, and vibrant, colorful clothing, crafted to be worn on ceremonial or celebratory occasions. Nie was tutored in weaving from the age of 15 by her mother and other women in the city of Ban Ma Thuot. Her intricate geometric patterns depict images of the natural world, like reptiles and birds, as well as emblems of struggle, like rifles and airplanes. Rahlan’s specialty is described by the North Carolina Arts Council as “a now-rare twining technique called kteh, used as a border for a Rhadé man’s shirt or a Jarai woman’s skirt.”

These Montagnard women and others enrich their new community and preserve a cultural legacy that is becoming rare in their homeland, the chain of tradition broken by war, persecution, and the flight of refugees. Nie and Rahlan earn recognition in the form of the North Carolina Heritage Award, the state’s highest honor for traditional artists. 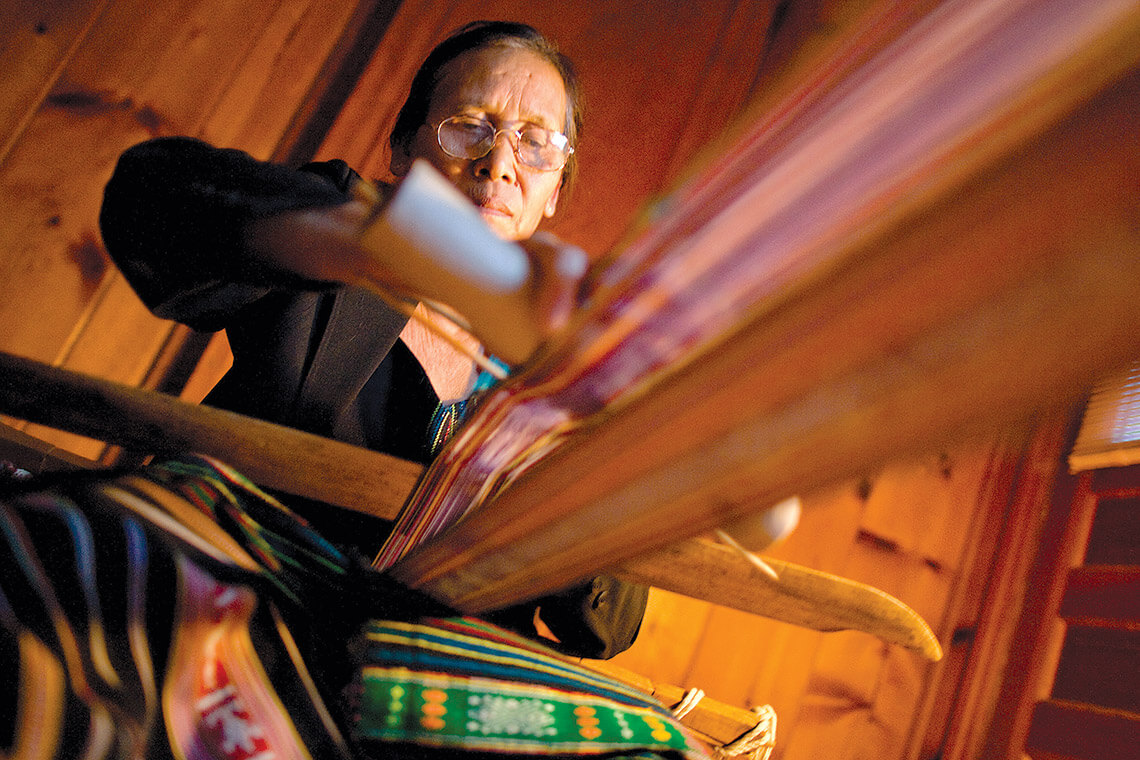 Before she died in 2021, H Ju Nie’s talent for backstrap weaving helped keep the Montagnard tradition alive. On a loom built by her husband, Nie designed intricate blankets, clothing, baby carriers, and bags — each a work of art. photograph by Jerry Wolford

Newcomers also bring economic value to the larger community as entrepreneurs. At age 14, Sai Kham, a Laotian, receives an offer from his uncle, who had immigrated to Charlotte. Kham relates his story to the North Carolina Justice Center: “He asked me, ‘Do you want to come to America?’ I said, ‘If you can bring me, I will come.’” Kham is excited but naïve. “I think America is just like in the movies,” he recounts. “They are going to have everything for you.” He gives away almost everything he owns, keeping only the clothes on his back and an English dictionary.

He comes to Charlotte in August 1987. After three months, he drops out of school to work and soon opens a restaurant, Pho Daravan, offering Thai and Laotian cuisine. The hours are long, but he enjoys the freedom. “You work hard … but nobody can tell you what time you have to be there.”

He continues, “War and war and war. I hate that. I been through that when I was a kid, you know? That’s why I come over here. You are living in a good land.”

Kham operates Pho Daravan until a few years before his death in 2019.

Charlotte, the Triad, and the Triangle emerge as gateways for immigrants. Beginning in 1980 and spanning the next two decades, they collectively increase their foreign-born newcomer population by an average of 600 percent or more.

By 1990, thousands of newcomers from Vietnam, Cambodia, Thailand, and Laos call North Carolina home, along with a fast-growing community of Indian Americans. Sheetal Desai’s journey of immigration lasts for 12 years. Her parents left India in 1971 for Zambia, a stepping-stone to the U.S. “The idea was always to move to the West, because [my father] wanted a better life for us,” Desai says. She was born and grew up in Zambia, then moved with her family to Saint Lucia and Barbados. “We were in Barbados when we got the call for our green card,” she says.

Her family first moves to chilly Massachusetts. “We lasted 10 months, and we were miserable,” she recounts. A family friend from North Carolina invites them to visit. “Flying over, I see all the trees, and I’m thinking to myself, Yes, this is my place.”

She settles in Durham, then marries a native North Carolinian of Indian descent and becomes Sheetal Desai-Maheshwary. “That’s when I really felt, This is home. I’m home,” she says. “Before that, I was trying to straddle the two cultures. So him having been brought up here kind of helped me find my place.”

With a degree in mass communication from NC State, she eventually lands a position as project coordinator for a clinical supplies company. “I love it. This is the closest I will ever get to helping a patient without having a medical degree,” she says. “What I do directly affects a cancer patient, a child with leukemia. I like knowing that what I am doing is making a difference to someone.”

She offers this advice for newcomers: “Set aside any preconceived notions that you may have had. Wipe your slate clean and just absorb everyone around you. This country has so much to give — so much freedom, so much acceptance, especially here in North Carolina.”

Like generations before them, these immigrants weave themselves into their new communities, making them stronger and more vibrant — contributing their arts and traditions, their ingenuity and ambition, their hard work and loyalty to their adopted home.

Coming in June: Saving the birds of the North Carolina coast.