On March 2, 1980 — as if to erase the tumult of the 1970s — the “Snowstorm of the Century” sweeps across the state. Near-blizzard conditions prevail on the Coastal Plain, with local accumulations between a foot and 30 inches. Travel stalls as residents dig out and tally the toll in property damage and deaths.

In the coming decade, a parade of local heroes steps up to accomplish extraordinary things across the state. Henry Frye, a native of Richmond County, becomes a captain in the U.S. Air Force after graduating from the Agricultural and Technical College of North Carolina — but when he tries to vote, he faces an onerous “literacy test” designed to disenfranchise Black citizens. Undeterred, he follows civil rights activist Floyd McKissick’s path to UNC Law School, becoming the first Black student to enroll for the entire three years of study.

Frye goes on to make history as the first African American elected to the General Assembly since 1900, when the Democrats effectively shut down voting rights for Black citizens. He serves from 1968 until 1980, then is elected to the state senate and, in 1983, is appointed to the state supreme court. He rises to become chief justice — the first African American to occupy the highest judicial post in North Carolina. 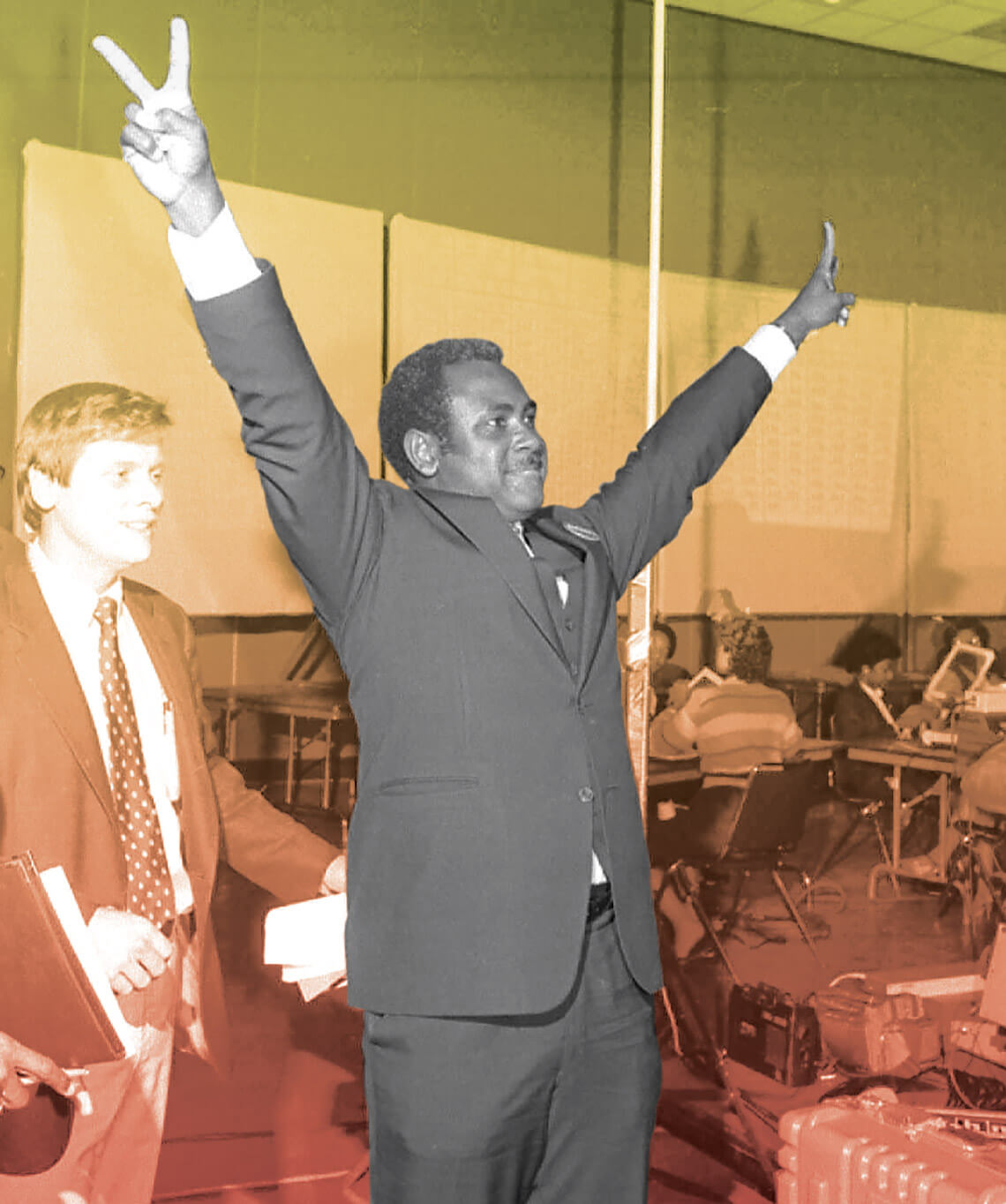 Architect and politician Harvey Gantt helped forge a future for Charlotte as a model of the New South — especially after he became the city’s first Black mayor in 1983. Photography courtesy of THE CHARLOTTE OBSERVER COLLECTION, ROBINSON-SPANGLER CAROLINA ROOM, CHARLOTTE-MECKLENBURG LIBRARY

Harvey B. Gantt is another young Black man who won’t take no for an answer. Having grown up in segregated Charleston, South Carolina, he studies architecture at Iowa State University, then applies to Clemson Agricultural College — an all-white institution that denies him admission. His lawsuit reaches the U.S. Fourth Circuit Court of Appeals, which rules in his favor, and in 1963, he becomes the first to break that color barrier.

Gantt augments his architecture degree from Clemson with a master’s degree in city planning from the Massachusetts Institute of Technology and sets up shop in Charlotte. His firm takes on challenging large-scale commissions, with the aim of using architecture to help create a sense of community. Gantt and his associates design many of the signature projects that form the modern identity of downtown Charlotte: Friendship Missionary Baptist Church, the Johnson C. Smith University Science Center, the Charlotte Transportation Center, ImaginOn, and TransAmerica Square.

In 1983, after serving for nine years on the city council, Gantt becomes Charlotte’s first Black mayor — a position he holds for two terms. He guides the city to reimagine itself as a model of the New South.

Like Charlotte, Asheville needs to reinvent itself. Too many of the beautiful Art Deco buildings downtown, a legacy of the 1920s boom, have suffered neglect in the decades since — the Great Depression, the loss of manufacturing and timber industries, the stagflation of the 1970s. A huge suburban mall has forced many local businesses to close.

J. Patrick Whalen, a longtime resident and cofounder of Public Interest Projects, later recalls to The Atlantic the sense that many in Asheville have given up on the future, and that new ideas will be met with a typical refrain: “That will never work here — don’t even try.” 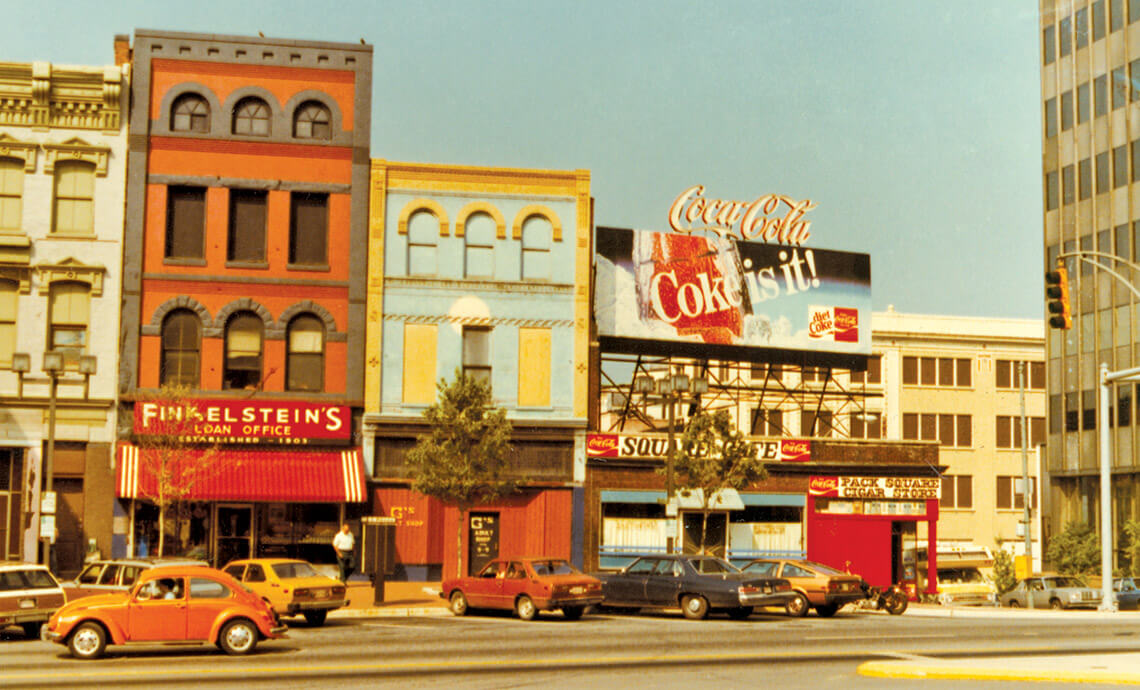 City officials float a plan to raze 11 blocks of the old downtown and build another enclosed mall. John Lantzius is among the first to resist such demolition. He and his sister Dawn are deeply engaged in renovating old properties. Wayne Caldwell, a businessman and writer, and Roger McGuire, a former advertising executive, also share a vision of Asheville’s future that doesn’t include bulldozing the historic downtown core. Whalen partners with Julian Price, who invests $15 million in Asheville’s downtown. A new creative economy burgeons, attracting artists and musicians.

Other North Carolinians reach for glory in a variety of ways. As a high school sophomore in Wilmington, Michael Jordan didn’t make the varsity basketball team — not tall enough, according to his coach, Clifton “Pop” Herring — but he persevered, making the varsity squad as a junior. He begins the decade playing for UNC Chapel Hill, and in the McDonald’s All American Game scores 30 points — a record. One year later, he sinks the game-winning basket against Georgetown to lead his team to the NCAA Championship. 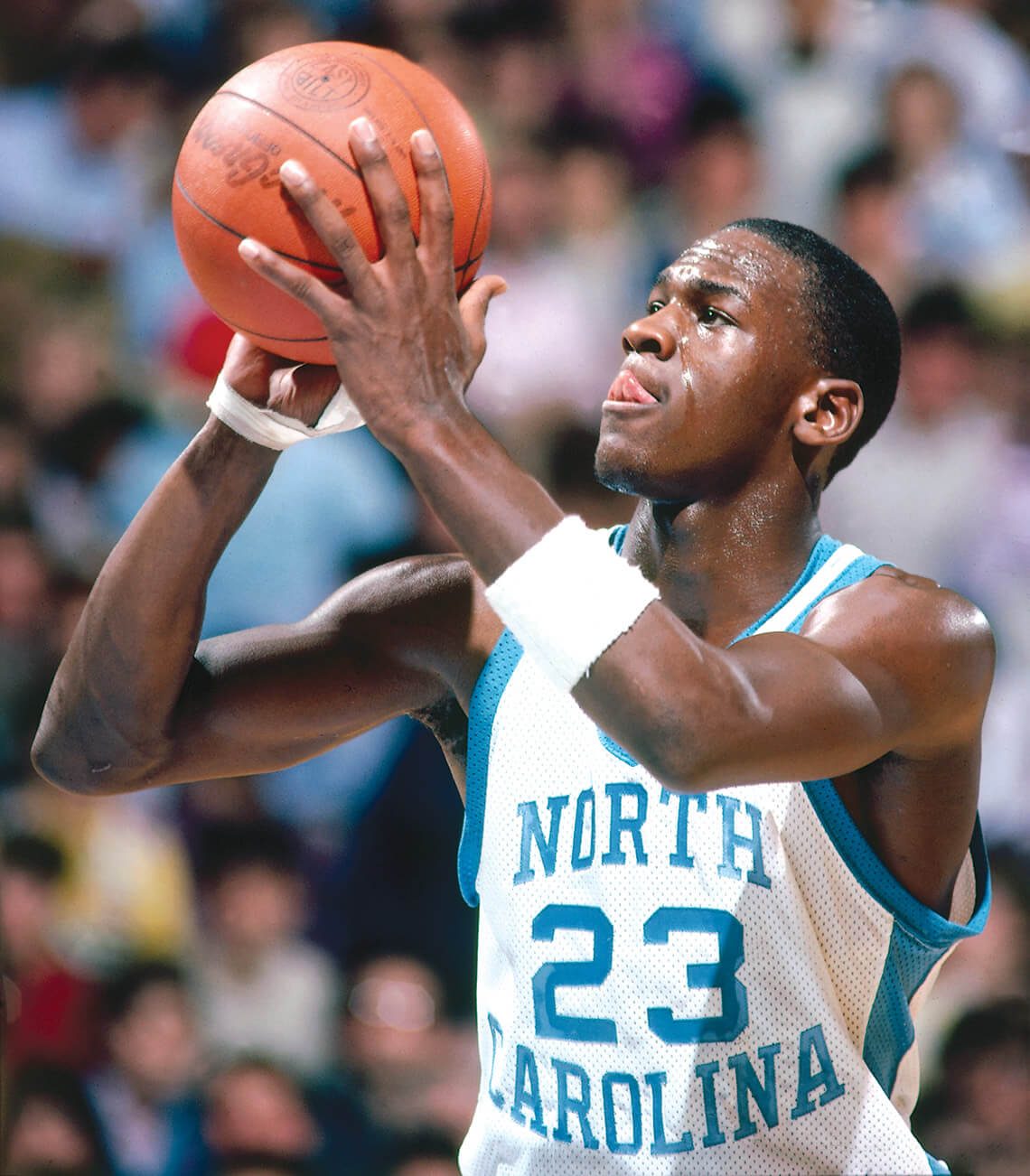 In 1984, he turns pro, but before joining the Chicago Bulls, he scores 137 points in eight games at the Los Angeles Summer Olympics, including 20 points in a final game against Spain for the gold medal. He soon establishes himself as the premier player in the NBA.

At the Burroughs Wellcome laboratory in Research Triangle Park, a team of scientists uses a novel approach to cure illness. Gertrude B. Elion and George H. Hitchings abandon the trial-and-error method of testing chemicals against diseases and instead design their own chemicals specifically engineered to attack malignant cells.

Their collaborative effort leads to treatments for leukemia, malaria, and meningitis, among other maladies. In 1988, they, along with Sir James W. Black of the United Kingdom, are awarded the Nobel Prize in Physiology or Medicine. In his acceptance speech, Hitchings cites William Faulkner’s “verities of the human heart.” He declares, “As a scientist, I should like to suggest three verities of the human mind — curiosity, creativity, and the love of knowledge.”

Michael J. Smith, a native of Beaufort, attends the U.S. Naval Academy, then earns a master’s degree in aeronautical engineering. As a naval aviator, he deploys to Vietnam, piloting A-6 Intruders in combat. He serves two more tours of duty aboard the USS Saratoga and logs nearly 5,000 flying hours in 28 types of aircraft. His final challenge is space flight. He joins NASA’s astronaut program in 1980, where he is selected to pilot the space shuttle Challenger, slated for a fall 1986 launch. It is to be his first and last space mission. Also aboard Challenger is Dr. Ronald E. McNair, a graduate of North Carolina A&T and an expert in laser physics. McNair, the mission specialist, has one successful space shuttle mission under his belt: Aboard Challenger in 1984, he became the second African American to launch into space and the first person to play music there, on his saxophone.

The flight ends in one of the most widely televised calamities in history and results in deep soul-searching at the space agency: It is the first time NASA has ever lost astronauts on a mission.

The war that took Captain Smith halfway around the world has brought thousands of newcomers to the state. After the fall of Saigon in 1975, some 2,400 of about 125,000 Vietnamese refugees chose to settle in North Carolina, and a second wave brings more in the 1980s. In addition, about 2,000 Hmong from the mountainous regions of Laos have formed a thriving community in Greensboro.

For generations before emancipation, Somerset Place plantation in Washington County was home to more than 850 enslaved people. In 1986, Dorothy Spruill Redford, whose ancestors worked Somerset Place, organizes the “Somerset Homecoming.” Nearly 2,000 descendants throng the grounds for a feast of chitterlings and corn pone and music energized by the beat of African drums, as they swap stories and parse familial connections. Redford becomes site interpreter of Somerset Place State Historic Site and carries on the tradition.

“In the beginning, when we were first brought to these shores against our wills, our strength was in our selves, in our bonds with one another,” she says. “Somewhere along the line, in complex and subtle ways, those selves were severed, the bonds broken. My journey, climaxed on this day, was a reunion in every sense of the word.”

On the coast, a flurry of development, water pollution, and pesticides threaten the nesting grounds of birds such as the brown pelican, white ibis, and blue and night herons. Dr. James F. Parnell, a biologist at UNC Wilmington, and a corps of graduate students establish two sanctuaries in the Cape Fear River estuary, on Battery and Striking islands. Soon, the two islands expand to a coast-wide network named in his honor: the Dr. James F. Parnell Colonial Waterbird Sanctuary System.

Just as snow ushered in the decade, a blizzard strikes the coast toward the end of 1989. Cape Hatteras records more than 13 inches of snowfall, and Wilmington sets an all-time record with 15 inches and a low temperature of zero degrees on Christmas morning — the first white Christmas in its history.