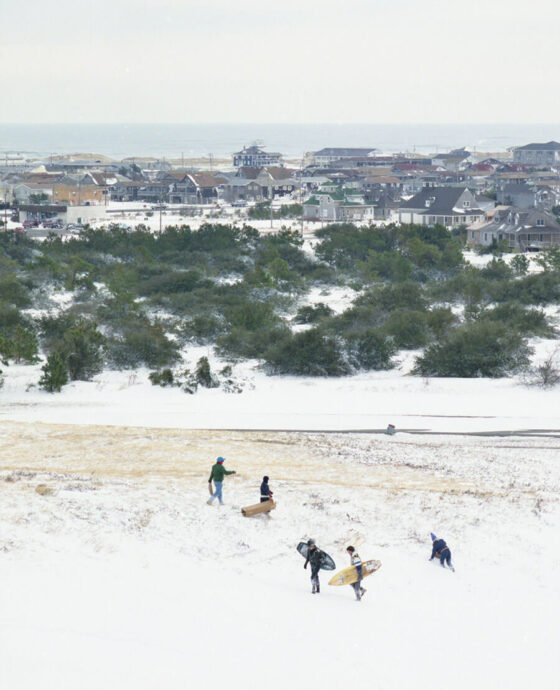 Two days before Christmas 1989, the largest snowstorm in its history envelops the North Carolina coast. It is a fitting close for a decade defined by superlatives — dedicated scientists achieving remarkable breakthroughs in medicine, resourceful social activists carving out victories over seemingly impossible odds, game-changing pioneers reaching historic milestones and winning international accolades. The state has seen a crowded calendar of firsts, bests, and mosts.

It’s as if nature is closing the brackets around such an extraordinary span of years, for 1980 was ushered in by another storm, what the National Weather Service called the “Snowstorm of the Century” — a coastal blizzard that dumped record amounts of snow on Morehead City (22 inches), Elizabeth City (25 inches), and Emerald Isle (30 inches). Wind gusts up to 62 miles per hour piled eight-foot drifts on Hatteras Island. 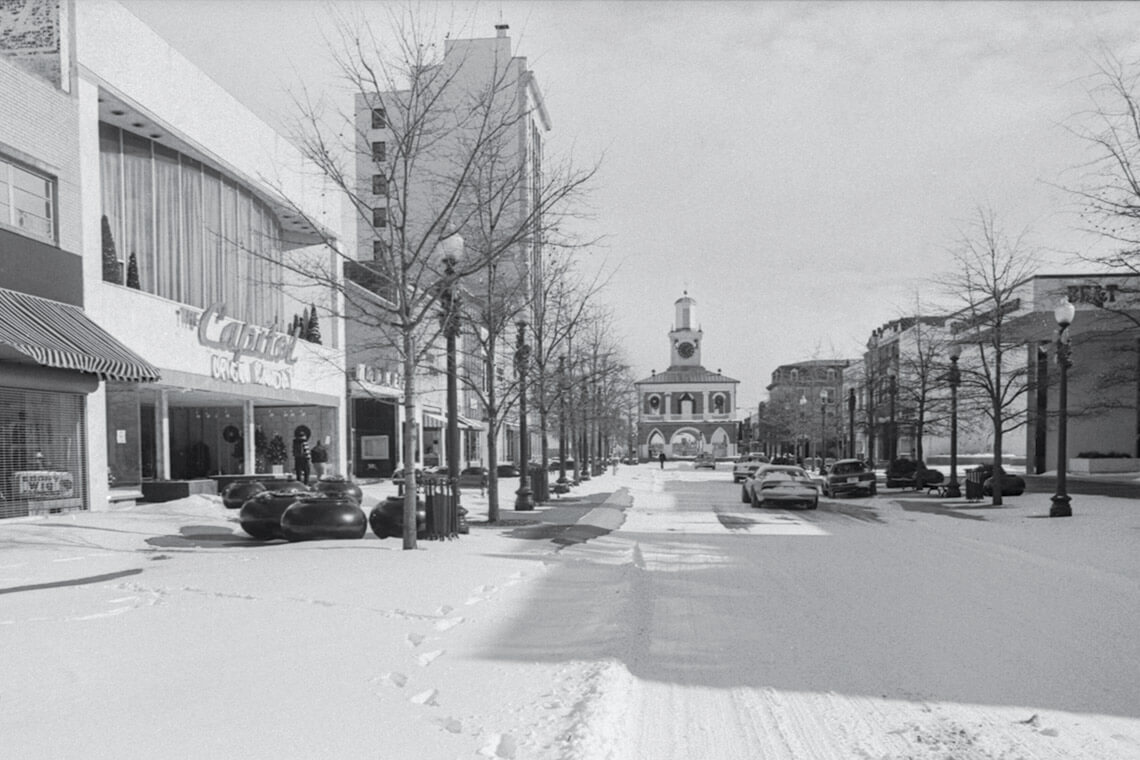 This new blizzard is massive, a coastal low-pressure system that forms on the east coast of Florida, fueled by an infusion of air from an Arctic high-pressure front blowing in from the Western and Central plains. It stretches from Florida to Virginia, adding its own superlatives to punctuate the turn of the decade.

“Snowfall totals of 15 inches at Wilmington, NC, and 13.3 inches at Cape Hatteras, NC, were all-time records for those locations,” the National Weather Service reports. “Gusty winds piled snow drifts four to eight feet high all along the coast. Many towns were paralyzed. The snow shattered many snow records for the coastal areas.”

Snow continues falling well into Christmas Eve. “It was the first White Christmas on record for coastal North Carolina,” the National Weather Service records. In Wilmington, as Christmas Day dawns, the thermometer dips to zero — another record. Southport hits a low of minus three degrees, Jacksonville minus five.

Many residents greet the unpredicted snowfall with glee — two kids in Fayetteville hitch their dog to a sled and hop aboard, and across the region, snowmen rise in front yards amid playful snowball fights. Many eastern North Carolina kids and adults alike experience snow for the first time. 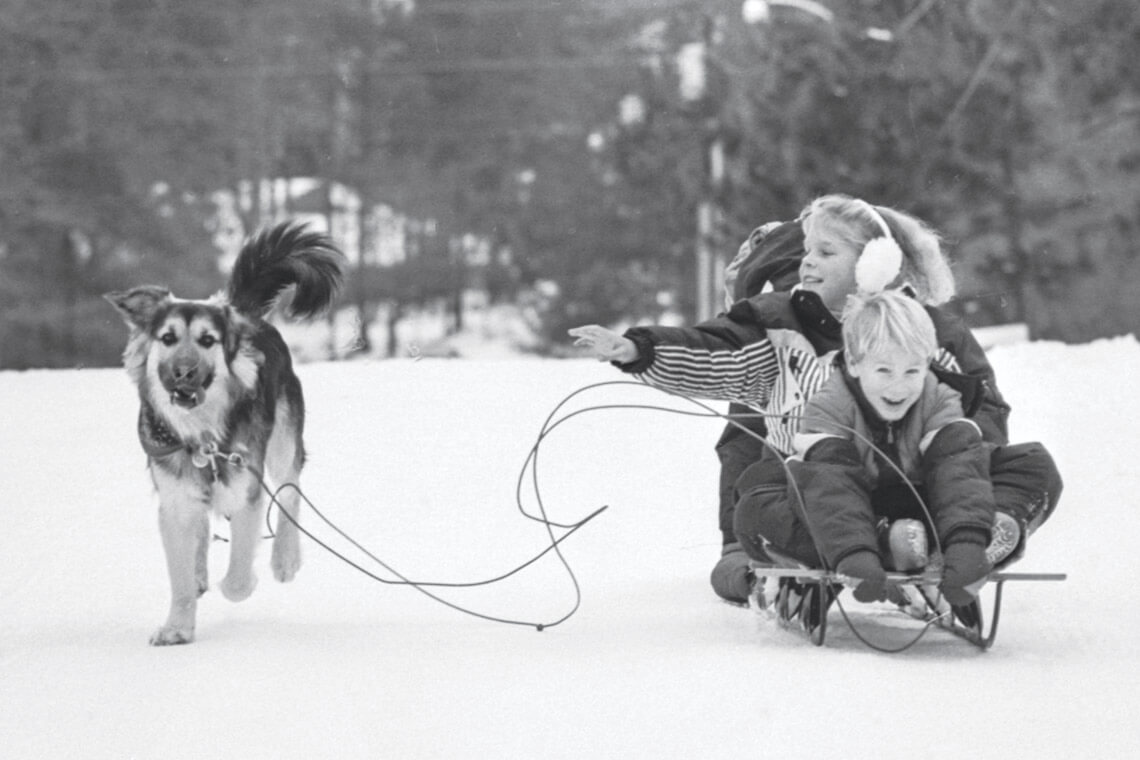 The blizzard of 1989 blanketed southeastern North Carolina, including Fayetteville, where Tyler, age 6, and Jennifer Blue, age 10, and their dog Max played in the snow on Christmas Day. photograph by CINDY BURNHAM/THE FAYETTEVILLE OBSERVER

In Wilmington, sixth graders Courtney Wells and Faison Gibson can’t get enough of the snow. “In Faison’s front yard on South Live Oak Parkway, the girls have built a castle with icicle turrets and a snow woman with a ‘Holiday Greetings’ apron,” reports the Wilmington Morning Star. “They’ve modified their boogie boards for snow surfing and even tried bicycling for awhile on Wednesday.”

“That was my first winter in Wilmington. I remember waking up and going outside thinking I was in a scene from Kubrick’s The Shining, about to wander into that snow-covered hedge maze,” says Jesse Waters, then a 19-year-old restaurant worker. “Nothing was happening. Nothing was moving. The stillness and the quiet spread themselves over everything, and the early morning light against the snow gave the town around me an almost animated, cartoonish field of white.”

The heavy snowfall brings problems as well as delight. Drivers are unaccustomed to slick roads clogged with drifts, and many coastal cities have no snowplows — though Wilmington fields three plows and two road graders in a vain effort to clear streets and bridges. But the 16 workers on duty encounter unforeseen snags, says Donna Freeman, who works for the Wilmington office of the state Department of Transportation: “They found out that salt isn’t working and the sand is making it slipperier.”

Bob Russell, a musician, is returning home from Atlanta on U.S. Highway 74/76 in Brunswick County when traffic comes to a standstill. “People were getting out of their cars, wondering why we were stopped,” he recalls. “Turns out that the DOT’s improvised ‘snowplow’ — a dump truck with a blade strapped on — had gotten stuck in the snow, blocking both lanes. We had to sit tight until they got the ‘snowplow’ out of the road!” 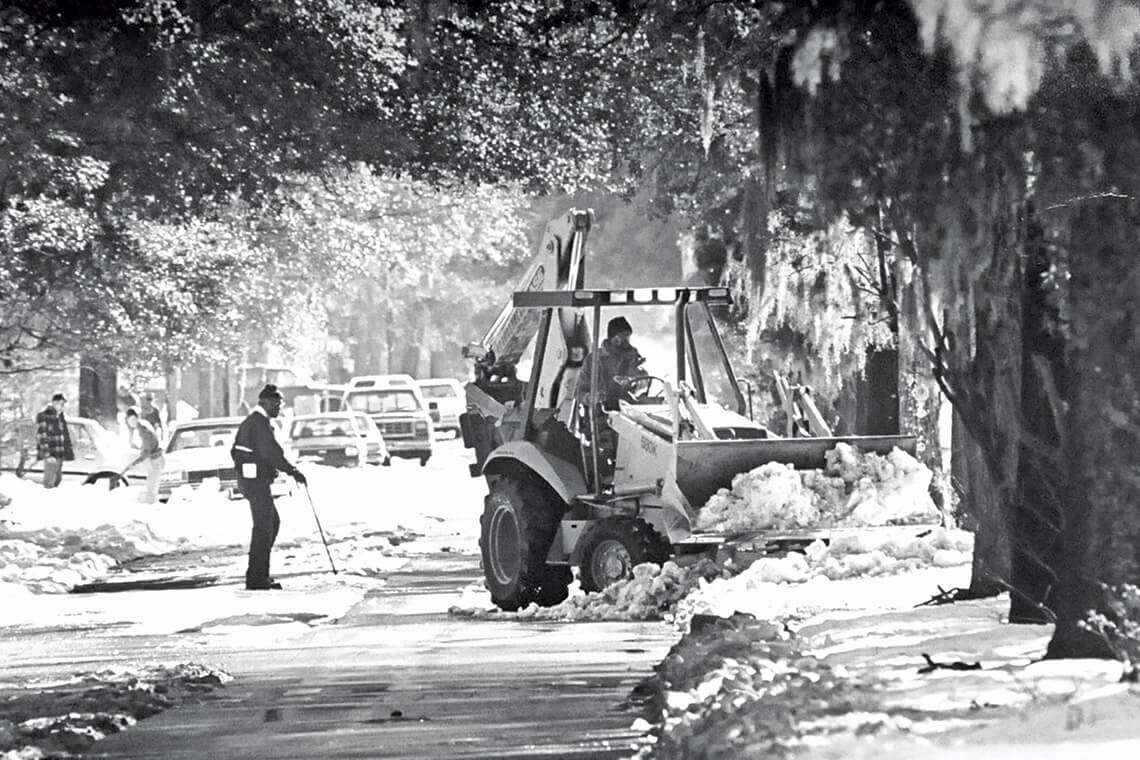 Tractors and other machinery typically used for moving dirt were conscripted into clearing the more than 15 inches of snow that fell on Wilmington. photograph by © STAR NEWS-USA TODAY NETWORK

In Wilmington, one man dies of a heart attack while shoveling snow, and in Camden County, an elderly man dies of hypothermia in a home that has no heat. Another ventures outside to get kerosene, slips into a snowbank, and freezes to death.

Two days after Christmas, the Wilmington City Council, called into an emergency session, declares a state of emergency: More than 300 frozen pipes have burst, draining eight million gallons per day from the municipal water reserve and dangerously depleting it. The decree cuts off water service to nonresidential and non-medical facilities for 48 hours. The Cape Fear Hotel apartments contend with their own burst pipes, which fill the basement with 50,000 gallons of frigid water.

Dargan Frierson Jr., a professor of mathematics at UNC Wilmington, remembers the storm vividly even though he and his wife are elsewhere visiting her parents when it hits: “We heard about the storm coming, called a friend here, and asked him to go into our kitchen and turn the faucets on to run with a fast drip … So the water pipes themselves didn’t freeze, but the drain pipe did. So all that dripping water overflowed into our kitchen and required a major rebuild.”

A newly hired colleague fares even worse, having turned off the heat when he and his wife left town for the holiday break. “As they drove up their driveway on returning home, they noticed the large, steady stream of water flowing out from under the garage doors,” Frierson says. “Every water pipe in the house had burst and run continuously — the entire interior of the house, both floors, was a total loss!”

But most residents weather the unusual storm safely, home for the holidays in communities that are virtually shut down. Michelle Manning drives home to Wilmington from Greensboro, thinking that the worst of the storm will miss the coast. “The hush of the city was strange and exciting,” she remembers. “It was if the whole world had been soundproofed.”

Susan Dillard, another Wilmington resident, has already worked a 12-hour shift at Water Street Baking on the riverfront when she goes outside and sees the extent of the blizzard. The bakery has many orders ready for Christmas pickup, but, she recalls, “I knew the orders wouldn’t be able to go out. I loaded everything into my car.” Her car can’t make it up the long, slippery hill, so instead, she drives to her Dock Street home. “Put the desserts into the snowpack on my front porch, called the customers,” she says. “Saved Christmas.”

Eventually, power returns, the snow and ice melt from the roads, and the mercury rises above freezing. The Wilmington Morning Star offers a Christmas Day benediction of the event that’s worthy of Charles Dickens: “On a day that celebrates miracles, look outside: a miracle … Wilmingtonians of nine decades have never seen deep snow at Christmas. None of us is likely to see it again.”

Sure, the snow ruined some holiday gatherings and ran up the electric bill. But the paper declares all those troubles to be simply humbug. “Haven’t the kids had a wonderful time? Haven’t you revelled at being cozy indoors? The inconvenience will soon melt away. The wonder will remain drifted in our memories the rest of our lives — the snowy Christmas of 1989. A miracle.”