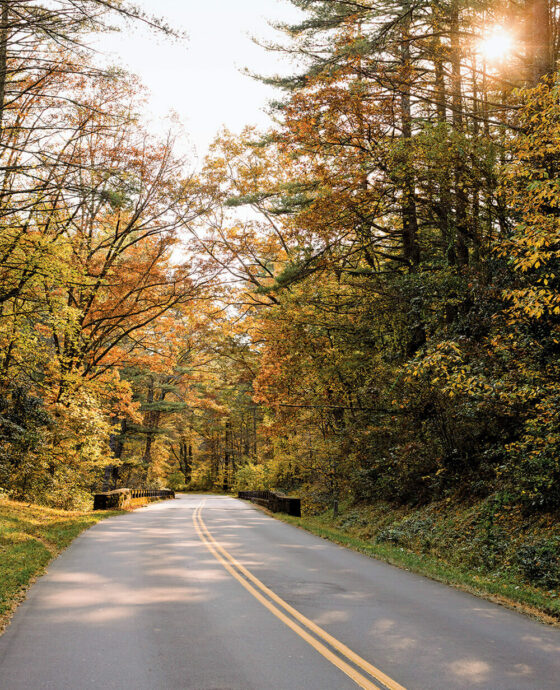 Rebecca Moxley was 17 years old when she predicted the future. It was 1908, and Moxley, married and pregnant, had a dream that she would die shortly after giving birth. She asked a local farmer, Pack Murphy, if she could be buried beneath her favorite apple tree on his land at Cumberland Knob, just south of the Virginia border. Murphy agreed, and Moxley died three days after her son was born.

Moxley may have predicted her own death, but she couldn’t have foreseen what would become of her final resting place. That it would become an integral piece of the most ambitious scenic road project to date. That the economy would collapse, and the road, which is now called the Blue Ridge Parkway, would be a way out of the Depression, putting locals to work and giving generations a destination to explore. She couldn’t have predicted that the automobile would become an obsession for those who could afford one, and that Patrick Murphy’s farm would one day be a recreation area where a new breed of tourists would hike, rest, and picnic — just feet from her grave.

The world was about to change when Rebecca Moxley passed away. There were no paved roads in her rural corner of North Carolina. Most farmers still depended on horses and oxen for travel. But Ford had just introduced the Model T, and in a few short decades, the federal government would see the popularity of cars and the demand for paved roads as a way to break rural families out of poverty. The Blue Ridge Parkway would be a massive economic stimulus project that would simultaneously preserve the culture of Southern Appalachia and give its people steady work. The project would take more than 50 years to complete, and it would begin on Cumberland Knob, near the spot where Rebecca Moxley was laid to rest.

The Blue Ridge Parkway is a two-lane highway that runs 469 miles, from the southern tip of Virginia’s Shenandoah National Park to the eastern edge of Great Smoky Mountains National Park in North Carolina. The road follows the ridgeline of six mountain chains, undulating between pastoral valleys and lofty peaks. There are no stop signs, no traffic lights, and few access roads.

Dubbed “America’s favorite drive,” the parkway was a behemoth of an undertaking and a constant presence in the young life of Carlton Abbott, whose father, Stanley, was the landscape architect charged with designing and constructing the national park. “This wasn’t just a road. It was three miles wide at places,” the younger Abbott says. “It has more border area than most countries in the world. It’s large and ambitious. It was the first time anything like this was ever done, and it’s still one of the few parkways of its scope in the entire world.” 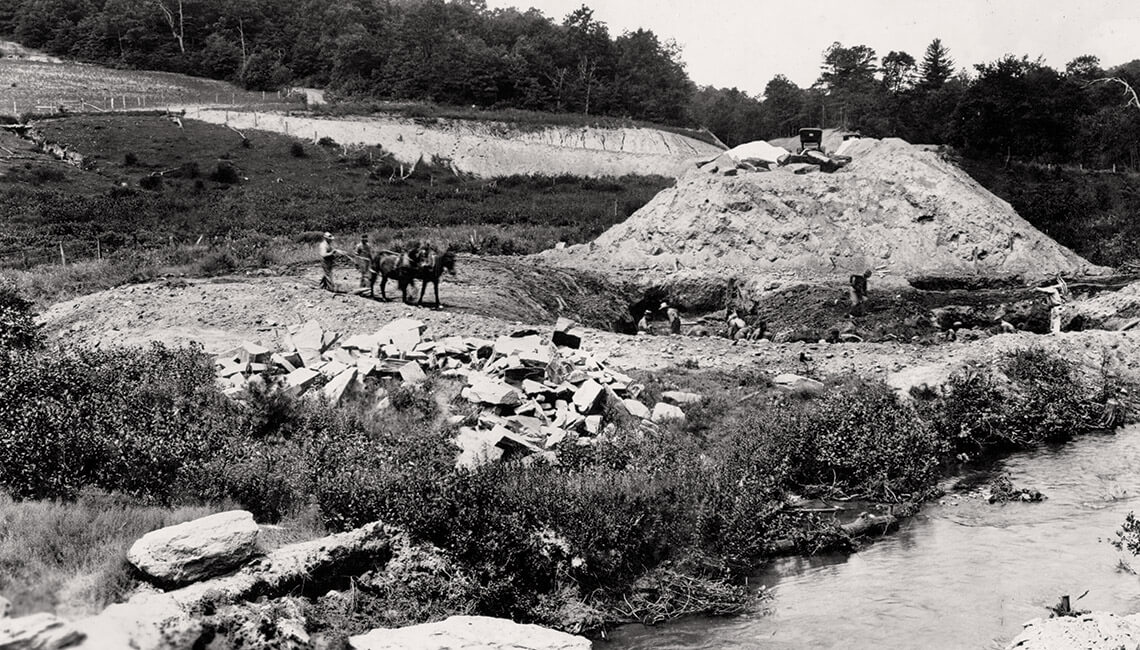 Thirty years before construction workers brought horses and equipment to Cumberland Knob to build bridge abutments for the Blue Ridge Parkway, Joseph Hyde Pratt was the first person to envision a scenic road through these mountains. Photography courtesy of THE WESTERN REGIONAL ARCHIVES, STATE ARCHIVES OF NORTH CAROLINA

Most accounts attribute the inception of the Blue Ridge Parkway to Virginia Senator Harry Byrd. In 1933, President Franklin D. Roosevelt visited a Civilian Conservation Corps camp where men were working on the fledgling Skyline Drive, a 105-mile two-lane road that would cut through the heart of the new Shenandoah National Park. Roosevelt was smitten with this job-creating project, and Byrd suggested funding a larger road that would eventually connect Shenandoah with Great Smoky Mountains National Park.

But the notion of a road traversing the Southern Appalachians predates even the establishment of the National Park Service. In 1906, a North Carolina geologist, Joseph Hyde Pratt, proposed a scenic road through southwestern Virginia and western North Carolina that he called “the Crest of the Blue Ridge.” He acquired funds and even started building the road in 1914, but construction was scrapped when the United States became involved in the first World War.

By contrast, Roosevelt’s road had the benefit of perfect timing: The automobile craze had taken hold of the country, and scenic drives were a newfound pastime. Meanwhile, the Great Depression had many in need of work. The first funds for the Shenandoah-Great Smoky Mountains Parkway were authorized in 1933. Politicians called it the “Appalachian Scenic Highway,” but locals just referred to it as “the Scenic.” Congress renamed it the Blue Ridge Parkway in 1936, a year after construction started. 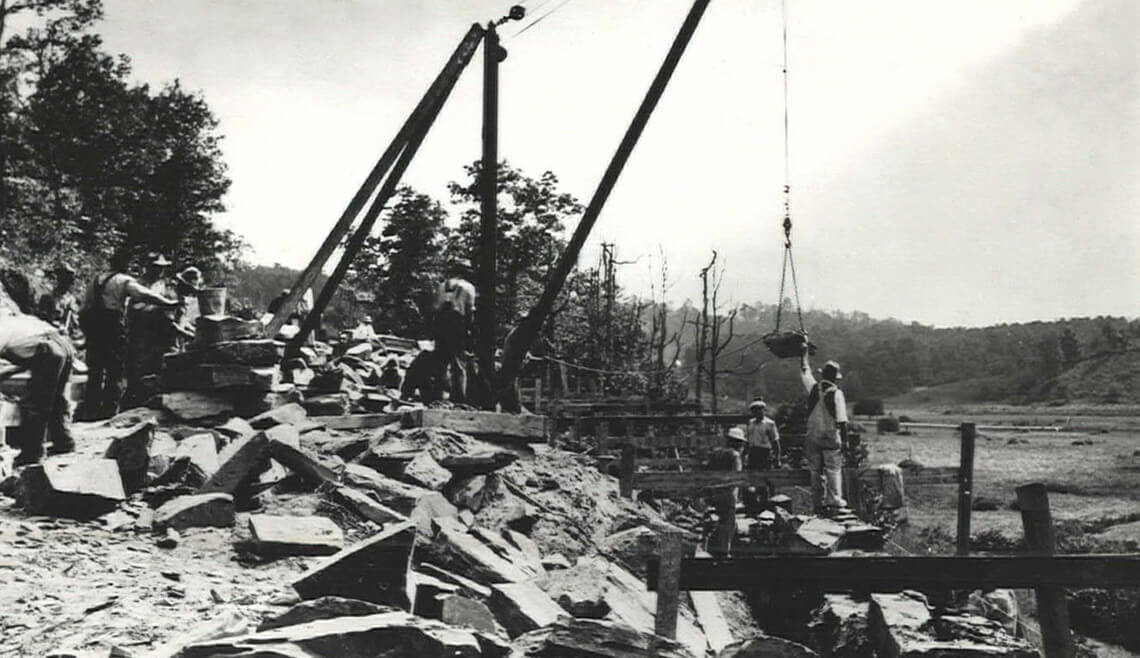 During the early days of parkway construction in 1935, workers in Alleghany County used a hand-powered crane to move blocks of stone for a retaining wall. photograph by NPS/WDS, COURTESY NATIONAL PARK SERVICE, BLUE RIDGE PARKWAY

Passing legislation to create the road proved easier than building the thing. The Southern Appalachians in 1935 were isolated, occupied mostly by subsistence farmers who were cut off from the rest of the country by the mountains they called home. Paved roads were virtually nonexistent, and maps were scarce. To help guide the route in North Carolina, R. Getty Browning, chief location engineer for the North Carolina Highway Commission, walked the entire length of the would-be road himself, finding the optimal route for the pavement on foot. He described the landscape as “an unbroken wilderness.” 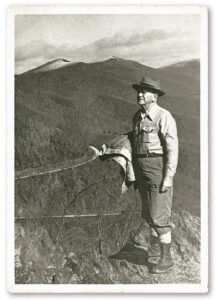 The rugged terrain was daunting, but the largest roadblock to construction was winning the public’s trust. Most locals were initially excited about the prospect of a highway connecting their farms to the rest of the world, but they were dismayed to learn that they wouldn’t be allowed to build access roads to the highway or establish businesses to capitalize on the travelers. The Blue Ridge Parkway was to be a different kind of highway — a road focused on recreation, not transportation; beauty, not business.

Not only would the government need a right-of-way for the road, but it would also need to purchase or condemn large swaths of land on either side to preserve the scenic quality of the area. Landscape architect Stanley Abbott insisted that a broad strip of parkland surrounding the pavement would be needed to eliminate the “parasitic and unsightly border development of the hot-dog stand, the gasoline shack, and the billboard.”

Carlton Abbott, who became an accomplished architect in his own right, eventually designing the Blue Ridge Parkway headquarters complex, says that his father was dedicated to the idea that the road would be a vehicle for preservation. “He picked up on the notion of the ‘great American countryside,’ which he saw was disappearing, and he thought this road could preserve some of it,” the younger Abbott says. “This is one of the only national parks that derives its beauty from man’s design. I think he knew how significant it would be.” 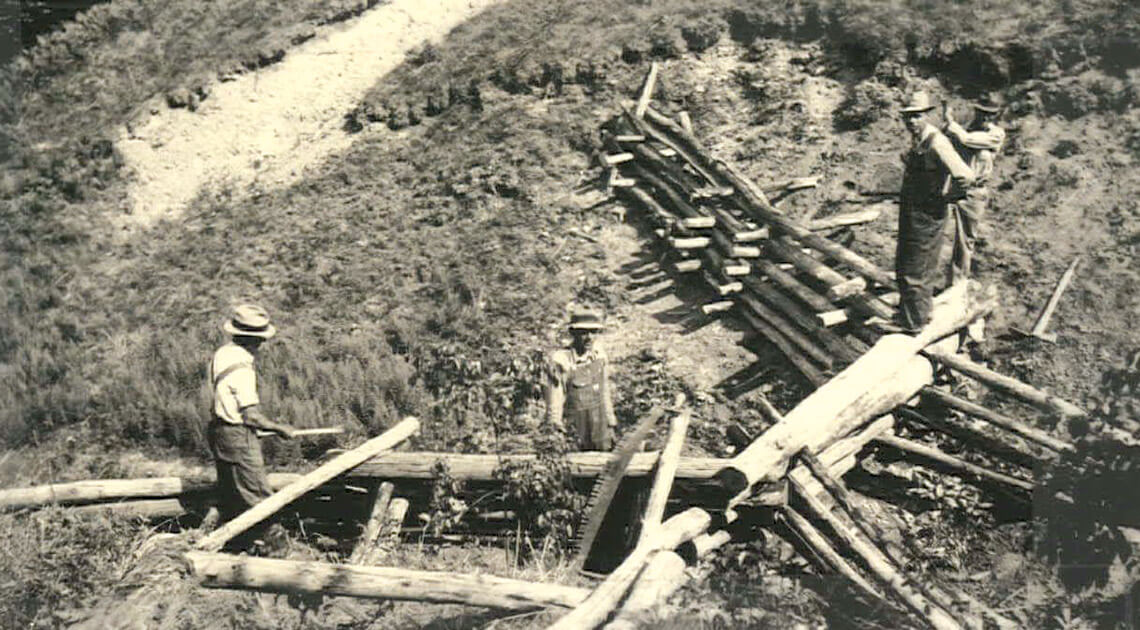 In 1936, workers near Cumberland Knob stood amid check dams that were constructed of logs and built for erosion control along the parkway. photograph by NPS/GWW, COURTESY NATIONAL PARK SERVICE, BLUE RIDGE PARKWAY

North Carolina and Virginia paid most landowners $30 an acre for tracts along the corridor, while some wealthier parties that could afford lawyers received more than $300 per acre. Some families sold willingly, while others were less enthusiastic. Construction proceeded in segments as land was purchased, and parkway workers reported a variety of protests along the way, from locals vandalizing construction equipment to one farmer greeting a road crew with a shotgun because he was worried that the noise from construction would disturb his chickens. Still, the majority of residents were eager for the work that the road provided.

Actual construction began on September 11, 1935, when 100 men showed up to start prepping Pack Murphy’s farm for the road. Skilled contractors were brought in from outside the area, but one project supervisor for the National Park Service noted that “about 90% of the hand labor came from nearby creeks and coves.” Those local laborers were paid 30 cents an hour and worked six days a week, digging stumps out of the ground, moving rocks, and, eventually, hand-leveling the roadbed for the parkway. The National Park Service has an archive of photographs showing men in brimmed hats, collared shirts, and overalls posing next to equipment, digging ditches, and building stone walls.

A few different New Deal-era “alphabet soup” federal agencies had a hand in the parkway’s construction, with the Works Progress Administration (WPA) focusing on clearing and grading the roadbed while the Emergency Relief Administration (ERA) and the Civilian Conservation Corps (CCC) concentrated on landscaping and trail projects. A staff of landscape architects and engineers oversaw the effort, ensuring that the work had little impact on the mountains. Stanley Abbott wanted the parkway to fit into the mountains “as if nature has put it there.” Every aspect of the road was agonized over, down to the smallest detail, like the stonework that protected a roadside tree. “All elements must compose, so as to please,” Abbott wrote. 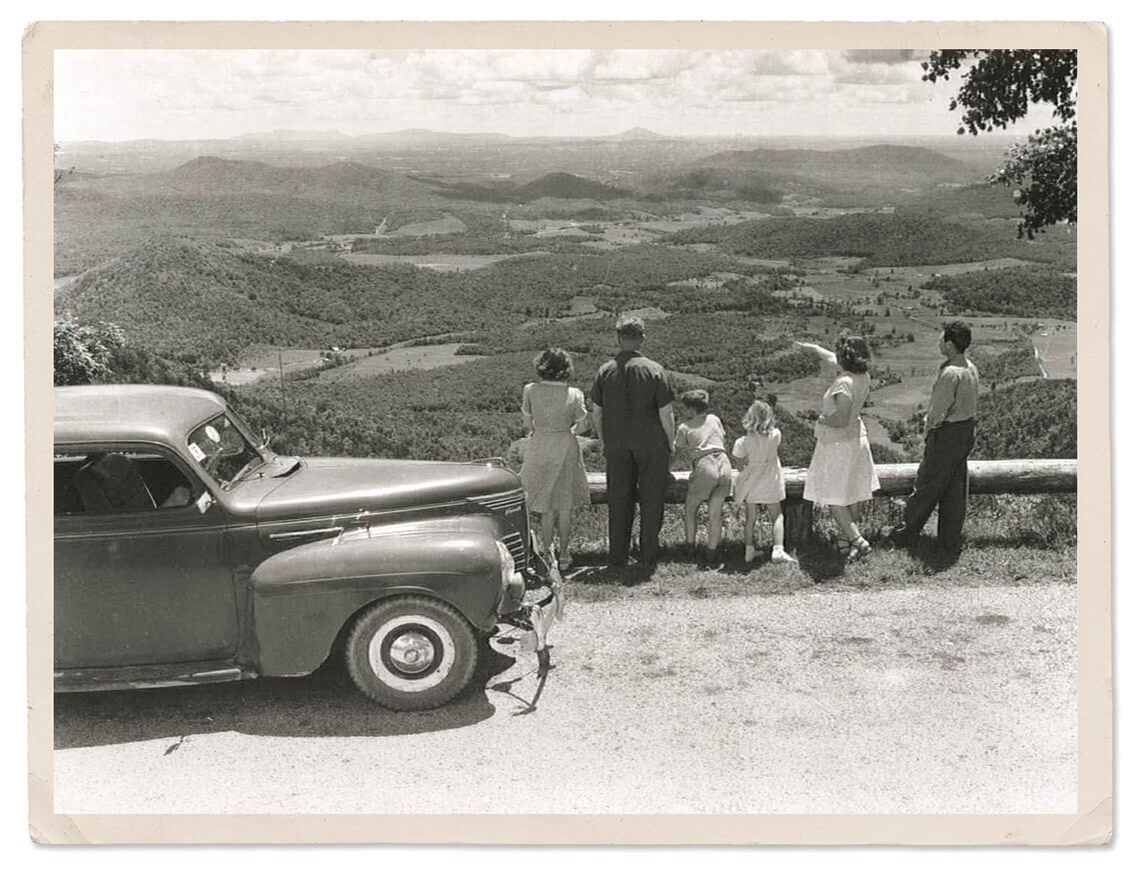 In many ways, the Blue Ridge Parkway was a restoration project, as decades of poor farming and logging practices had wreaked havoc on the land. The CCC worked to reforest the slopes surrounding the parkway, cutting down certain trees to open up views while planting native vegetation to restore bare mountains. In the spring of 1937, the CCC planted 225,000 pine seedlings that were donated by Great Smoky Mountains National Park’s nursery.

Work on the parkway progressed rapidly in the early years. The first 12.5-mile segment of road and the Cumberland Knob Recreation Area opened in 1937. By the end of that year, 115 miles of the route were graded. Throughout the ’40s, Cumberland Knob was the most popular recreation area along the route. In photos from that era, families and groups picnicked in suits, dresses, and hats, sipping soft drinks out of big glass bottles.

The apple tree under which Rebecca Moxley was buried is gone now, but the forest that surrounds the picnic field is healthier than it was when the National Park Service first took ownership. Picnic tables border the trees close to the parking lot, and a couple of horseshoe pits, overgrown and underused, are dug into the edge of a long meadow extending from Moxley’s resting place.

Walk the short Cumberland Knob Trail, and you’ll find the original picnic shelter. The stacked stone walls and chimney are still in good shape, but the timber beams sag with age. Carry on down the path, and you can hike the Gully Creek Trail to a series of small falls that tumble over rock slabs and empty into shallow pools. The CCC built this trail, and it’s a work of art, meandering in and out of ravines, passing massive boulders and slopes thick with ferns. One can imagine the laborers, who were local and likely familiar with the terrain, taking pride in their work and joy in the notion that every foot of trail they built showed off more of their spectacular backyard.

The Blue Ridge Parkway might have been a public works program for those in need during the 1930s, but the true legacy of the project lies in the preservation of Southern Appalachian nooks and crannies for future generations: The gentle slope of a roadside meadow. The careful intersection of a trail crossing a creek. The shade of the trees surrounding Rebecca Moxley’s grave. Those details are all part of a gift that might be even better received today than when it was first given in 1937.