Nathan Favors rolls open the door of his workshop, and the smell of camphor wood explodes into the daylight. It’s a menthol scent, air hitting the back of the throat as cool as a cough drop. It’s been hours since the woodworker was out here cutting the species, but its essence is still strong enough to taste. Favors loves working with the local wood around his western North Carolina home, but he often sources it from other parts of the country and abroad. The camphor came from a recent buying trip to Florida.

No matter where Favors exhibits his artwork — wooden bowls shaped from the burls, or irregular growths, in trees — one of the most common questions people ask about his bowls is: How long did it take to make them? It’s a surprisingly complicated question, and Favors’s workshop acts as an illustrated answer. In its wood-lined interior are hundreds of bowls in progress. Piled in corners are some that have already had a turn on Favors’s giant lathe, a mechanical rotating tool, and are awaiting a second round. Others are completely in shape but still drying.

In a far corner is an inlay station, because some of Favors’s most arresting pieces aren’t just wood — they also glimmer with metal and stone. The natural holes that some people might see as defects in a piece of wood are, in Favors’s eyes, opportunities. When he doesn’t leave them as interesting odes to natural growth, he fills them with treasure — copper veins in dark walnut, turquoise on blond wood, opal exploding among the grain. “I’ve always wanted to do things a little differently,” he says. “I’m always experimenting.” 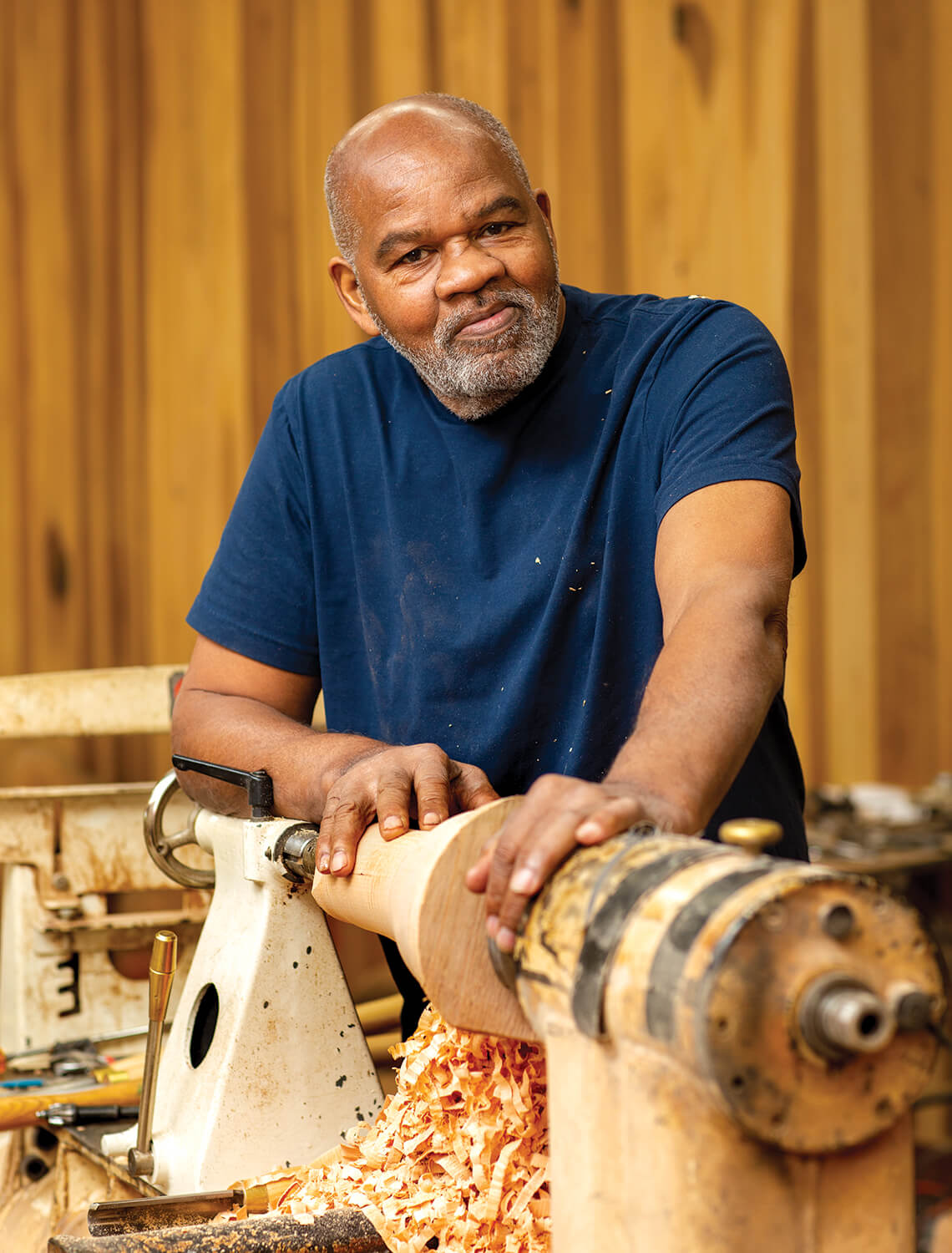 The tools of Favors’s trade include the wood lathe in his workshop (above), as well as devices such as bowl gouges for carving and spindle gouges for adding detail (below). photographs by Tim Robison 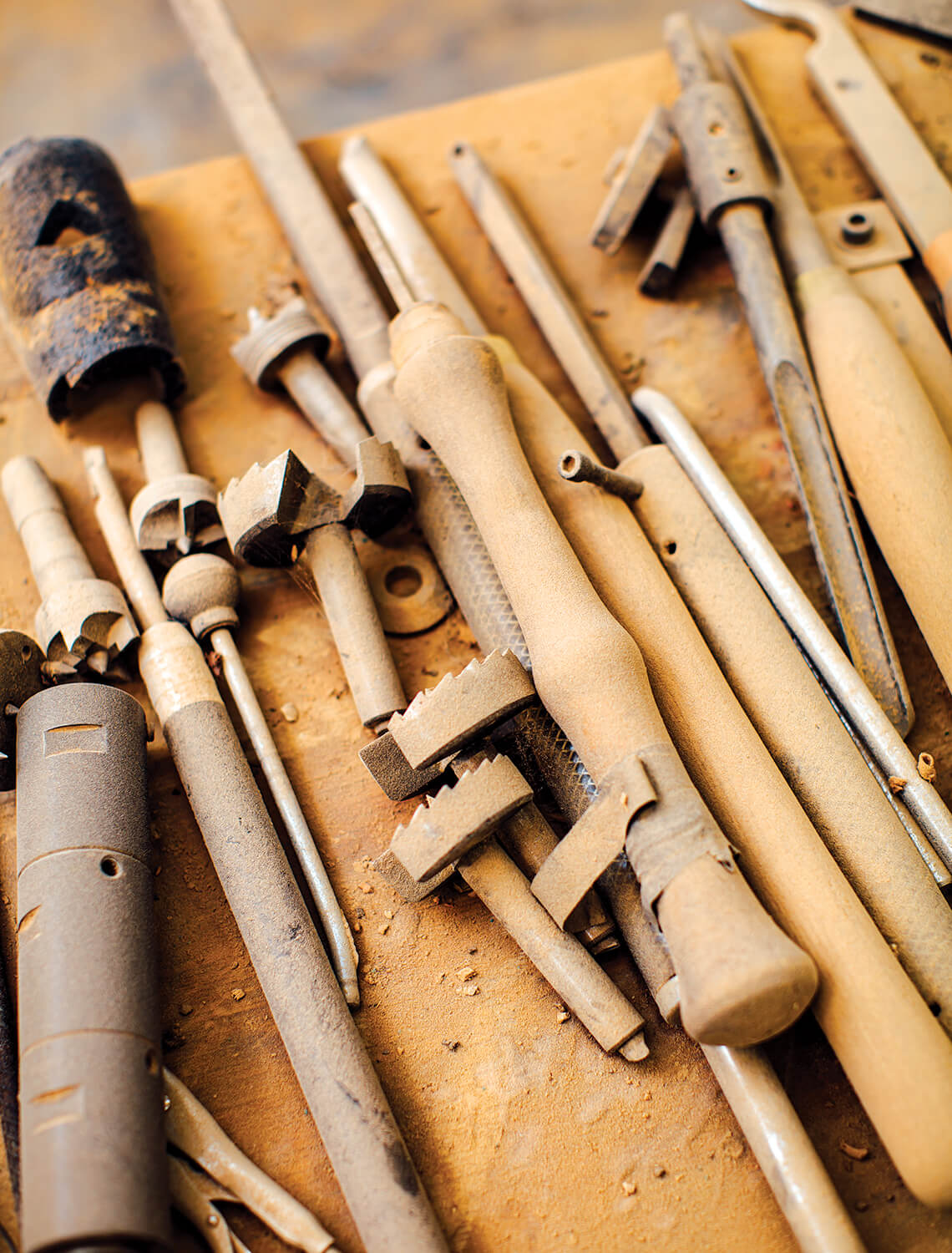 The nearby window-rich house that Favors shares with his wife, Mariella de Leeuw, overlooks green acreage. Whereas his workshop is full of tools and unfinished pieces, the basement of the couple’s home has been converted into a gallery for displaying finished works of art. It’s now become a mainstay of the biannual Toe River Arts Studio Tour in Mitchell and Yancey counties.

Favors and de Leeuw found their home a little more than two years ago while scrolling through online listings. The house looked to them like a second chance at happiness. After Favors’s first wife died, he connected with de Leeuw on the craft-show circuit, where he was selling wooden bowls and she was vending textiles. Their circumstances led to a long-distance relationship: She lived in New York, he in Pennsylvania. They decided to unite in a geographically neutral location, and there was something about this house in Bakersville that just felt right. During the closing process, Favors and the seller discovered that they recognized each other’s names. It turns out that Favors had delivered firewood to the man years earlier, when both lived in Pennsylvania.

Wood-delivery had started as a side hustle for Favors, undertaken on days when he wasn’t working his factory job as a machinist or with his sons in a tree-removal business. Dealing firewood is what introduced him to a more meaningful trade. After long shifts spent in industrial environments, he found that he was intrigued by the organic nature of the lumber he was slinging. When an injury forced him to stop delivering wood, as he could no longer handle the labor of moving truckloads of lumber, Favors decided to try his hand at shaping it instead of lugging it around town. Decades later — after Favors retired from the factory and took up woodworking full time — art collectors around the country have come to know him as The Bowlmaker.

Favors’s beloved Bakersville house is full of his creations. They crowd the foyer floor, line the mantel, and weigh down kitchen shelves. The windows that flood the house with light also frame acres of forestland. Favors appreciates the trees. He’s familiar with the sweet smell of cut maple and the clean scent of pine, the peppery tones of walnut and the licorice scent of sassafras. Standing in the woods that border his yard, he can tell which of the trees would provide the best material for his woodworking. He points to a slender tree that’s punctuated by an irregular growth, or burl, midway up its trunk.

Even so, this is not a tree that Favors will take. He works with discarded lumber, trees that have been rejected by loggers or lost to development. When he moved to North Carolina, one of his first orders of business was looking for suppliers. Some local loggers waved away his requests for burls, saying that attempting to salvage them would be a waste of time. Favors understood their stance, because he once saw burls that way, too.

It was through his firewood clients — some of whom were woodworkers — that Favors learned to appreciate the interior swirling patterns of burls. But he also learned that burls are difficult to work with. They’re dense, resistant to splitting. Some are too heavy to move without machinery. It’s hard to see a burl’s beauty when it’s laboriously being worked into a bowl. But the finished results are almost always stunning.

“Before I met Nathan, when I looked at trees, to me, they were all the same. I used to think that gnarled trees were ugly. Now, I understand: That’s the good stuff.”

Favors shuffles away from the forest floor’s leaf litter and onto a sawdust-covered patch of earth in his backyard, where de Leeuw joins him. The area feels like a natural-world sculpture park, featuring burled logs and contorted root balls. Some of them will be cut, slice by slice, to sizes that Favors feels comfortable working with.

De Leeuw sits down on one of the larger burls, unremarkable in its current state. “Before I met Nathan,” she says, “when I looked at trees, to me, they were all the same: pine or not pine. I used to think that gnarled trees were ugly. Now, I understand: That’s the good stuff. A straight-up tree probably doesn’t have anything interesting inside of it.”

As a machinist, Favors punched commands into computers. He had to be methodical, quantitative, measured. Woodworking, from the very start, provided a chance for him to break from uniformity. It allowed room for creativity, for unexpected wonders to take shape. “This work is different,” he says. “Here, I get to actually work with my hands.” He sets a piece of cherry into the chuck of his lathe and tightens a key to hold it in place. The machine will turn the wood while he holds a slender bowl gouge, carving it into shape with metal against soft grain.

The lathe starts up, and Favors holds steady, pressing his tool against the cherry: rattatat. Spiral shavings catch on his shirt and arms as he works, until he’s covered in sawdust. The cherrywood, dull at first, begins to glow a dozen shades of red. Gone is the flat surface that looked unremarkable when he began; revealed is an interior world, with lines like a story waiting to be read. The wood’s markings are as unique as a fingerprint. And the rhythm goes on — rattatat, rattatat, rat, tat, tat — chaotic, then steady, until the cherry has gained the subtle shape of a bowl.

The finished projects are owned by all sorts of people, including the former firewood client who built the house in which Favors lives and works. Since being reacquainted in North Carolina, the two have become friends, and the man who sold Favors his home now has an open invitation to visit it.

When the scent of fresh-cut cherry, intermingled with camphor, overwhelms Favors’s workshop, he steps outside for some fresh air. His eyes, adjusting to natural light, come to rest on a metal shelf he uses to store firewood. There’s a large burl leaning against it in a sort of fallen-tree purgatory between Favors’s firewood stash and his woodworking supply. Favors suspects that this piece of wood might be starting to rot. The burl could be turned into a bowl in his studio — or it could be burned to ash in his fireplace. It depends on what Favors, seasoned in the skill of divining latent grace, sees upon closer inspection.

It can take anywhere from a few months to a few years, forest to gallery, for one of Favors’s bowls to be born. But, in a way, each of them — especially those born of burls — has a story that began many years before the artist even started his work in the first place. A burl is, after all, an irregularity in the slow growth of a tree, be it young or ancient. And the growth’s unique patterns are the remnants of buds forced to turn inward, year after year, because they were trapped due to some sort of trauma. In this way, Favors’s woodworking — inspired by the limitations of his own injury — transforms tangible remnants of a tree’s pain into beauty.

He walks over and reaches out to touch the bulbous piece of wood, which will be challenging to cut no matter what becomes of it. “I’m going to get to this one as soon as I can,” he says, pressing his thumb against a spongy spot. The way it yields to his touch is disconcerting, but Favors doesn’t turn away. He runs his fingers over bark, considering the burl’s potential to become something more valuable than the sum of its parts: art. “This one,” he says, “still has a chance.”