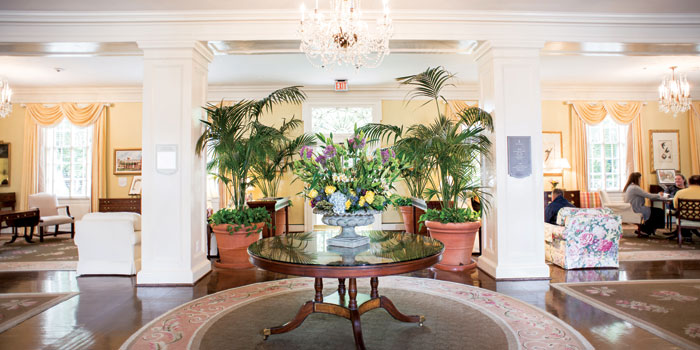 Editor’s Note: This story was originally published in August 2012.

It’s just a floor, a black-and-white terrazzo surface in a checkerboard pattern. But it becomes something far more meaningful because of where it is. It’s in the Old Well Room, in The Carolina Inn, in Chapel Hill. In this place, the floor becomes a feeling. One step onto the storied surface inspires success, pride, and accomplishment.

The inn where the floor rests, The Carolina Inn — a colonial-revival-style structure framed by Pittsboro Street, Cameron Avenue, and Columbia Street on the western rim of the UNC campus — is the place people go to celebrate those milestone moments they measure the rest of their lives by. For every bride who dances across that black-and-white floor, it’s the moment she’s always wanted.

For The Carolina Inn, it’s one more dream fulfilled in an 88-year history of pleasing people. The inn plays host to hundreds of events a year. The celebrations run together, thousands of carefully crafted toasts and once-in-a-lifetime experiences, no one standing out more than another, all blended into the legacy of the perfect host. But a select few occasions continue in photographs on the inn’s walls.

Near the bar, a picture of a party hangs in the hallway. The woman of the hour is Missy Julian Fox, the daughter of Chapel Hill’s first family of fashion. Her father, Maurice, founded Julian’s College Shop on Franklin Street.

The date of the photo reads June 22, 1991. That night, Fox celebrated her 40th birthday and her victory in a yearlong battle with breast cancer. When she asked her mother — who she calls “a beautiful, Southern lady in every sense of the word” — how she would thank all the doctors, nurses, and neighbors, her mom replied: “Honey, we’re gonna have a hell of a party.”

That night, The Carolina Inn celebrated a community that pulled one of its own through her most difficult challenge. That’s what the inn does best. It supports the community that supports it.

“It’s one of those things that you pass on to people,” Fox says. “It makes you feel your best self.”

The Carolina Inn became the elegant destination it is today out of necessity.

John Sprunt Hill, UNC class of 1889, came back to visit Chapel Hill in the fall of 1921 for a meeting of the UNC Board of Trustees. With limited lodging options, he settled for a rundown hotel on Franklin Street, along the northern border of campus. The heat of a Southern autumn and the pitter-patter of mice kept him awake all night.

Hill was among the first few classes of alumni who took responsibility for the future of their alma mater. As the university built its reputation as a prominent academic institution, Hill saw the need for “a cheerful Inn for visitors, a town hall for the state, and a returning home for alumni.”

He purchased the property where the town’s namesake “Chapel on the Hill” once stood in the 1700s. He hired architect Arthur Nash, who was in the process of designing UNC’s Wilson Library, Graham Memorial Building, and Spencer Dormitory, to design the new inn.

Hill wanted the inn to feel like part of the university. The architect blended late 18th-century elements from George Washington’s Mount Vernon with early 19th-century styles from Richland Plantation in Louisiana.

When the inn was completed in December 1924, it was a modern structure. It had an all-electric kitchen, a commercial ice maker, and an elevator. But Hill wanted the new inn to look like a building that had stood in this town for generations. Thick paint simulated old plaster on the interior walls. Dim bulbs in sconces looked like candlelight.

When you attend the University of North Carolina, you ache to belong. You find yourself doing things that you think people must have been born doing in this town. You iron the collar on your polo shirt from Julian’s. You denounce anything and anyone from neighboring institutions in Durham and Raleigh. You drink craft beer on the second-story patio of Top of the Hill at the signature intersection of Franklin and Columbia. Relationships with the town are built on a staircase of moments, rites of passage outlined by people who came before you.

If you’re the child of an alumnus, you have a head start. You grow up hoping you’ll find your way to this haven on the hill. And the moment you step onto that black-and-white floor inside The Carolina Inn, you realize it. You made it.

A tall, skinny kid with a fledgling stand of facial hair follows his dad to a table. He’s about to make the biggest decision of his life so far — where to go to college. His dad’s pulling for a Tar Heel. And the breakfast spread works in his father’s favor. What kid wouldn’t want to go to a school in the South where the biscuits are bigger, the grits creamier, and the dining rooms fancier than any he’s ever seen?

When UNC wants to make a lasting impression on people, it invites them to the inn.

Eleven years ago, the history department hired William Ferris, who served as chairman of the National Endowment for the Humanities in Washington, D.C., and was the first director of the Center for the Study of Southern Culture at the University of Mississippi. The department interviewed Ferris in the Blue Ridge Room at The Carolina Inn. Ferris now uses the inn to craft first impressions just like he experienced.

“I take students, faculty, townspeople, and it always works,” Ferris says. “We come away feeling like that’s the nicest hour.”

Throughout its history, the inn has maintained its initial purpose as a representative of the university and its people. John Sprunt Hill donated the inn to UNC in 1935. He specified that the profits of the inn should support the university library, specifically the North Carolina Collection. Today, the inn operates under an unusual but functional model. The university owns the inn, but a private company, Destination Hotels and Resorts, manages the business. The inn supports itself through its revenue and still contributes a portion to the North Carolina Collection.

But Ferris says the inn’s worth trumps monetary figures.

“You can’t put a value on the inn,” he says. “If you took it away, UNC would be diminished in unbelievable ways.”

Around campus, it seems almost anyone notable — professors, coaches, and students — came to know their school through its inn. UNC President Emeritus William Friday named it The University’s Living Room.

Football season is one of the busiest times at The Carolina Inn. The rooms start selling out for home-game weekends within 24 hours of the schedule release.

When he’s home in Camp Hill, Pennsylvania, Bill Balaban introduces himself as an insurance regulatory lawyer. But at his temporary home for weekends during the fall —The Carolina Inn in Chapel Hill — Balaban introduces himself as “class of 1971.” He attended UNC on a football scholarship and spent three years on Coach Bill Dooley’s special teams. Now he’s one generation in a long line of alumni who take responsibility for the future of their alma mater.

He holds season tickets every fall, sent his daughter to school here, and served on the Parents Council. And every time he makes a trip to Chapel Hill, which he does 10 or 12 times a year, he stays at The Carolina Inn. After he checks in, his first stop is the newly renovated bar. Here, the walls are covered with decades of cartoons from UNC’s student newspaper, The Daily Tar Heel, another example of how this place supports the work of its future patrons.

As Balaban sits down, Phillip Ivey pours his drink.

After 10 years behind the bar, Ivey knows what the regulars drink. When he left a UNC music degree unfinished in the late ’90s, The Carolina Inn gave him a way to succeed.

Ivey takes ownership of his bar. He developed half of the drinks on the menu, including the favorite Tar Heel Tea with sweet tea, bourbon, lemon, and mint. He arrives at 4 in the afternoon to pour glasses of wine for professors and stays until midnight to mix cocktails for the after-dinner crowd.

Whatever your role at The Carolina Inn — arranging the fresh flowers in the lobby so they serve a warm welcome, folding the corners of the sheets just so, or planning the details of the reception down to the last champagne flute — if you do it well, the inn supports your effort.

For most people, Chapel Hill is a stopping point. UNC students make up 35 percent of the town’s population. For four years, those students are true to their town. They believe in it, they fall in love with it, and they pledge to return. But few do. At least not to stay.

They visit The Carolina Inn for homecoming weekend or a sorority sister’s wedding. But for Chapel Hill natives like Missy Julian Fox, the inn serves them for a lifetime. Fox has so many memories from the inn that she modeled the black-and-white tile in her kitchen after the floor in the Old Well Room.

When she held her 40th birthday celebration at the inn in 1991, it was an event she had aspired to since she was a little girl. One day years ago, when Fox was in the seventh grade, she and her best friend decided to have a proper lunch. They made appointments at the beauty salon on Franklin Street and then walked into The Carolina Inn with their hair coiffured, dresses fluffed, and shoulders straight.

They carried their trays through the cafeteria line, which was a local favorite at the inn for 70 years. When the girls reached the end, they looked down at the hot dogs on their plates and decided that selection didn’t seem right for ladies who lunch. So they added a side of carrots and picked up glasses of tea.

“We just thought we were the two most mature young women and luckiest on the planet,”
Fox says.

That day still stands out to her at age 61. Sometimes, life’s happiest moments aren’t the biggest. You might measure your life by the monumental ones, but the small ones fill all the spaces in between.

The day Fox gave birth to her son, Bart, September 27, 1983, the first call she made was to The Carolina Inn. Her parents were eating dinner in the cafeteria with her 3-year-old daughter, Betsy. The staff brought them to the phone, and as Fox shared the news, she heard everyone in the dining room cheering.

This December, Bart will wed his fiancée, who also grew up in Chapel Hill, at The Carolina Inn. When she dances across that black-and-white floor in the Old Well Room, it will be the moment she’s always wanted.

For The Carolina Inn, it will be yet another accomplishment weaved into its legacy, a legacy built on creating once-in-a-lifetime moments and making them last.

Leah Hughes is a former associate editor at Our State magazine. Find more of her archived stories here.