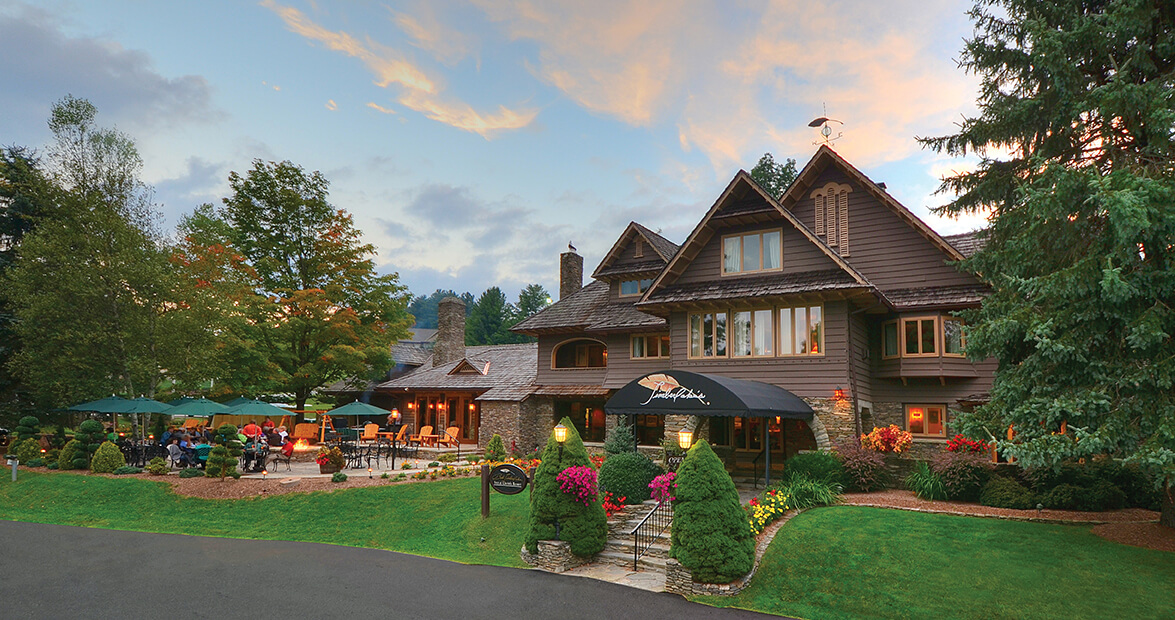 We’re peering into the Johns River Gorge. A band of silver clouds brushes over a vast palette of trees in the Pisgah National Forest. Pellets of cold rain tap our coats.

A black kitten leaps onto a wooden railing no more than six inches wide. If the kitten loses his footing, he’ll plummet three-quarters of a mile beneath The Blowing Rock.

I hold my breath. Sometimes, I think, the only choice is to let a situation unfold.

In the fog, the kitten trots along, his tail erect for balance, unfazed by what lies below. Suddenly, he jumps to the concrete and greets us. We learn that Grover lives at the tourist attraction.

My husband, Dennis, and I love cats. And forests and rocks and rain. We have all of these things on this wonderful, blustery day at The Blowing Rock. Because of the weather, we get a discount on admission. We pay our five dollars, laughing to ourselves, because we’d gladly pay extra for fog. We’re that kind of people, fond of what the Irish call “soft days.” Clouds cushion life’s sharp edges, filter the glare.

After 45 minutes in the drizzle, we head back two miles to the Chetola Resort at Blowing Rock, a luxurious lodge and inn, plus more than a hundred condominiums built into the mountainside. In Cherokee, Chetola means “haven of rest,” and that’s what we do: relax by a wide window at the resort’s Headwaters Pub, each of us warmed by a tumbler of 12-year-old Macallan. Nineteen years ago, Dennis had wooed me over a glass of Scotch.

He swirls his Macallan, the legs of the liquor running inside the glass, and his eyes redden.

“Just make time for me.”

That’s what we’ve come to Chetola to do: to make time. To draw out the days as long as daylight holds. To attend to every moment.

Early morning from our balcony, I smell woodsmoke and petrichor, the aroma of loam dampened by light rain. A flock of geese honks over the ridge. Dennis loves birds, even species he’s seen hundreds of times before. But he’s still in bed. I let him sleep. 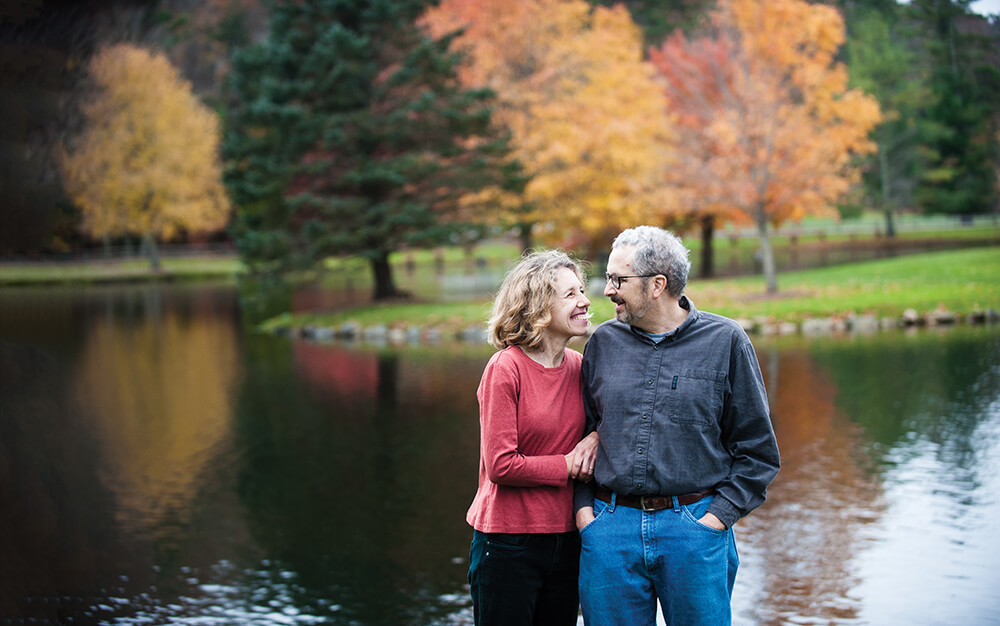 Dennis and I almost didn’t happen. When I met him, he charmed me with his sense of humor, his intelligence, his goodness. But he also had a girlfriend. Eventually, the girlfriend moved away, and one summer evening, Dennis, who’s 13 years older than I, asked me to go with him to the ice-cream stand.

I’d finished only half of my coffee malt when he asked me if I’d like to go to dinner sometime.

But I didn’t really mean no. I really meant: Not now. You caught me off guard. I need time to think.

He felt rejected, and we didn’t see each other for two years.

In that time, I got a boyfriend. Then one night, I found myself sitting outside a nightclub with Dennis. He was still funny and smart and good. Soon, the boyfriend moved away, and Dennis and I went to dinner.

Sometimes, the only choice is to let a situation unfold.

When Dennis and I began dating, he was working in the geology library at Indiana University. An amateur naturalist, I marveled that Dennis spent his days among books and journals full of information on rock formations and volcanoes. Outside the elevator was a seismograph. I often stopped to examine the pen and the jagged lines, imagining where, at that moment, the earth was shifting under someone’s feet.

From a rocking chair on our Chetola balcony, I try to envision life in this spot about 300 million years ago, as Africa was crashing into North America. When those tectonic plates collided, the force broke off a piece of the North American crust and thrust it westward, folding younger rocks over older ones, while crushing others under pressure.

Volcanoes peppered the landscape, and lava boiled in the valleys. Over millions of years, the plates beneath the supercontinent drifted apart. All that ruckus created buckles and folds and fractures that built today’s Blue Ridge Mountains, setting the stage for Chetola, this balcony, and me in this rocking chair, to exist.

When the lava cooled, it became basalt, an iron-rich rock used at the Spa at Chetola. The River Rock Hot Stone Massage uses flat, egg-size rocks — in a former life, their rough edges were constantly smoothed by water — placed on the body’s energy zones, like the spine. Combined with massage, the heated stones help rebalance the body and the mind. That’s also what we’ve come to Chetola to do: find balance.

That evening, Dennis and I eat at Timberlake’s Restaurant at Chetola. A wood-paneled lodge, its walls are decorated with feathered turkey tails, vintage fishing poles, and lithographs of barns, snow, and moonlit landscapes by North Carolina artist Bob Timberlake.

As we feast on pecan-crusted Scottish salmon, our server, Sarah, shares that she’s studying geology at Appalachian State University.

“We love rocks!” I exclaim.

“The Appalachians were once the size of the Himalayas,” Sarah says, unveiling the dessert tray of tortes and cakes. “But erosion’s worn them down.”

We briefly geek out on science — reverse faults, the properties of quartz, landslides, the delicate balance between the Earth’s crust and mantle — and discover that this area is still rattled by earthquakes, including four in the past year. But they were all minor. Most people didn’t notice the earth shifting under their feet.

Except for a backache, Dennis had never felt better in 30 years. That’s how he started his story when doctors asked how he came to be in their offices. With a disciplined regimen of diet and exercise, he’d lost 30 pounds over the summer. He had more energy. It was just his back.

Around Christmas of 2014, Dennis underwent X-rays and routine blood tests, and made a follow-up appointment for a week later to discuss the results. But the nurse practitioner called within a day, requesting that he come in as soon as possible.

Dennis’s PSA, which measures the level of a protein produced by the prostate, registered 269. The normal range is zero to four. Subsequent CT scans showed tumors in several lymph nodes, one as large as a golf ball. In a bone scan, his spine looked as if it were riddled with buckshot.

Dennis has stage 4 prostate cancer. He can be treated, but not cured.

He sees his oncologist at the Duke Cancer Center in Durham, where people from throughout North Carolina and the nation arrive each day to undergo chemotherapy, radiation, surgery — whatever might extend their lives.

Most people don’t notice the earth shifting under their feet.

Given that thousands of people pass through the center each year, it’s not surprising that at Chetola, we meet a fellow caregiver. It’s common in these situations to exchange notes on the prosaic details of appointments: the quality of coffee in the café, the volume of the TV in the waiting room.

Over a breakfast of biscuits and gravy at Timberlake’s, the conversation eventually returns to illness.

“Which floor do you go to?” I ask. Inside the elevator, a directory lists, by level, every place cancer can settle.

“How are you doing?” she asks.

One, two, maybe five years; it’s hard to know. While hopeful, Dennis is also a realist.
Sometimes the only choice is to let a situation unfold.

The Resort’s extensive Wellness Center includes an indoor heated pool, jacuzzi, and dry sauna, which are especially welcome in the mountain winters, and tennis courts and hiking trails for the crisp springs and summers. One morning after breakfast, Dennis and I walk a couple of laps on the paved path around Chetola Lake. Lights rim the path, and at night, they reflect off the water; in the dark, the lake looks as though it’s illuminated from beneath. 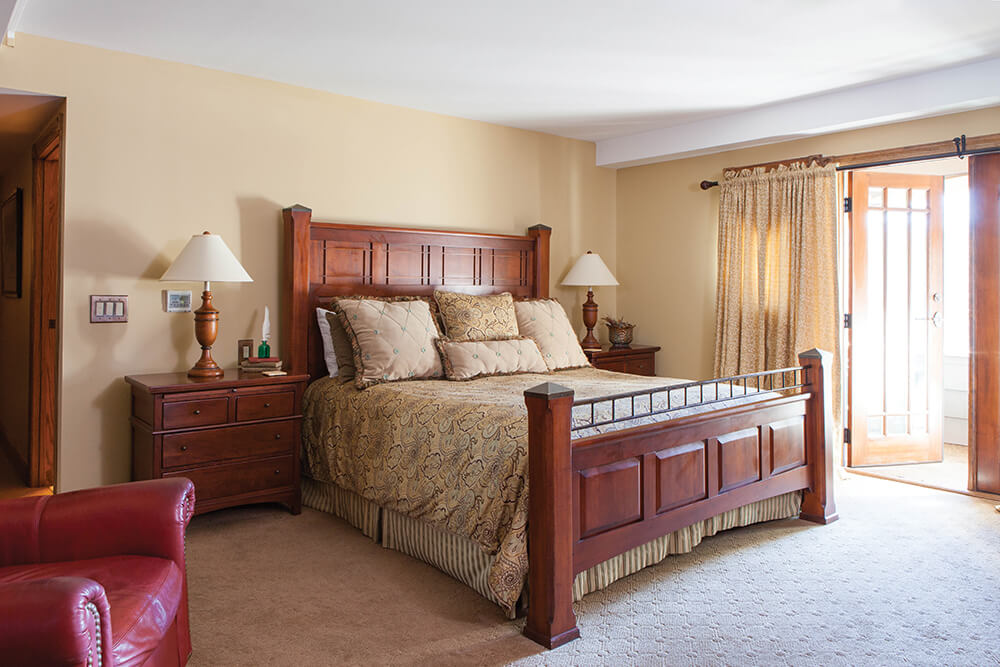 The lake lies at the bottom of the mountain, in a bowl, with the town of Blowing Rock up one side, the forest and Chetola up another. At one end, a bridge leads from the resort to the town. Amid the roar and the spray of a man-made waterfall, people lean against the railing and toss their fishing lines into the plunge pools.

We watch the waterbirds: swans diving for fish, ducks sleeping with their necks turned, their heads tucked into their feathers — and geese. As a rule, geese do not like me. Step 1: Honk. Step 2: Expand wings like the Hulk flexing his muscles. Third and final step: Chase.

A particularly temperamental goose and I escalate to Step 2. I keep walking, faster than a jaunt, but not quite a trot. Dennis thwarts the angry bird — it’s not the first time he’s had to defend me from a goose.

It begins to sprinkle. Dennis and I don’t speak, leaving space for sound: of leaves, of rain, of ducks.

We’re like the older couple I saw at breakfast: drinking coffee, gazing out the window, not saying a word to each other, communicating telepathically.

I’m worried about my tests next week.
Whatever happens, we’ll face it together.
Remember when we went out on the canoe?
I love to canoe with you.
This is a perfect day.
A soft day.

Only a few people are braving the weather at The Blowing Rock today. A couple offers to take a photo of us; we return the favor. Despite the 40-degree temperature, the man wears shorts and a windbreaker. He’s at least six feet tall, and stands atop the rock. A sign advises visitors that they do so at their own risk.

One of the odd features of this place is that the wind sweeps down the gorge, then up the steep slopes to The Blowing Rock. This phenomenon lies at the heart of a Chickasaw legend. In that story, a man leaps from the rock into the gorge. His lover prays to the Great Spirit, and a gust of wind blows up from the bottom, returning the man to her arms.

I take the first step onto the rock, slippery from the fog that Dennis and I love. My legs tremble, but then I find my balance. I look neither up nor down. Instead, I look straight ahead.