When Vernon Guthrie opened The Crab Shack in 1975, Salter Path was a tight-knit community of families who worked on the water. There wasn’t much development. The main road into town hadn’t even been paved until the 1950s.

Today, Vernon runs the restaurant with his son, Craig, and the character of the town has changed. Tourism drives its economic engine now, and Craig keeps that in mind when planning The Crab Shack’s menu, offering a little something for everyone. There’s fried, steamed, and Creole-seasoned seafood, plus panned-in-butter shellfish, which is less common on coastal menus. Plenty of steak, chicken, and burgers, too, all of which can be eaten in a casual setting indoors or on the airy deck with a view of the water. One directive about the food comes straight from Vernon: “Mound up the plates. Nobody leaves here hungry,” Craig says. “He’s preached that and preached that to me.”

And once in a while, there’s a bite of local history on the menu. The Crab Shack occasionally offers a dish that has a special place in the hearts of locals and is deeply tied to the communities along Bogue Sound: conch stew. It’s a taste of home that they’ve never forgotten, and it shows how the restaurant has stayed true to its coastal roots.

The 147-seat restaurant began as an outgrowth of a seafood market, where members of the Guthrie family — longtime fishermen — sold their catch. The Guthries still fish; from the deck, visitors can look out over Bogue Sound and spot the boats Miss Makenzie and Capt. Buck, named for Craig’s daughter and late uncle, and the Michael Brennen, named for a cousin. “There was a back part [of the market] where they had benches, and Dad decided one day that he wanted to open a restaurant,” Craig says. “He got my mom and grandma to make the hush puppies, [and he] put in two tables and a bar where people could eat crabs or whatever.” 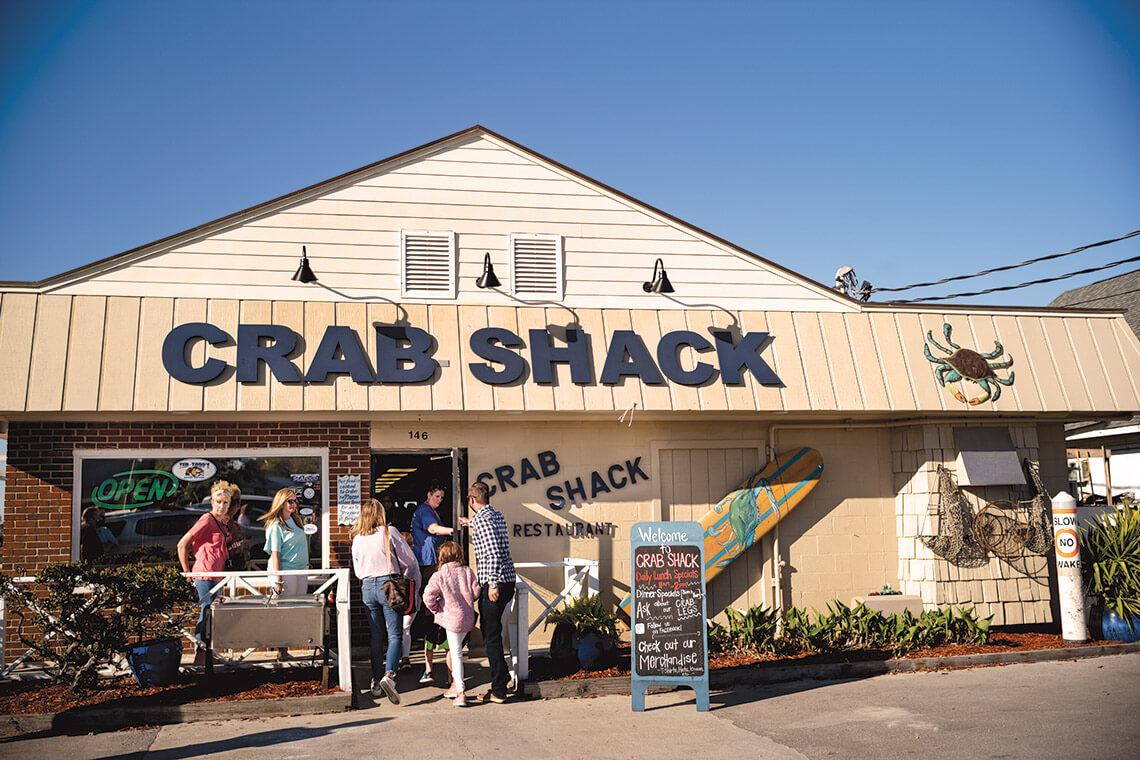 At The Crab Shack, it’s easy to see why coastal food is comfort food. photograph by Charles Harris

Fishing here goes back generations. By the early 1800s, European settlers were living in the area among Native peoples. When an 1899 hurricane devastated Diamond City on Shackleford Banks, droves of its residents floated their belongings across Bogue Sound and rebuilt in what was known as Bogue Banks, now Salter Path. Ever since, the sandy strip of land between the sound and the Atlantic Ocean has been a community of independent-minded people who want to be a bit off the beaten path, like the 18th-century pirate Blackbeard, who, recent research shows, took refuge there.

Conch stew is a nod to the perseverance that so many coastal families and communities need to survive hardship, so much so that The Crab Shack offered it soon after reopening in 2019 following flooding and damage from Hurricane Florence. Conch, like whelk, has long been caught nearby. Never ones to waste anything, coastal families through time have found ways to cook both. Community cookbooks from nearby Morehead City and Harkers Island include recipes for conch fritters, stew, and chowder. In their classic Coastal Carolina Cooking, Nancy Davis and Kathy Hart quote one home cook: “If you ever eat conch chowder in Carteret County, you’ll never want to leave.” 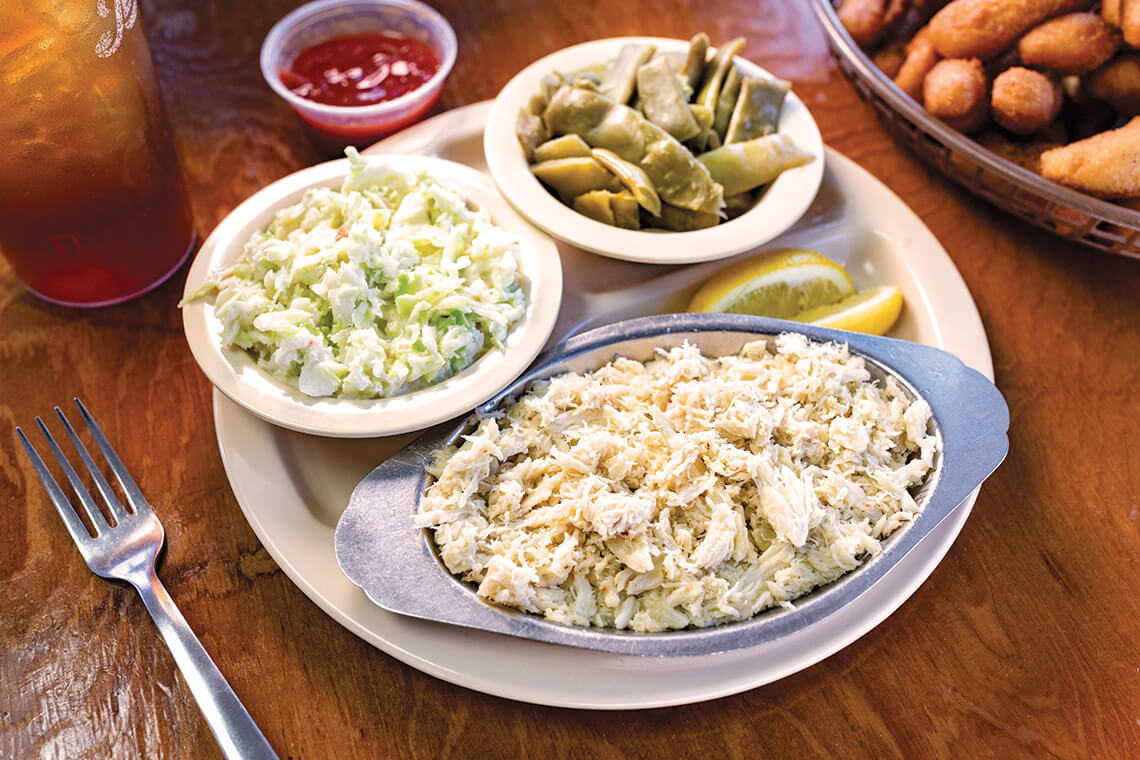 The Crab Shack lives up to its name, offering customers a selection of steamed king, snow, Dungeness, and blue crab legs. Plus, crabmeat that is panned in a generous amount of butter. photograph by Charles Harris

Yet none of the recipes mention how hard it is to get the meat out of a fresh-caught conch or whelk. It requires drilling holes into the whorled shell, then the meat must be pounded or spend time in a pressure cooker before simmering. Craig purchases cleaned local conch meat and offers the stew as a special every other week in the fall, mostly for locals. Even though the special comes and goes from the menu, the combination of food and memory is powerful. “I get mad when I call them and they say they had conch stew,” says Chad Guthrie, a member of the extended Guthrie clan who grew up in Salter Path but lives inland now, in Apex. “I say, ‘Why didn’t you call me so I could come on down there?’ ”

As is the case with many family-owned restaurants, The Crab Shack is facing challenges, from coastal development to young relatives finding work in other places. Craig can tick off the names of family-owned restaurants that have been sold over the years. He’s proud that his is one of the few remaining in Salter Path. The Crab Shack isn’t going anywhere, because Craig isn’t. “This is where I want to be,” he says. “This is my hometown.”