They arrive in Calabash from all over — locals and tourists trolling for seafood dinners, deep-fried and heaped high. They find plenty of it, too. The “Calabash style” has earned a devoted following in this shaded village tucked against the marsh grass and tidal river waters of southeastern Brunswick County. After their sizzling, salty shrimp, oysters, and flounder, diners ease over to Calabash Creamery for a chilled, sugary finish. Yes, the tiny town that calls itself the “Seafood Capital of the World” also has a sweet spot.

Two barnyard-size plaster cows, Scoop and Dip, graze in the parking lot to let the herds know they’ve come to the right place. It’s common to see customers’ cars bearing license plates from as far away as Maryland, Massachusetts, and Missouri. Eager guests can announce their arrival with the clang of a cowbell by the door. Inside, they’ll encounter a glass-top dipping cabinet with two dozen flavors.

“Oh, my gosh,” one visitor says — a typical reaction. “How do you decide?”

“We’ve stuck to true, old-fashioned, traditional American ice cream,” says Kristi Hansen, who runs the shop with her husband, Greg. “We still serve the nostalgic flavors that people grew up with.”

She means the familiar chocolate, vanilla, butter pecan, and strawberry. But Calabash Creamery also invites customers to try something different, such as black raspberry, banana pudding, or a pineapple/tangerine combination called Carolina Sunshine. “We experiment every winter,” Greg says. “That’s our fun time. Some flavors are born strictly by accident. A lot of our customers will put in suggestions, and we’ll try to run with those. Wintertime is when we get in the kitchen and say, ‘All right, what are we going to come up with? Let’s have some fun and make some ice cream.’ ”

That fun yields tongue-tantalizing results, among them Southern bourbon pecan, horchata, and salted caramel. Even the goof-ups yield delicious results. One employee who had intended to mix a batch of butter pecan mistakenly used a base of peanut butter before adding the pecans. Instead of tossing it out, Kristi suggested improvising.

“Well,” she said, “let’s throw some chocolate chips and peanut butter in there.” At the time, the song “Dirt Road Anthem” was playing on the radio, so they named the rich brown creation Dirt Road. “Basically, you take butter pecan and chocolate peanut butter, and you put them together,” Kristi says. “We make it every year.” 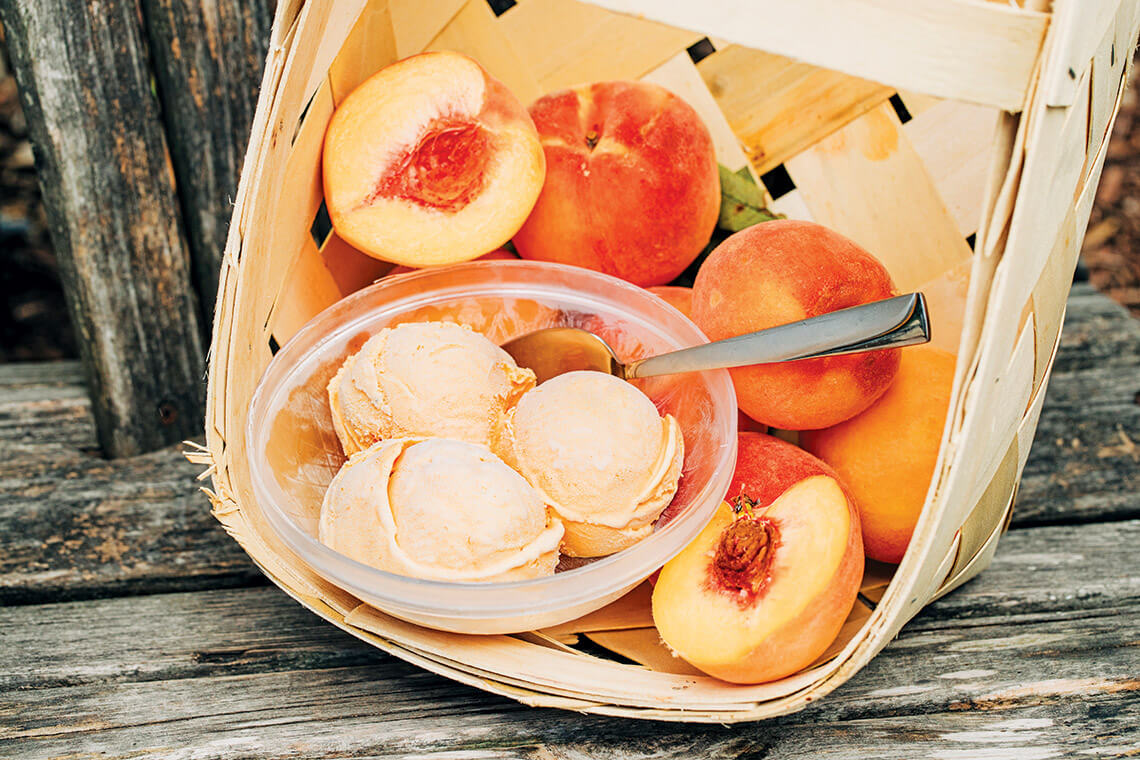 The store stays open year-round, churning out options that change with every flip of the calendar, such as cantaloupe in June, apple pie in September, and maple walnut in October. The Christmas season has inspired peppermint stick, eggnog, and red velvet cake. Some flavors pay tribute to the shop’s coastal home, like Sunset Peach and a white-chocolate-with-chocolate-cake-crunch concoction called Cow-a-bash Crunch.

“People look forward to it,” Kristi says of the seasonal switching. “They know they can get [certain flavors] only that particular month, so it keeps people coming in.”

When Greg thought about opening an ice cream shop with Kristi, his first move was to give her a way out, in case the business partnership hit a rocky road (pun intended). That was 18 years ago, when the Hansens were in their early 30s. Greg was making a career change after the sale of his family’s Calabash golf course, and Kristi was teaching elementary school. They had a 5-year-old and another kid on the way. They had never run a business as husband and wife. And they didn’t know much about making ice cream. “I asked nicely if Kristi would take a year’s sabbatical,” Greg says, “just to make sure that we could work together.”

The Hansens went away to ice cream college at Carpigiani Gelato University in Winston-Salem. In a weeklong course, they learned to make gelato, American ice cream, sorbet, and Italian ice. They returned to Brunswick County and gave their tentative arrangement a try, opening Calabash Creamery in July 2003.

“I knew all of my experience being in the classroom — the organization and dealing with the kids, the staff, and all of that kind of stuff — is what I was trained in doing,” says Kristi, who also had experience as a server and working events at a country club. “Greg had the business background, but I had the customer-service background.”

Now, the Hansens’ staff includes their three children — Alexis, Myles, and Emily — along with a team of chipper young servers who spend much of their time confirming for customers that what looks good in the dipping cabinet does, indeed, taste good. Besides ice cream, the shop serves banana splits, floats, sundaes, smoothies, and sorbets. Special-occasion customers go for ice cream cakes and pies.

After all these years, the Hansens’ initial hesitations are distant memories. Along the way, Kristi and Greg have learned that, yes, they can be spouses and business partners. “You have to have a desire to make this thing work to really make a go of it,” Greg says. “We do make a good team.”

With its covered porch, white picket railings, and rocking chairs, the 2,200-square-foot Calabash Creamery resembles a country house more than a business. An interior window gives customers a peek at the process. “They can watch us making ice cream,” Greg says. “As soon as they walk through the front door, they look straight into the creamery.”

The whole place carries an air of dairy: A pasture mural rolls across one wall. Playful-looking cows peer out from framed paintings. A bovine butler displays the specials. Serving sizes are called Calf (one scoop), Cow (two), and Bull (three). 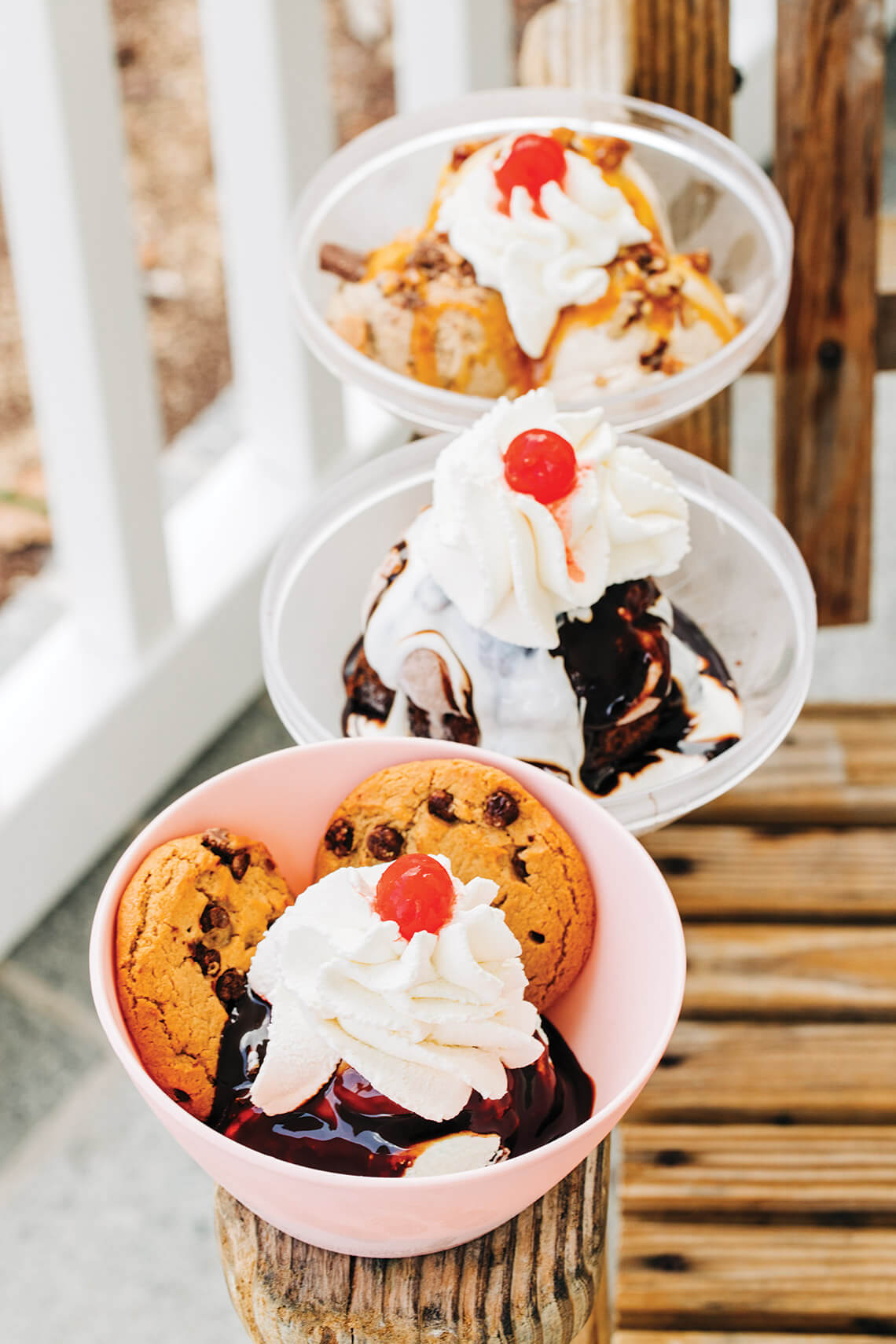 Anyone who’s determined to scream for ice cream can take the shop’s Kitchen Sink Challenge: a scoop of all 24 flavors, plus 20 toppings, plus whipped cream and cherries — one person, one spoon, one hour. Winners get the whole thing for free; failure means dishing out a cool $54.99. Nearly 20 people have succeeded, including a few YouTube “competitive eaters” who finished in a brain-freezing-fast 12 minutes.

Most customers, though, don’t want to rush through the pleasure. They take their ice cream out to the porch to rock under ceiling fans and watch the line of traffic oozing from Calabash to the nearby beaches: Sunset, Ocean Isle, and Myrtle. No one hurries. And why would they? After all, they’ve topped their seafood feast with a scoop (or three) of creamy sweetness. That’s a taste, and a moment, worth savoring.