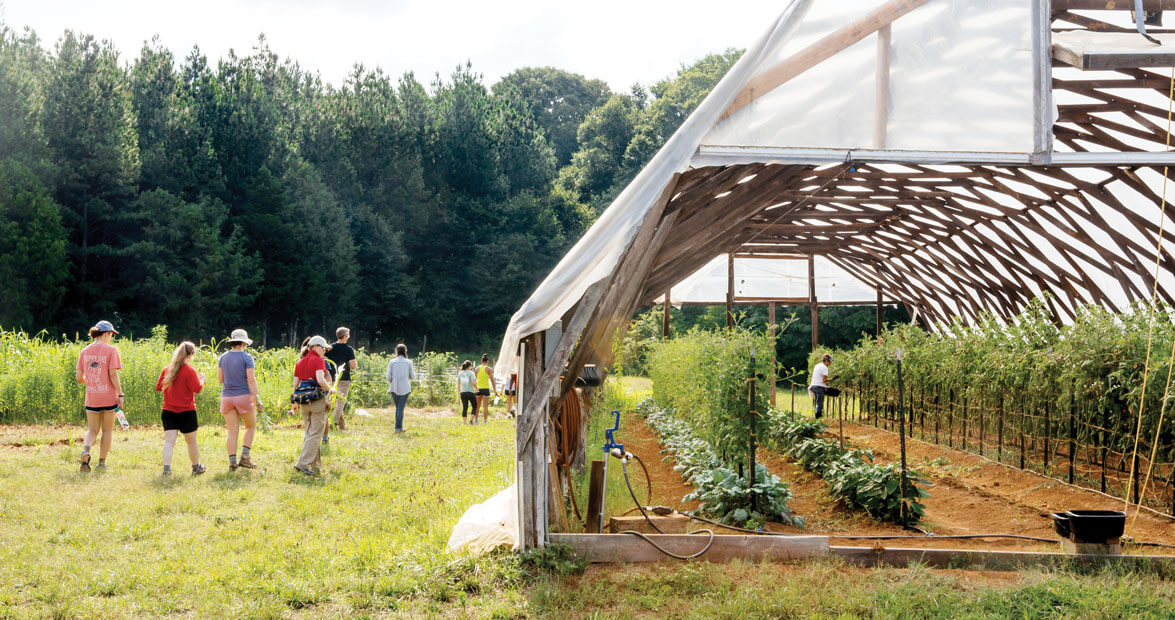 The tomato plant on Ben Street’s balcony in Charlotte was drooping. “It was pitiful,” he says, shaking his head at the memory. “It was like the Charlie Brown Christmas tree.”

That wilting tomato was a test case for Street, an aspiring farmer. Although farming had little in common with his day job as an international trader, that fact didn’t deter Street so much as inspire him. He’s a healthy guy: eats organic and exercises regularly. But no amount of nutritional or physical penance could forgive the health sins of his desk job. Farming would align his career with the food systems he supported and the active lifestyle he sought.

Enter Elma C. Lomax Incubator Farm, an organic farm in Concord that supports aspiring farmers by teaching them the business and offering enough firsthand experience to dispel any romantic notions of the job. It’s like an MBA program, but with soil.

Thirty acres of land, situated in a bend of the Rocky River, are divided into sections for each farmer. They start small, usually with four 50-foot rows. After mastering those — watering, weeding, harvesting, and marketing — they add a little more.

On his first day at Lomax, Street weeded bush beans by hand for about four hours. He kept coming back, volunteering to help farmers-in-training until he eventually became one himself. He worked at Lomax in the mornings, drove to Charlotte’s Steele Creek neighborhood for work, then returned to the farm on evenings and weekends. To save money for the full-time leap, he traded his Charlotte apartment for a camper, which — given his busy schedule — was just a place to sleep. Briefly.

Lomax has trained farmers for 10 years, but farmers aren’t the only ones who come to learn from this land. Last December, the farm expanded its mission and became the Elma C. Lomax Research and Education Farm, a living classroom for all ages. Children who have never been on a farm visit to learn about where their food comes from. Backyard gardeners hone their skills at weekend classes. People grow food for charities to feed the hungry. And still, future farmers learn the business of farming, from seed to sale.

“When you’re intimately involved in natural systems and you see those patterns play out on a seasonal basis, you start to care for those systems,” says Aaron Newton, the farm’s manager. “It affects how people take care of each other and the environment.”
During a field trip to Lomax, one boy declared his hatred of tomatoes. A little while later, Newton spotted him eating a tomato from the vine. Then another.

Maybe the tomato will just be a tomato to that child. Maybe it will spark an interest in local food, or an interest in growing food. Maybe that boy will grow up to be like Ben Street, who now runs Street Fare Farm in Concord, which supplies Charlotte restaurants like The Asbury, Yafo Kitchen, and 204 North. After all, sometimes a tomato — even a sad, drooping one — can be the first step to a new life.