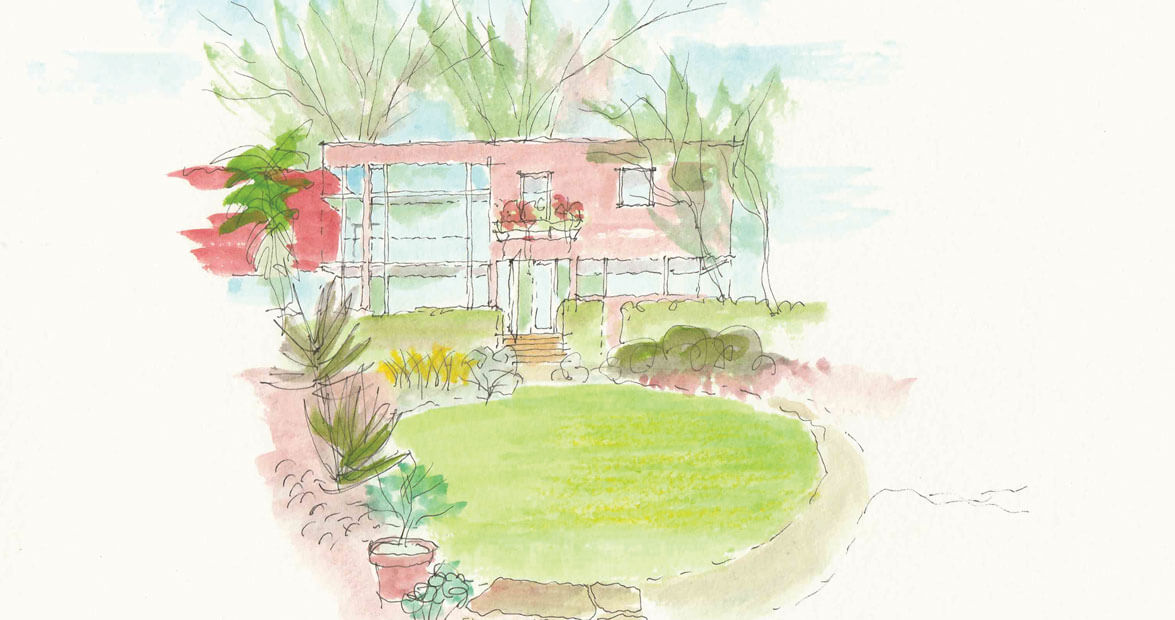 Stroll through Triangle-area neighborhoods developed in the 1950s, and you’ll see Cape Cod and Colonial Revival houses — and, of course, plenty of ranch homes featuring neat lawns and trimmed hedges. Occasionally, you may spot a house that’s a bit out of the ordinary: a mid-century modern gem, half hidden among the trees, with a flat roof, large windows, and an entrance partly concealed by the forest.

As a young architect, I was weaned on mid-century modernist architecture. When I left Greensboro in 1959 to study at NC State’s school of design, buildings like the Matsumoto house and Dorton Arena were a revelation.

The Piedmont’s wooded hills are dotted with more than 800 low-slung, asymmetrical dwellings, each house intimately related to its own little patch of North Carolina. The designs are individually unique and not part of any recognizable style. Because of these relatively modest houses, the state became well-known in the national design community.

Since I grew up admiring modernist houses, I’m very happy to see a renewed interest in buildings that are informal, carefully crafted, and open to the North Carolina sky. If modernism can be thought of as a tree with many roots, I’m glad to see its branches spreading. 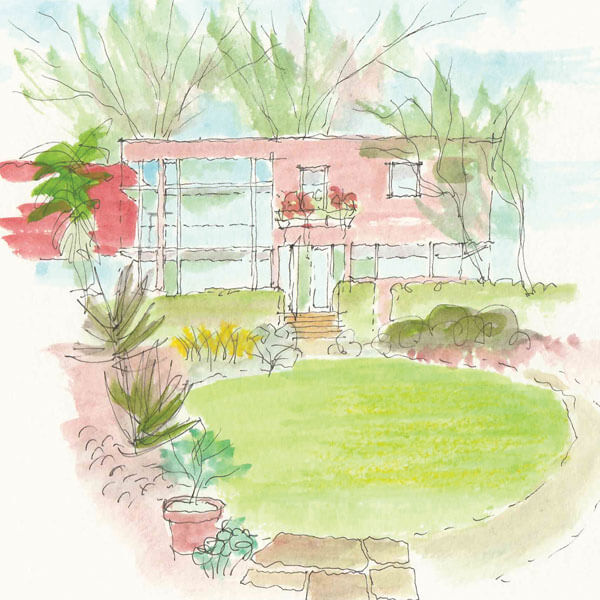 Large windows are characteristic of all modern architecture.

Insulated float glass (made using a method that gives sheets of glass a uniform thickness and very flat surfaces) became economical after World War II, so architects were eager to use it.

The windows in our house reflect the colors of nature and the path of the sun without imposing on either. They bring daylight in on three sides of every room, which makes the house seem a part of the gardens that surround it.

On clear evenings, moonlight floods the living room. In the winter, the fireplace alcove across from a large window seems especially cozy when it contrasts with a cape of freshly fallen snow visible outside.

At 1,800 square feet, our modern house is relatively small, but the walls of glass make its interior space seem generous far beyond its size. 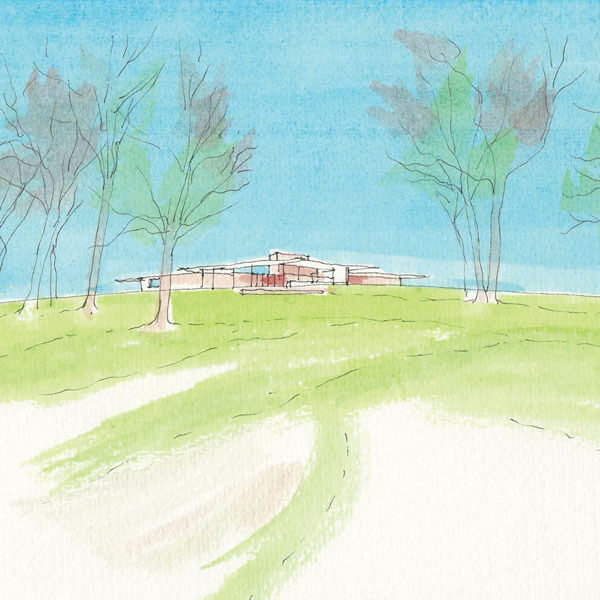 The natural qualities of a site often informed the design of a mid-century modernist house. James Fitzgibbon, for example, designed the Paschal house to hug the crest of a south-facing hill on what was then the outskirts of Raleigh. A professor at the NC State school of design, Fitzgibbon gave the house, which was razed in 2013, a low-sloping roof with deep overhangs that paralleled the slope of the hillside. The house faced south to receive sunlight, and its many windows opened to the breezes that swept up from the valley below. It seemed at home on the hillside.

In contrast to the open, hillside-facing windows, Fitzgibbon grounded the house with a massive, quarried-stone fireplace that recessed into the floor.

The house’s street-facing side was modest — almost self-effacing for such a substantial residence. The roof’s low peaks resembled hills. A broad porte cochere invited visitors into a quiet atrium.

Although the house was torn down, the ideas it spawned remain very influential. 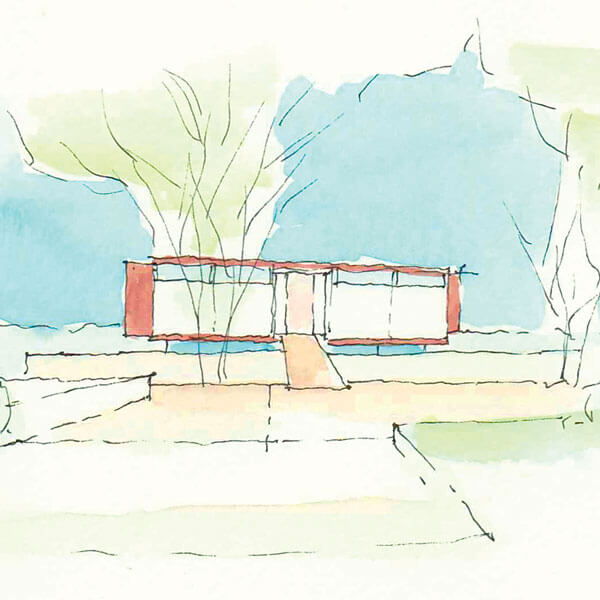 Mid-century modernist architects used flat roofs for practical and aesthetic reasons. For George Matsumoto, another professor at NC State’s school of design, it was the most appropriate roof to shelter his family — himself; his wife, Kimi; and their four children. A 1,200-square-foot house he designed stood beside Beaverdam Creek on a small, winding road that was, at the time, on Raleigh’s northern edge.

Matsumoto’s goal was to use materials economically. The 4-foot-by-8-foot panels of plywood and cement asbestos, for example, were designed to be installed without cutting. The flat roof was in keeping with his design ethic: no wasted space or materials for an attic, and a horizontal roofline that he thought was quietly appropriate in his home’s woodland setting.

Like many modern architects, Matsumoto left wood and concrete block in their natural state. But he assembled these modest, unpainted materials with scale, harmony, and proportion in mind. As a result, the house embodies the simplicity and grace of a traditional Japanese home, yet it is unmistakably modern.

Matsumoto also designed his house to be naturally cool in summer. The flat roof reflected heat, and most of the rooms opened to a screened-in porch overlooking the creek. Thus, each room could be an open-air pavilion on fine days.

Within two years of its completion, this modest dwelling on a small road in Raleigh was admired by design enthusiasts from Seattle to Paris. 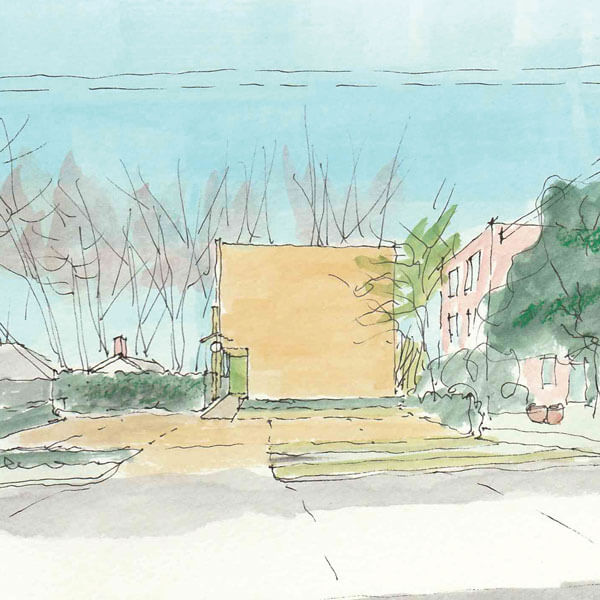 When this building was completed, many people weren’t sure what to make of it. Was it an office? A drawing studio? A residence? In fact, it was all three, designed by architect Harwell Hamilton Harris in 1968 for himself and his wife, Jean.

Modernist architects enjoyed designing new building types. For Harris, the challenge was to create a quiet place in which to live and work among the run-down student houses and apartment buildings on Cox Avenue near NC State University, where he was a professor.

In contrast to the scruffy street, Harris built a serene stucco box that caught the shadows of the day.

Crossing the bridge into the house was like going to California — not glitzy Hollywood or smoggy Los Angeles, but the verdant, flower-flecked California of the architect’s youth. Inside, soft light suffused the rooms through translucent windows. “If you stand next to a translucent window,” Harris once said, “you can imagine you’re at the Pacific Ocean.” It didn’t matter that dumpsters and old pickup trucks were outside. One window, 20 feet tall, overlooked the Harrises’ private garden court and nearby Pullen Park.

Harris was admired by many architects, including Frank Lloyd Wright and Frank Gehry, but his house was modest. He believed that a house was a reflection of its client. If so, this was a portrait of a kind and gentle man who found a piece of leftover land and turned it into a secret garden.