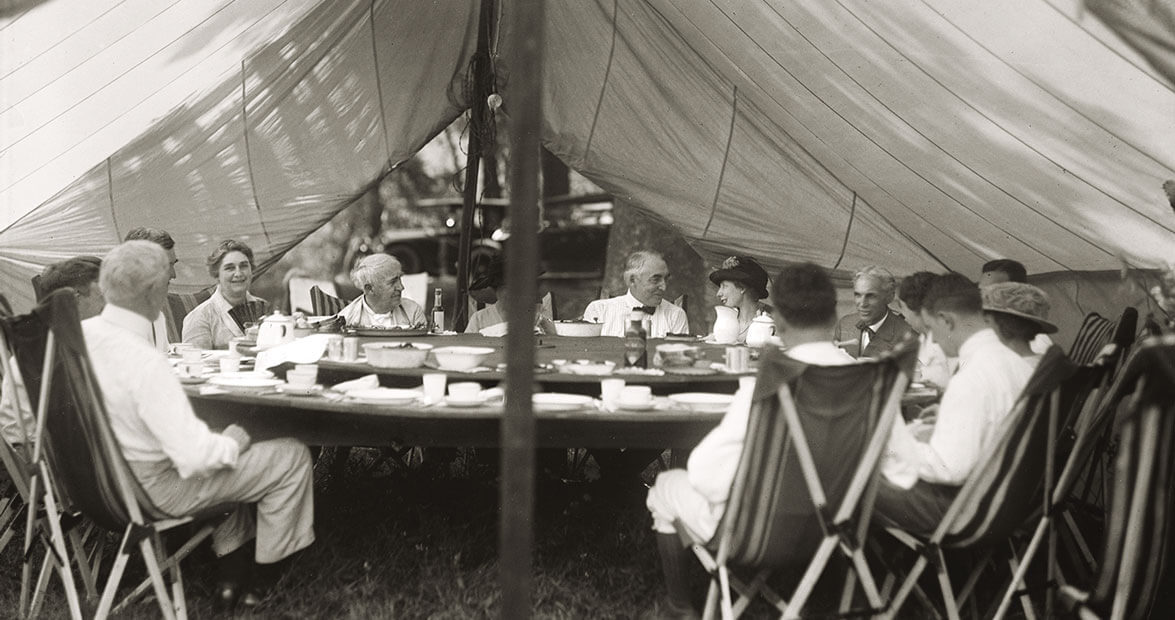 Thomas Edison rode shotgun, a compass on his knee to navigate the day’s route. Henry Ford got dibs on driving, for obvious reasons. Plus, he was the best mechanic of the group, which came in handy on the rooty and rutted dirt roads they traveled through the Smokies. In the backseat, Harvey Firestone, the rubber and tire magnate, read poetry aloud — the car radio not yet standard in a Model T — while the famous naturalist and writer John Burroughs sat back, watching the North Carolina countryside unfurl at 18 miles per hour, his long white beard barely stirring in the August heat.

Nearly every summer from 1915 to 1920, these friends — calling themselves “the Four Vagabonds” — embarked on an epic camping trip through a scenic American region. They commanded the lead car in a mighty caravan, sometimes stretching 50 vehicles, all packed with essentials for a civilized stay in the woods: large, monogrammed canvas tents; tables and chairs; an enviable library; fishing and hunting gear; and enough household amenities to run an inn — or, in their case, a campsite. 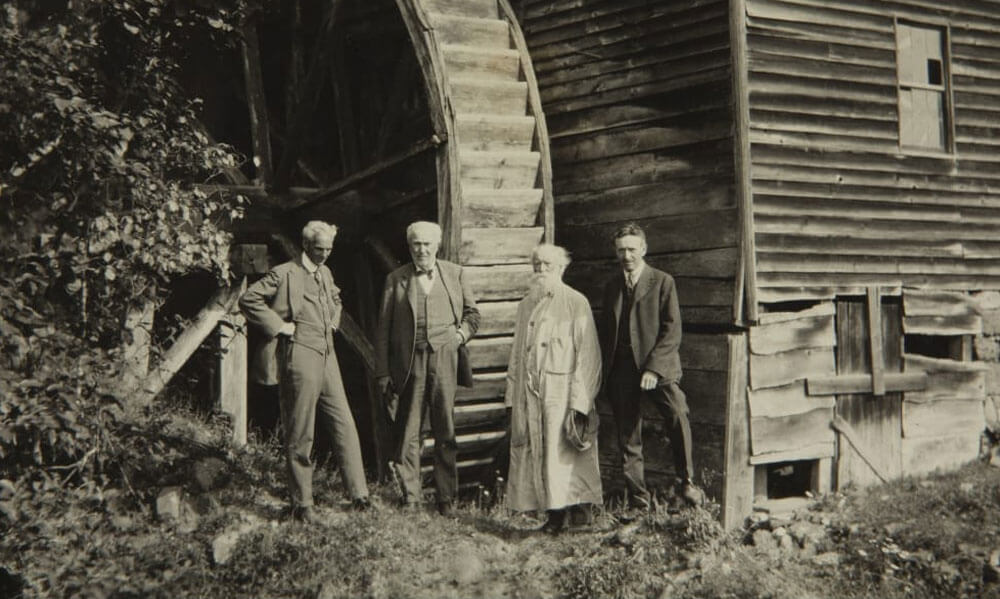 The Vagabonds in western North Carolina on their camping trip in 1918: (from left) Henry Ford, Thomas Edison, John Burroughs, and Harvey Firestone. photograph by THE COLLECTIONS OF THE HENRY FORD

“It often seemed to me,” Burroughs later wrote, “that we were a luxuriously equipped expedition going forth seeking discomfort.” If they found any in 1918, on their Appalachian jaunt from Pennsylvania to North Carolina, they didn’t let on. A film crew, brought along to document the journey for newsreels, captured them living it up. Which was, in part, the point. This was the dawn of a new form of recreation: car camping. The industrialists, whose inventions made the trend possible, believed that modern conveniences could actually bring folks back to nature, at a time when so many were trading in rural life for cities. And if Burroughs, who once called the car a “demon on wheels,” could embrace the idea, the possibilities were endless.

As a pastime, camping certainly wasn’t new. But as state parks popped up, middle-class people began camping on weekends and for vacation like never before — not with a staff of bow-tied servants, like the Vagabonds did, but with cots and linens just the same, plus cooking kits, sketch pads for botanical drawings, and novels to read by the fire. “It was very popular between 1880 and 1930. That was the golden age of camping,” says Wayne Williams, a professor emeritus at Appalachian State University who taught recreation and park management. “Model Ts were built so that you could take bolts off and add camper tops and tents to the side.”

Williams and a group of like-minded, old-style campers called the Acorn Patrol gather in state parks several times each year to re-create different types of campsites from this era. They dress the part, but, more important, they live it — pitching canvas tents, sleeping on sheepskin-padded cots, steeping sumac pods for tea, and cooking over a campfire. 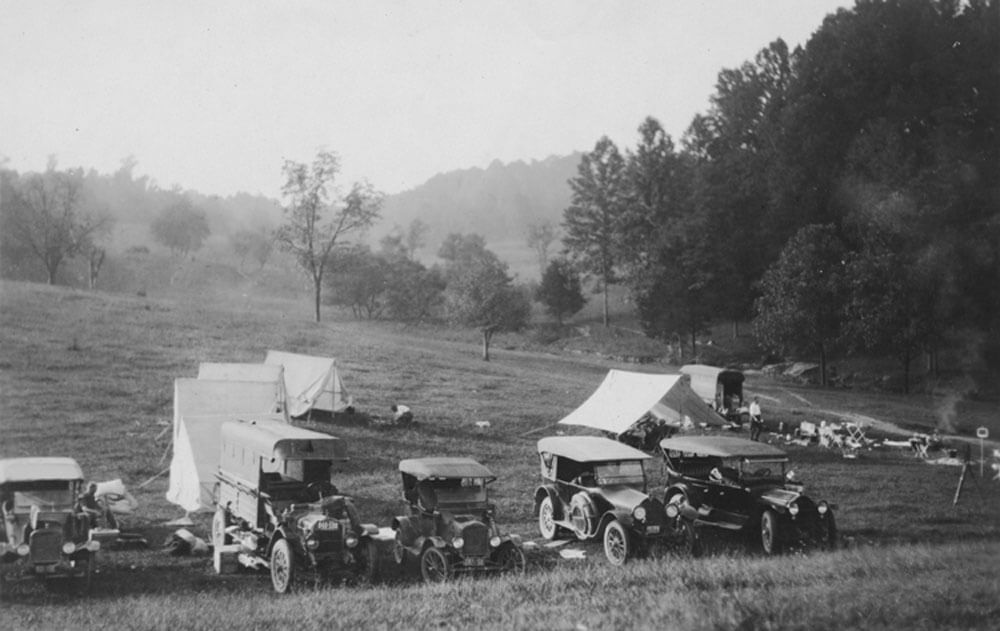 The Vagabonds hiked and explored the regions they camped in, occasionally staying in local farmers’ fields, like this one in Tennessee.

“In a lot of ways,” Williams says, “the way we camp is more comfortable than modern camping.” But that’s not the only reason he does it: “It’s a connection to history and to people, really.” The chance to cook a Dutch-oven blueberry pie outside, for instance, and to share it. “Sitting around a campfire allows you to focus on conversation,” he says. “I think we lose a lot of that in our culture.”

Over a tent dubbed the “Macke Mansion,” a Victrola warbles an oldie, while the lady of the tent, wearing her suffragette sash, sits in the shade of a raised tent flap, sketching a leaf. Jennifer Mancke and her husband, Tom, are members of the Acorn Patrol and have come to this gathering in Pisgah Forest bearing all the trappings of a middle-class campsite — the kind, say, a 1918 shopkeeper couple might share.

In the same clearing, hemmed in by a split-rail fence, all sorts of campsites are taking shape: There’s a roomy wall tent, a few modest and sturdy Whelen tents, and several taller wedge tents, the kind sportsmen preferred. Williams can stand in his, and there’s room to store his cookery and bamboo fly rod, and to neatly hang his clothes. “My hat,” he says, feeding the campfire another log, “makes a good bellows.” 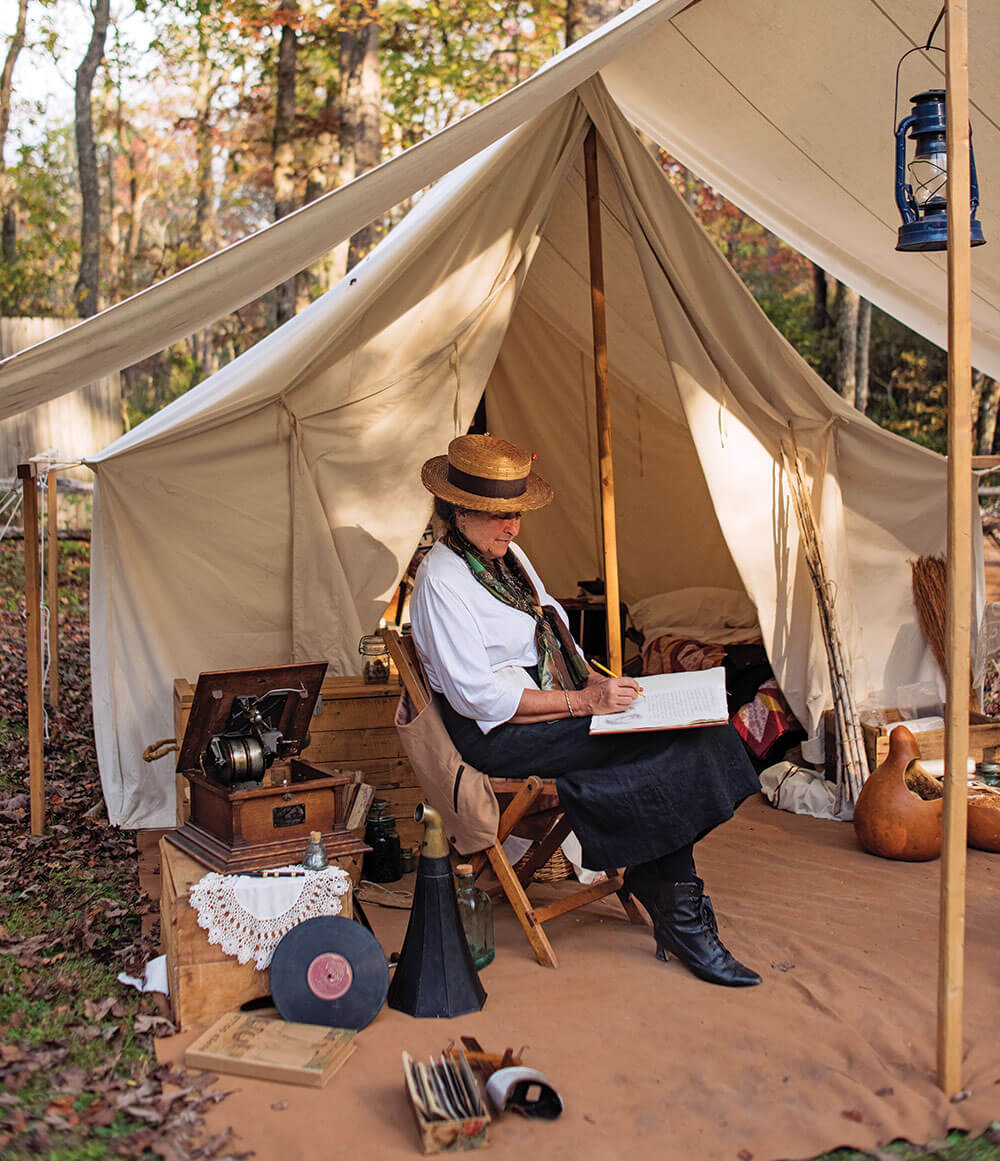 A Victrola, a sketch pad, and a stereopticon viewer provide camp entertainment for Jennifer Mancke, a member of the Acorn Patrol. photograph by Jack Sorokin

The group has gathered on the Biltmore Campus Trail at the Cradle of Forestry, near where George Vanderbilt and a large party camped in 1901. Archival photos of that expedition show gentlemen in derbies and stylish women in long skirts expertly sidestepping brush and chatting among chest-high wildflowers. The Manckes would have fit right in.

Tom Mancke, in real life a naturalist and teacher, demonstrates making a friction fire with a spindle fashioned from dry yucca stalks and a bow drill made from a bison rib and buckskin. When a tendril of smoke finally rises from its nest of cattail fluff, he cups a handful of pine straw around it and blows until his forehead reddens. Smoke beards the lower half of his face, and then, suddenly, an orange glow appears. Fire. From this one primitive skill, everything else follows.

Preserving survival skills, like fire-making and foraging, is central to the Acorn Patrol’s mission. Horace Kephart, the North Carolina writer who helped establish Great Smoky Mountains National Park, is the patron saint of the group. His 1906 tome, Camping and Woodcraft, influenced the research and teaching of Acorn Patrol founders Steve Watts and David Westcott. Watts, who died two years ago, was a renowned expert in primitive skills and worked for decades with the Schiele Museum of Natural History in Gastonia. (The depth of Watts’s knowledge is on display in the movie Cast Away, in which he and Westcott created survival strategies for Tom Hanks’s character.) Watts’s colleague for more than 30 years, Suzanne Simmons, remembers learning “to cook grasshoppers on hot rocks” with him on their early outings. “Steve used to say, ‘If someone doesn’t know the story of a skill and how to apply it, then it’s just arts and crafts.’” 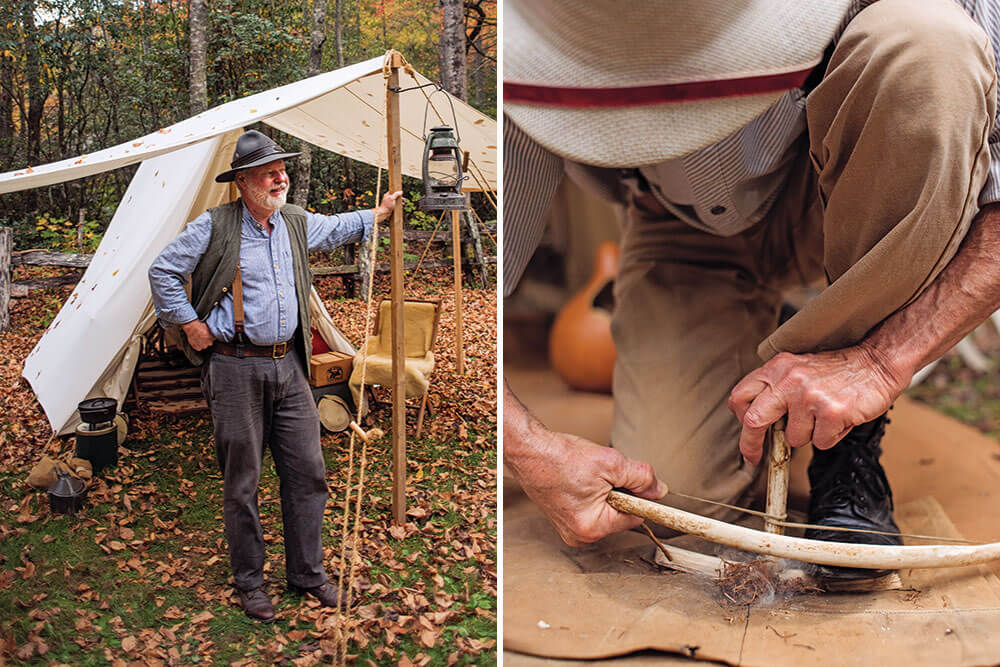 Just as it was a century ago, a wedge tent (left) is roomy and durable. ASU professor emeritus Wayne Williams keeps a kerosene lantern hooked to his. At Tom Mancke’s campsite, a bow drill is put to good use. Both were vital in camping’s golden age. photograph by Jack Sorokin

Simmons’s campsite replicates the setup used by pioneering women campers, those early naturalists who relished the freedom to be resourceful and resilient in the woods. “I’ve done my share of backpacking in the 1980s style, but there’s something about this — it’s romantic and rustic,” she says. “It harkens to a simpler time, a more relaxed pace.”

But Simmons is quick to point out that it was very much a social experience, too. “Camping somewhere, you would get to know the community by trading with the farmers for food,” she says. That’s how the Vanderbilts’ camp cooks got their provisions. It’s also how George Vanderbilt got acquainted with his distant neighbors, the farmers and woodsmen who lived around his 180,000-acre estate. Reforestation, timber rotation, soil erosion — all of these topics Vanderbilt bandied about with locals while camping. A trusted friend, local woodsman Ulysses Grant William Reeves, characterized the tall, erudite Vanderbilt as “a carefree, happy camper,” telling a local newspaper reporter, “Sometimes he’d take a book and go out in the woods, put his back against a tree trunk and spend hours reading.”

“I knew it was a risky thing for an octogenarian to go a-gypsying,” Burroughs wrote of the Smoky Mountains journey. “What did I need of an outing? All the latter half of my life has been an outing, and an ‘inning’ now seems more in order.”

Writing in his journals, Burroughs bemoaned the hectic pace of modern life. For the Vagabonds, these excursions were meant to be an escape from the pressures of genius: Edison liked to read beneath the trees. Ford goaded his companions into physical contests. Burroughs led nature walks, identifying birdcalls and plant species. At night, Edison cranked up a portable generator of his own invention to illuminate the campsite with lamps. Even so, the evenings would end, as they have for ages, with friends gathered around a campfire, hashing out bold ideas and sharing long silences. 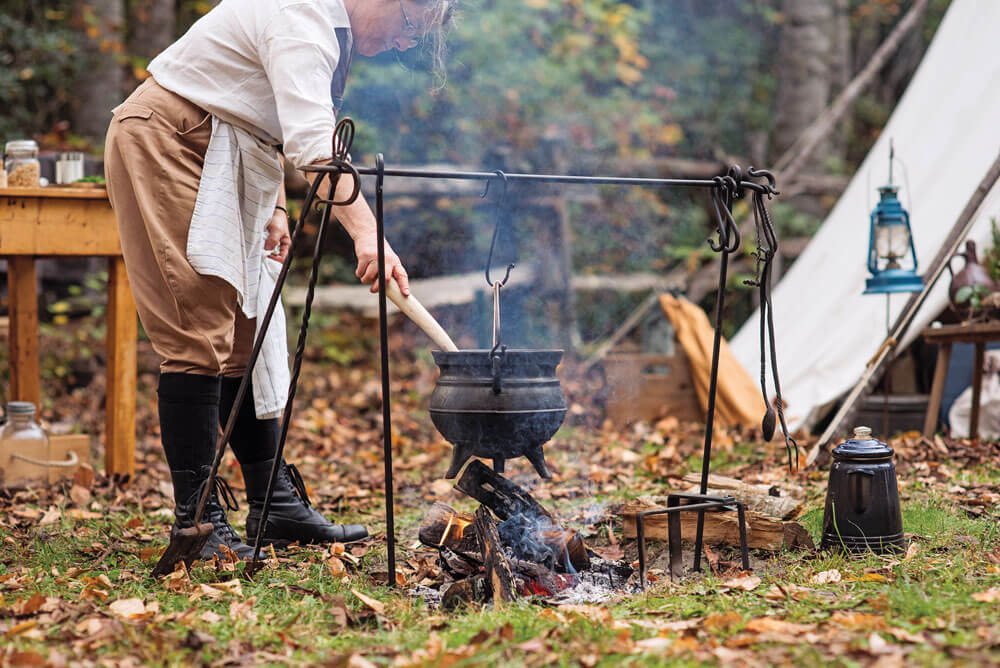 In the daylight, it was harder for the Vagabonds to escape their fame. The retinue added a full kitchen car, which Burroughs called “the Waldorf-Astoria on wheels,” and a player piano. Soon, their families wanted to come along. And U.S. presidents. The country roadsides thickened with well-wishers and waving fans, and the Vagabonds made headlines everywhere they went. Their adventures had popularized a new way to experience the great outdoors. And as a marketing tool to sell cars and tires, and even charcoal for camp cooking — Ford ran a promotion for his cousin-in-law, a man by the name of Kingsford — it was a wild success. But Firestone complained that the trips had become a “traveling circus.” After Burroughs died in 1921, the trio camped together only three more summers.

For the Acorn Patrol, Watts’s legacy inspires them to continue working to preserve the skills and spirit of early American camping. It’s hard not to think of Watts at the Cradle, Simmons says, where he discovered an ancient apple tree on the group’s first campout there. Gathering wild apples to sweeten sausages and onions blistering in a campfire skillet brings him back, if only in memory. “Some years, the tree produces. Some not,” she says with a sigh. “But it’s such a gift, harvesting from that tree. All of this, a total gift.”