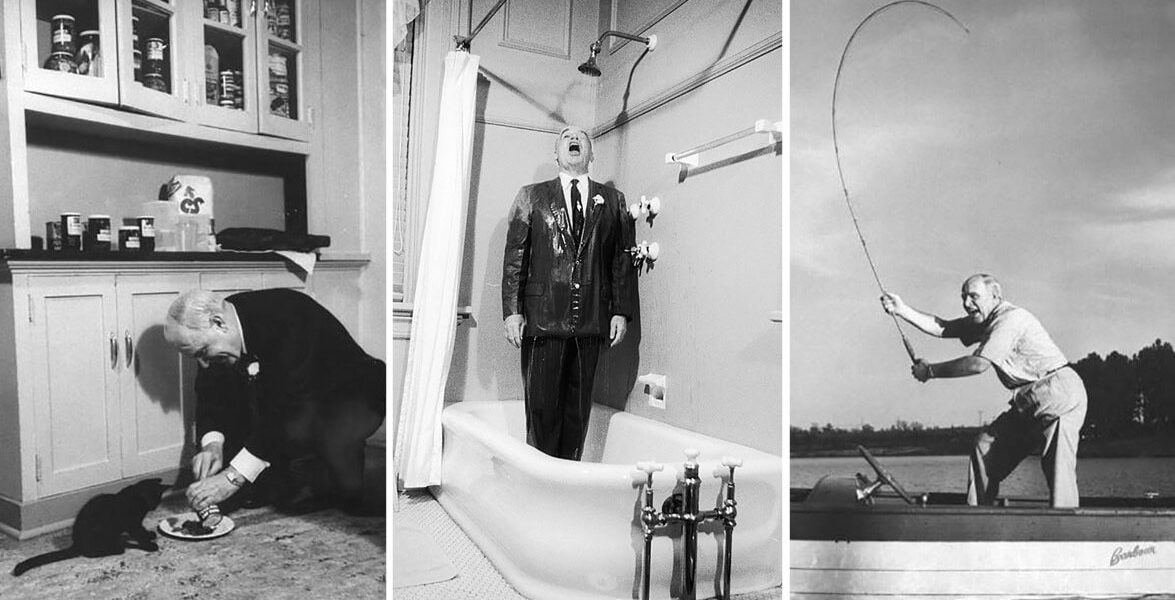 In a Life magazine article from September 24, 1956, the country saw Gov. Luther H. Hodges, the straitlaced head of North Carolina’s executive branch, showering. In a suit. “He Showers Praise on Tarheel Wares,” the headline read. Punny! The story goes on to talk about how North Carolina was the most industrial state in the largely nonindustrial Southeast. But things could be better, and to prove that North Carolina was the place where even more stuff could be made, Hodges acted a fool.

So, there’s the suit thing: He showered in it because it was made of quick-drying fiber created in North Carolina. In another picture, he dishes out cat food made from Beaufort fish scraps. He fiddles with locally made clothespins. He grins over Charlotte-made “Lazy Laces,” created with elastic to allow people to remove their shoes without untying them. He snags a local fishing lure on his pants while casting a line. There’s headache powder from Durham, VapoRub from Greensboro, and locally woven sheets and blankets. He models underwear, proudly pulling up a pair of skivvies manufactured in Asheboro. Through it all, he’s mugging hard, like an extra in a movie who overacts in an attempt to upstage the stars.

I have no idea if this paid off, but under Hodges, the economy was humming along, buoyed by the postwar boom. Factories opened. Research Triangle Park was established. Hodges himself had been a business executive at Marshall Field and Company before holding office, and later served as U.S. Commerce Secretary under Kennedy and Johnson. And it’s clear from the Life story that he knew how to get attention as a businessman. He “usually showers with his clothes off,” the article stated — buddy, don’t we all — “but Governor Hodges is a man with a mission and to further it he is perfectly willing to indulge in a little gubernatorial horseplay.”