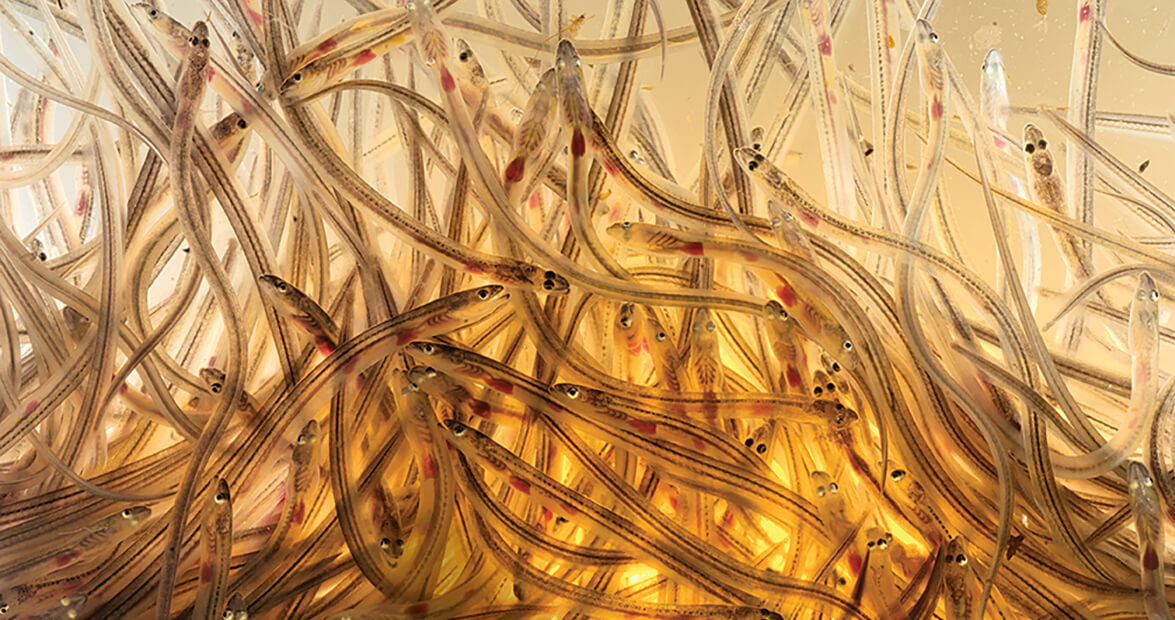 You wouldn’t see them if you weren’t looking, and few people know to look. And let’s be honest: Not many people go on the hunt for one of the least understood, most underappreciated, and downright slimiest creatures on the planet. But on late spring nights and for weeks on end, they’re out there, from one end of North Carolina to the other: Eels. Millions of them.

One of the most impressive migrations in the animal kingdom takes place, in part, in the waters of most North Carolina rivers, creeks, streams, and ponds, and it’s happening right now. Eels, fresh from the sea, are streaming up our waterways. Some creeks are home to just a few. Others, to tens of thousands. It’s like wildebeests streaming across our own watery Serengeti. Sort of.

Actually, at this point in their life cycle, it’s not so easy to tell that these are even eels. These juveniles are perhaps two to three inches long, and are nearly transparent, hence the name “glass eel” for this adolescent life stage of the American eel. In the strong beam of a flashlight, you can see two bead-like eyes, a thread of internal organs, and a tiny heart. They’ve hatched from eggs laid far out in the Sargasso Sea, more than a thousand miles and many dangers away. The fact that they’ve made it this far is a miracle. The fact that they have so far to go is many miracles in waiting.

American eels are North America’s only catadromous fish, which means they spawn in the open ocean, then travel to fresh water to mature. In the weeks to come, the glass eels will darken into “elvers,” then grow into “yellow eels.” Much later — 10 years, 20, half a century — the yellow eels retrace their route, from farm pond to creek to river to sound to ocean, and then back to the Sargasso Sea. There, they will spawn and die.

But for the next month or so, as water temperatures rise, unfathomable numbers of glass eels will enter North Carolina rivers and head incessantly upstream. They can climb wet spillways and navigate swamps. They will swim till the water runs out, then wriggle across wet meadows until they find moving water again. Likely as not, they’re in every river you drive across, every creek, every little trickle along the greenway.

If this is all news to you, don’t feel bad. The remarkable appearance of eels has stumped some of the world’s most impressive minds. Aristotle figured the creatures sprang spontaneously from mud. Did they spring from horsehair that fell into the water? A lot of folks thought so, back in the day.

But once you know a bit about the truly astonishing migration of eels, from a whirling, grassy gyre far off in the Atlantic, through creeks that run under interstate highways, over pond dams and past impoundments, you might be inspired to do a little eel-watching of your own. It’s pretty simple. Just grab rubber boots and a flashlight. Plot out a trip to a nearby spillway — a neighbor’s pond, for example, or the lake at the town park. Glass eels will climb even vertical surfaces as long as there’s enough moisture. They’ll creep up wet moss and shimmy along cracks in the concrete. Look carefully for wispy, jewel-like ribbons that glint in the light. Find one, and you’ll likely find hundreds. Then marvel at how delicate they appear, little slivers of translucent flesh, like jellied winks of light, a thousand miles from home.