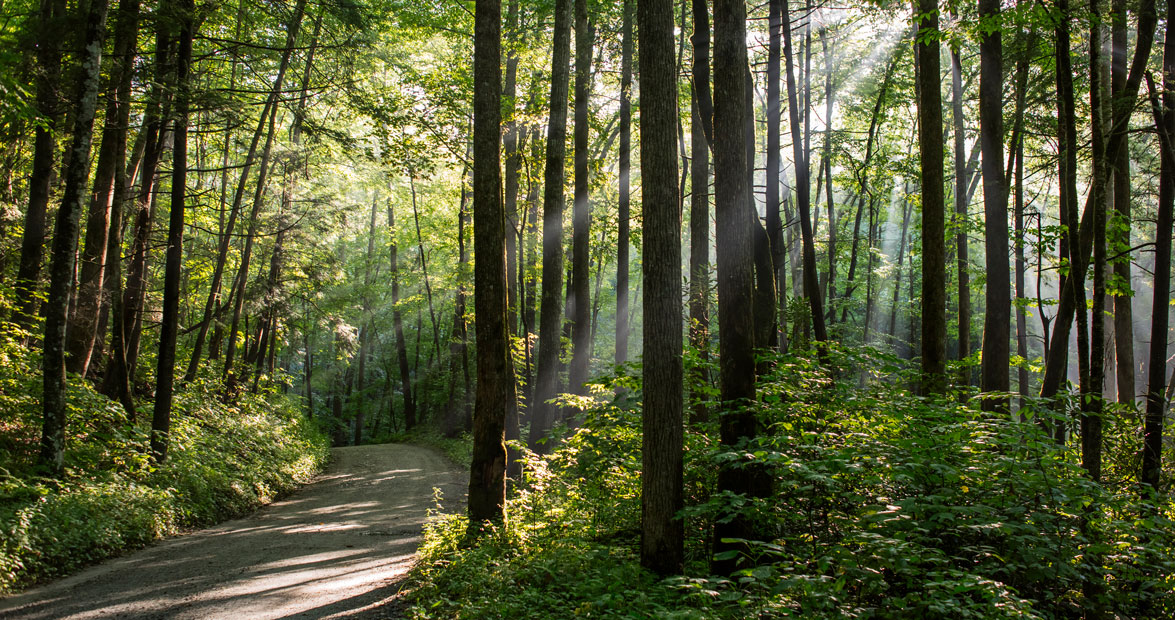 The approaching winter chilled the air, and a hint of yellow dappled the leaves as my husband and I headed down Heintooga Round Bottom Road — a rugged, 14-mile, one-lane road that follows an old rail bed deep into the Smokies. After rounding a few curves, He cut the engine of the car, and the sounds of the forest rushed in — the gurgle of a cascading stream, the cry of a raven, the soughing of wind through woods thick with birch and beech, maple and oak. A sense of timelessness engulfed us.

For Jack Campbell, who worked 45 seasons as a ranger in Great Smoky Mountains National Park, this rustic forest route on the eastern side is his favorite in North Carolina — a treasure, he says, because “it gives people who cannot hike an opportunity to see a backcountry area.” 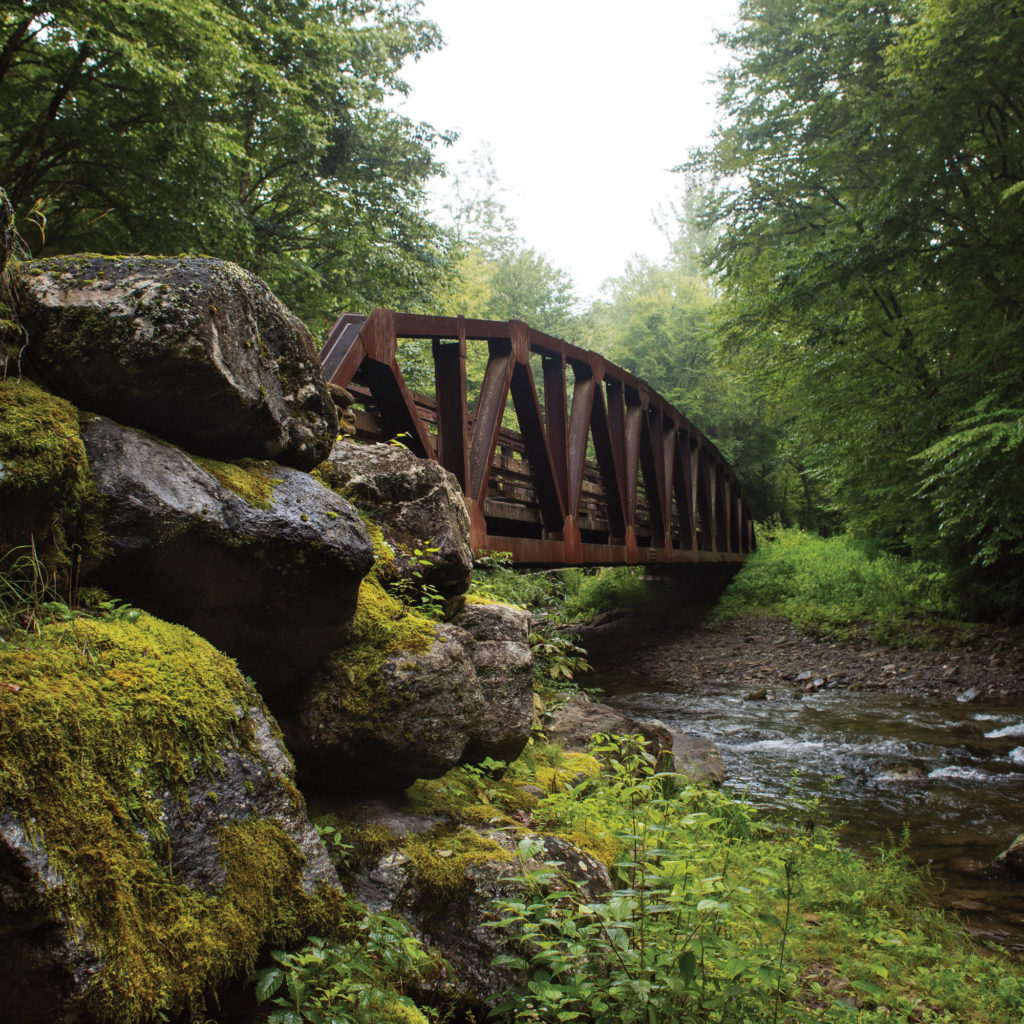 A bridge about two-thirds of the way down the road crosses Bunches Creek, and marks a good spot to stop and explore. photograph by Jack Sorokin

On either side, trees stretch thick and lush, hiding the forest’s secrets. Occasionally, a black bear or elk will venture out. Once, Campbell spotted a cougar. Golden-crowned kinglets, Canada warblers, and other nesting birds fill the branches in spring. Wildflowers cover the ground: purple asters, harebells, showy bellflowers, jewelweed, bee balm. Come winter, the road closes, too dangerous to navigate in snow and ice.

Reaching this road-less-traveled is part of the adventure. Turn off the Blue Ridge Parkway at Milepost 458.2, not far from Maggie Valley, and follow a paved two-lane road for about nine miles, until the pavement turns to dirt and gravel. From there, Heintooga Round Bottom Road gradually descends 2,000 feet over 14 miles before ending near the Qualla Boundary, home of the Eastern Band of Cherokee Indians. The park service estimates that each year, about 50,000 people venture down the road, which is open from mid-May until the end of October and is listed on some maps as Balsam Mountain Road.

“Part of my duties were to drive that area,” Campbell, 83, recalls. “I’d make three to four trips a week. I never got tired of it. I like the scenery, the privacy, the flowers, the animals.”

Cherokee Indians remained here, in the vast wilderness of their homeland, to avoid being forcibly moved by President Andrew Jackson to lands west of the Mississippi in the 1830s, a journey known as the Trail of Tears. The Cherokee had a word for this hiding place: Iyentooga, from which Heintooga took its name.

Although the land is now part of the national park, Richard Sneed, principal chief of the Eastern Band of Cherokee Indians, says the mountains protected and provided for his people for many years. “Our hearts are connected to this place,” he says.

Even if you don’t want to navigate the dirt road, there’s a lot to see on the way to it. About three miles after turning off the Blue Ridge Parkway, you’ll reach the parking lot for the Masonic Monument at Black Camp Gap, near the entrance to Great Smoky Mountains National Park.

A little farther along is Balsam Mountain Campground, at 5,310 feet the highest campground in the national park system east of the Mississippi, where Campbell and his family spent the summer of 1969 and then every summer from 1997 until 2012.

“It’s totally quiet,” Campbell says. “You stand out there and you hear your heartbeat.”

Their first summer at Balsam, the Campbells lived without electricity. Diapers and sheets wouldn’t dry in the cool mountain air, so once a week, Sue Campbell drove with their three small sons 60 miles round-trip to shop for groceries and wash clothes in Waynesville.

“I grew up in the city of Knoxville, and I could walk to school, to the stores, to the movie theater,” says Sue, 79. “It was an entirely different experience to be out in the wild. Sometimes it would be foggy, and the road had the most beautiful, ethereal look. Jack would walk ahead and it would just look like he was disappearing into the fog.”

Half a mile past the campground, the Civilian Conservation Corps built a picnic area in the 1930s as part of its work-relief program during the Great Depression. Many large stone tables remain, and — as Jack Campbell puts it — they are so heavy that they’ll likely be there for a long time to come.

From the picnic grounds, a short walk along Flat Creek Trail leads to Heintooga Overlook. “You’re looking due west, and you’ve got gorgeous sunsets,” Campbell says. “People will be out there and it becomes totally silent. You may hear a coyote way down or an early owl.” 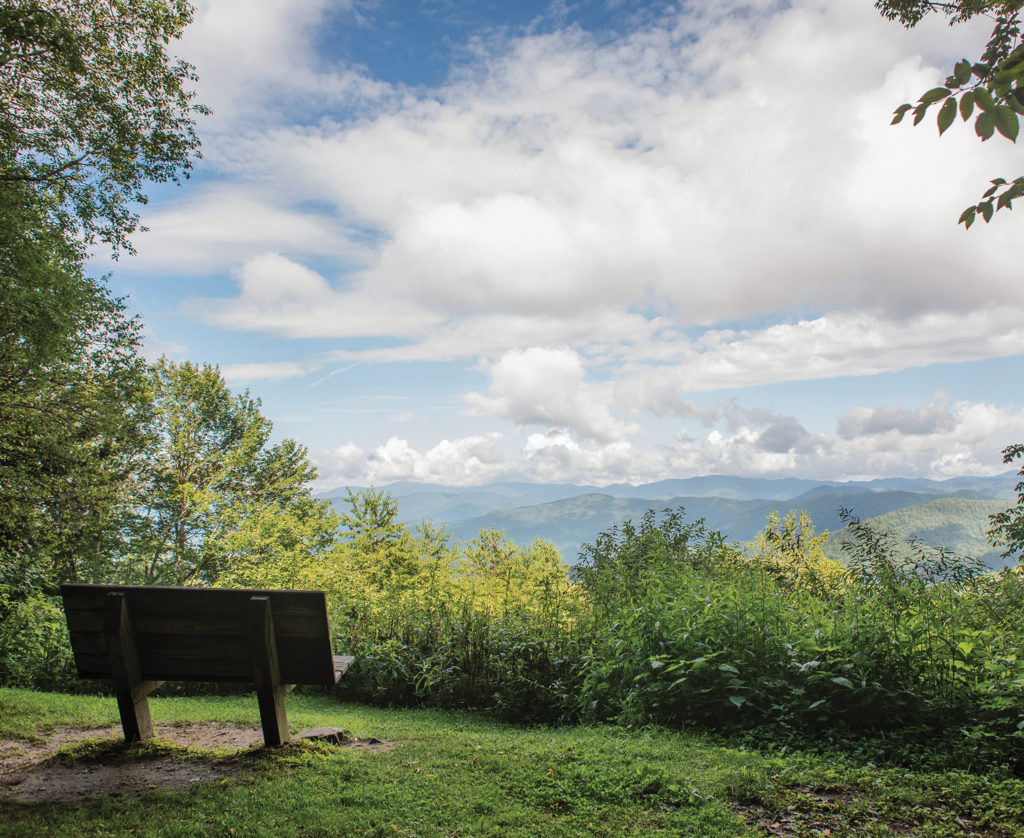 Heintooga Overlook offers a panoramic view of most of the park’s distant peaks, from Clingmans Dome at the far left to Mount Guyot on the far right. photograph by Jack Sorokin

For many years, locals drove from miles around to spend Sunday afternoons there.

“Let’s go back into the late ’40s, or into the ’50s, prior to air-conditioning and shopping malls and television and all that,” Campbell says. “That area provided the best air-conditioning.”

Janice Wright grew up going to Heintooga Overlook. She says her mother would wake early, kill a chicken, dress it, and fry it, and then they’d set off on the two-hour trip from Cullowhee. Her parents rode in the front of a pickup truck, and Wright and her seven brothers and sisters piled into the back.

“It was very special for us,” says Wright, 70, who now lives in Sylva. “We had a big family and couldn’t go many places. But you could go driving on Sunday afternoon.”

We drove partway in on the next-to-last day of the season and saw only one other group: several boys and their father on mountain bicycles, gliding down the gentle grade, followed by their grandfather in a car.

“That road was the old railroad grade for that side of the mountain,” Campbell says. “They would back that train up the mountain — they were running empty — then load it up with logs where the picnic area now is and haul the logs down.”

It takes an hour to drive because of the many potholes and bumps, twists and turns. “You’re not going to take a sports car down through there,” Campbell says. “You need a good sedan at least.” We drove a Prius and did just fine. 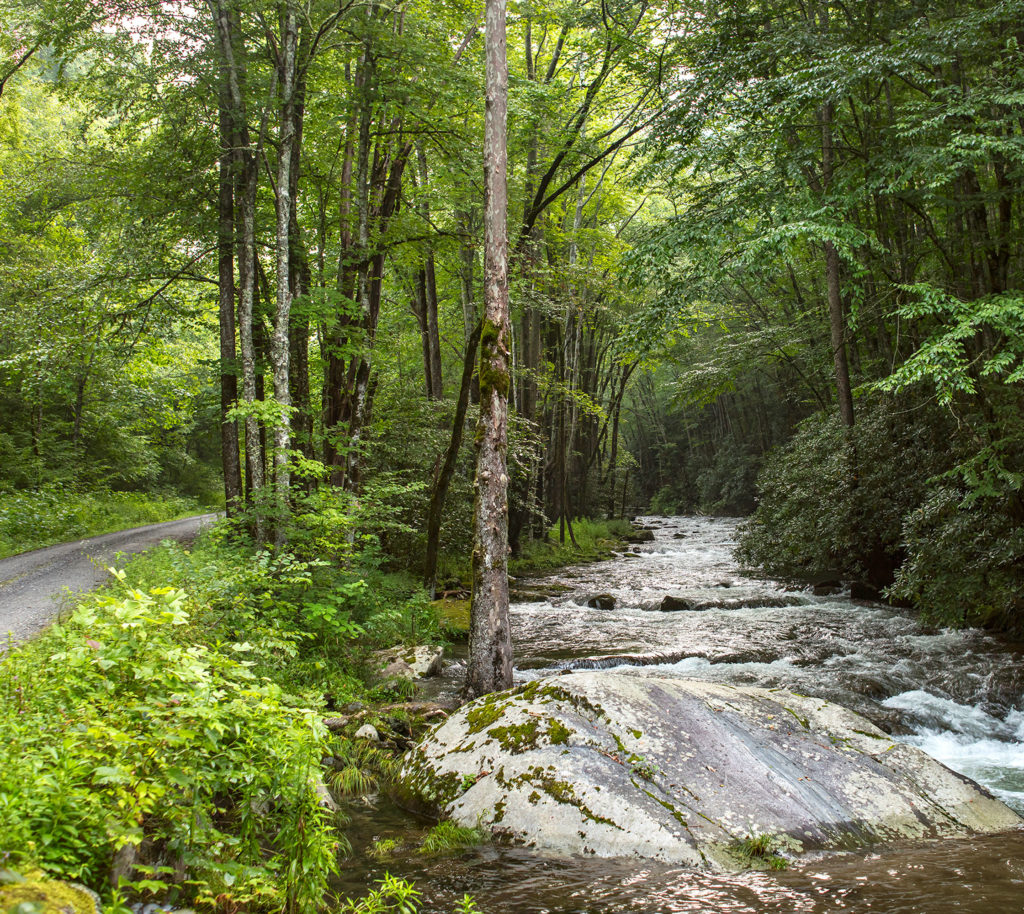 Heintooga Road runs beside, over, and around Bunches Creek on its 14-mile path through the Smokies. photograph by Jack Sorokin

We parked at a pullout at Pin Oak Gap and hiked in four miles along Balsam Mountain Trail, stepping over bear scat and a muddy wallow where wild hogs rooted, passing groves of rhododendron and mountain laurel and the occasional “gray ghost” of a hemlock killed by the invasive woolly adelgid. We spent a cold, star-filled night camping in an old stone lean-to, the Laurel Gap Shelter, before returning along the trail to “car-hike” the rest of the way to Cherokee.

It was the final day of the season and we had the road to ourselves, trees towering above, mountain streams tumbling below, the smell of the air fresh and clean. We stopped several times to absorb the quiet beauty. A carpet of ferns. Moss-covered stumps. A trickle of a stream cutting through the dense growth. Surely this is what writer and outdoorsman Horace Kephart had in mind when he described these remote corners of the Smokies as “the back of beyond.”