They brought cotton down this road, from Marlboro to Sparta, through the flat tobacco land carved out of tall, piney woods. The two-room frame house at the bend had always been there, and, by all accounts, had always been old. Whoever built it in the early 1800s had shaped the foundation and chimney bricks by hand, a coarse mix of hog hair, oyster shells, and mud from a creek near the Neuse headwaters.

When Henry Turnage, an infantry musician who had survived Pickett’s Charge at Gettysburg, added his rifle to the pile at Appomattox and walked all the way home to Pitt County, he surely came upon this house. Henry would leave again to teach school, and return again, traveling the same cotton road, passing the same house, its chimney smoke grazing the tops of the white cedars by the pond. Decades would pass, the better part of a man’s life in those days. Then, in 1892, when the 49-year-old bachelor finally decided to settle down, his young wife, Alice Jefferson Turnage, bought that farmhouse — larger by then; a dog trot connected a few new rooms — and the surrounding 260 acres for 72 bales of lint cotton.

There had been other owners all along, of course, and perhaps their great-great-grandchildren know who was born and raised in that house off of NC Highway 222, and what grew well in the fields. But when Henry and Alice Turnage took hold of the homestead, a new history began; the place was transformed, like Henry himself. A two-story addition went up, along with a slew of new gables, a wraparound porch, and a portico. Henry built a general store on the property, with a second-floor saloon that was roomy enough for dancing. After he opened a post office in the store, his neighbors’ mail came addressed to the new town of Turnage. For a time, there was even a clay tennis court on the front lawn.

Second and third generations came and went, and eventually, the house was rented out. Slowly, then seemingly all at once, the place fell to ruins. It had been tagged with graffiti and strewn with garbage by the time Henry’s grandson, Dr. Earl Trevathan, drove his elderly mother down the cotton road once more to the house where she grew up. 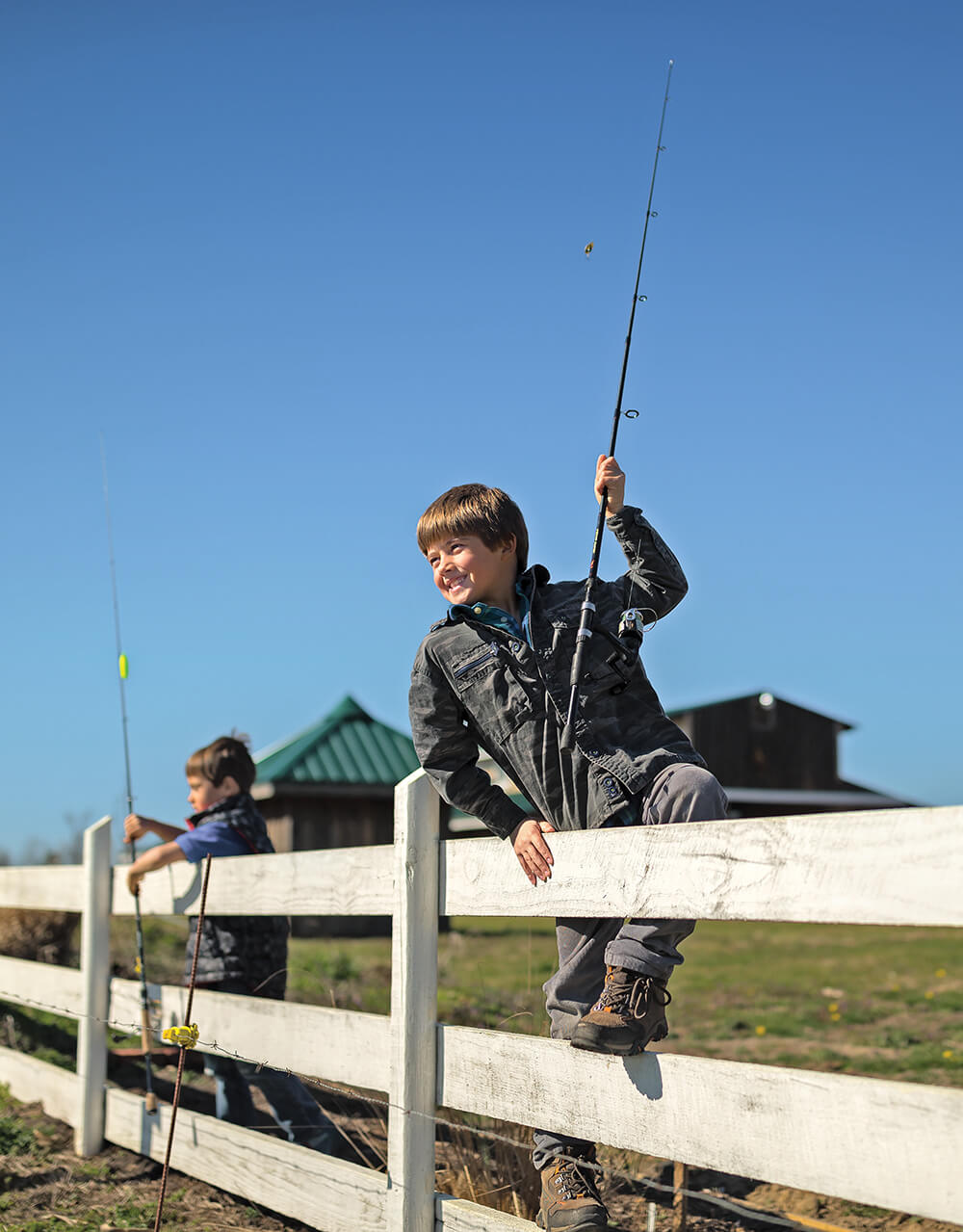 That’s what the two of them did on afternoons, Ethel and Earl, mother and son, at the end of her life. “I’d slow down at the bend in the road, and she would say, ‘Oh, someone should take care of this place! Wouldn’t you like to buy it?’ ” Earl says, enough years later to appreciate the irony of what was to come. “It didn’t mean the same to me then, and it looked like too much work, with it falling in. But the drive would get her started on stories. And oh, I heard these stories about a beautiful old place.”

At 93, Earl has “a dozen projects going at any time,” he says, and there are at least that many in progress on the homestead in Fountain right now. Ten years ago, with his mother’s pleas still fresh in memory, he heard that the old house was going to be torn down. It had never been his home — his cousins had lived there — but it was as familiar to him as his own: There, as a child with his hair combed flat for Sunday suppers, he’d listened to the old folks talk about the price of meat and tobacco. In high school, he rode his pony two miles down the cotton road to work the rows of bright leaf. “That will root you to the ground, working in these fields all summer,” he says. His father wanted his sons to know what it takes to run a farm, “so we wouldn’t want to stay,” he laughs. “I was ready to get to Chapel Hill.”

College led to medical school, and then a pediatrics practice in Greenville, a half-hour’s drive from Fountain, though Earl’s world had expanded far beyond the farm by then. Ethel — “Mucky” to her grandkids — burnished the Turnage family stories, telling and retelling them until age 103. But with her gone, and the house nearly gone, too, Earl began to wonder how his great-grandchildren would learn about Henry’s post office and Ethel’s banana cakes and the sundry relatives whose lives intersected at that bend in the road.

Earl’s elderly cousins still owned the original house, which hadn’t been properly occupied in 15 years, along with 100 acres. Buying it, Earl decided, would help preserve an era that was already slipping away. “I went in swinging a hammer on the cypress and pine log joists and found them solid as they come,” he says. The roof was another story, and his first order of business was putting on a new one. Still, the original pine floors — wide planks that life had stained the color of molasses — were strong and beautiful, and gave him hope for the rest. 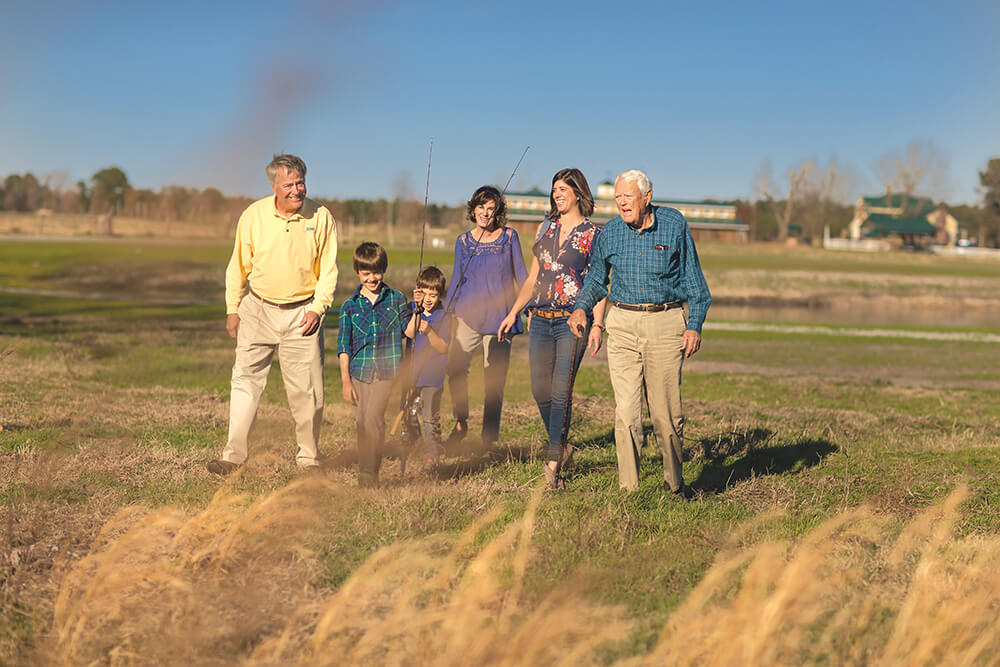 Soon, Earl’s Toyota Prius was a regular sight on the blighted property. The tall, snowy-haired octogenarian could be found there at all hours, hauling out cracked sinks and old toilets, brooming blackbird nests, and chopping out rotten sills. Tearing down what remained of the old store, he found two king snakes coiled inside, just like the ones Henry had once kept there to get rid of mice. Behind a bedroom wall, Earl found another reminder of his grandfather: a bottle of Star Whiskey.

“When he was nipping, my grandmother Alice would get so angry,” Earl says, sitting on the porch of the cabin he built from the remains of an old smokehouse and buggy house. He wears a brown suede hat and rests a hand on the cane he uses to steady himself on steps and bumpy paths. From here, he can watch the geese wing over his new pond, but he’s too restless, too eager to get on with his projects, to sit for long. Nosing his new Prius (his first one lasted 12 years) over the winter-yellow fields, he stops to examine some cypress saplings by the creek. He’s working with the Cypress Group of the North Carolina Sierra Club, which he and his late wife, Ruth, helped found, to restore the landscape to what it would have been in Henry Turnage’s time. “To protect the land is such a noble cause,” he says. “I can’t stand how we nibble away at it, abolish it.” He gestures out to the pasture. “Why not protect it, preserve it for everyone?”

“It’s all me now,” Earl says. “If Ruth were alive, we would have done this together. She would have had a fit about how much I paid for the roof, but she would have loved this.” Ruth’s death, a year before he bought the farm, was yet another reminder for the good doctor that life can feel both short and long at the same time: “When relatives start to die,” he says, bringing his hands to his lap, “you realize it could all be forgotten.”

And what’s lost isn’t just the fond memories, but also the hard truths, the secrets and struggles, and the complicated characters whose actions are as hard to fathom as they are to discuss. To Earl, family history is akin to medical history, which is why he finds it so endlessly fascinating. Family stories shape us — whether we want them to or not — and they color our worldview and influence our decisions. “It’s important that our survivors know us, and that we know our ancestors,” he says.

As warm and generous as the Turnage family could be, their narrative has its share of dark moments, too: There was Uncle Tom, who got into a fist fight with his brother Jim and accidentally knocked Jim over a balcony to his death. And Henry’s life story has gaps that Earl is still trying to fill in: “I believe Henry shot a man when he lived in South Carolina, but I’m trying to find out,” he says, ever the unflinching physician. Whatever facts he uncovers will go into one of the binders of family history that he keeps in the cabin, which has become a kind of museum for both the homestead and the people whose lives played out here. On the walls are photographs of the house and its residents in different eras: Ethel in 1970; a young Henry, with his bushy mustache, unlined face, and thin, clipped hair; Ethel’s older sister, Capitola, who lived at the homestead with her husband and sons until her death at age 33 of pneumonia. 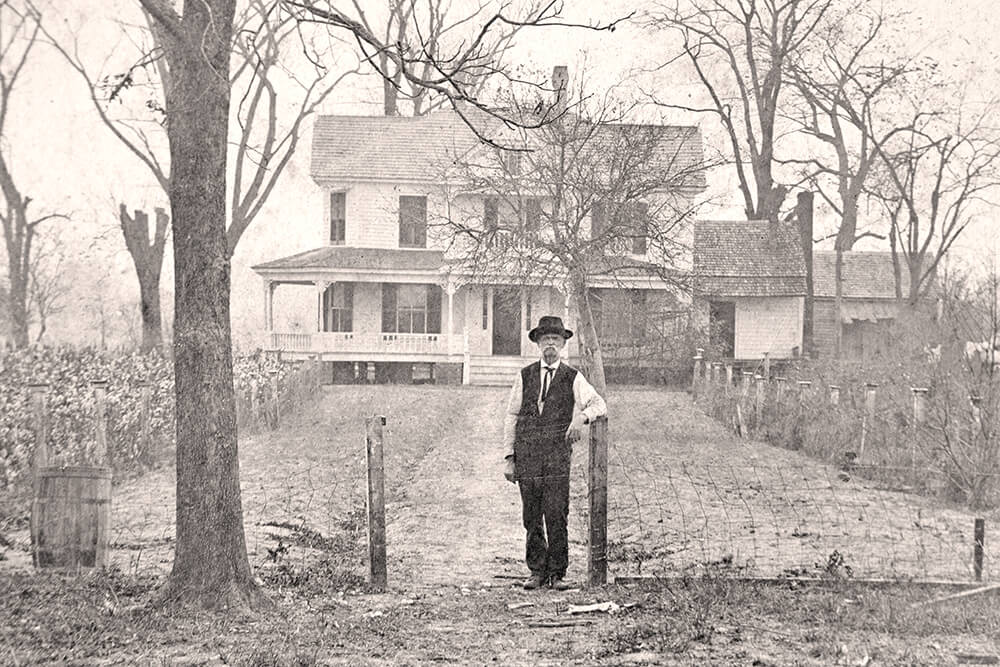 Henry Turnage (above) took great pride in the corn, beans, and tobacco grown on his land. Oak trees and native white cedars, too, once dotted the property. Now, Dr. Earl Trevathan, Henry’s great-grandson, is working with the North Carolina Department of Agriculture to plant 6,000 oaks and several hundred white cedars as part of a land restoration effort.

“I remember the telephone call,” Earl says. “It was late at night, and I heard my mother crying in the hallway. It was the height of the Depression. Dad’s Ford Motor Company [dealership] was folding and the cousins came to live with us.” While Ethel raised her nephews, Cap’s widower “courted teachers intently,” Earl says with a sly smile. When a new stepmother arrived at the homestead, the cousins returned to live with their father, the last in the family to call the place home.

Two young boys fish for perch in the pond now. When they come to the homestead, they first want to see the grapes. “I tell them the grapes only come at the end of the summer,” says their mother, Lauren Trevathan Daigle, “but they want to go check for grapes every time.”

This is what Earl wanted, even if he didn’t know it when he bought the old pile: another generation taking a run at the place. “I have to take advantage of Papa while I can,” Lauren says. “I wish I had soaked up everything Mucky told me years ago. My parents said to me in high school, ‘Please, please spend as much time as you can with your great-grandmother,’ but it went right over my head.” She remembers the long, hot drives, though, with Mucky behind the wheel of her boatlike Cadillac, gliding at a snail’s pace down the cotton road. At the bend, Mucky would point to an eyesore of a house and recount who had lived there, but the children in the backseat were too busy being children to pay attention.

Which is why, Lauren says, everyone in the family was surprised by Earl’s sudden purchase of the property: “When I heard Papa had bought Mucky’s old house, I thought, ‘Why in the world would he want it?’ He’d never mentioned wanting it. It seemed out of the blue.” But, in fact, it was in character: Earl hated to see special resources wasted. For years, he was known for salvaging tobacco barn wood before the fire department could put a match to it, as they often did until reclaiming it became fashionable. “As a pediatrician who made house calls,” he says, “I had an inside track on old barns.”

The whole family got a better understanding of what Earl was up to when, five years ago, he invited neighbors and family from across the country to “a sort-of debut party,” as Lauren calls it. The main house had been freshly painted a vivid yellow, but the rest was in various states of transition. Cows wandered between the sagging barn and hay bales; the flies were in their prime. Smoke from the pig roasting on the lawn drifted overhead as Earl, wearing an apron and a tall white toque, greeted his guests from astride a big red tractor. He was in his glory.

“He’s done so much already as an environmentalist and a doctor,” Lauren says. “But in some ways, passing this on to family is his ultimate legacy.”