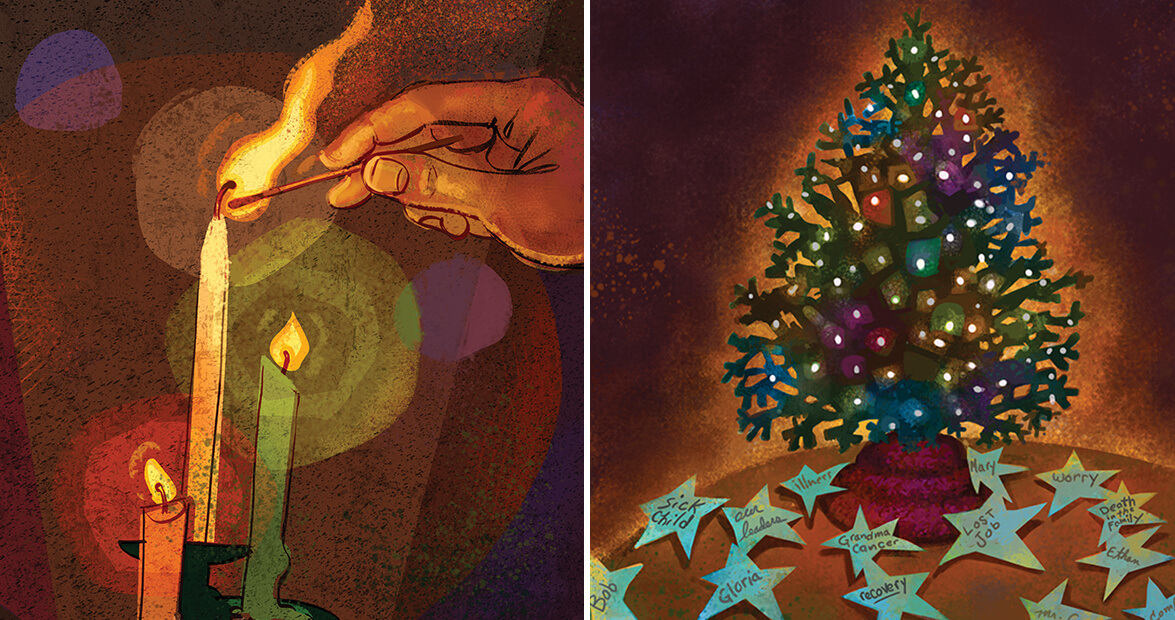 Even without seasonal decor, the church’s white walls and red velvet seat cushions echo the holiday colors of candy canes and Santa’s suit. But the tiers of poinsettias behind the altar announce definitively that it’s Christmastime. And yet, these signs of festive days to come don’t bring the intended joy to those gathered here on this cold December evening, still some days away from Christmas Eve.

My presence in this sparse crowd feels fraudulent and undeserving. Not because I’m not merry, — gladdened by the approach of Christmas, happily awaiting the arrival of family and laughter — but precisely because I am. And these two dozen strangers who have drifted silently into Peace United Church of Christ in Greensboro, in singles and pairs, cannot be.

They have lost a child, a parent, a job. They’ve suffered a natural catastrophe, or a devastating diagnosis. Or heartbreak.

For those among us who grieve, this season — which, for months, has been urging us to rejoice, to sing songs of sleighs and snow — only emphasizes that sadness. For them, “Blue Christmas” isn’t a familiar Elvis song, but a state of being.

In recognition of the sadness and quiet contemplation that often accompany the season, many churches have begun holding a ceremony of comfort, open to all. And what more appropriate evening near Christmas than December 21, this year’s winter solstice? Which, of all 365 days in the year, marks the shortest day of light, and the longest, quietest, coldest, darkest night. Long hours that are, for many, a dark night of the soul as well.

Tom Warren, Peace Church’s pastor, explains that the solstice has long held significance on Christianity’s calendar. Coincidence is debatable, but in the Catholic Church, December 21 is also the feast of St. Thomas the Apostle, who questioned whether Jesus truly rose from the dead, returning to redeem mankind. Fittingly, the opening hymn for this Longest Night service, accompanied by a simple piano, is “O Little Town of Bethlehem,” evoking images of still, shuttered streets. From that holy night, the congregation is transported to the darker night, some 30 years later, of Jesus’ crucifixion, when he pleads, “My God, why have you forsaken me?” — a question that, no doubt, my fellow worshipers have found themselves asking.

As a passage so often recited at funerals, the 23rd Psalm, with its calming lines, feels appropriate here. The service’s progression is thoughtful: The recognition of despair is followed by words of reassurance. And when it comes time for “O Come, O Come, Emmanuel,” there is a promise of the light of Christ approaching.

Four different pastors — though you’ll hear no preaching, no admonishment to be kind, to help others — assist in the service. Between verses, three candles are lit: The first is in recognition of those “whom we have loved and lost … their faces, their voices.” The second is for “the pain of loss — loss of relationships, loss of trust, loss of jobs, loss of health, loss of faith, loss of joy.” The third flame is to lay before God “the sharpness of memory, the sadness and grief, the hurt and fear …”

That which so many grievers fear — the request to stand, to explain, to expose their trouble — has no place in this public service for private sorrows. Instead, the congregation is invited to come forward, pen their trouble or the name of a lost loved one on a paper star, and place it beneath a small tabletop Christmas tree. Nearly everyone rises and wordlessly does so. One woman returns twice. It’s a moving and humbling moment for a fortunate someone whose greatest tragedy this year was the death of a beloved pet.

And somehow, suddenly, the holy child has been born, and we’re singing “Away in a Manger,” giving voice to the uplifting lines of the 121st Psalm: “My help cometh from the Lord.” As simply and as solemnly and as quietly as it began, the service ends, with a traditional blessing by the minister. The congregation, now strengthened, files into the crisp night. It is a moment that reflects the reason for the season far more than any glittering tree or Santa cap ever could.

Merriment can’t simply be put on, donned like gay apparel. Rejoicing can’t be required. Joy isn’t always contagious. At Christmas, when God and sinners are reconciled, loss cannot be. But it can be acknowledged at Longest Night services. Through that acknowledgment, comfort can be found, and for those who struggle this season, the longest night is made a bit shorter.