Cars used to line up here to cross over from the mainland to the little island. Filled with vacationers and locals, “bug hunters” and boaters, they were all heading to Holden Beach for different reasons. They still do, now driving over the soaring bridge across the Intracoastal Waterway. Just as they approach the bridge and the start of their beach vacation or fishing vacation or reunion vacation, they pass a local icon. A place where people stop to find out what’s biting and where to find it, to top off their coolers with ice, or just to catch up on local gossip. 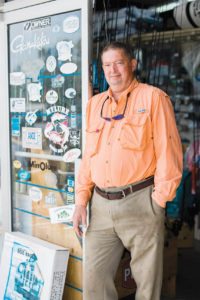 “You never know what’s going to come through that door,” says Rick Gravitt, a licensed boat captain who for the past 10 years has shared his fishing expertise with customers at The Rod & Reel Shop. It’s a must-stop for those headed to the surf, the inland shores, or the fish-rich waters off one of the last “old-school” beaches in North Carolina.

Hunter McCray, owner of The Rod & Reel, runs his shop the way he always has, catering to old friends and complete strangers, many of whom walk into the shop with the darndest questions.

“It could be anything,” he says. “People come in here wanting to know what live bait to buy or what artificial lure is hot. Or they might walk in needing advice about how to fix a generator. Or maybe they just want to come in to complain about some legislation or regulation. Whether it’s fishing or politics, you better have the answer.”

The Rod & Reel Shop has been right there on the side of Holden Beach Road since 1971, and McCray has owned it since 1986. It’s a charming little bait shop that is so much more than just a bait shop. It’s part general store and part post office, a gathering spot on cold mornings, a place where fishing boat captains come for bait or tackle and others come looking for the latest weather updates.

Some just come to talk to McCray and his staff of shopkeepers, who have encyclopedic knowledge of the island, its history, and its traditions. They can tell you which way the wind is going to blow that afternoon, the temperature of the water, the tides and moon phases, and where the dangerous shoals have shifted. 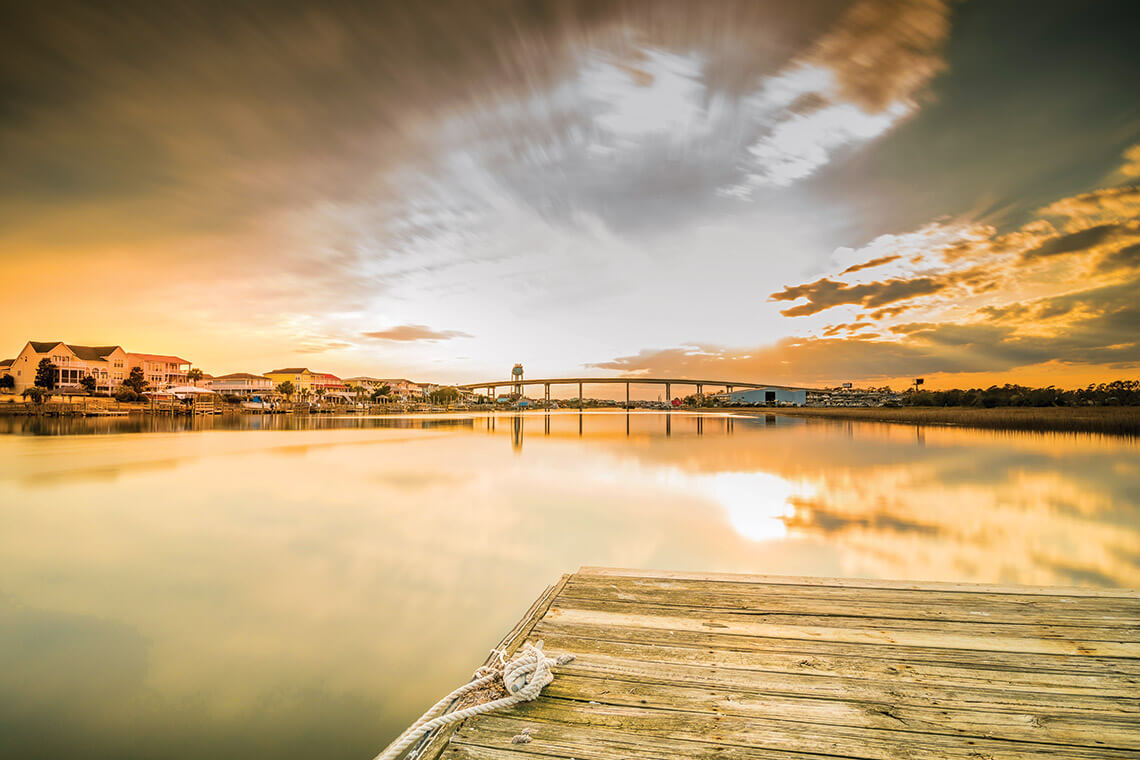 The Holden Beach Bridge is the sole link to the mainland for the island community. photograph by Matt Ray Photography

The Rod & Reel Shop is a breezy little place with people coming and going, asking anyone and everyone for advice.

Folks come here for reassurance, especially in uncertain times. In a little place like Holden Beach, which only has 575 year-round residents, they come here for vital information about day-to-day life. They come because they know it will be the same place it was yesterday, and it will be that way tomorrow.

They also come here just to tell and to listen to stories and tall tales.

“A lot of lies come out of that little shop,” Alan Holden says. “There’s very little truth coming out. It’s the place where fish go to grow. You walk in with a six-inch fish, and by the time you walk out, that fish is six feet long.” 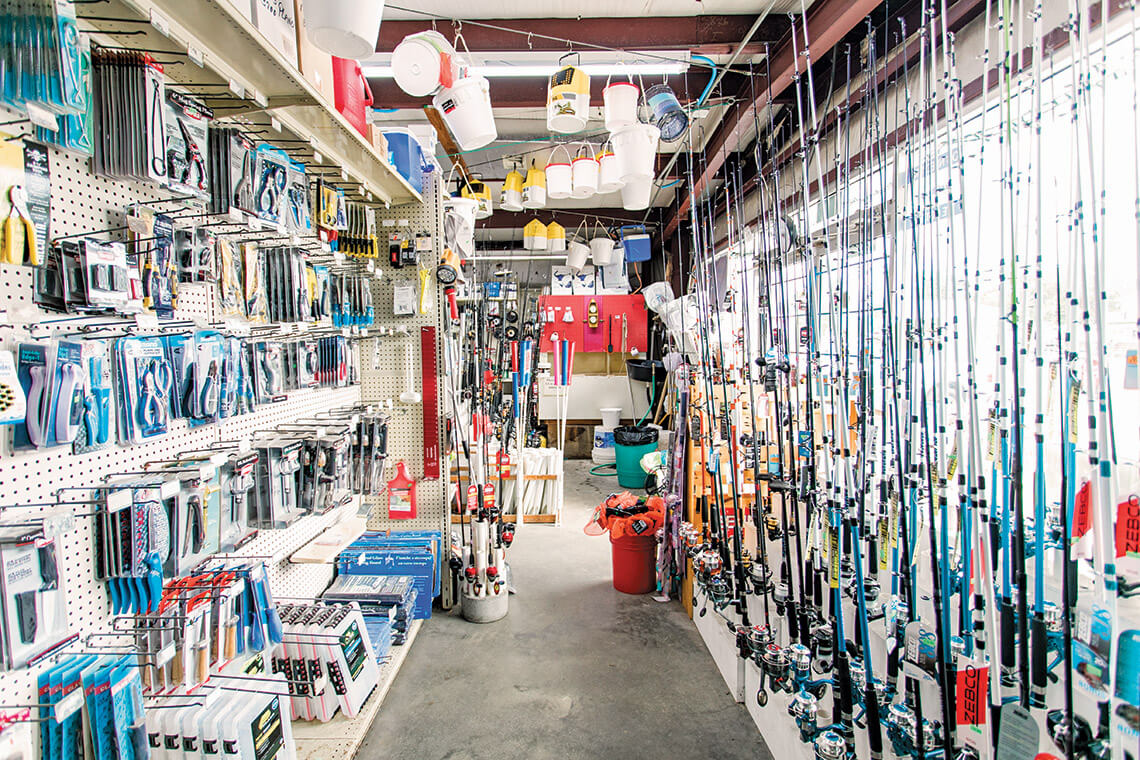 Bait buckets, sinkers, and the shop’s eponymous rods and reels are one reason anglers visit. photograph by Matt Ray Photography

Holden — a seventh generation of the founding family — is the mayor of Holden Beach. He says that the town is, in many ways, exactly as it was when it was incorporated in 1969. “We’re more famous for what we don’t have,” he says.

You still drive onto the island the same way that past generations did. There’s one way on and one way off of Holden Beach: the bridge. No, it’s not the rickety original or even the iconic swing bridge that disappeared in 1986 when the massive man-made promontory opened, forever taking away some of the charm of the island.

Holden Beach has long held that charm against time and tide, resisting commercialism and marketing itself as “the family beach.” Change is something that comes slowly to this idyllic barrier island.

Folks here like to see things stay the same, whether you’re a resident of Holden or one of the thousands who flock here in the summer, returning to beach homes and rental properties and the unspoiled nine miles of sand from Lockwoods Folly Inlet to the west to Shallotte Inlet to the east. (Yes, this island faces south, a quirk of Brunswick County that makes the islands veritable beachheads for storms blowing in from the sea.)

Many people say that Lockwoods Folly Inlet is filled with ships that ran aground, piloted by Civil War captains and others assuming that the “Graveyard of the Atlantic” was farther north, safely away from the quaint little cuts and sloughs that make for great fishing but treacherous boating. The boats here remain where they sank, including the famous Southern Lady, a shrimp boat that lists portside below the bridge, bobbing in the Intracoastal Waterway like a ghost ship — or, as the locals call it, “a nuisance.”

Used to be, shrimp were locally called “bugs,” and shrimpers “bug hunters,” another example of a little place stuck in its own time — not the past, just its own pastime.

Inside The Rod & Reel Shop, they don’t refer to shrimp as bugs, though. For one, Bo wouldn’t understand at all. That’s Bo, short for Bowie. Or maybe it’s a mispronunciation of “buoy.” There’s a running conversation between McCray and his wife about the origin of the name of the German shepherd that’s part of the shop.

In fact, many think Bo runs the place. And his favorite thing? Shrimp. “He loves shrimp,” McCray says. When Bo hears the word, a customer suddenly feels his warm and fuzzy snout as he edges into the conversation, unconcerned with the pearls of wisdom about water conditions or the history lessons about the bridges or speculation about the fate of the Southern Lady.

The lure of The Rod & Reel has always been the comfort and consistency of the place. Folks come for the news of the day, as they would in any small-town gathering place. They come to see McCray and his staff. Or maybe they come to see Bo. No matter what, they come for the bait and stay for the conversation.