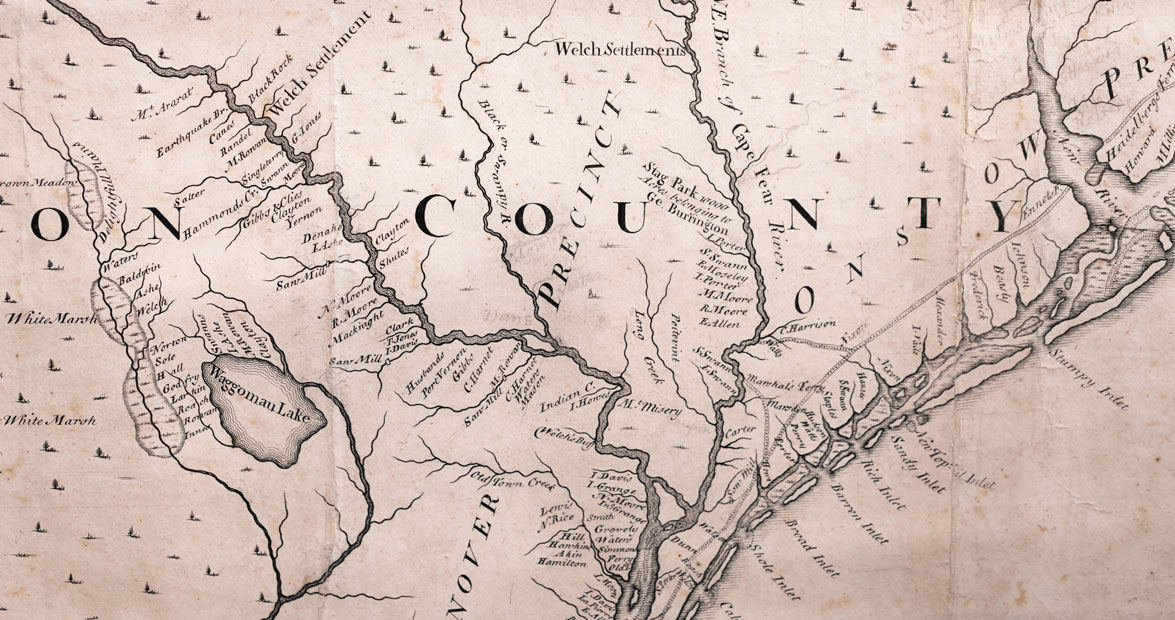 The unmistakable shape of the state’s coastal region — the sounds, the rivers, the porous peninsulas, the pointed capes, the string of barrier islands — is all there in ink on yellow-white paper. The names are familiar, too: New Bern, New Hanover, Cape Hatteras, Beaufort, Bogue Sound. And there are familiar names with weird spellings: Pamticoe (Pamlico) Sound, Woggomau (Waccamaw) Lake, Neus River, Charokee. Sure, the Outer Banks could use some tweaking, and the Deep River mistakenly flows into the “Pedee” River instead of the Cape Fear. But even if you only have a bare-bones grasp of North Carolina geography, you can still appreciate the accuracy of this nearly 300-year-old map.

In 1733, Edward Moseley created “A New and Correct Map of the Province of North Carolina.” It covers a wide sweep of territory, from the Santee River delta in South Carolina up to southern Virginia and west to the Piedmont. The mouth of the Cape Fear below present-day Wilmington is nearly spot-on, with the coast making a sharp westward turn and the cape thrusting like a dagger into the sea.

Only three of Moseley’s original 1733 maps are known to exist in the world. Two are kept in England: one in Britain’s National Archives in London, and another at Eton College. The only map in America, and the one likely owned by Moseley himself, is framed on the wall of the Special Collections room at East Carolina University’s Joyner Library. It’s roughly 5 by 4 feet, with one inch representing about five miles. Written in nine lines between the “Pedee” and Cape Fear rivers is this passage:

“This Country abounds with Elks & Buffaloes at the distance of about 150 miles from the Sea & the whole affords plenty of Deer, Swine, Bever, wild Cows & Horses. Also, Turkeys, Partridges, and all sorts of water-fowl, with abundance of Swans.” 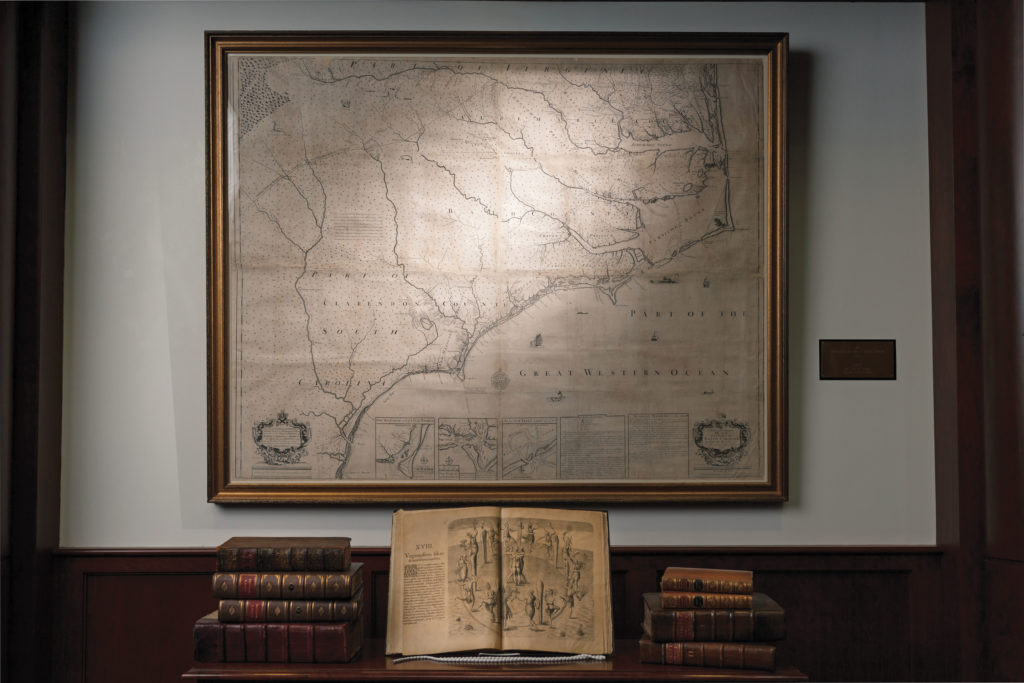 This Moseley map, one of three known to exist, is on display at the Joyner Library at East Carolina University. photograph by Jerry Wolford & Scott Muthersbaugh

The map is marked not only with place names, but also with the names of families dwelling in those places. Follow the Meherrin and Chowan rivers, for example, and you’ll see the surnames of people who were living along the banks: Anderson, Bryan, Kirchin, Williams, Cotton, Dew, Gee, Pollack. Those names still resonate today, says Ralph Scott, the curator of printed books and maps at ECU. “People will come in and say, ‘Oh, I know who that is.’ ”

Edward Moseley was a planter, a chief justice, a book collector, and a politician. He was also the surveyor general of the Carolina colony in the first decade of the 1700s. John Lawson, who had famously explored the Carolina backcountry and written a book about it, succeeded him. The northern half of the colony evolved separately from southern Carolina, developing a culture of small tobacco farms rather than expansive plantations, and it had far fewer slaves. So in 1712, given their different geographies and economies, the two regions split and became their own colonies.

In 1723, Moseley again became the surveyor general of what was by then called North Carolina. “He was a very extensive landowner in eastern North Carolina,” Scott says. “So of course he was interested in measuring his land to make sure he got it recorded correctly.”

That led to his surveying the region for his “new and correct” map of North Carolina, aiming to improve upon John Lawson’s 1709 map with greater detail. Moseley and his team used compasses, clocks, and likely a sextant, a tool that uses angles and mirrors to determine latitude and longitude. A critical instrument for 18th-century surveyors was the Gunter’s chain, which measured distance on the ground: One chain, with its 100 links, stretched 66 feet.

Moseley sent his ink drawings to London to be engraved and published. What the map fails to show is the boundary between North and South Carolina; that wasn’t added until a couple of years later, when he served on a commission to fix the border. An updated map from 1737 does include the line, extending northwest from the Little River.

Today, smaller prints of the map are sold for $25. “People buy them and give them as gifts,” says Rachel Becton, a development officer for Joyner Library. “It’s a point of pride.” Yet the original map, now hanging at ECU, was once much harder to find. It vanished from public view in the mid-19th century, but resurfaced in 1982 in the attic of Wessington House, an antebellum mansion in Edenton. The homeowner at the time said the map had been in the family for several generations and donated it to ECU.

Nearly 300 years after it was drawn, the map shows a North Carolina we still recognize: the tentacles of Albemarle Sound, the writhing ways of the Tar and Roanoke rivers, the jutting coastline. Edward Moseley put the infant colony on paper, giving it shape, demystifying it, making it feel like home.