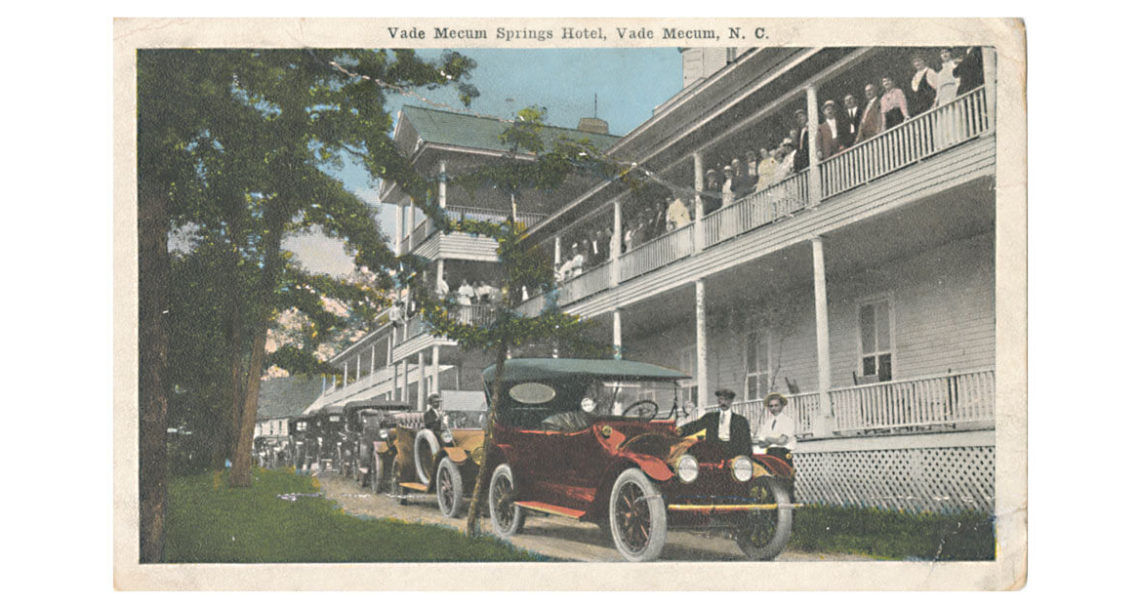 John Sparks, a circus owner and the operator of Vade Mecum, a grand mineral springs resort in Stokes County, died in 1903 of injuries suffered in a lion attack. A lot has happened on his hilltop property since then, but when you talk to locals today about Vade Mecum, you’ll hear the tale about the lion. That fact says something about our fascination with circuses and strange history, of course, but it also reveals the power of stories to bind people to a place, and to inspire them to fight like hell to preserve it.

Sparks ran a three-railroad-car circus that toured the South in the 1890s. During a swing through North Carolina, the Pennsylvania native formed a partnership with businessmen from Winston-Salem and opened a resort that soon attracted the Piedmont elite.

“There is no more beautiful, picturesque spot on the globe” than Vade Mecum Springs, one early visitor insisted. That, surely, was an exaggeration, but the resort had much to recommend it. Two large hotels dominated the grounds, while those seeking privacy could rent one of the 20 homes on Cottage Hill. Just downslope was Diamond Lake, where the resort offered boating, swimming, and, for the adventurous, a thrilling “toboggan plunge.” “Burro parties” were arranged for those who wished to ride to the top of nearby Moore’s Knob, now part of Hanging Rock State Park. The smaller of the resort’s two hotels, graced with a fine ballroom, was favored by “the young and giddy,” a newspaper reported, while the larger housed “older and sick people.”

That latter group came for the water.

At the time, North Carolina was home to a couple dozen mineral springs resorts, all touting their healing properties. The resort’s curious name was itself a testimonial to the water: Vade mecum, Latin for “go with me,” was once a common term for a handbook — The Physician’s Vade Mecum, for instance — small enough to be carried in a pocket. The phrase often referred to items carried at all times — money, medication — and, therefore, came to mean “indispensable.” That’s what Sparks had in mind: A resort brochure claimed that “to thousands, this water is indispensable.”

The water was bottled and shipped across the South — “Vade Mecum water continues to make its way into the hearts and homes of the dyspeptic population of Charlotte,” according to a 1901 Charlotte Daily Observer ad. But many preferred to follow the water to its source, a creek-side spring on the resort grounds. Advertisements claimed that the water was “the ideal combination of tonic, laxative, diuretic, blood purifier, and restorative nervine,” and offered a testimonial from a minister describing the water as “a marvelous manifestation of the Divine love, providing for the relief of human suffering.”

The ads make clear that the circus and mineral water businesses had at least one thing in common: Both required extravagant puffery — especially considering that Vade Mecum’s sulfur-tinged water “would gag a goat,” according to Thad Woodard, who once tried it (more on him later).

Sparks, though, genuinely loved the place. He built himself a house at Vade Mecum and announced plans to breed and train circus animals there. To get that project started, Sparks had two young lions shipped to the property. He was petting one of them when it badly mauled his arm. A few days later, on January 28, 1903, he died of an infection.

Sparks was buried in Pennsylvania, and his lions were shipped back to the circus. But the resort and the legend survived. 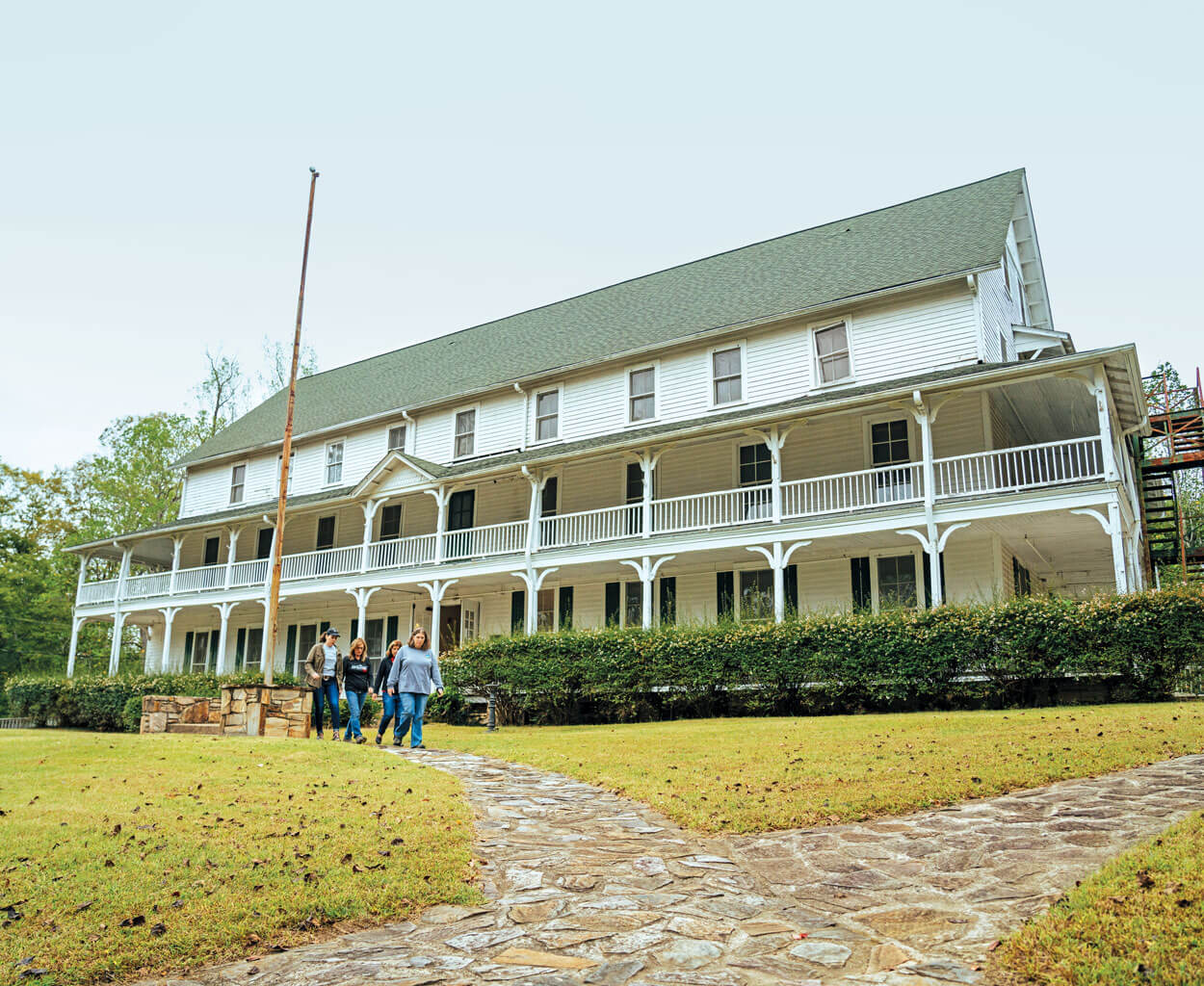 Members of Friends of Sauratown Mountains, a volunteer group in Stokes County, are working to preserve and restore the Vade Mecum property. The once grand hotel is now owned by the State Parks Service.

One afternoon in 2013, Debbie Vaden heard a rumble that sounded like bulldozers at Vade Mecum. “They were logging the property,” she says. “Just clear-cutting some areas.” After a career as a nurse in San Diego, Vaden had returned home to Stokes County to tend her family’s land. Vade Mecum, in fact, had once been part of that family land: Her great-grandfather had sold the property to Sparks and his partners.

Vaden knew the history intimately. After Sparks’s death, the resort thrived for more than a decade, but it faded after a 1920 fire destroyed one of the two hotel buildings. The Episcopal Diocese of North Carolina took over the property in the 1930s, preserving the surviving hotel and eventually building a chapel, gym, and cabins for campers. In the 1980s, North Carolina State University’s 4-H program assumed control with help from Sertoma Clubs.

The camps had been careful stewards of the property, which made the logging all the more surprising. Vaden soon learned that NC State had sold the cleared timber and shuttered the 4-H camp. The property would be sold. She called friends and neighbors, and together they wrote emails and pressured politicians. They met with almost immediate success. In the summer of 2014, the state legislature halted the property sale and transferred the land and its historic buildings to nearby Hanging Rock State Park.

Vade Mecum was saved. Vaden and her colleagues rejoiced. Little did they know, the struggle was only beginning.

“I know they get frustrated at how slow we’ve been to get things going,” says Carol Tingley, deputy director for the NC Division of Parks and Recreation.

“They” refers to Vaden and other members of Friends of Sauratown Mountains, the volunteer group that supports Hanging Rock and Pilot Mountain state parks. They’re disappointed that, in the nearly six years since North Carolina State Parks took over Vade Mecum, the agency hasn’t been able to do much to improve the property. The volunteers, meanwhile, have staged open houses, raised money, hired caretakers, and arranged for mold remediation — all in a somewhat frantic effort to stave off the rot that afflicts unoccupied buildings.

The park system does face a difficult task. In Vade Mecum they had inherited both a wonderful resource and an enormous headache: glorious, irreplaceable structures in dire need of expensive renovations. The gym, built by the Episcopalians in the early 1930s, is a soaring barn of a structure, with high ceilings, a giant fireplace, and big gaps in the siding. The three-story resort hotel, built in 1902, is clad in white clapboard with porches stretching the length of the first two floors. Inside, beadboard walls and ceilings need a new coat of paint. But the stench of mold — the legacy of a burst sprinkler pipe — is clear evidence of the pricey renovations that await.

The NC Division of Parks and Recreation plans to turn Vade Mecum into an event center and campus that will host music festivals, conferences, and weddings. But before the money starts rolling into the local economy, millions will be spent to update the buildings and grounds. The master plan for Vade Mecum includes a first phase projected at $4.6 million. The project has been awarded $2.1 million in Connect NC Bond funds, and it may get another $1 million in the 2020 state budget. Design work is expected to start soon.

“The whole tourism industry at the turn of the 20th century is represented here, and not very much of that has survived anywhere else,” Tingley says. “It’s an extremely valuable property — but it’s an expensive restoration.” 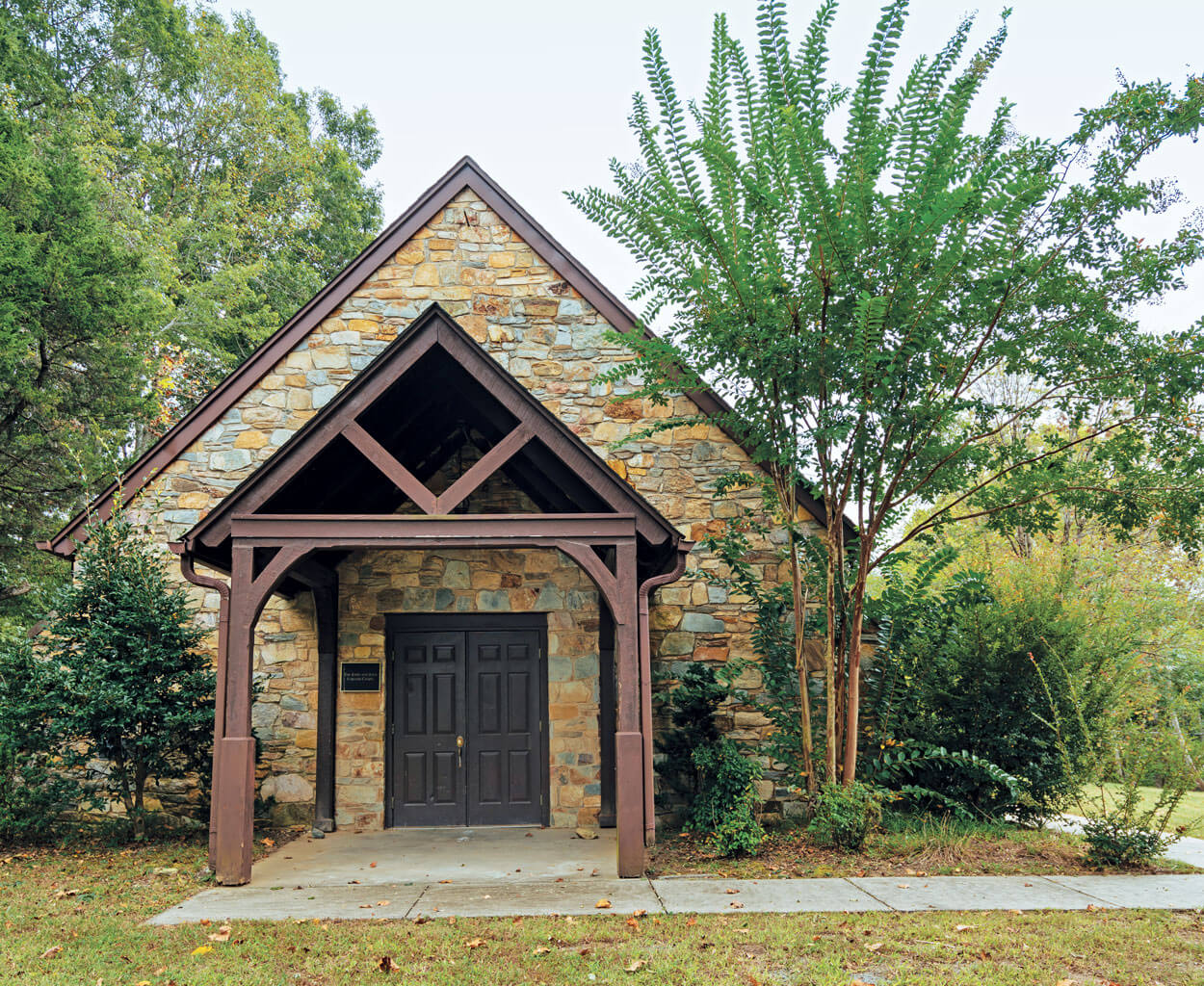 The stone Episcopal church, built in 1949, remains in good condition thanks to efforts by Friends of Sauratown Mountains.

Thad Woodard, who camped at Vade Mecum during the Episcopal years, has returned to the property as head of the NC Bankers Association to donate money and time. (It should be noted that once — only once — he tasted the water.) Woodard understands state politics well enough to be realistic. Despite the main building’s beauty, he frets over all the work it still needs. “While you wait for the politicians to give the money,” he says, “it will fall in.”

It’s clear, though, that Woodard won’t let that happen. When he starts talking about his time as a camper, his face lights up with a grin, and in a lovely, scratchy bass, he launches into “The Mecum Cannonball,” a song about the camp station wagon: She’s a mighty purty engine, hear all them campers squall / Ridin’ down the highway in the Mecum Cannonball!

“It’s an extremely valuable property — but it’s an expensive restoration.”

Summer camps inspire lasting devotion. Janis Henderson-Hunsucker, now an art teacher at North Stokes High School, fell in love with Vade Mecum while working as a 4-H counselor. “I came from a divorced family, and I really wanted to belong,” she says. “When I came here, I felt that sense of belonging — summer camps are like tribes.”

Vaden feels that tribal pull as well, not for summer camp but for her ancestral land and the tales she heard growing up. “My grandparents told stories about how they would hear the elephants trumpeting and the lions roaring,” she recalls. “Whether that’s really true, I don’t know for sure.”

Truth be told, it’s probably not. Steve Shelton, a retired band director and Vade Mecum’s unofficial historian, has dug through the newspaper archives and found no evidence that circus animals — other than those fatal lions — ever arrived at the resort. But that doesn’t stop the stories. “It’s just the kind of thing you want to believe,” he says.

When Henderson-Hunsucker was a 4-H camp counselor, she transformed the story into a scary campfire tale. “We’d tell the kids, ‘There’s the ghost of a lion — you’d better not sneak out of that cabin because the lion’s gonna come and eat you!’ And the children would scream.”

She remembers fondly those rowdy, carefree camp days as she walks the empty trails that snake around the property. “When I’m here, I hear the echoes of children playing,” she says. “It’s too quiet now.”

Someday, somehow, the money will come together, she believes. The old hotel will be renovated, and the children will return to Vade Mecum. And at night, as they burrow into their sleeping bags and drift off to sleep, they might just hear the roar of a lion.